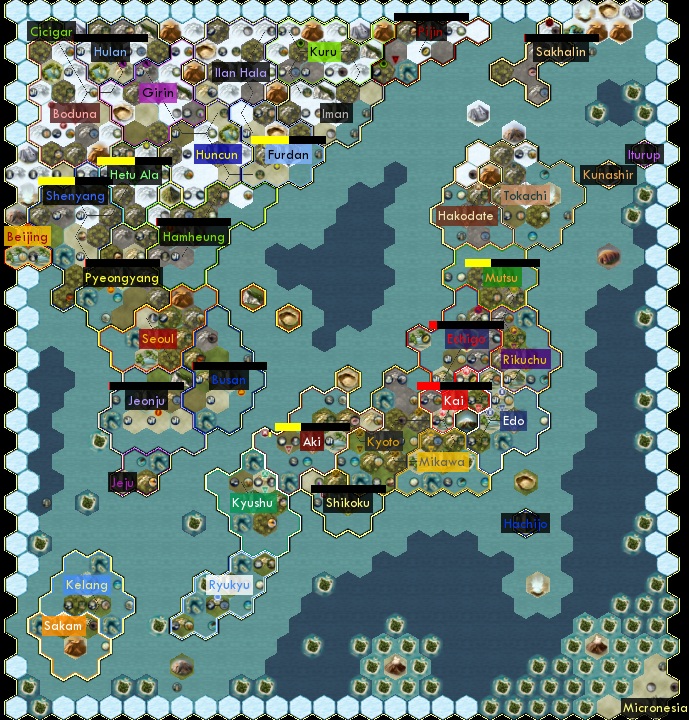 * It is made by Vanila World Builder. So you don't need to install any MODs.
(But I Highly recommend to use of [[ERAS-Industrial Age]] MODs~~)

* Made by Vanila World Builder, there are many reusing of Civs and
City-states...

* All Blank tiles are below to Micronesia(City-state).

* After Start, each Civ was given special unit but can't produce them.

* After start, Each Civ has specific diplomatic status.

* AI Difficulty is VERY HARD(GOD). Do not hesistate to use the Luxury Fraud strategy. (This map is harder than EU 2.58 map!!!) 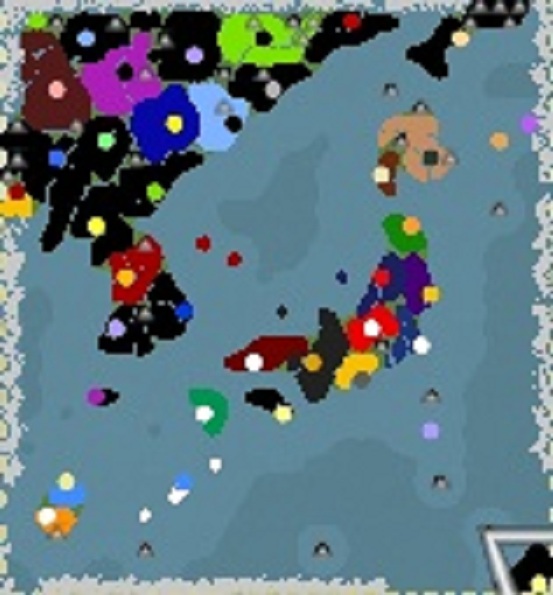 L 1st turn, before the application of triggers. 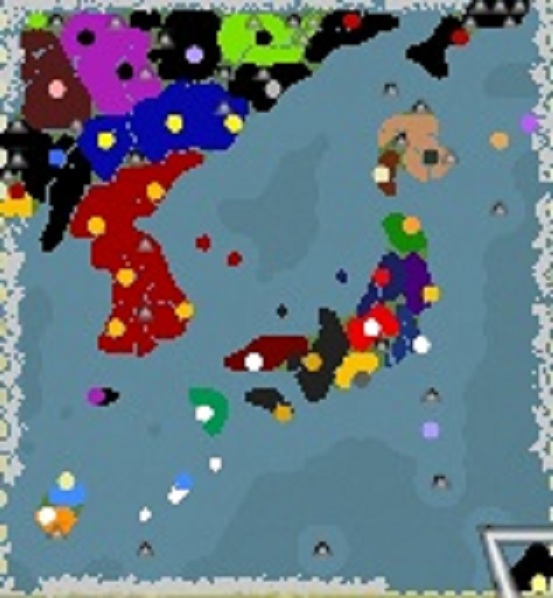 L 2nd turn, after the application of triggers.

< Playable Civ [Original Civ] / Difficulty >
: If there were same Civs, they will be chosen by order.

1. Joseon [Korea] / Normal
: Except Ming, Joseon is local Superpower. But geographically hard to expansion & doesn't have many luxuries. Joseon's Army & Navy are strong in local territory but weak in foreign territory. So as time goes by, relatively be weaken than other rivals. Encourage war between rivals and see the chance to expansion.
In case of AI control Joseon, Joseon will be Final Boss with Qing.


2. Haixi [Huns] / Very Hard
: Having war with Qing, so very hard to survive. AI Qing will conquer 3~5 cities and it will be difficulty of Haixi. Bring other countries to war against Qing and wait good attack chance.


4. Qing [Huns] / Very Easy
: Having war with Haixi, Ming and Ming's ally City-states. Qing can't make peace with Ming. Qing's development level is very low but their cavalries are invincible. Give up dilplomacy & administration, conquer everything.


5. Shimazu [Green Japan] / Hard
: Having infinite war with Ryukyu. Their Musket Wako is so good for attack. But local tiles are so poor. Watch out Hashiba or Mori clan's attack and prepare expansion.


6. Date [Purple Japan] / Very Hard
: No place for expansion. His neighbor Uesugi is good for attack, Hojo is good for Defense. Developing and Waiting chance to expansion. Nanbu, Hakodate and Hokkaido will be good place to go.


7. Tokugawa [Yellow Japan] / Hard
: Territory opened with Hashiba. Tokugawa Ninja can converse defeated enemy units. But It's weak at first, so you must get iron and upgrade it to Samurai. Someday Hashiba will attack you. Until then develop and reserve power to counterattack.


8. Mori [Burgandy Japan] / Hard
: Having infinite war with Hashiba. Buy wall and retreat Hashiba's army. Bring more clans to war. If you overcome the first crisis, unifying Japan is yours.


9. Hojo [Navy Japan] / Normal
: Having war with Uesugi. Hojo Spearmen are strong in local territory. Uesugi Cavalries are good for attack but their capital's HP is very low. Kill them in your territory and go for counterattack.


10. Uesugi [Blue Japan] / Normal
: Having war with Hashiba, Hojo and Nanbu. You can conquer Nanbu in 3 turns. Buy wall in Echigo and wait Hojo and Hashiba. Bring Date to war is good choice. After beating them, Unifying Japan is so easy.


12. Hashiba [Black Japan] / Very Easy
: Hashiba Teppo Ashigaru is overpower. No match rival in Japan. But Japan is small so you can't overwhelm Qing's army or Joseon's science. Unify Japan quickly and go to continent.
Japanese Army is so powerful but it is limited in Japan Islands. It will not match to Qing's massive army or Joseon's high-tech navy. Just Managing Islands is not enough to catch them up.


13. Korchin [Mongol] / Very Hard
: Snowy icy land. Their army is strong but no dream, no hope. While Haixi taking Qing, conquer Haixi's cities and Bring Yeren, Joseon to the war.


14. East India Company [Netherlands] / Easy
: Having infinite war with Middag. EIC's Science level is the second.(The first is Ming) But their population is very low and food isn't enough. Conquer Middag and expand to Ryukyu or Kyushu. Recommend to Buying units & buildings than Building.


16. Ryukyu [White Polinesia] / Very Hard
: Having infinite war with Shimazu. No place to expansion. Defending Shimazu army, Bring other Japanese Daimyos to retreat Shimazu. The most important thing is, Your army must conquer Kyushu.


17. Ainu [Inca] / Easy
: Having war with Kakizaki. Kakizaki has Samurai but you have only a Jaguar Warrior. Upgrade it to Swordman and using City shot actively. Conquer Hakodate and go further to Sakhalin, Pijin, and Japan. Should control food production for tech-level race. Someday you should oppose Hashiba Clan. Prepare enough army for Japanese Daimyo.