I saw a similar bug report, but that one seemed to be an all-or nothing problem whereas I'm getting it in some cities and not others. Also the fix that was recommended in that thread requires the Steam version of the game. I'm running the Epic Games version of the game so I can't enter the code to unlock the legacy version.

I have founded a religion with Jesuit Education. This religion is in all except 1 of my cities. My government is Theocracy.

In theory I should be able to buy the following using faith:

In practice the district buildings don't show up in any city, and the military units show up in 2 of my 17 cities, (one without my faith in it, and one that is occupied. I'm not sure if these things matter.) 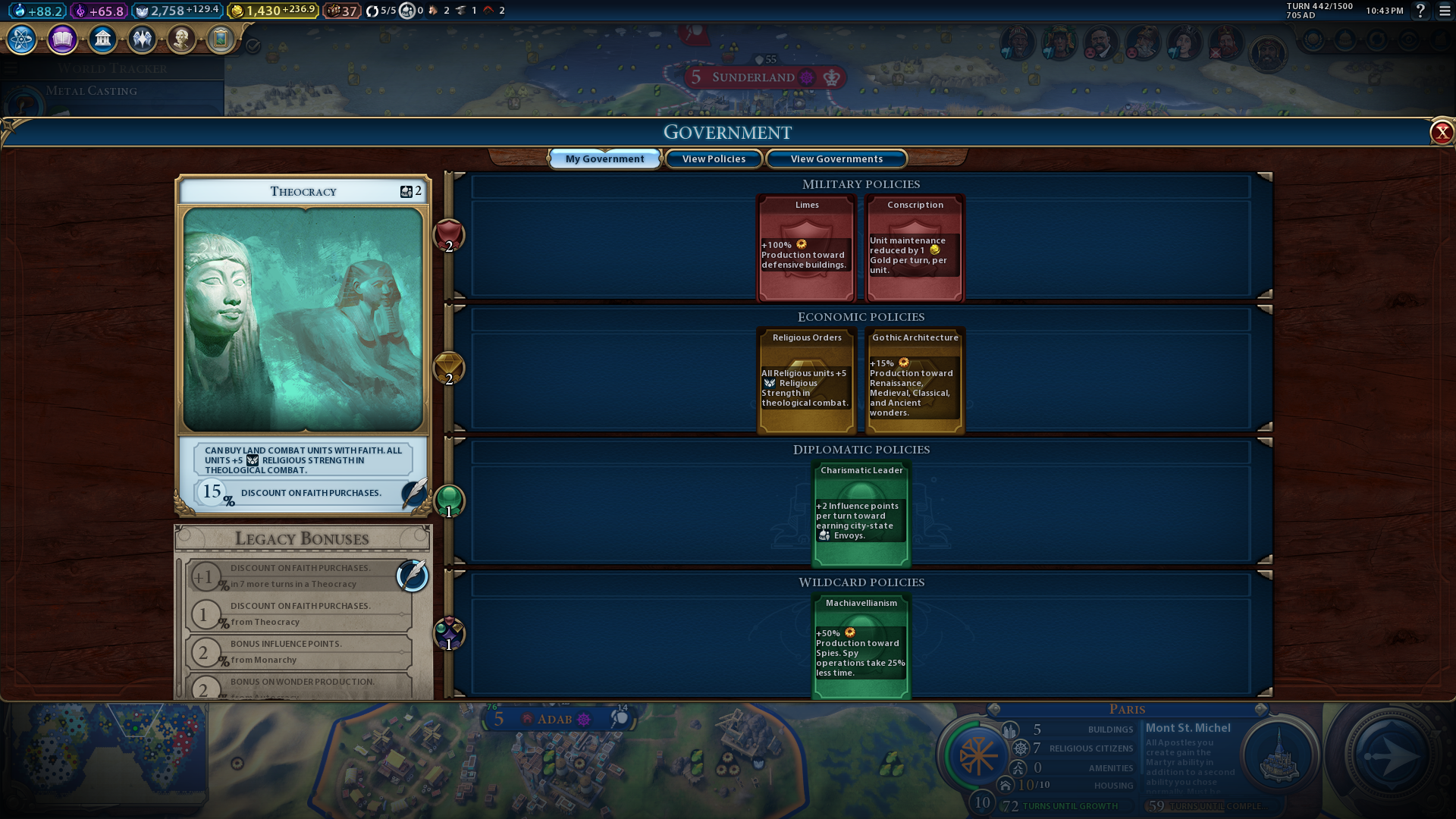 Berlin: Has shrine and temple, can make religious units... but not military ones. (Doesn't have a campus or theater square so it shouldn't be able to buy buildings.) 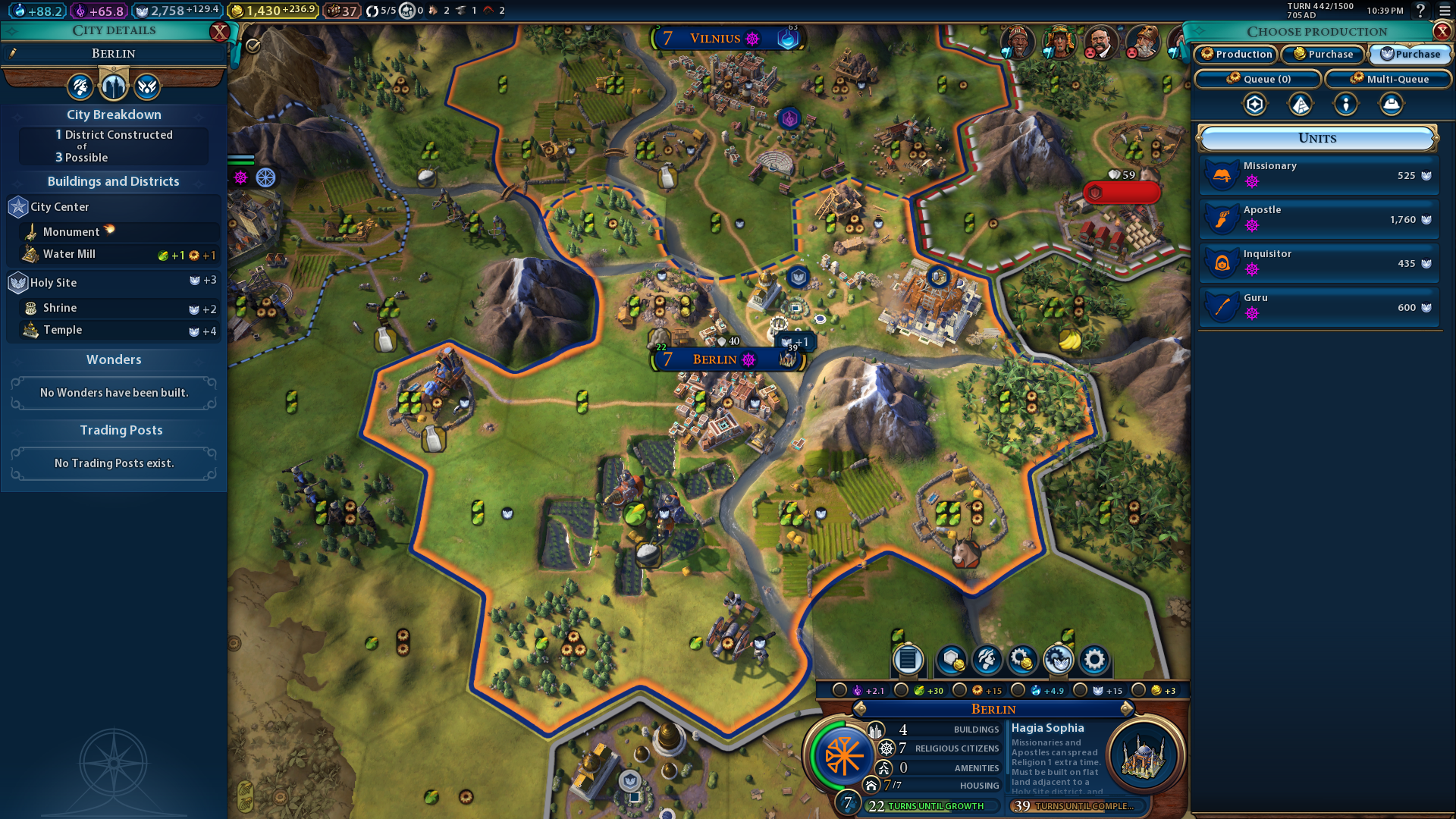 Nippur Has no districts, but should still be able to make land units... can't 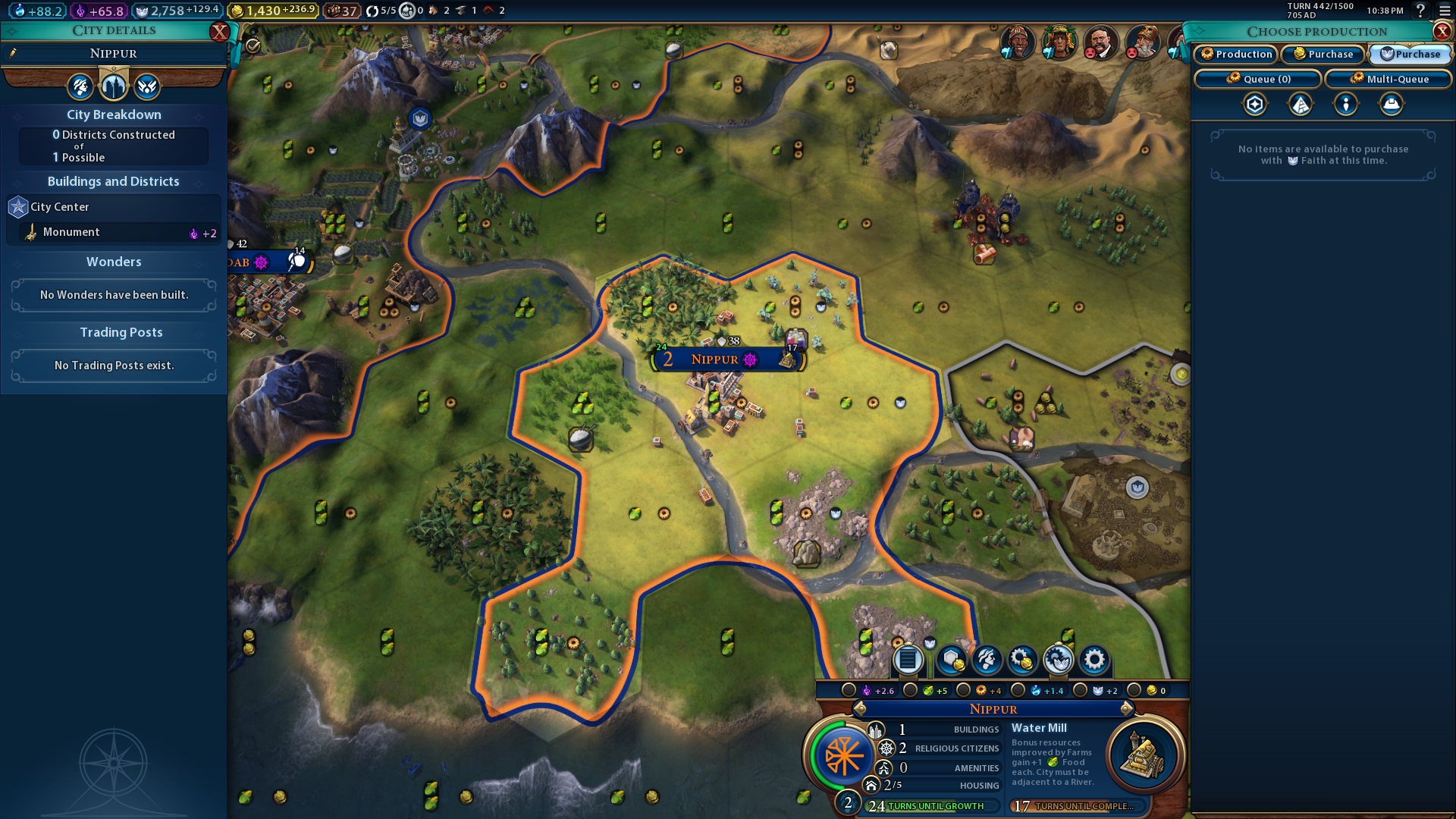 Ulm: No districts just like Nippur... yet can make military units. 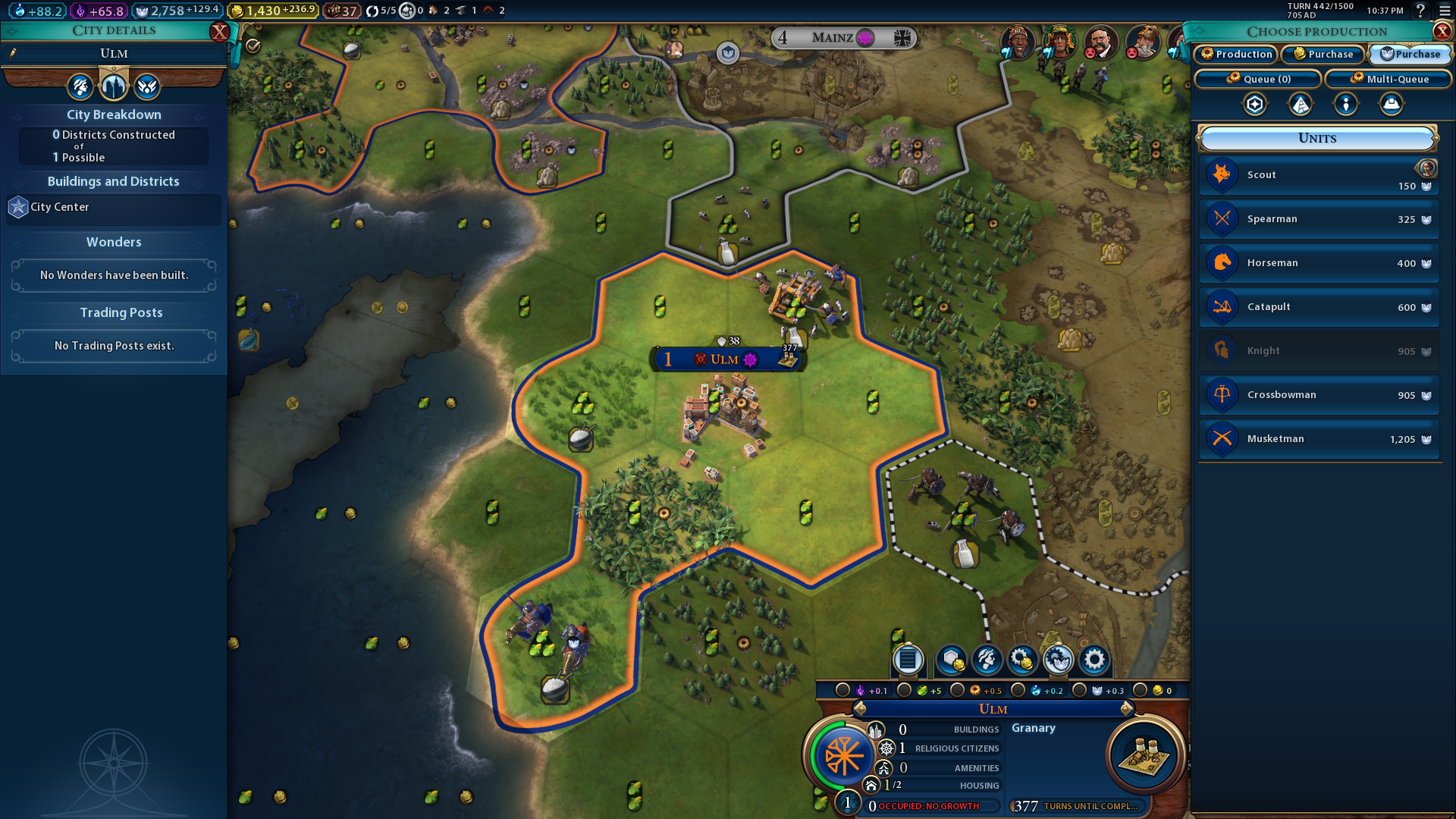 Adab: Has Campus, yet can't buy library with faith 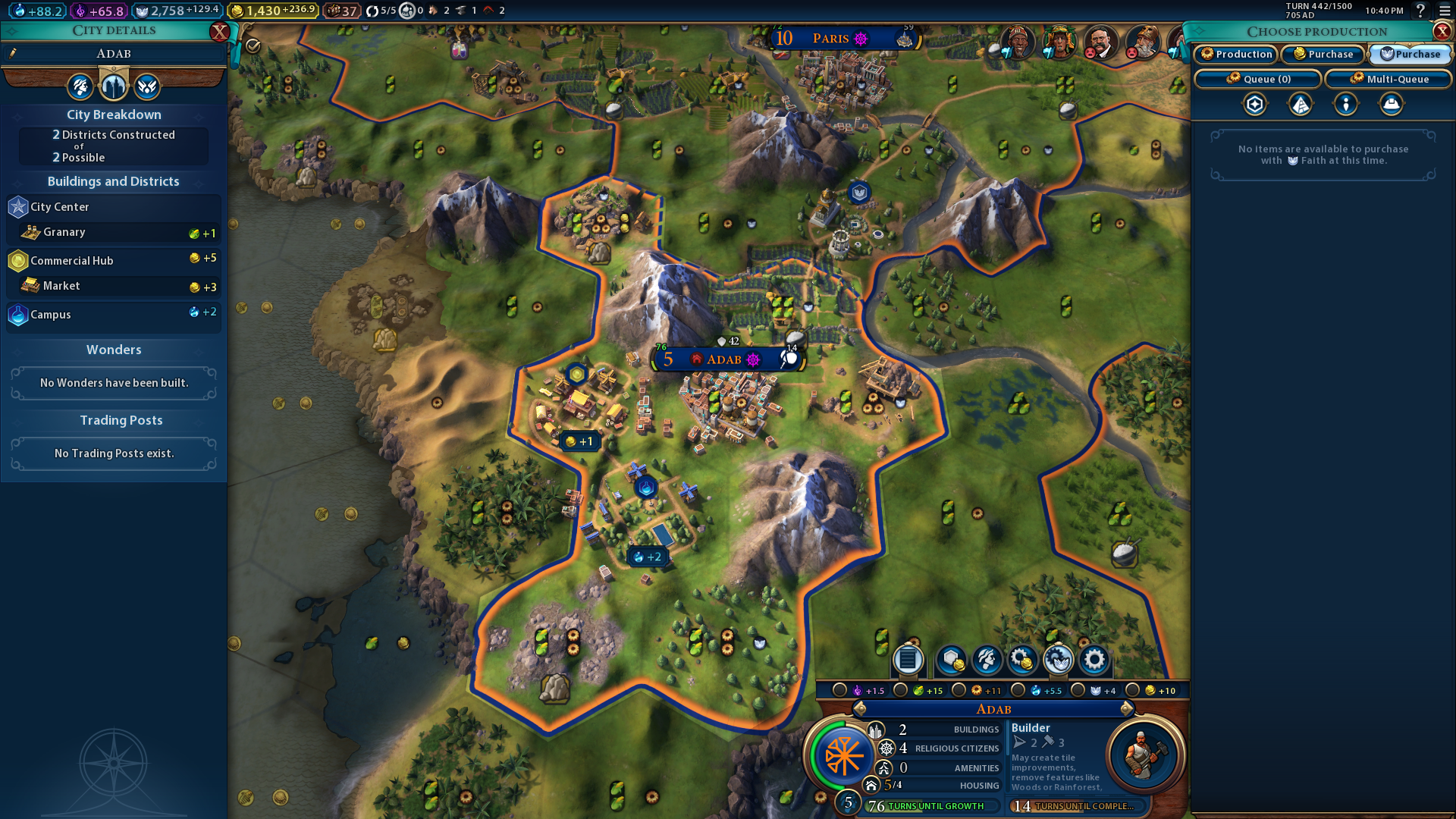 Adab can buy a library with gold though: 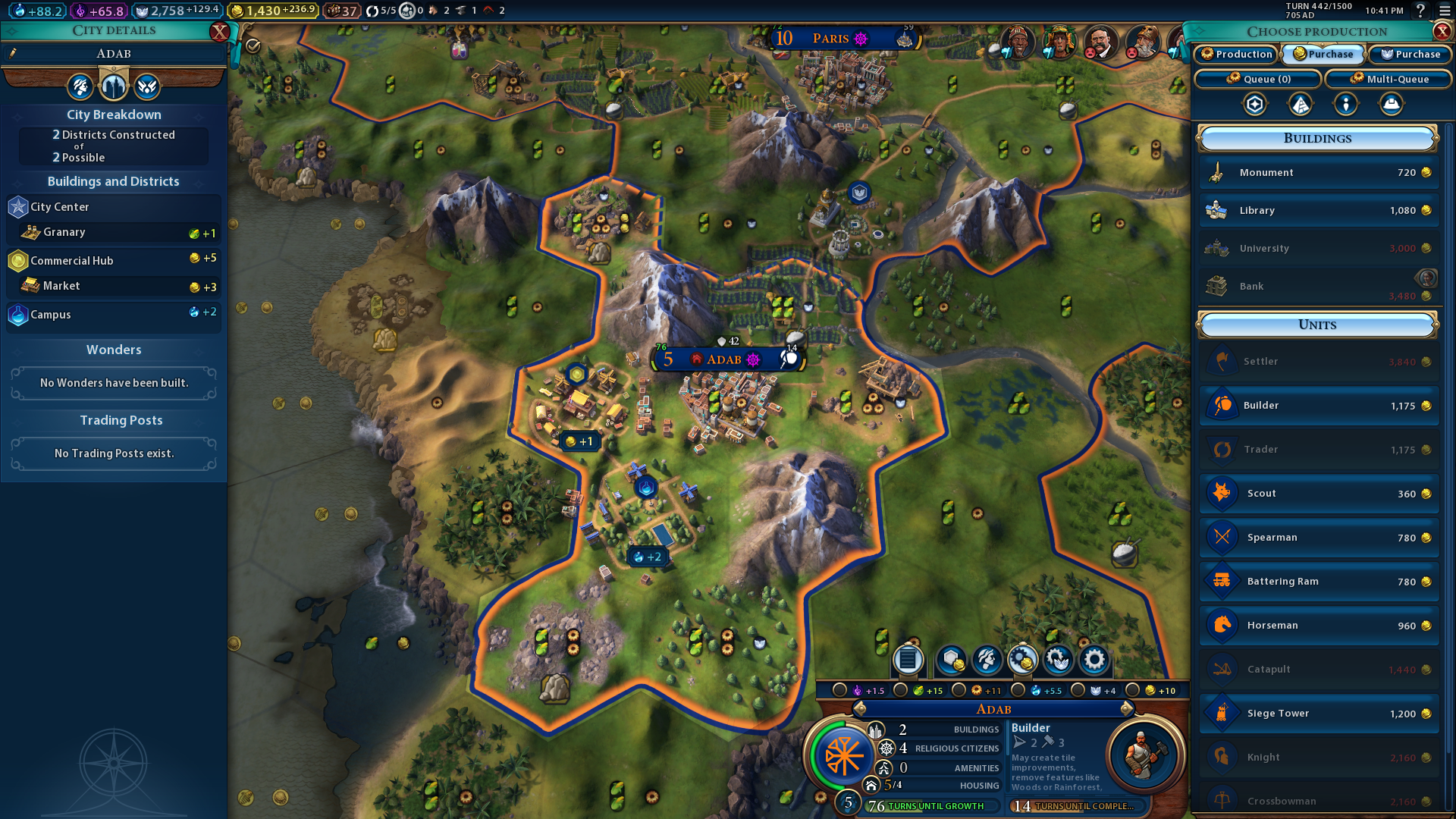 I finished my war with the Germans. The city being occupied does not matter, however the city being new-to-me does seem to. (Note, not new to the game, some of the now-working cities were settled way before this bug came up, but they were owned by a German deity computer player before the war.) Cities I settle going forward and cities I took over from the Germans all seem to work properly for being able to buy religious and military land units. (I haven't got any empty theater squares or campuses to test that part yet.)

Is there any way to reset all of my other cities? If this was a multi-player game I could try trading everything to another player and having them trade it all back... but this is a single-player game.

It was started on July 16th, 2020. I have no idea when the patch came out on the Epic Games Launcher.

Moginheden said:
It was started on July 16th, 2020. I have no idea when the patch came out on the Epic Games Launcher.
Click to expand...

That would be yes, as the update was on July 23 for PC. (Epic version would have been that date or after.)
Keeper of the Civilization VI Version History
You must log in or register to reply here.