I first noticed this when I realised in one game I was playing that Japan (who started the war) and The Maya had been at war for a good fifty turns or so and despite being direct neighbours whose territory was pushed up against one another, the war score was zero. When my scouts passed through I noticed that The Maya had an army, but it was just standing around or shuffling, and not in the direction of Japan's territory. So I ran some observer games (with no other mods) with domination as the only victory condition and in all of them the AI started wars normally, built up an army, and then in most cases refused to use it, and had it stand around their territory instead. Here's an example of the kind of thing I observed:

Spoiler Japan at war with France : 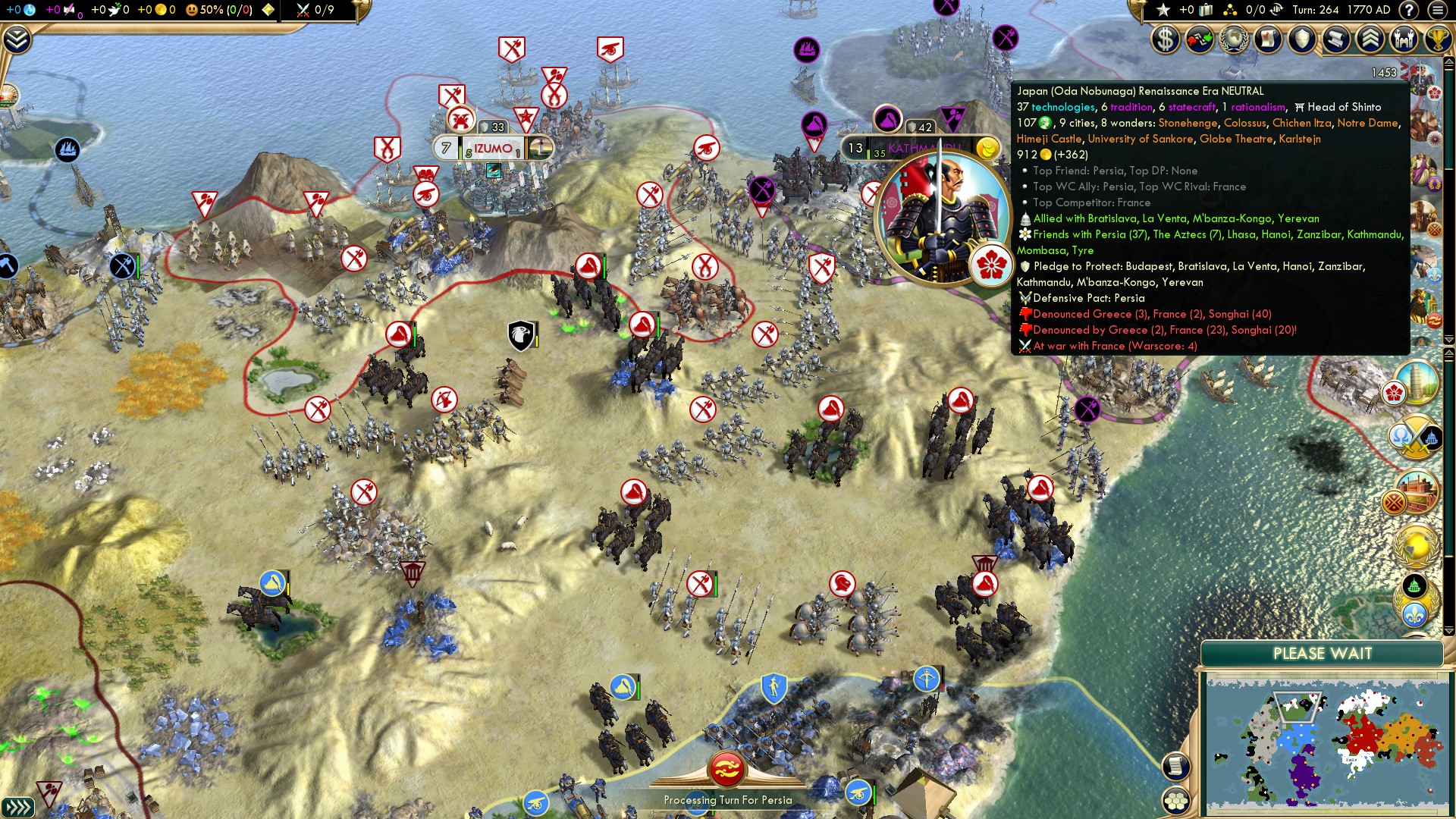 I wondered if anyone else had noticed the same thing and whether it was linked to the AI passivity I've seen mentioned in some threads.
N

nekokon said:
Ilteroi confirmed it's a bug that has been fixed (but not sure when it'll be released)
Click to expand...

Oh that's great news. Do you happen to know the most recent version where it wasn't an issue?
N

Sadly no, I also just came back from a long break from VP.
The threads for previous versions are still around so you can try them out (I would start from 2.5 then backward). Since ppl just report this in v2.6 likely it's new and 2.5 is unaffected.
S

nekokon said:
Sadly no, I also just came back from a long break from VP.
The threads for previous versions are still around so you can try them out (I would start from 2.5 then backward). Since ppl just report this in v2.6 likely it's new and 2.5 is unaffected.
Click to expand...

Thanks anyway. I tried 2.5 and the issue is still present. I think I'll just wait for the next version.
I

you can find a dirty build here: https://github.com/LoneGazebo/Community-Patch-DLL/issues/9199#issuecomment-1250820998
S

ilteroi said:
you can find a dirty build here: https://github.com/LoneGazebo/Community-Patch-DLL/issues/9199#issuecomment-1250820998
Click to expand...

Thank you! I tried running an observer game and there has been a big improvement, especially around and after the renaissance. But there are still cases of the AI shuffling their standing army with some border scuffles, with a stagnant war score. And the AI seems to make no attempt to attack over water.
You must log in or register to reply here.

Sep 18, 2022
SpecifiedUsername
S
C
Refinement of a Proposal: Diplomatic Penalties for player for gifting units to City states with the AI is at War with

R
Is stable multiplayer with 2 players in one team vs AI achievable?