Welcome to the 6otM139 After Actions Report thread. In this thread you can post the results of your game. Please state victory date and score (preferably in the post title), as recorded in the Hall of Fame, and the most important: your path to glory!

STOP - Please do not continue reading this thread until you have completed and submitted your game.

- What was your plan for achieving the VC? What are the major steps you planned to take? What events, if any, changed the plan in execution and to what new plan? Any interesting decision points?
- What were your initial 5-10 builds in the capital or other early cities?
- Early order for technology/civics? What did you prioritize for technology/civics?
- How did the leader bonus and civ unique ability impact your plan/play, if at all?
- How many cities did you settle and/or capture? Where did you settle your first few cities?
- What were key production/purchase focuses? Military units / Civilian units / Districts & city development / Wonders / Civ Unique Unit & Infrastructure? Most critical or interesting?
- Pantheon chosen and why? Religious beliefs chosen, and why?
- What governments did you select? What key policy cards did you use? Why?
- Which Governors were most important; when and why?
- Was diplomacy/trading useful? How? Relations with other civs?
- When did you have Dark/Golden ages?
- How did the game modes affect or impact your play?
- Any surprises/frustration/elations you ran into, how did you deal with it?
- Did you enjoy your game?

Please use spoiler tags for any surprise details you'd like kept hidden. Thanks. 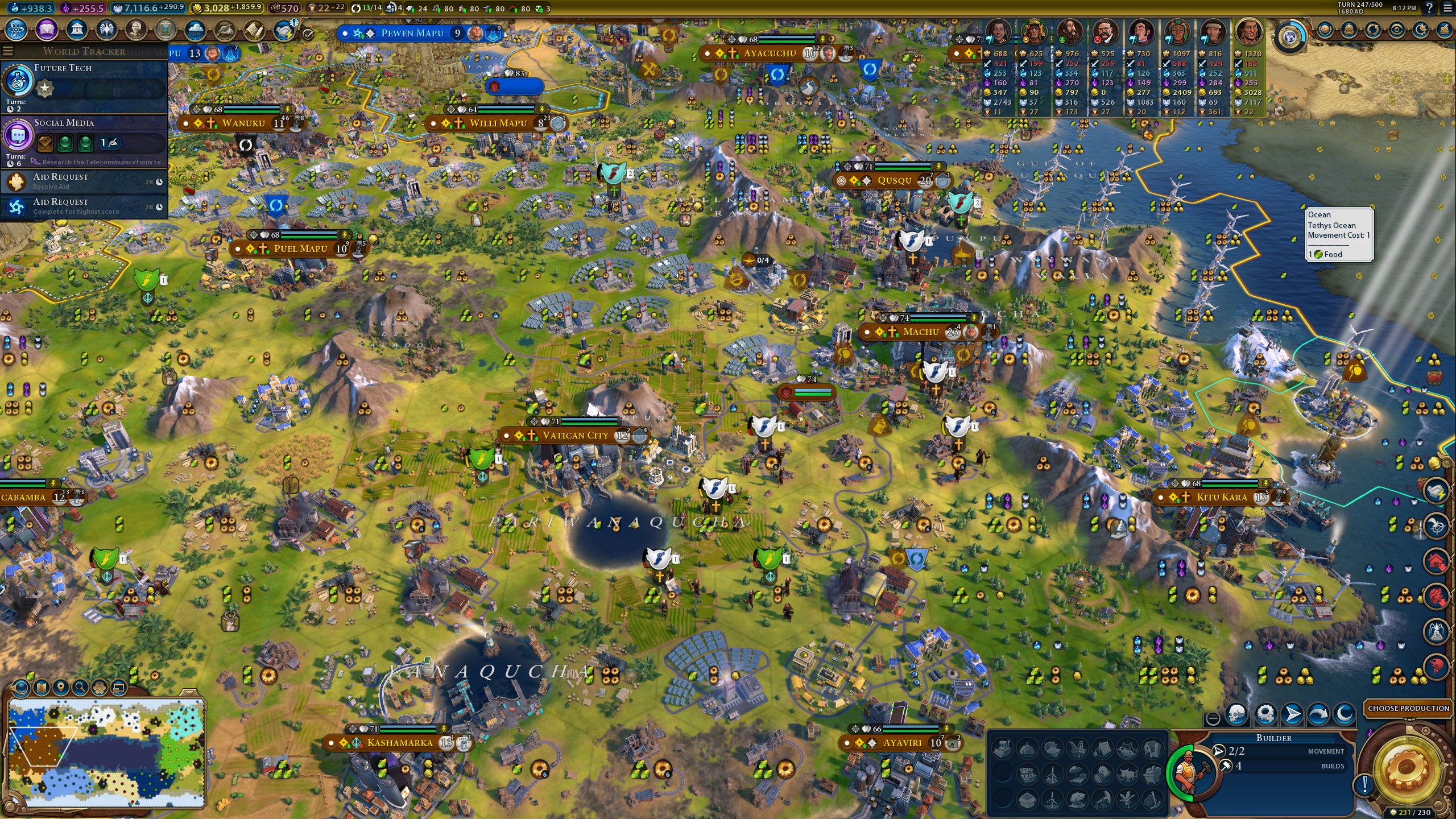 Abused the hell out of the breathtaking mountains. Severe lack of Scientific States, as well as very hot climate made it fairly slow, but overall I'm quite happy with my result.
No wars waged, no cities captured, managed to flip some of Mapuches though.

Quite regular game, got a bit over with preserves, had to build over all around with mines eventually in my Ruhr city (which, despite being built late, got hit by 5 or 6 catastrophies, last one destroying spaceport). Could've shaved couple of turns by buiilding 4th spaceport.
No wars (only got declared when allies got attacked), snatched almost dead Vatican from Maya, late in the game killed Valetta for monopoly.
Settled monopoly cities and aluminium city on the empty SW continent. Too bad this isn't a cultural victory game, didn't know their insane boost to tourism.

The commander must be like the eagle and see the whole, and yet still be like the hawk and see every detail. And if he acts like a common tit, he can hang upside down all day and eat fat bacon.
Terry Pratchett, Monstrous Regiment
L

Well, it's been a loooong time since i last played a 6otM or any Civ6 game so i was a bit worried i wouldn't be able to win a Deity game, but i still wanted to see what Incas could get out of mountain preserves. Finally managed to get my SV on turn 322, far from any of the top players but i'm still happy about it.

Wow, did not expect to sign in to report on my game and see a post from Lord Yanaek! But glad for the opportunity to say "Thank You!" for compiling the Master List; I've gone back to a bunch of those games now out of interest so your handiwork continues to be quite valuable and helpful!

Only my second game ever with Inca; abandoned the first one a while ago after about 50 turns. But I've been trying out Bull Moose lately so thought I was already attuned to Preserves, so was looking forward to this game. Science is always a bottleneck for me in SV, so I thought having 2 sources of science per city (Campus and Preserve c Sanctuary) would help. In the end it didn't seem to make that much of a difference for me somehow, and I had to pretty much pillage all of Gran Columbia and Aztec in order to help get over the science hurdle to Offworld Mission. Along the way ended up taking most of America's cities and also two from Gran Columbia. Probably should have kept warring and pillaged Maya and Brazil as well, but just got tired of moving units around.

Interestingly, given the food yields with Groves, ended up building almost no Terrace Farms. Also, didn't find the Waraq-ak (sp?) to be a very useful unit.

The Warak'aq can be super powerful, but require some planning ahead to get there. You need to build a bunch of scouts, ideally get one (maybe two if possible) ranks early, have gold to upgrade, then slot in the survey card and rank them up to ambush (best way might be to go to war with a city-state, wipe out the troops, then take turns firing at the walls). Once they're at ambush they are super-mobile and hit crazily hard twice a turn. Add in a knight or man-at-arms to take cities and you should be able to wipe out one or two nearby civs without much trouble.

First Deity win ever. Also a science victory, but I’m not sure i fit would count, because I took some enemy capitals.

I enjoyed the same, until I knew I would win and I had to take a lot of turns, and played with little joy.

I loved terrace farms. I was unfamiliair with Preserve. I didn’t use its powers, but I will do in the future.

I learned from your posts for this game. I enjoyed corporations. A bit silly that you have to use great merchants in the process. Could have been better developed.

My major plan was to survive and to last as long as I could. During the game it changed to get siege weapons with enough range. After that it became very easy. I had to conquer the Mayan, since they were very advanced and would have won the game (diplomatic or science).

I used the leader bonus and civ unique ability as anyone else. It is nice to make a city become 46+ pop.