Welcome to the 6otM 32 Opening Actions thread.
STOP - Please do not continue reading this thread until you have completed at least 80 to 100 turns in your game.
This thread is used to discuss the game once you've started playing through your first 100 turns. Apart from normal decency, the only posting restrictions are to please not post videos until the deadline is finished and to use the spoiler tags for screenshots. Here you can post questions related to the game and share your achievements/anger/frustration/victories while you play. Please remember that we are running a family friendly site, so express anger or frustration with this in mind.

Please use this thread to discuss your goals for the game and your opening moves through the first 100 turns. Anything after that should be posted in the After Actions thread once you have completed your game.
- Where did you settle your city?
- What did you research and which policies did you choose and why?
- What was your build order?
- How soon did you build a District? Which ones did you prioritize?
- How did you place your districts?
- Did you emphasize expansion? How many cities have you built/captured in the first 100 turns?
- How did you play your governance cards, priorities?
- What City-States did you meet and which ones did you cultivate to your side?
- Were your neighbors peaceful?
- How were the Barbarians?
- Any surprises?
Please use spoiler tags for any surprise details you'd like kept hidden. Thanks.
Civ V Game of the Month Forum

I settled one hex to the southwest, just east of the cattle hex. Going straight for Pottery and Writing was a no-brainer, because I'd already met Montezuma (and ganked his settler!). I built the Campus as soon as I was able, two hexes north of Uruk, and then the Library. I didn't emphasize expansion per se, but it happened pretty naturally, especially after Trajan started messing with me (twice!). As for City-States, it took me ages to even meet any except Nan Madol. The barbies were no hassle at all -- especially not once I had a couple of war carts.
C

- Where did you settle your city?
After taking Aztec Settler, settled in place... built 2nd city 3 tiles east of cap.

- What did you research and which policies did you choose and why?
Early on went for Mining and Animal Husbandry for +prod, then went for Writing/Irrigation (Campi/Plantations)...afterwards heading for Currency/Apprenticeship for the Districts. For policies I early took the colonization, but did not make use of it.... Manoeuvre was way more useful...

- How soon did you build a District? Which ones did you prioritize?
Definetly prioritized Campi, but mostly placed them in first hand... after that commercial zones.

- How did you place your districts?
Near to city with minor adjacencies.

- Did you emphasize expansion? How many cities have you built/captured in the first 100 turns?
As always by sword. 6 on the whole, Capital + Eridu (Aztec settler) + Rome + Sparta + Athens + St. Petersburg (no city razed). No settlers built so far.

- How did you play your governance cards, priorities?
Main thing here was Maneouvre.

- What City-States did you meet and which ones did you cultivate to your side?
Met them really late. ;-( But "focussed" on Brussels and Geneva somehow.... (the "send trade route whilst 999+ tiles away stuff)---

- Were your neighbors peaceful?
Definetly NO. After I declared on Rome, Greece and Russia joined in as well - which led to their extinction approx. turn 50.

- How were the Barbarians?
At first kinda calm. Early camp raid offered almost free manoeuvre, but mid game they plundered some tiles next to my cities, because I was not bothering building any military anymore...

- Any surprises?
My scouts heard rumours about sth called "city states"...but really, what kind of governance should that be?
Last edited: Feb 6, 2018

It’s about T115, been pretty lazy with everything but it’s so easy with the early tanks. Just thought I’d get in a last GOTM before the patch. Spaceport done and I have about 15 trees in my spaceport city with GReat Zim.
Nowhere near organised enough with my builders but hey ho.

Settled north west 1 tile to get 2 tile from mountains, built builder and monuments then into chariots and just walked through the civs as one would expect. Main issue has been barbs everywhere, damn things looting my squares. I think AI ended up building about 10;archers to deal with them. Lost a few and a chariot but it spiced things up. Germany only had 1 city when I took them out at about T80, poor souls we’re struggling with barbs everywhere.

CS were rare then plentiful, odd game. Will finish and post after a cooking course with my daughter. 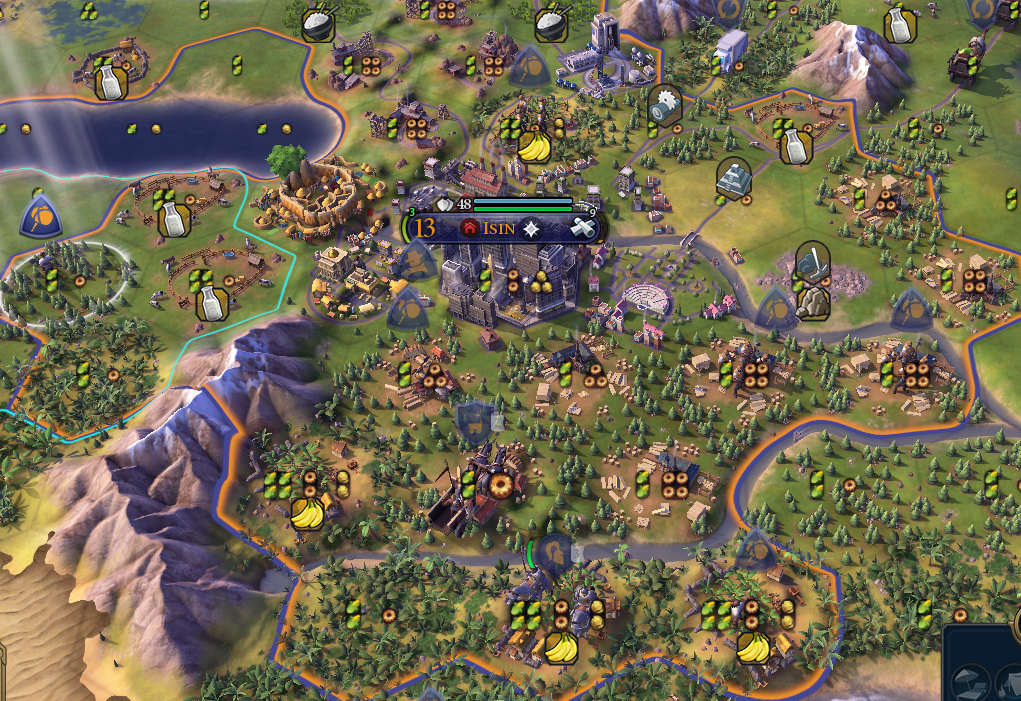 Gilgamesh is my goto civ, so I can really compare this game to the many games I played with Sumeria.
My main strategy for this game (even more than ever) was early conquests, driven by the starting situation of the Aztecs directly on the borders...
Deciding on that, I found myself producing almost only war-carts for 50 turns... (maybe 2 builders thrown in).

turn 0 - moved the warrior first, saw we have a sea. Settled one hex down left, so the capital has access to the sea on the left.
Found the village down left, and luckily got a builder! This allowed...
Turn 6 - Ziggurat - gave me a whooping 6 science on turn 10!
Turn 9 - chose God King for early faith (got an early pantheon on turn 26 - God of the open sky)
Turn 21 - Started a waaay-to-long war with the Aztecs. Destroy their army first, then continue to capture the cities.
Turn 50 - Defeated the Aztecs. 3 cities (two of them conquered), 9 war carts, 10 sci, only 8 culture

From there started stabilizing the cities - production, food and culture, and expanding the army: Warcarts upgrade directly to knights, which is amazing. Around turn 80 started upgrading the army of 20 war-carts (zero cost, completely broken) to knights (very expensive).
Followed to...
Turn 101 - conquer the Romans
Turn 111 - conquer the Spartans

Around turn 100 get Cartography, built a quick harbor and immediately send 4 knights and a captured settler overseas for exploration and setting an invasion base...

I plan on conquering the rest of the starting continent (Russia is a meaty target!) and racing for the science victory from there.

- Where did you settle your city?
As Brazil, I settle in the jungle with bananas and diamond.

- What did you research and which policies did you choose and why?
Gone early Holy site and then gone pantheon to achieve a very high faith output to purchase Great Persons. Then focus on culture with a minor science to achieve Nationalism fast as possible to unlock Minas Geraes and win a Domination victory.

- How soon did you build a District? Which ones did you prioritize?
Holy site with +12 faith per turn very soon, then Campus, Theatre square, Harbor and Carnival Streets.

- How did you place your districts?
In the middle of the jungle with some Mountains.

- How did you play your governance cards, priorities?
Always tried to be maximally effective with production discounts, like not build troops until have discount cards for it. The prioritie was to get Press Gangs for Minas Geraes.

- What City-States did you meet and which ones did you cultivate to your side?
Kabul and Lisbon, not great, but useful later on.

- Were your neighbors peaceful?
Yes and No, I could maintain one friendship with Indonesia the whole game until the end, the rest was very hostile (Sumeria, Norway, China and Persia)

- How were the Barbarians?
Not doing much.

- Any surprises?
Somehow Sumeria could achieve a high Science output with just 3 cities (Emperor difficult), Indonesia faith was 830 faith per turn, thank god she invested all in missionaries and not Great Persons. Minas Geraes was very effective at all eras, even in the Information Era with 97 ranged strength.
D

I started playing Civ 6 after the expansion so I am going backwards with this one, but like the challenge of space victory. In later games I have relied on govt plaza to build the 3rd level building that allows builders to affect districts. I don't seem to have been given the option to build a government plaza as Sumeria. was it intoruduced later, not available in this civ or did I make a wrong choice somewhere. Any help it someone is still looking at this thread.
You must log in or register to reply here.