This thread is motivated by the discussion here (https://forums.civfanatics.com/threads/egypt-babylonia-space-victory-suggestions？.676845/). After several attempts I think I've found a locally optimal solution. It may seem gamey at times but, if carefully executed, can allow reaching the Global Age in the 1400s. I have not finished the game yet, but in any case it should guarantee a space victory well ahead of the deadline. Any suggestion is welcome!

My central focus in playing this game is to maximize science by all means necessary while undertake expansion as early as possible. This also entails chasing as many religions as feasible for the nice synergies between wonders of difference religions. The rough themes of each era are

You can fit three cities in Babylonian's core which will have more than 2x Babylon's population, but the increase in core population is probably marginal. Founding Babilu on spot will allow it to monopolize on 3/4 shrines (Orthodoxy, Islam, Protestantism, Judaism is optional) and all the amazing flood plains, which synergizes nicely with Regulated Trade, Centralism, and wonders like National College, National Bank, Menlo Park, etc. With two or three cities your shrine gold and beakers will likely be scattered around, diminishing their maximum potential. Founding Babilu on spot will also give you a golden age once you clear the population & culture goals, which is not a game changer but not nothing either. (By beelining Writing and Philosophy you will all but certainly lose the first UHV.)

I, for one, was amazed by how many religions Babylonian can found. The wonders they unlock can help you economy snowball much, much faster. At the same time, it also requires a disciplined schedule of building and switching so you don't get bogged down building fluff wonders, as well as prior planning so you will have the slot/culture to build them when they become available, especially those you will build in Babilu. A good rule of thumb is to build all wonders with global effects (Mount Athos, Sankore, etc.) outside Babilu Also note missionaries of your state religion are guaranteed to succeed. 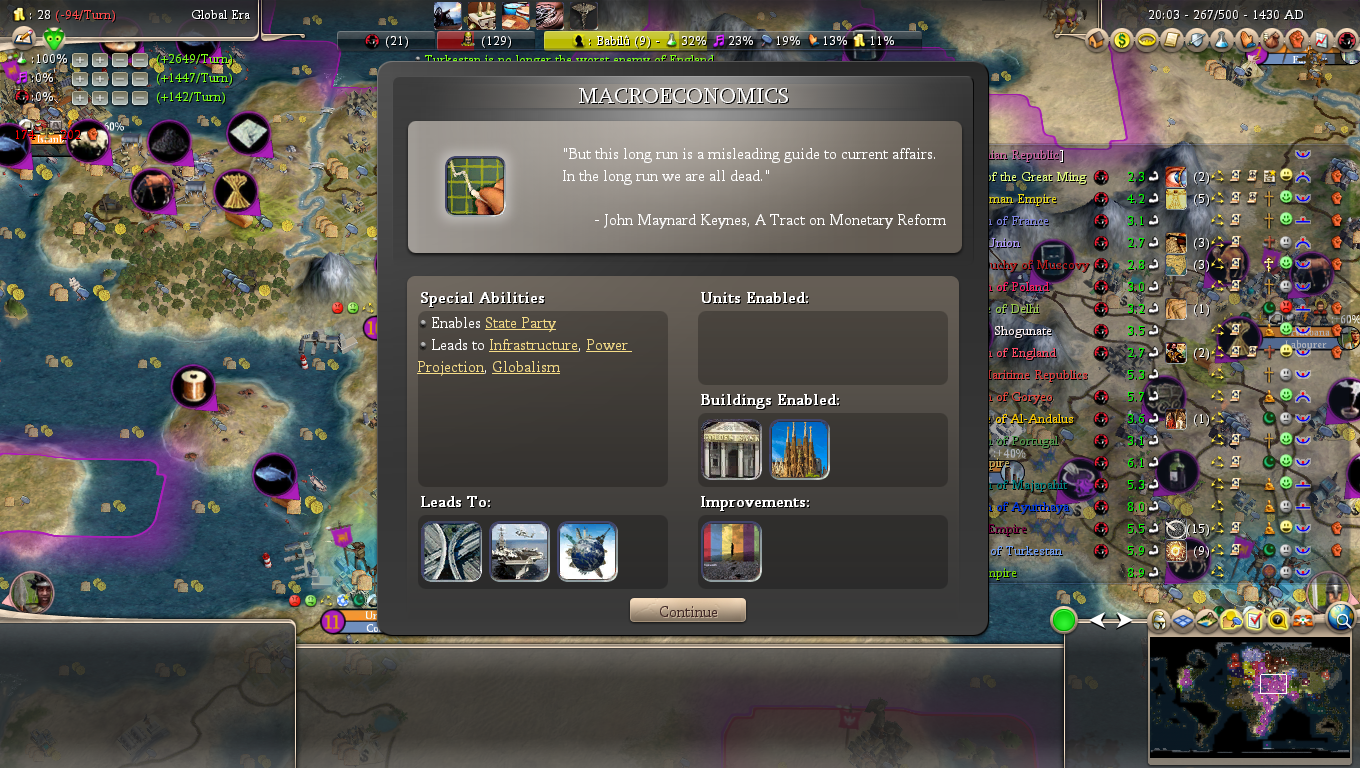 Okay...wow. How are you getting such fast research? This seems insane.
M

You seems to go to space before anyone starts Industrial Revolution.
You must log in or register to reply here.