Phoenicia is a relatively fast and simple civilization to play through. I have seen some other threads about how others play Phoenicia, and I thought my own take was unique enough to warrant its own thread. Disclaimer: This strategy is very doable on Marathon, but I have not tried it on Normal speed! If you try it out on a different speed, let me know how it plays out for you!

So when we first spawn in, we have a little navy, a small land force, and a couple of settlers. We also have precious little time! In this version of the mod, the Great Cothon is hotly contested, and we have to get started on its production ASAP. I settle Sur on spot, adopt Deification (Increased wonder production), begin building a library, start chopping the forest on the wheat, set my research slider to 0% (Yes, zero) and, because Greece sure likes to build my wonder, I invade Greece with my starting navy/army. My usual order of business is to pillage their workboats, destroy their production improvements, and enslave a worker or two (preferably two). Make sure your entire ground force is on the ground at the same time around Athens, otherwise their Hoplite will feel no need to stay hiding in the city, and come and kill any loner units! Your War Galley should soundly defeat their galley, especially if you are on the islands for increased defense. 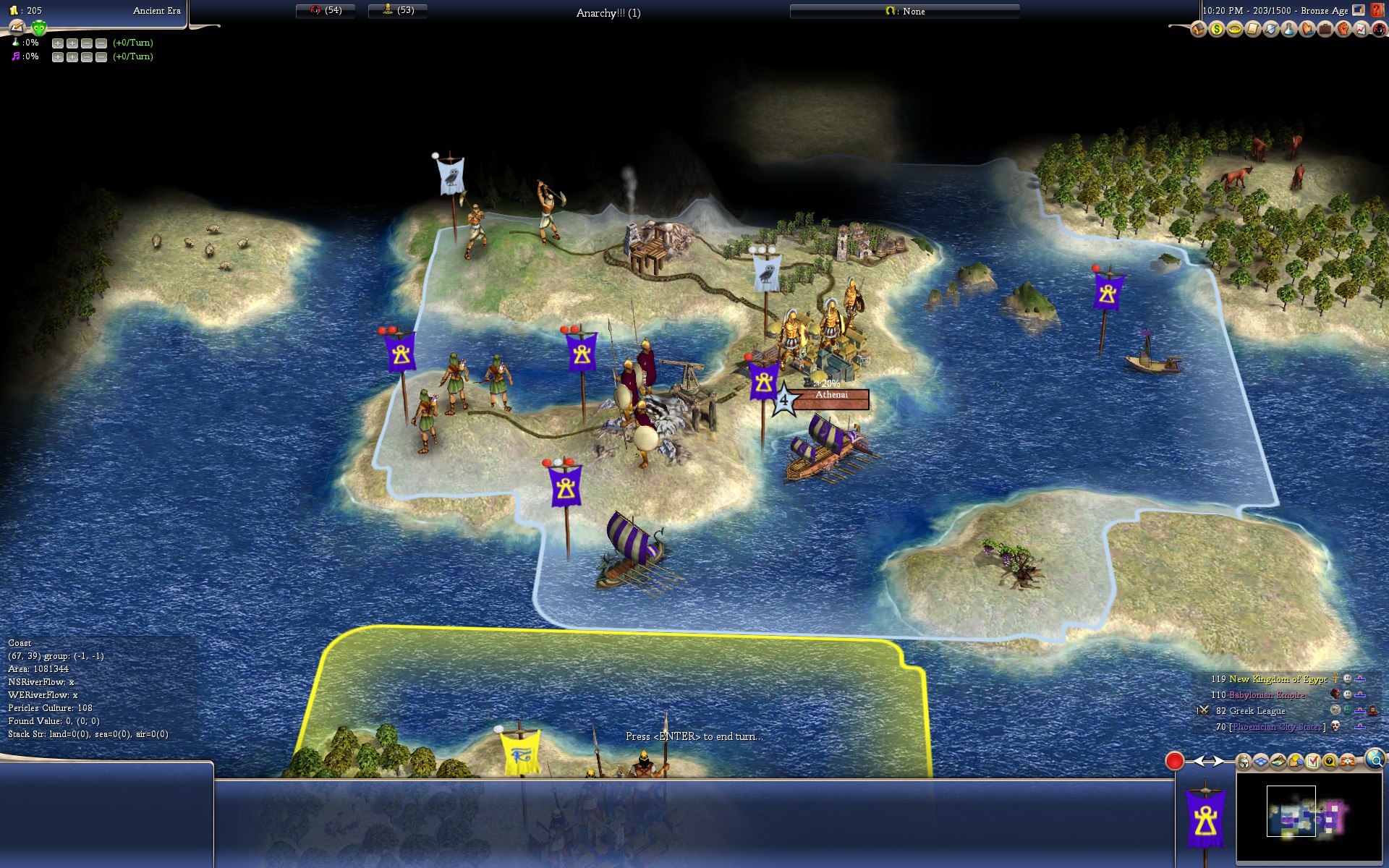 As I am causing mayhem with the Greeks, my galley with the settler is heading over to settle Carthage, and, hopefully, a second galley is close behind loaded up with two recently acquired workers. My war doesn't last more than a few turns: If Athens is surrounded with military units, Pericles will accept peace readily. If he is not threatened, he will not accept peace. Usually, the turn after peace breaks out, he is fine with open borders, which I accept.

At Cathage, I settle my workboat on the fish, begin building a quarry on the stone, and set my culture slider so that my culture here will pop on the same turn that it grows to size two. Once size two, I work the fish and the quarry, and begin building my Great Cothon. I chop the forest on the hill, and plant a mine. Hopefully, this will allow you to beat out the others to your wonder! However, I have played a couple of games where Greece still managed to build the Great Cothon in their second city in Anatolia (which I forgot to plunder), and I even had one game where Egypt beat me out to the Great Cothon! Grr!

Spoiler 80% of the time, this strategy works everytime. : 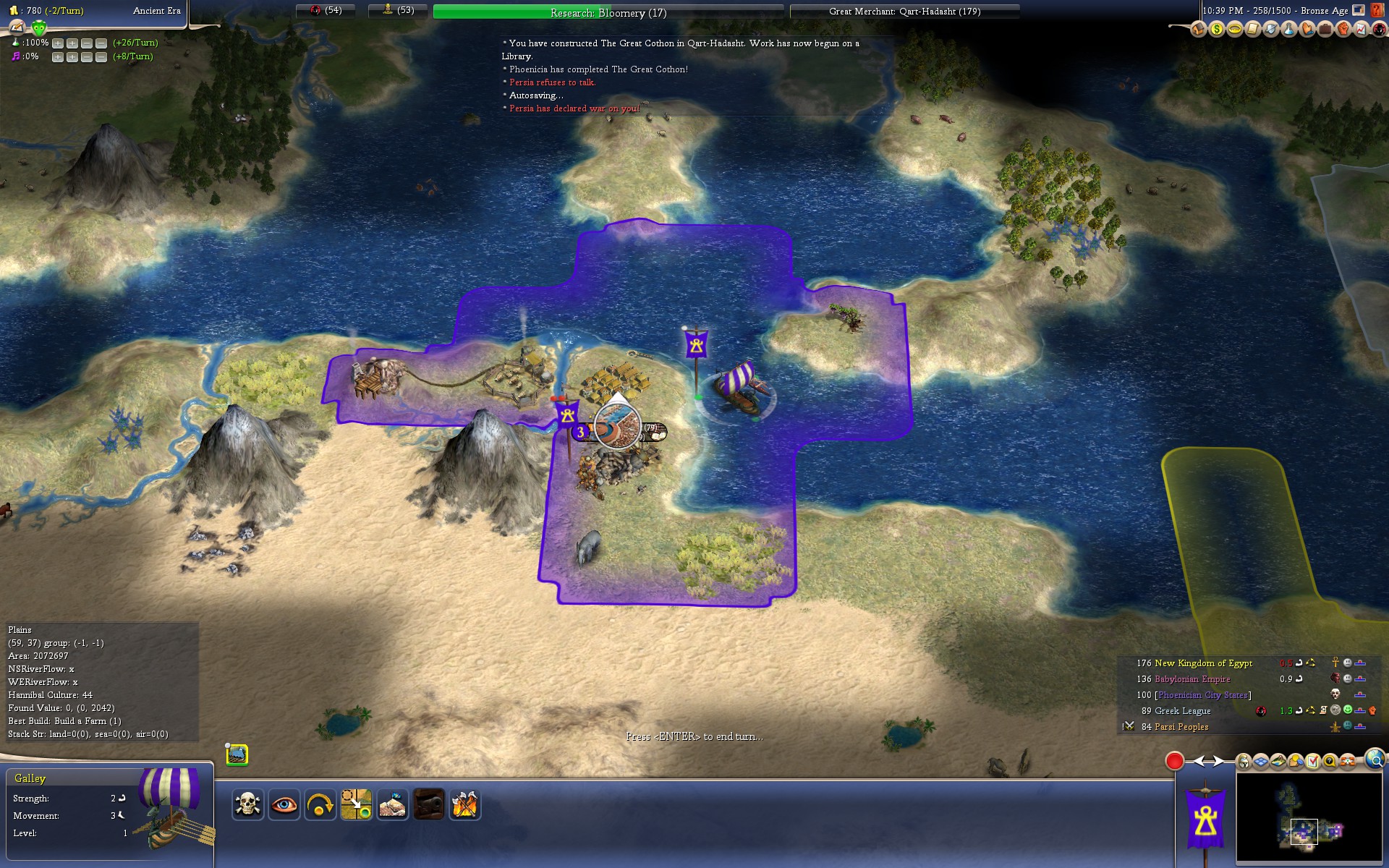 About the time the Great Cothon is (hopefully) built, Persia spawns in, and they tend to declare war. This is all fine and well, but they also tend to march an army right up to Sur. I have left my entire military back in Sur, but depending on how big an army they bring, I will have to rush out another Sacred Band or two. They'll try and take Sur, but Cyrus is no Alexander!
Spoiler Ouch! : 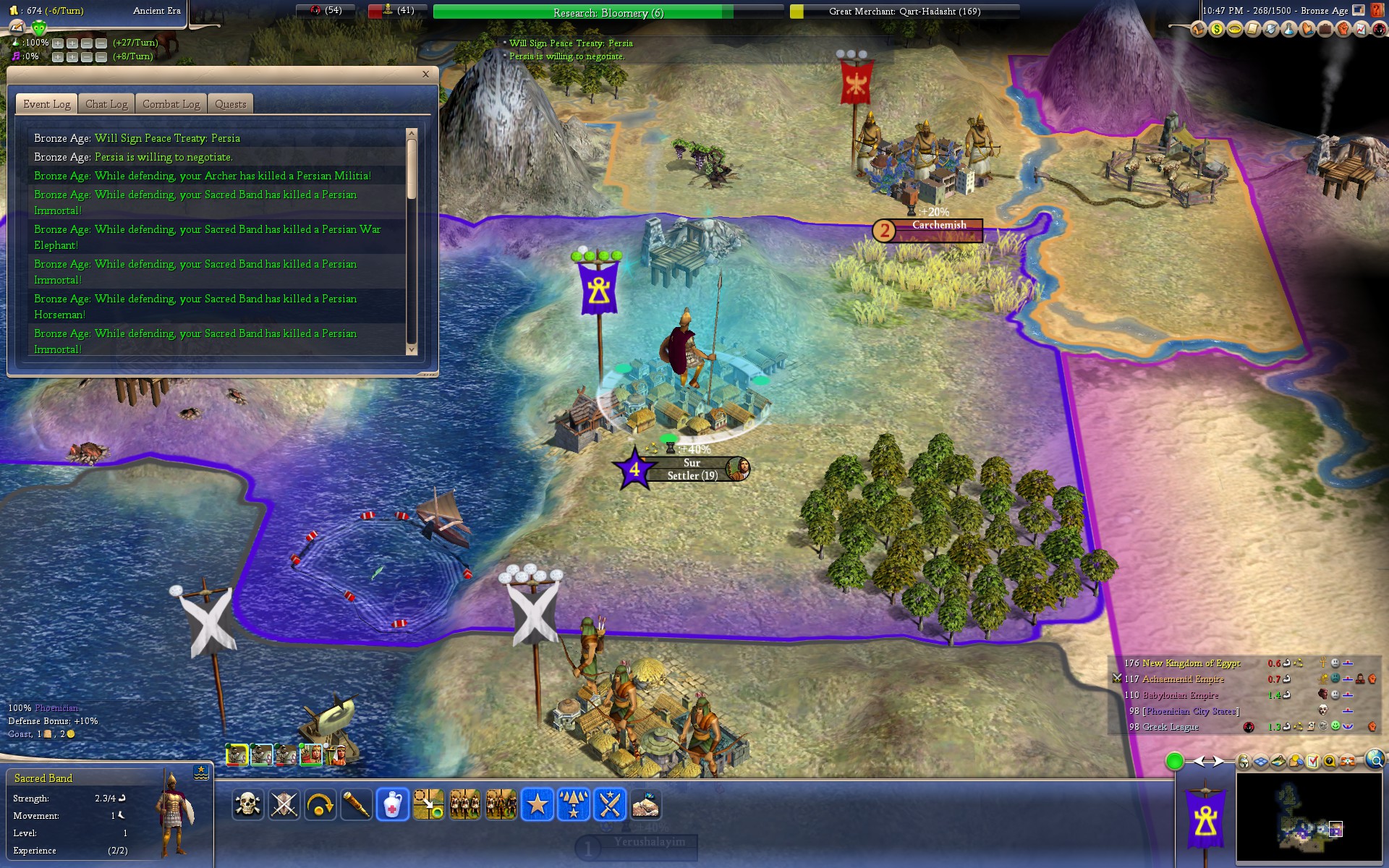 He still won't accept peace, but this is no big deal. Later on, when he has literature or I have contract, I will ask for peace, trading him a bit of gold or a tech.

In Carthage, after the Great Cothon is built, I begin building a library. In Sur, once I finish my library, only then will I crank up the research to 100% and begin producing three settlers. (You only need two, but I like three). The treasury will be nice and full, and I beeline "Generalship", starting with "Bloomery". I wait until Bloomery is researched to settle my Settler, as this will advance me to the "Classical" era, and allow me to start my new cities with a population of two! First colony location: Iberia, just south of the silver. One population will work the mine, and one will be a scientist. Second colony location: Four tiles to the west of Carthage. One population will alternate between the wheat and a mine on the dye (To make sure I don't starve), and another will be a scientist. My last colony will settle to the west of the wine, south of the Camel. One population will work the winery, and one will be a scientist. Sur, once it finishes my last settler, will run two scientists and begin constructing a barracks. As soon as I have three cities, Carthage will begin constructing a Palace. I finish well before the deadline, for the first completed goal! 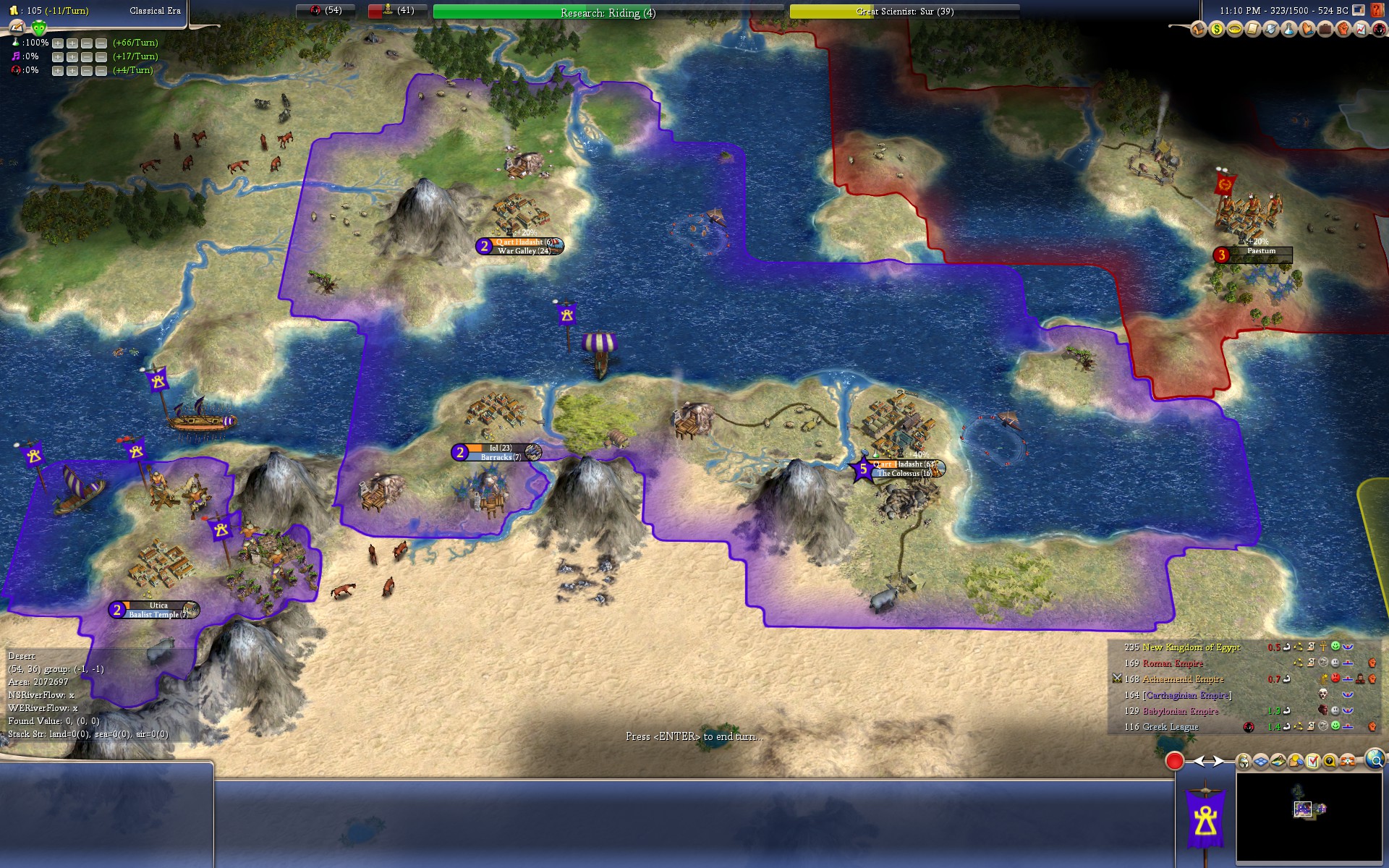 In my first Phoenician victory, I was lucky enough that several of the AI had literature, and I was able to trade away my technologies for several of the following: Riding, Calendar, Mathematics. In my second game, I wasn't as lucky, and only managed to trade for one of them, but it is no worries. Riding and Currency are the two technologies that I need to research now. Once all my technologies are researched, I adopt Merchant Trade and Conquest, and set my research slider back down to 0%. Also, after having lost several games to Greece building my Great Cothon wonder, I manage to stick it to the man, and build his wonder! 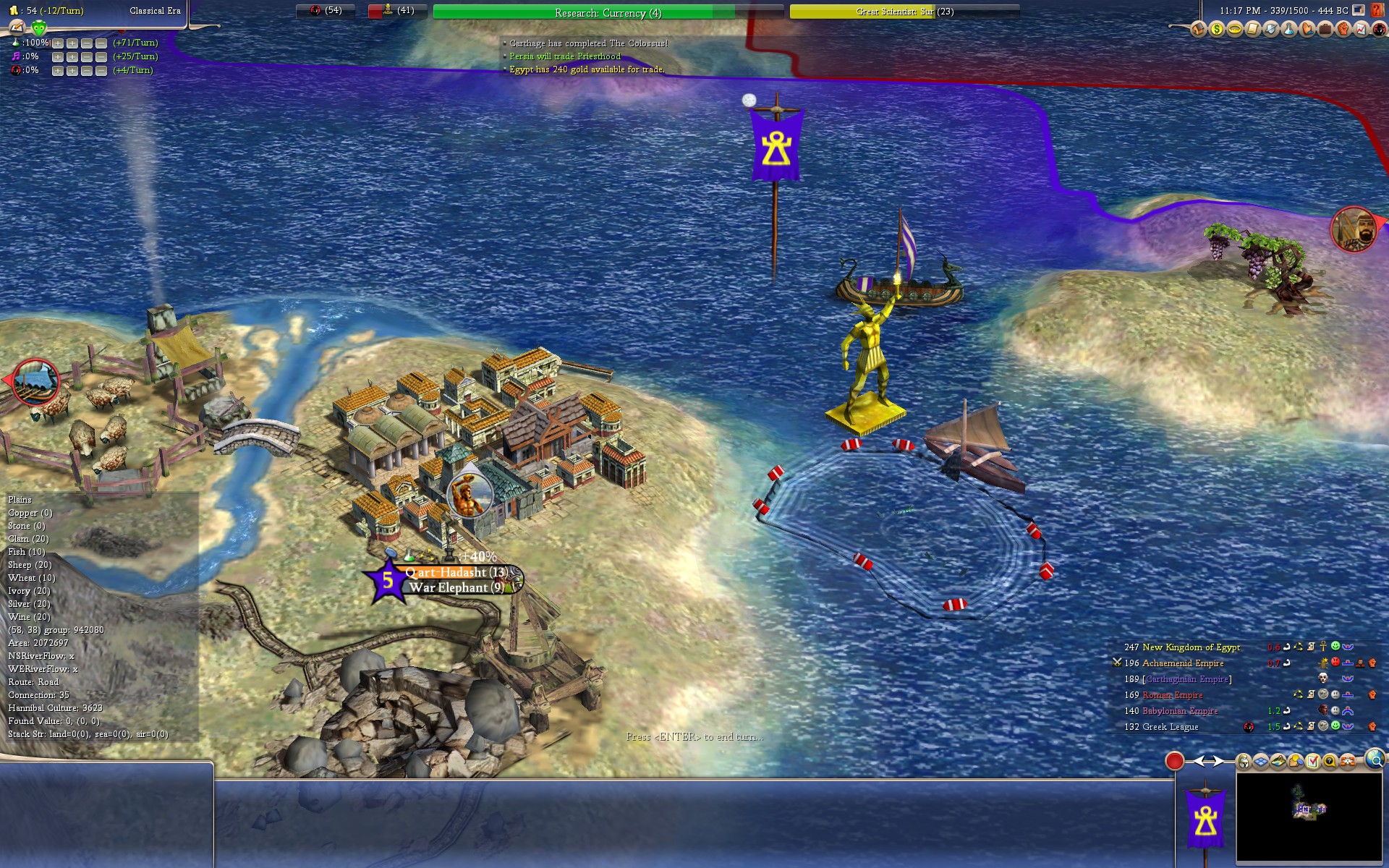 With all of that out of the way, my goal becomes more...Martial.

It is time for the Punic Wars

I held off on training as many military units as I could until now, because every unit costs maintenance, and gold is a valuable commodity when researching at 100%. Now, however, we must build our army as quickly as possible, in order to conquer Rome. A couple of catapults, a bigger navy, a few Sacred Bands, and several War Elephants! I do not hesitate to rush a few of these units, I will have plenty of time to get my gold goal met. Rome, if still alive, will spawn in several stacks of units back near Carthage and Iol around turn 385-387. Therefore, I must give myself enough time to collapse Rome before that time. Instead of invading in from the Alps as history told us, I begin in Sicily, and work my way north. My reasoning is that if I conquer the core of Rome, they will collpase, and if they have a city in Iberia, I won't even have to deal with it. 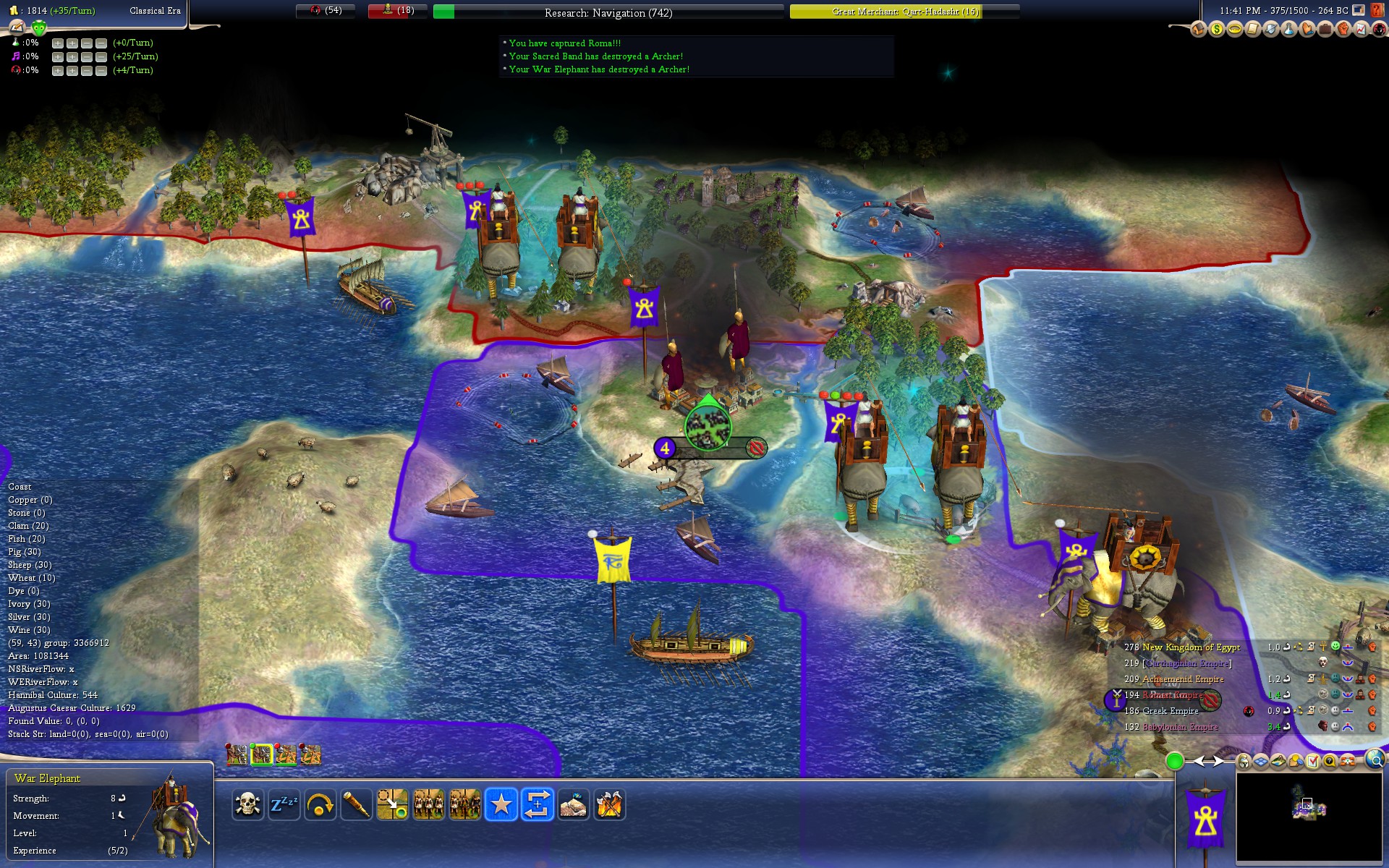 After sacking Rome, I march north and conquer the two cities Rome has here. The Roman AI is kinda funky, in that I do not think they realize their Praetorian's are actually combat units. I do not ever fight any of them, and everytime I see one he is building a road somewhere. Easier for me! I only have to deal with archers, and the occasional spearman or skirmisher. I was a bit sloppier andslower in my second game, but I still managed to collapse Rome in turn 386, somehow avoiding their counterattack! 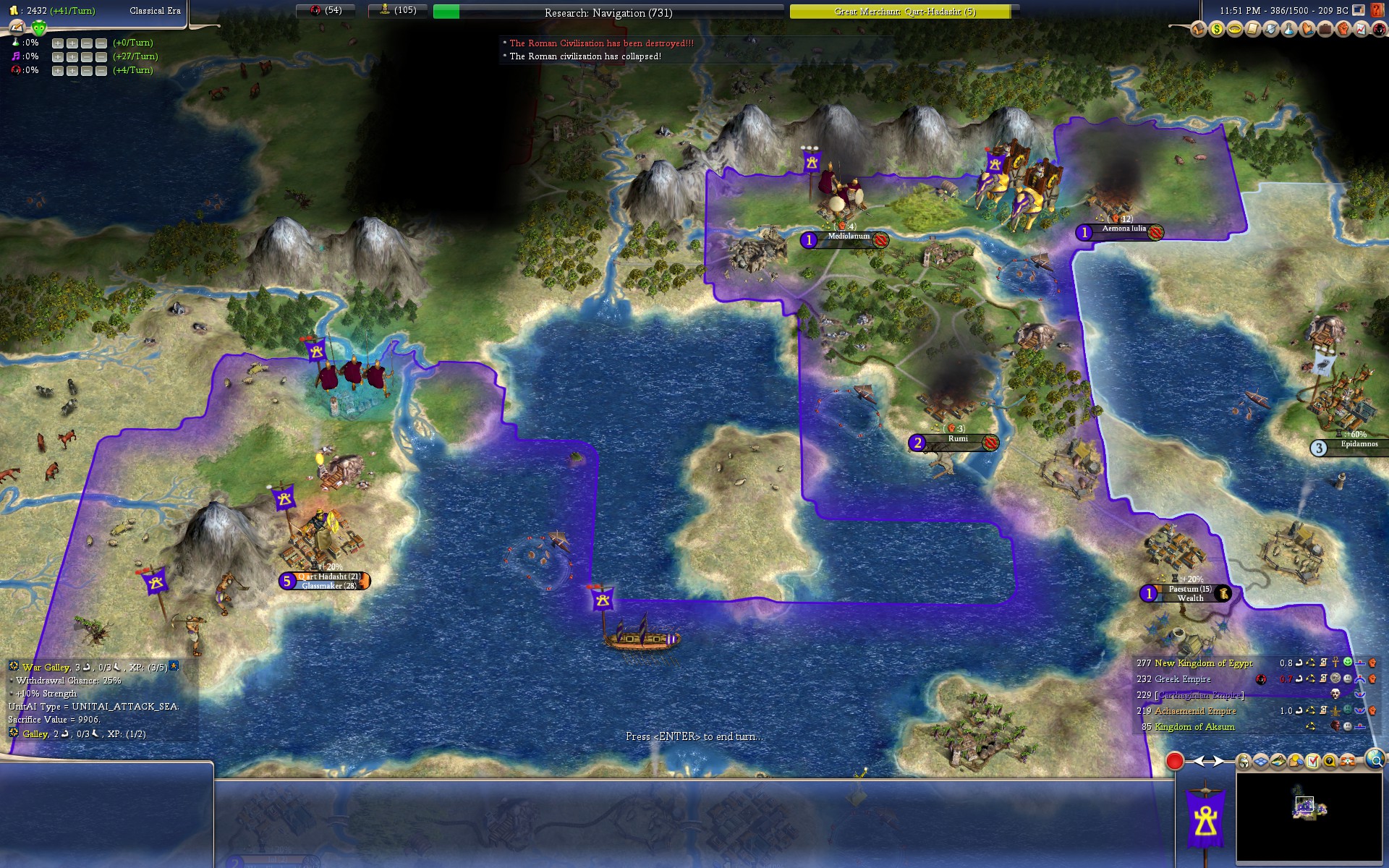 From here on out, it is relatively straightforward. Building Glassmakers and wealth in all of my cities, while running dual merchants in Carthage and sending my Great Merchants out to India or Persia, will shoot my treasury total well past the goal. However, I should not grow complacent! Although most of the heavy work is done, I must keep an eye on three areas of enemy activity: the Saharan desert, for barbarian Camel Riders, France, for Germanic Axemen, and Alexander the Great. Keep enough forces on guard in northern Italy/Iberia and North Africa to deal with the barbarians as they present themselves. The main threat is Alexander, who, after winning his wars against the Persians and Egyptians, will grow antsy and probably declare war. By my second game, I probably could've anticipated this and launched a pre-emptive invasion, but I neglected to do this. Regardless, I hold off his invasion of Italy until I meet my final deadline, with plenty of extra gold in the treasury.
Spoiler In my first game, I actually managed to collapse the Greeks. : 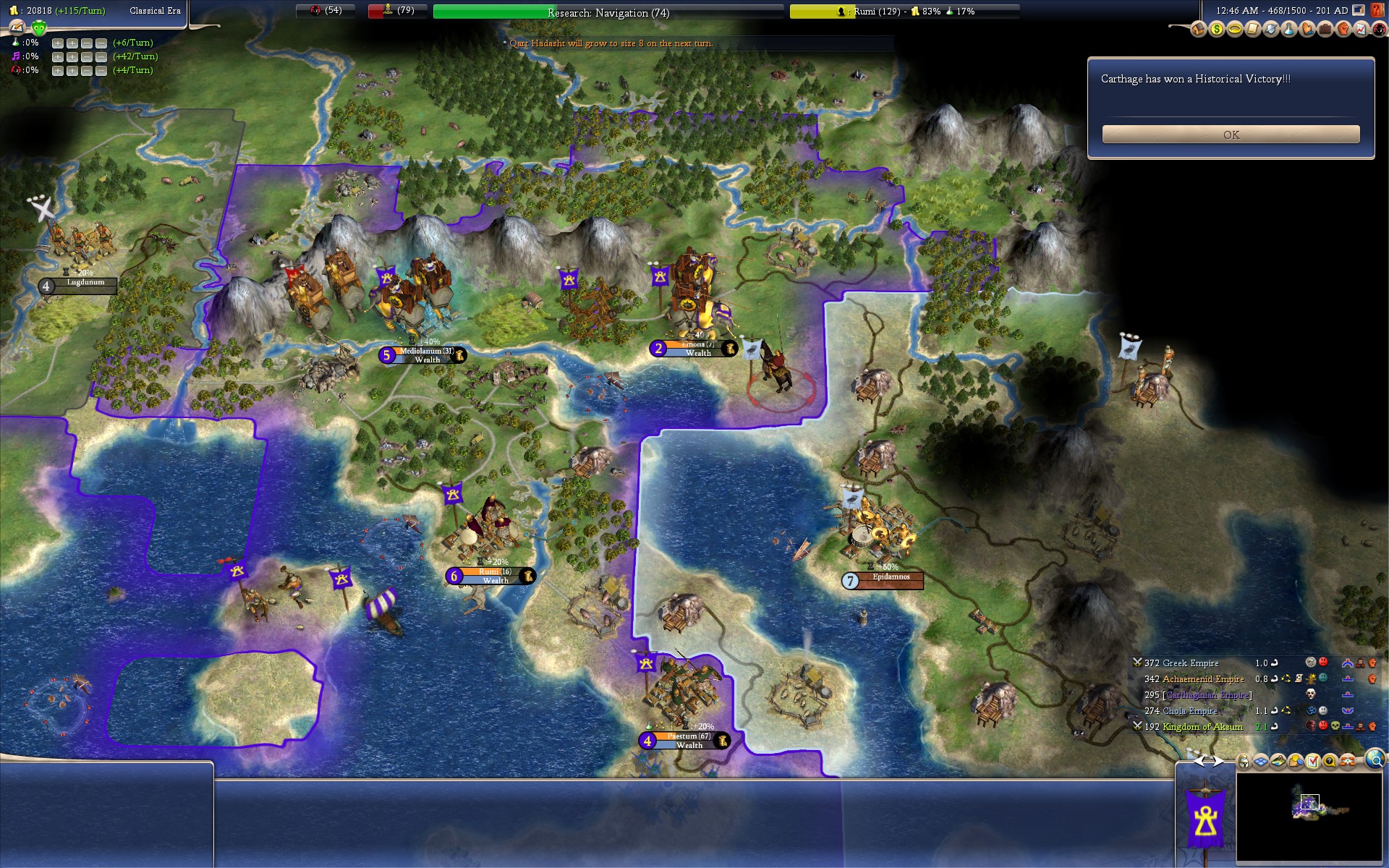 Spoiler A bit insulting, to compare me to Augustus Caesar... : 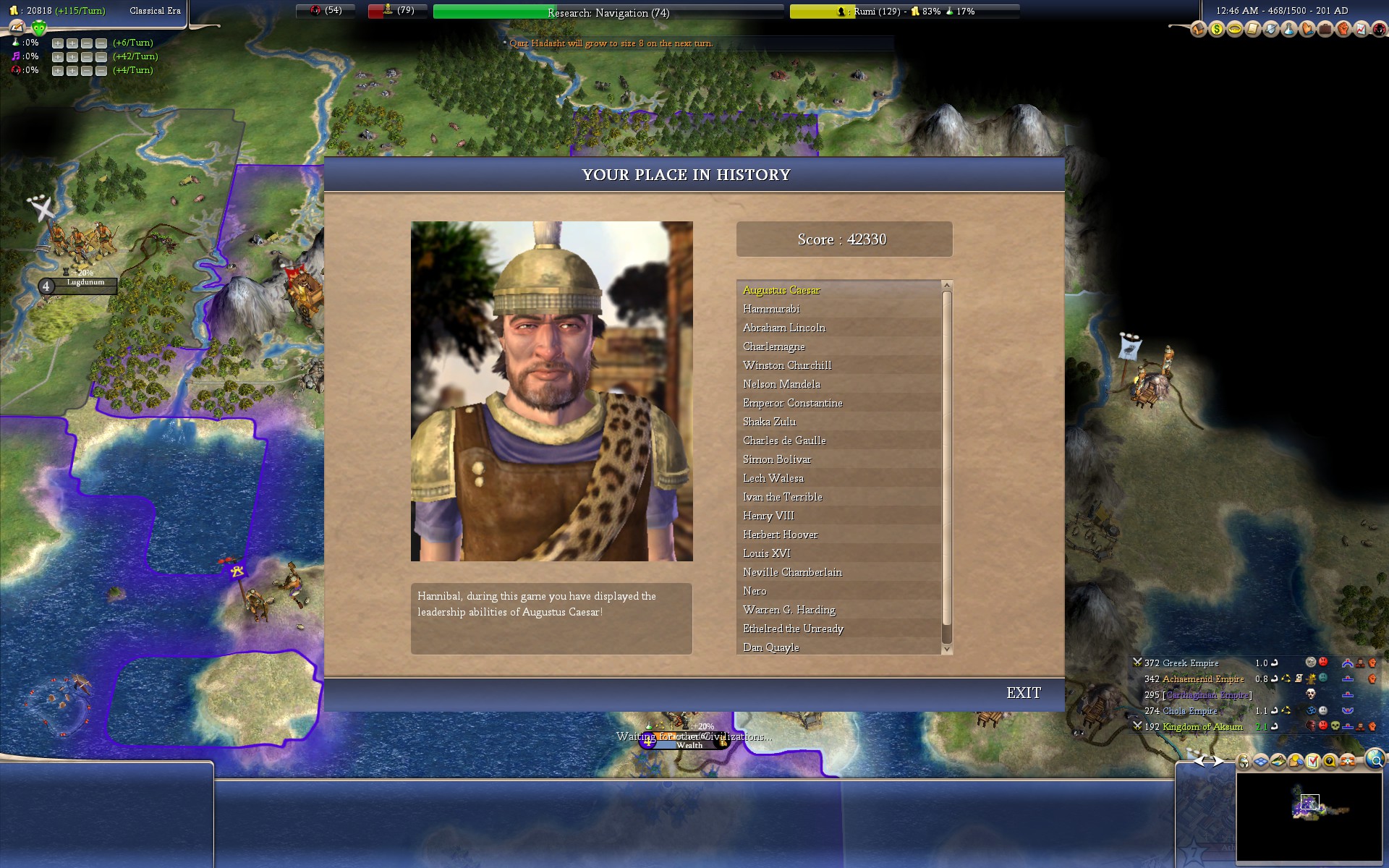 A few more tips from my playthroughs:
-Depending on how Greece founded their cities, you may have to ask for open borders, move through a Greek tile beside Cyprus, and then declare war moving into Athens, all in the same turn! It's about moving as fast as possible in the opening turns!
-Don't forget to turn culture back to 0% after you pop your borders in Carthage.

-You don't need goody huts to make this work, but they sure help! Iberia and the British isles tend to have at least 2-3.
-I turned my research up to 100% after building my library, but waiting until you get about 900-1000 gold isn't too bad an idea, to give yourself extra gold to deal with the Persian invasion/peace.
-Settling Iberia with your first produced settler will hopefully deter the Romans from settling in Iberia entirely! This was the case in my first game.
-If you can't collapse Rome before turn 385ish, you can actually prevent them from spawning in your territory by putting a unit on every tile in and around Carthage and Iol. However, they will instead spawn in around the city of Rome/any city of theirs you have captured. Plan accordingly.
-Carthage is the only city that should have a great person born in it, and he should be a great merchant. If running a specialist in Carthage, he better be a merchant.
-Norse galleys and barbarian war galleys will occasionally sail down/spawn into the Mediterranean, make sure you have a few War Galleys to dispatch of them properly.
-Do not research any technologies after "Currency". Stability checks occur after researching, and you don't need the stability system discovering that you have conquered half the Roman empire...
-Send any Great Merchants you get off to the east, to Persia or India.
-If you give Alexander tribute, in the last turns of the game, you have only bought yourself time, not a lasting peace.
-Acquiring the gold is the easiest part of this game. Don't sacrifice training a few more military units to keep on producing wealth. I rushed a few units, and I still finished with over 20k gold!

I think the only thing I would change in regards to playing Phoenicia itself is making it so that building the Great Cothon isn't so dependent on luck... It's really more or less a roll of the dice if the AI decide to go for this wonder, when really I think the player should have a few more turns to construct it. Maybe pushing its tech requirement up to Navigation, and letting Carthage start with Navigation? Or just changing how much emphasis the AI puts on this wonder?

I also noticed that I had two cities, my capital and my city south of the silver, that named themselves "Qart Hadasht". Possible bug?

Also with Rome, I don't know if it is possible for the AI to realize that their unique unit can both build roads and fight, but if the AI can't learn this, perhaps, for the AI only, the ability for Praetorian's to build Roman roads should be taken away, and given to workers. Great mod, every civilization I've played so far is so unique and I'm loving it!

Aug 1, 2022
Matara
M
G
Playing US and others on harder difficulties