I made a mod nearly two years ago but then I didn't have the time to keep it updated, especially as NFP kept adding or changings things each month. I've finally found the time to get it done.
--- 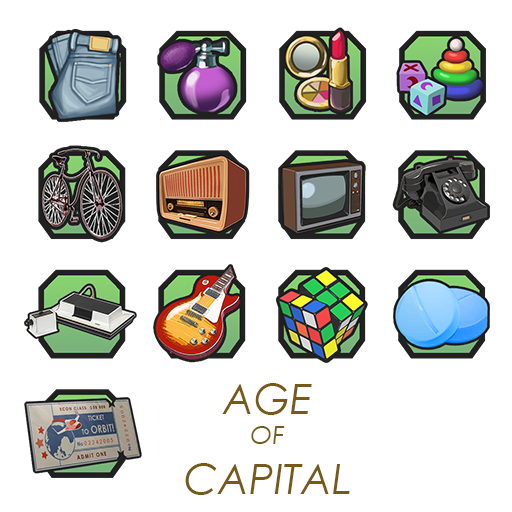 Age of Capital adds 9 new luxuries (manufactured goods) to the game and changes the existing four (Toys, Jeans, Cosmetics and Perfume). It aims to recreate the impact of manufactured goods in the wellbeing of human populations, starting in the Industrial Era. Goods created by inventors (Great Engineers) and entrepreneurs (Great Merchants) gain the upper hand in later eras in the maintenance of satisfied populations. Bonus resources are made more relevant to the Ancient and Classical eras.

Amenity Changes:
Bonus resources now provide +1 Amenity for their first copy (instead of 0). Bonus resources provided by allied city-states are no longer useless.

Consequences of these two changes: You’re likely to experience higher amenities than normal and an easier time achieving Happy or Ecstatic status in the early game and in your first few cities, thanks to the +1 from Bonus resources. However, as your population increases or you settle new cities, the need to access luxury goods will be increasingly felt.

(If you don’t like these changes you can cancel them in the file “Res_ManuGoods.sql”. I’ve written what you need to do.)


Manufactured Goods:
By the Industrial Era you should be feeling the impact of high population. You’re likely to have met most other Civilizations and already have access to a wide variety of luxury resources from other continents, yet these are increasingly not sufficient to keep your population content. This is when manufactured goods come in (full breakdown in the excel screenshot):

Most new Great People provide 3 of each copy of a manufactured good, which may be traded away.

Players with access to manufactured goods have the upper hand in late game direct trade. Unlike Luxury Goods, you can’t simply conquer your opponent and keep the goods to yourself. If a Civ that owns manufactured goods gets destroyed, all copies of that manufactured good are removed from the game. Doing so has the potential of causing widespread unrest on any other Civ highly dependent on those manufactured goods (you may take that as a warning… or as a suggestion).

*Nwabudike Morgan provides 4 Ticket to Orbit. 16 amenities may seem like a lot, but it’s basically a +1 Amenity to all (or most) of your cities at a stage in the game when it probably no longer matters. This is intended.

Les Paul (Great Musician) and Stewart Adams (Great Scientist) only give 2 of their respective manufactured good, and each good provides 6 amenities (instead of 8, like other Atomic Era goods). This is also intended. [In the future I want to give Les Paul a single Great Work, and Stewart Adams the +5HP to wounded units, like Al-Zahrawi. They’re too out of place atm].


Loyalty Changes:
Ecstatic cities now have +8 loyalty (up from +6);
Unhappy, Unrest and Revolt cities have -8 loyalty (down from -6);
Happy and Displeased cities remain at +3 and -3, respectively.

Victor provides +10 loyalty (up from +8). Garrison Commander provides +2 Loyalty (down from +4), but provides +6 Combat Strength (up from +5). The loyalty bonus was a bit incompatible with the intention of this mod. This makes him stronger in the city he’s located in, but less so empire wide.

Amani’s Emissary promotion now causes 3 loyalty loss, rather than 2. I want the player to have greater control over the loyalty mechanic and to be able to use it more aggressively.

NOTE: Only citizens can cause external loyalty pressure. This hasn’t changed. Still, by increasing the loyalty penalty from low amenities, your cities are less capable of enduring pressure from citizens in foreign cities with their jeans and fancy gadgets. Think 1980s on the “wrong” side of the iron curtain.

(If you don’t like these changes you can cancel them in the file “GreatPeopleMain.sql”. I’ve written what you need to do.)


Compatibility, other notes, etc:
Only Gathering Storm should be required, but I play with both expansions, all DLC, Leugi’s Monopoly++ and p0kiehl’s Luxury Resource Variety and Darker Dark Ages by default. A lot in this mod has been designed or tweak with those enabled.

I haven’t had any issue with several popular mods which add new luxuries, such as Civitas Resources, Latin American Resources or Sukritact’s Resources and Oceans.

This mod should also work as an indirect buff to tall play (+1 Amenity from bonus resources is particularly impactful in the first handful of cities) and Amani (due to more potential amenities from city states).