It's the 30th anniversary of Sid Meier's Civilization 1 this month so I thought I'd finally release my Attila's Conquest 1 – Play As Barbarians Scenario for both CivDOS & CivWin. This scenario is the first in a series where I attempt to play as the 8th Barbarian slot in each Civ game via hacks, cheats & editor tools and release a scenario for others to play as them too. Can you also overcome all the Barbarian disadvantages to defeat the advancing regular 7 Civs in this special 8 Civ survival scenario? Full details below… 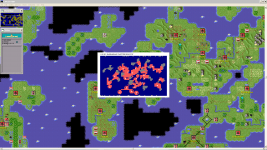 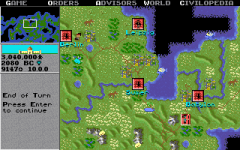 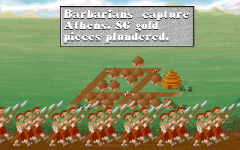 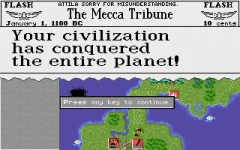 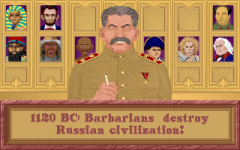 When I was a young boy playing Civilization 1 in the mid 1990s I remember coming across a hex editing guide for Civ1 save games and noticed that you could change the player controlled Civ to even the 8th Barbarian faction in slot 0. I tried it out and was amazed to see that it actually worked! There I was playing the red faction as ruler Attila the Hun! I had a fun game mucking around however due to the severe limitations on the Barbarians I didn't get very far and was quickly defeated.

Fast forward nearly 25 years and I decided it would be fun to try again and really see if I could find ways to actually win a game as the Barbarians and see what would happen when you kill all the other Civs. I created a thread at the CivFanatics forums to discuss strategies and if it was also possible to take control of the Barbs in the Windows version of Civ1 here:
https://forums.civfanatics.com/threads/playing-as-barbarians-in-civilization-1.632894/

I had recently discovered Honzas ‘DOS Tileset for CivWin' mod and made my own ‘CivWin Soundtrack Overhaul Mod' to convert Civilization 1 for Windows into a more DOS like experience. So I really wanted to play my Barbarian game in that instead of DOS however I didn't have much luck in starting a Barb game in CivWin so I gave up and played my game in CivDOS. After I finished my game I then discovered how to convert CivDOS save games to CivWin allowing me to now release my Barbarian game for both formats!

Fortunately these days there are some great map editors and Civ editor programs that allow you to design your own scenario and even change Barbarian cities to have or build any building or unit you want! Using these I was able to create a fun Barbarian scenario that actually gives you a fighting chance and then was able to go on and WIN the game trigger a full victory end sequence with no crashes! The editors I used were...

Check out my Barbarian tour & demonstration video to see how I used these editors and what issues you may encounter:
youtu.be/TyFLI_B_Cbg?list=PLZqnaGtTZxFbq3F5R6lqzyVvYzg9tRBPY

If you'd like to try out other Civilization 1 scenarios then check out my scenario preservation collection project:
https://forums.civfanatics.com/thre...preservation-project-log-10-processed.672488/

I had so much fun playing as the Barbarians that I decided to make a series of scenarios and videos showing you how to play as them (via hacks or cheats) in each Civ game include spin off games like Alpha Centauri and Call to Power! You can find the next scenario in this series Attila's Conquest II for Civilization II here:
https://www.moddb.com/mods/attilas-conquest-2-play-as-barbarians-scenario-mge

And more how to play as Barbarian video guides here:
https://www.youtube.com/playlist?list=PLZqnaGtTZxFbq3F5R6lqzyVvYzg9tRBPY

The good news:
You get lots of randomly spawning reinforcements, max luxuries however there is no rioting in barb cities, barb cities will build whatever the captured city was last building so you can manipulate if not using an editor, settlers will work the land and create cities, you can destroy civs by taking their capital after they make another city and then using a dip to bribe the city,

Finally, I learned enough skills to be able to do this.