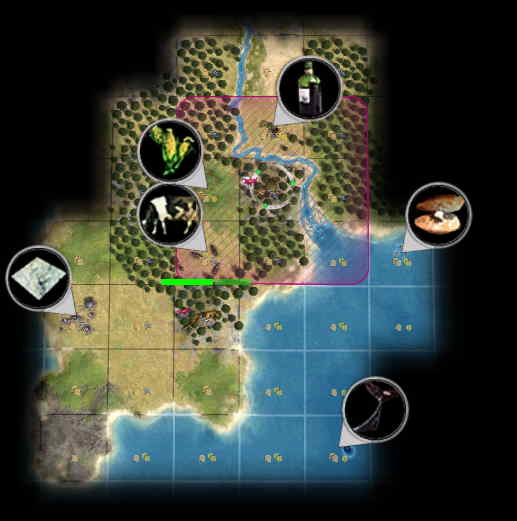 I declared war on Louis in 250, giving Mansu Musa a tech to join the war. Suleiman immediately declared on me; I think Louis bribed him in. I didn't want a two-front war, but I conquered France by 800 and the Ottomans by 860.

Since nobody else liked MM, I thought I'd backstab him next, but he peace-vassaled to me in 840.

The rest of the wars went quickly. I attacked Stalin in 900, and he capitulated in 940. Attacked Charlemagne in 1010. He bent the knee in 1040. Attacked Julius in 1060, he threw in the towel in 1080. I had to wait a couple turns to attack Roosevelt (I had begged a gold from him before starting the Holy Roman War), but I invaded in 1110. His capitulation gave me a Domination victory in 1150.

Not bad, but the wars went so quickly that I certainly could have optimized it by going for war production in all of my cities, instead of completing buildings that never had time to do much. I built Notre Dame in the capital, when happiness was no longer a problem, and I was working on the AP when the game ended, as if that might have been a faster route to victory.

Now everyone else can show me how slow I really was.

I got to a space win in 1665AD, on normal speed anything before 1700AD is usually fine in my book, so I guess I didn't play it too badly to my own mediocre standards lol.

As planned, after 1AD I annexed the Mayans and Ottomans to the empire without trouble, later also acquired Timbuktu and Djenne from Mansa, to sit at a comfortable 55% land with domination at 60%. For the rest a standard push to space, opted for the communist route. Libbed Assembly Line, to get production up and running as quickly as possible. Just managed to get the 5-man golden age in the end, I had enough variety of wonders in Beijing to get a reasonable mix of great people.

Thanks for the game DS.

I conquered America, Maya, Ottomans, France, and Russia while planning to go to space. At some point of my war against Russia, Julius accepted Stalin as a vassal, so I decided to take a city from him as well. I went with corps (Mining Inc and Sushi), which were duly spreaded to my 33 cities.
However, it was around 1500AD when I realized I would cross the domination land limit unless I gifted some cities away, but with a new BOTM available, I was too lazy to do it and just let it happen. Domination @1520AD for some 230k points.

Had a blast with this one.
As a true Chinese ruler, there was no need to harass my Russian "friend". Even without his land I managed to reach a domination victory by 820AD with a score of 252k.
A quick summary:
Roosie was the first one to feel the pain of the Chinese might, worker stealing in the beginning and wiping him out at 225BC.
At 1AD I already finished 1 golden age and got to 15 cities.
At 150AD Pacal was wiped out and he was so kind to build the Mids for me.
At the same year I finished researching Feudalism and 2 civs were so afraid of me that they offered to be a peacevassal. Suleiman and Mansa became "independent" states under Chinese rule.
At 520AD Louis was next to capitulate and he was kind to build the Paya and give CoL in the deal.
I immediately started a new MoM powered golden age.
During the GA Charly became my next target and I brought him to his knees by 700AD.
The last victim to fall under Chinese rule was Julius by 800AD to get me over the 60% land threshold.
PR jester

Didn't plan to take a late domination win but I happened to cross the threshold and didn't care enough to prevent it when I saw it was going to happen.

a Dom win for a Dom Perignon

to be had when my nation joins the MPP with the most powerful and mostly the most civilized nations on the planet (with some exceptions).
Take that

and may you fail in all your wars

. (Notice the blue and yellow coloring on the shield. It's not for Sweden...)
"Aurë entuluva!" Day shall come again!
Húrin son of Galdor, lord of Dor-lómin in Nirnaeth Arnoediad, the battle of Unnumbered Tears.
J.R.R.Tolkien, Quenta Silmarillion

"And those that were deepest and longest in evil servitude, hating the West, and yet were men proud and bold, in their turn now gathered themselves for a last stand of desperate battle."
J.R.R.Tolkien, The Lord of the Rings
You must log in or register to reply here.