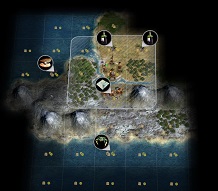 Soon after 1AD Hatty's stack of doom crossed my border and I quit. When a much stronger neighbour starts to plot war it doesn't matter that you share their religion and favorite civic, they will kill you anyway.
"Your bitterness is sweet to the Lady of Loss." Maybe the mapmakers have secretly converted to Shar and try to cause bitterness and loss. Or Cyric, and try to spred strife in the games.
"Aurë entuluva!" Day shall come again!
Húrin son of Galdor, lord of Dor-lómin in Nirnaeth Arnoediad, the battle of Unnumbered Tears.
J.R.R.Tolkien, Quenta Silmarillion

Submitted a domination victory. Managed to roll over Hatty with trebs and the elephants she had traded to me, with some LBs thrown in the mix. Once Egypt was left as a vassal on the island to her former west, started preparing for East Germany, who was by far the most advanced AI. He put up a decent fight, but the sheer number of cuirs out-did him. I reunified the Germanies with Fred having 2 cities left as a vassal, and to pay hommage to the Easterners, I switched to communism.

He was already researching rifling at this point, so glad I took him out before he got there. So now he could also conveniently hand me over replaceable parts and after getting rifling myself upgraded the cuirs to cavs and shipped them over to the other continent. Vassaled England and America, took out the Chinese. Meanwhile declared on Persia and got 4 of his cities on the island between us, but before I could invade his mainland and before he'd capitulate, my newly acquired cities from China and America came out of revolt and pushed me over the domination limit. Fun game, especially up until the reunification of Germany, after that it was smooth sailing.

I was demoralized with my early game in the BC and didn't really see a way to proceed. Then I got distracted with designing BOTM 238. After getting back to this game, an expanding cultural border on the small island finally opened a way to some more land. Maybe there was a way to proceed.

Hatty was trading Ivory to me, so I had elephants and cats to send against a barb city with a huge stack of archers. While building up my own stack, I waited too long to attack, and suddenly all those barbs were longbows. My first attack only eliminated half of them. I finally captured Olmec in 1370.

By that time, Cyrus had expanded into the western end of that continent, then granted all of those cities to his new vassal, Saladin. I went to war with them in 1460 and destroyed the Arabian Empire by 1665. Cyrus would not capitulate.

I started taking the battle to the Persian continent. I had captured one city, when Vicky launched a surprise amphibious invasion in 1745 that took one of my home cities!

Luckily, I was able to take the city back, but now I was fighting a two-front war. Vicky had iron, which gave her a significant military advantage with cannon and frigates, but after repulsing one more landing, I was able to pay her some gold for peace in 1818. Meanwhile, Mao had capitulated to Lincoln.

I finally captured Persepolis and forced Cyrus to bend the knee in 1838. By now, all of the other AI were far ahead of me in tech. Since our mapmaker had eliminated the peaceful victory options like diplomacy and culture, but inexplicably left us with the equally peaceful space victory option, all of the AI began the space race. Freddy and Hatty took their turns going to war with Lincoln/Mao, but Lincoln was able to mount a successful defense.

Vicky had an early lead with her spaceship construction, so I thought I'd try an invasion to take her out. I started ferrying units into an American border city. When I thought I had enough, I launched my surprise attack in 1947. Vicky had very few land units in her coastal cities, including the one harboring her fleet. My amphibious invasion eliminated that fleet--sweet revenge! Vicky struck back and recaptured one of the three cities I'd taken, then it settled down to a long war of attrition. I took London in 1964 and York in 1966. Vicky still wouldn't capitulate (although I didn't want that, which would have left her time to complete her spaceship) and she wouldn't give me any tech for peace.

I signed a ceasefire for some relief from the war weariness and to rebuild my forces.

Frederick completed and launched his spaceship in 1981.

His army was vastly superior to mine, in tech level and in numbers, so invading and capturing Berlin to destroy the ship enroute (by that illogical game mechanic) was impossible. I let the clock run out and Fred won his victory in 1991. 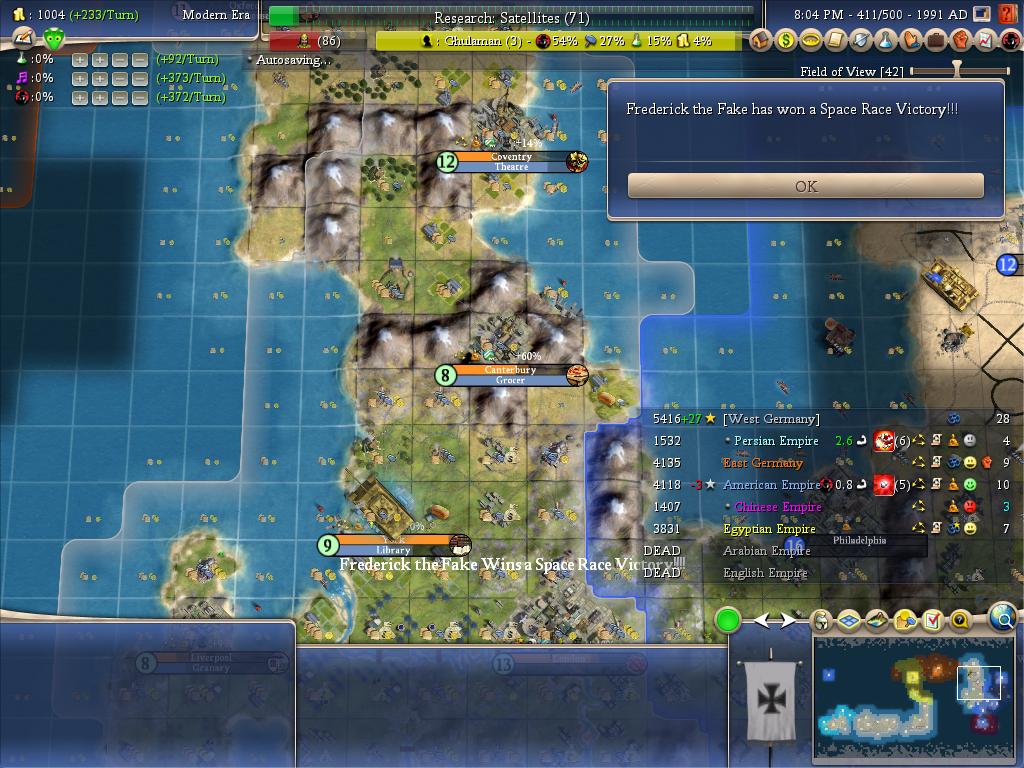 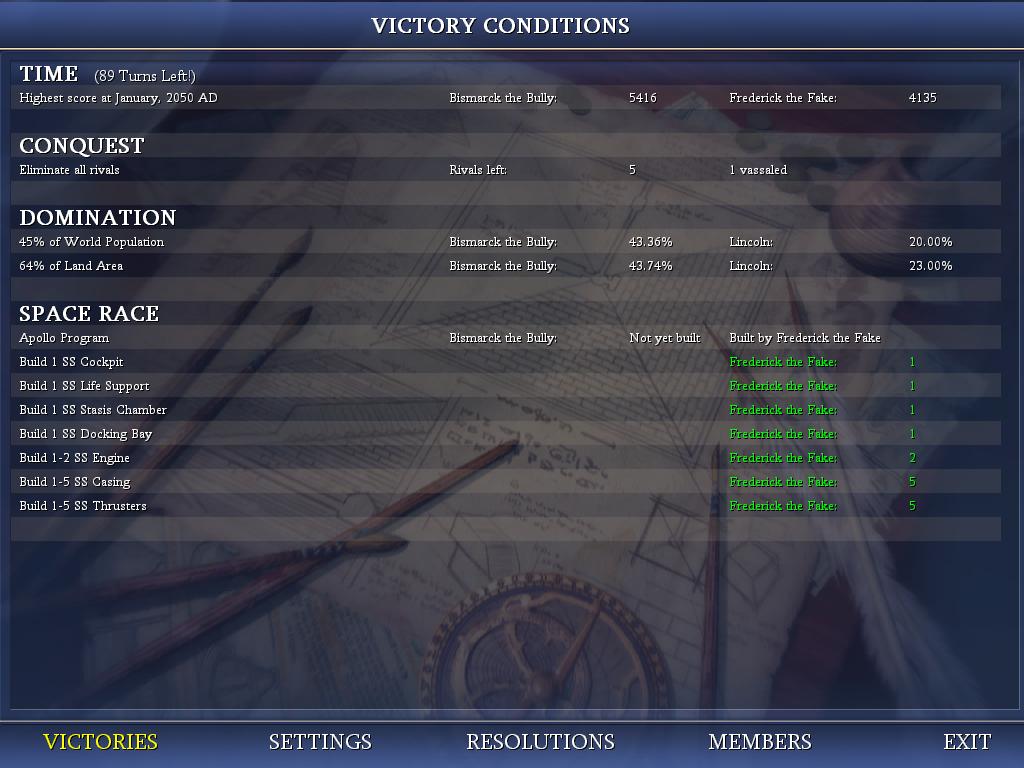 So...I have the consolation of being first in score and close to the domination limit in population (but far short of the limit for land), but I couldn't overcome this game's handicaps. Hopefully, this will be good for a green ambulance.

MarleysGh0st said:
so invading and capturing Berlin to destroy the ship enroute (by that illogical game mechanic)
Click to expand...

You don't think blowing up the enemy's space command and control centre should stop them winning a space race?? I find THAT illogical

MarleysGh0st said:
His army was vastly superior to mine, in tech level and in numbers, so invading and capturing Berlin to destroy the ship enroute (by that illogical game mechanic) was impossible. I let the clock run out and Fred won his victory in 1991.
Click to expand...

Your post reminds of an earlier BOTM, one Mali Deity game with a huge wheel map. I used spy economy to grab all techs from my powerful Inca neighbor and kept using spys to destroy his spaceship parts. But later I found out Inca started using spies to destroy my parts too. We kept undermining each others spaceship ambitions while Justinian launched his.

Noble Zarkon said:
My intention was to make sure this game went long enough that the German UU and UB might come into play.
Click to expand...

It did that. But they would have come more into play, if the AI couldn't take the spaceship path. I might not have conquered, but I could have won on time!

MirrorGuard said:
Your post reminds of an earlier BOTM, one Mali Deity game with a huge wheel map. I used spy economy to grab all techs from my powerful Inca neighbor and kept using spys to destroy his spaceship parts. But later I found out Inca started using spies to destroy my parts too. We kept undermining each others spaceship ambitions while Justinian launched his.
Click to expand...

I had to invade England, because Vicky would have been first to space, if I hadn't stopped her. And while that let Freddy finish his ship, Hatty was nearly finished. (The game only shows us the leader, but she briefly held that position, with only one component left to finish. If she didn't launch before Freddy's ship reached Alpha Centauri, it's because the AI decided there was no point.) So, even if I had switched my focus to Freddy and been successfully in that effort, that would have allowed Hatty to launch. And Lincoln probably wasn't too far behind, either. Just too much to deal with!

I retired around 1570 after having taken the relatively backward Cyrus as a vassal sometime before. That still left me without iron to upgrade trebs to cannon, though, and it was going to be tough going against Hatty without that. I was hanging in there techwise, but building an iron-less force to grab enough land from her to get her iron was going to take awhile, or maybe never happen. Either way, I couldn't afford the time. Taking on Hatty earlier by using her elephants against her was the way to go, but from what I recall, that didn't look easy at all.
Last edited: Jul 18, 2022
[size=-2]"Many things that are natural should be stepped on, hard." -- Arthur C. Clarke[/size]

When my caravel reached the other continent, I met Lincoln first. He had 11?cities, among which were London, Nottingham, Hastings, York~. How did he consume Victoria?
My guess is: There is a barbarian city named Harappan popped up to the SW of London. The only metal(copper) to which the British could have access was within its BFC. That city was later taken by Lincoln. So neither West Germany nor Britain have strategic resources

. Unfortunately, Mao and Lincoln waged war against her...
When I united my continent and sent my advanced army against Lincoln, Lincoln was at war with Mao and 1 turn later he took 1 city from Mao. After killing 1 big stack of knights, I called for a ceasefire to regenerate health but forgot that it was my intervention that stopped Mao from being Lincoln's vassal. Mao immediately surrendered.
Even after I took most of American cities and Mao's land, population and ?(I forget the last criterion) well exceeded the threshold, the British broke free and surrendered but Mao was still loyal to his master for many turns. Is there a minimum number of "loyal turns" for a war vassal?

Tough emperor game, but winnable.
However, I was away for the last few weeks, so I wasn't able to finish what should be a lackluster/late space race game.
I submitted a 1470AD incomplete game where I was leading in tech, # of cities and land, mostly expanded onto Cyrus in the southern island.
One gross mistake, which would have hurt me a lot, though, is that I had been the 1st to Lib in 1380AD, and stupidly chose Physics over Communism, and the colonial & distance maintenance from former persian cities started to put a hard toll on my economy in the last turns, totally avoidable if was running SP.
Never mind, happily moving on to the new BOTMs.

Hi @Noble Zarkon, I was curious about the results of this game, it's been just over a month since submissions closed and if I'm not mistaken this one hasn't been published yet. Also curious if #241 is in the making...

I realise it's summer and there are many other things to do, but wanted to ask anyway.