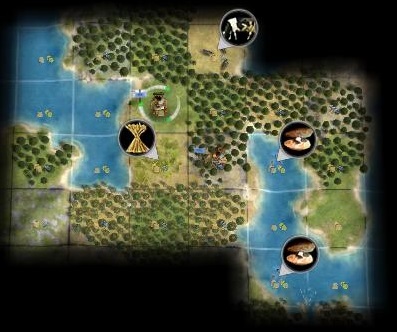 Did you make the world safe for Democracy? Did you win?

Well, with a week to go, I know there are six of you who have completed the game, so far. Even if you don't usually post in the spoiler threads, I hope you'll leave a little feedback here, to encourage a newbie mapmaker.

And anyone who hasn't finished the game yet shouldn't be reading this thread!

In the (very late) end, I achieved a cultural victory. My colony ship was still some years from Alpha Centauri and most others were locked on wars. Hatty was still many decades from cultural and no others were even close to launching their colony ships. One AI used one tactical nuke on an unimportant area, otherwise no nukes were used. I had an ICBM or two. I was lazy and only conquered most of China. Babylon was friendly so there was no need to waste time on them. With all the entertainment wonders I could trade enough sushi and mining resources to keep those corporations running on my every city.
I didn't really use much of the democracy early on, slavery has its' uses and it's not useful to waste gold on production in the early game. Also the statue was expensive and I wanted and built most of the other wonders (or tried to anyway).
A nice twist to give us democracy from the start. Maybe give us future games with some nice civic unlocked from time to time. Shaka with Police State, Isabella with Theocracy and a divine mandate to convert everybody, willingly or not..., Gandhi with Pacifism, Montezuma with Slavery and the sacrificial altar.
Don't forget (guarded) treasure islands in the oceans, Humbabas in the wilderness, golden Rings in the Rhine, Arkenstone in Erebor, mithril in Moria, Sauron in Kremlin, ahem Barad-dûr...
"Aurë entuluva!" Day shall come again!
Húrin son of Galdor, lord of Dor-lómin in Nirnaeth Arnoediad, the battle of Unnumbered Tears.
J.R.R.Tolkien, Quenta Silmarillion

High King J.J. said:
Maybe give us future games with some nice civic unlocked from time to time. Shaka with Police State, Isabella with Theocracy and a divine mandate to convert everybody, willingly or not..., Gandhi with Pacifism, Montezuma with Slavery and the sacrificial altar.
Don't forget (guarded) treasure islands in the oceans, Humbabas in the wilderness, golden Rings in the Rhine, Arkenstone in Erebor, mithril in Moria, Sauron in Kremlin, ahem Barad-dûr...
Click to expand...

A fine set of suggestions!

I have to admit I struggle with land heavy mapscripts like the one we played in this game. It kinda forces the player to have a huge number of cities to be competitive.
That said, I enjoyed playing it, because at least to me it felt more challenging than the average monarch level game.
The relative distance from the closest neighbor, and the fact it was a protective one might have contributed for this feeling. The absence of marble and stone, for the wonders we could benefit from being PHI also hurt, not mentioning the lack of Aluminum for those who pursued a space victory.
About the Democracy gift, it took me a while to benefit from it, built SoL @580AD. I did run Emancipation later in the game, but I felt it hurt my game more than it helped.

Summarizing my sloppy game, I conquered continental China in a 1000+ year long war (150BC to 1080AD). Sometime later I took an island city to eliminate them.
Much later (1460AD), I invaded France (mostly to capture Paris with MoM, so I could boost some 3 Golden Ages with my GP's). Louis capitulated in 1585AD.
Hammurabi asked to peace vassal and I accepted but that had no influence in my game.
Spaceship landed in 1765AD.

Thanks for the game, @MarleysGh0st !

I settled out to 20 cities as planned and built the Great Library. I was 50/50 to get a GE as my second GP thanks to HG and I got it, which I used to rush MoM and then start a GA from music. I adopted bureaucracy then as well as emancipation and US too. From that point onwards, I stayed way ahead of the AI in tech for the rest of the game. I later got another GE which I saved to rush Taj and libbed rifling and switched into nationalism and went on a drafting spree. I decided to simultaneously attack both Hammurabi and Charlemagne. Charly had been in a war with France for awhile and had been losing cities. By the time I was ready to invade he'd capitulated, so Louis was next on my hit list. Invasions started around 1180 AD. Besides drafting, I also bought out a decent amount of cavalry to lead the southern invasion, which in hindsight was probably suboptimal.

Charlemagne fell pretty quickly both thanks to the cavalry and his lack of stacks due to his previous war. The campaign against the Babylonians was a little more drawn out since he had some 20+ cities to go through. Hammurabi had built the Statue of Zeus and before too long, between my war with him and all the battles taking out Louis's rather large medieval army, the war wariness got quite large. By the end I had over 800 WW with each of them! I conquered all of Babylonia's on continent land as well as got some islands in the peace treaty and decided to make peace with Louis after taking Paris and his southern lands. I had the option to vassal France but I decided not to.

One interesting note about these wars is I'd been avoiding researching astronomy and so had a large fleet of galleys shuttling troops around. And this was an instance where the ironclad, a unit that I often don't give much thought to, was quite good. The four ironclads that I sent to lead the Western fleet killed off some 40 Babylonian caravels plus a handful on Galleons without taking a single loss.

I gave the corp route a try and founded mining and sushi in 1340 AD and 1470 AD. And wow, once those get up and running its pretty ridiculous. For most of the game mining was around +25 hammers and sushi around +22 food per city. I spent a long time with wealth at 100% just expanding the corps and buying out buildings in the newly conquered lands. I'd never launched a spaceship before so decided to see what's involved. Definitely went a bit over the top on the economy building as by the time the spaceship landed in 1775 AD I'd researched future tech 17 times

. Though the Chinese did have a hand in that too as they sabotaged one of the parts the turn before I was going to launch.

Overall I ended the game with 63 cities with both corps spread to all of them. Winning as quickly as possible wasn't my objective this game, though if I'd switched over to police state at some point or accepted Louis as a vassal I probably could've won by domination or even UN vote a lot faster as I ended the game with 50% of the land.

I gave up my Deity game at 1730. Once I'd finally laid down a lot of cottages, I switched to Emancipation to accelerate their growth, which I think paid off pretty well. Once I had a good number of towns I also switched to Universal Suffrage to get the extra hammers, but eventually switched to Representation when I could. I was second to Steel--I think around then I attacked HRE, took five or so cities and get him to capitulate. It would have been nice to continue against France, but they were a bit ahead of me in tech and had a LOT of units. I therefore ferried my units back home to attack Babylon, which went pretty well, although not very fast because he had a TON of destroyers and it wasn't safe for my galleons or transports to move units around quickly. I think I took around six or so of his cities and then France attacked me. I whipped and drafted a lot of units in former HRE-land but it was nowhere near enough, especially not against tanks. France took all my possessions there before long and it was going to be hard and/or expensive to get peace. I continued grinding away at Babylon but WW was getting quite bad. I might have been able to pull out a win but it would be a long hard likely frustrating-in-the-end slog and I don't have the time. Hmm, we haven't had a Small map in quite awhile.

My SoL effort did not get support from RNG. I got a GM instead of GE at 50/50 odds. It put me in a situation of conflicting civic interests. Decided to run a golden age earlier than planned, switched to caste/paci/vassalage/unisuff to combine production effort through workshops, with GP generation and 5XP unit production. Got some play out of unisuff on rushbuying some granaries and LH's in the latest founded cities. 560AD I finished SoL.

Meanwhile I teched the bottom part of the tree and picked up Music for the free GA still available at 860AD. At this point I have a GM trade mission underway and 4GS ready. Now I get a 10% odds GE. Cute, I will spent it on Taj. Finish astro with a bulb 900AD, GP and Chemistry the next turn and MilScience in 940AD. Time to upgrade galleys/triremes/maces and invade. Frigate bombardment and a solid clean up unit is pretty fast wrap-up on a map like this. Still quite some distances to sail.

Qin capitulates already after 1 city taken. Once more I forget to put capitulation in a peace deal, here with Louis. I add cannons to the mix and go into a double golden age around 1100AD.
Charly next, and Cyrus and Hammi resist till around 5-7 cities taken. Hatty and revisit Louis almost simultaneously gets them both after the first cities taken.

This is the first game ever that I never ran Bureaucracy I think. Last part of the game it was Rep/Nationhood/Theocracy and eventually State Property (Lib => Communism). I had great workshop production power pretty early and plenty of food. Just maintenance after several conquests started to hurt and scream for SP.

I like those games where you get a little bit of extras, such as Democracy in this game.

Unfortunately couldn't finish this game. Nice map, but slightly too large to fit in my July schedule. Hope to find more time in August!