Took Montys two remaining cities and got a conquest victory in 75 AD.

Thanks. I wouldn't be surprised though if someone finished conquest in the BC's.

It was a fun game that illustrated very well the power of the impi. I also liked the small map that made the game faster to play. I rarely finish games because it takes too long, especially on the higher levels (immortal, deity). For that reason, I would like to see more games on small maps. A small map makes the game easier, but that could be compensated by making challenger saves where the AI is given extra stuff like settlers or workers. Not that I would play those very often, but some players might like the extra challenge.
P

I liked the land Shaka had available, so chose to settle peacefully first rather than conquer.

SIP, killed a scout from Genghis and Monty and made peace. Ragnar kept his units hidden.
Killed some archers from Toku but he refused peacedeals. Then he serves the Zulu with this party:

One Impi chases all his workers + settler away from Banana, the other Impi collects them 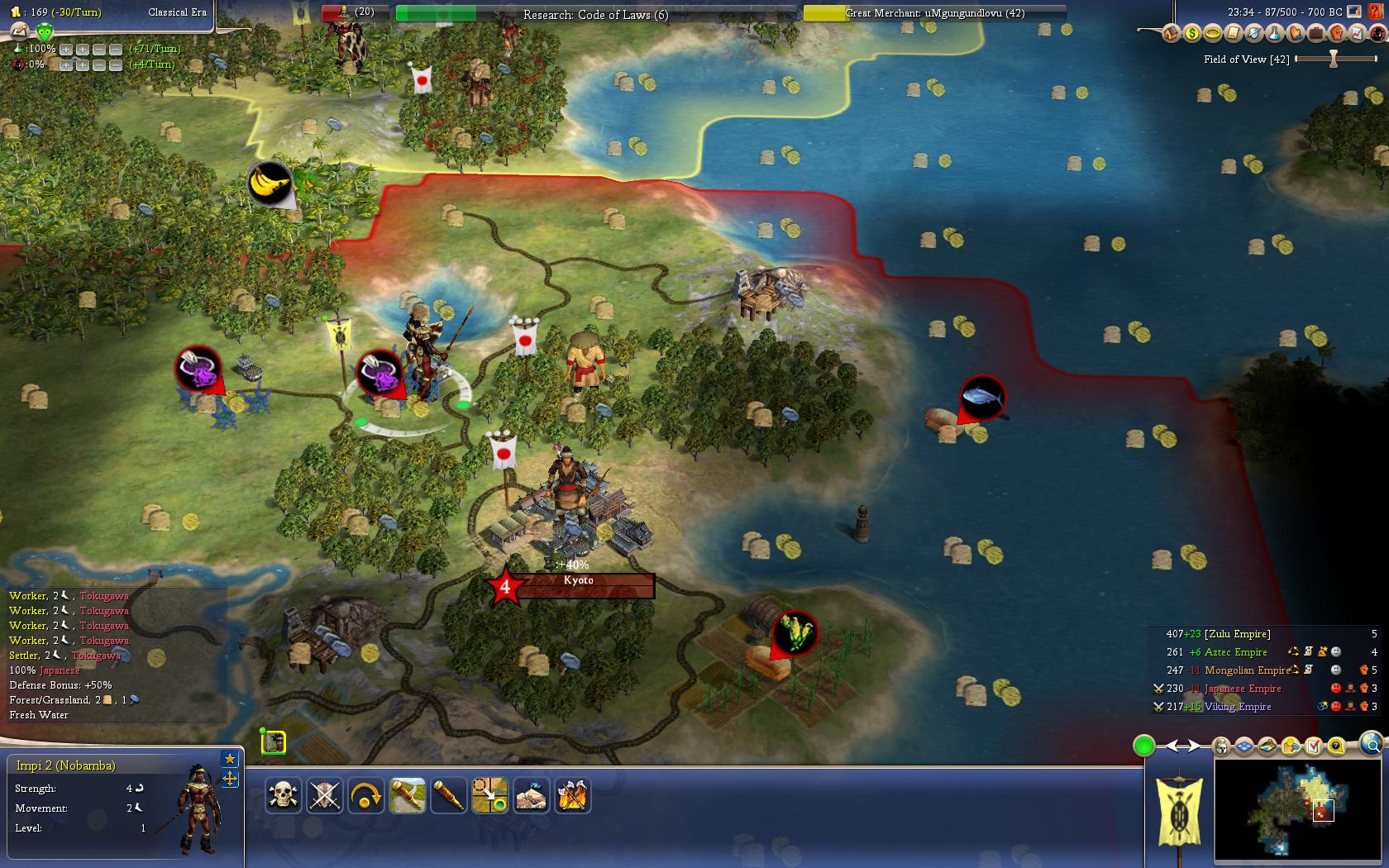 Build GLH, Oracle => Civil Service (± 600BC), Build Colossus, Circumnavigation before 1AD as well
Initially Monty and Genghis fight. Monty conquers 1 city. Later (early AD's) only Genghis versus Ragnar keep fighting, Ragnar loosing cities.
I notice the tech pace is super slow. Nobody is ever going to reach Feudalism it seems. My plan is to conquer with knights and settle enough for domination. However Toku keeps expanding exclusively northwest, blocking my own expansion, so he gets to deal with HA's. After finishing him it's less than 10T to knights and I have 16 strong cities to roll out my plan resulting in a for me unusual early domination 1050AD.

The warmongering AI are pretty relentless on Deity difficulty.

I wish I was wise enough to go for widespread choking, but I opted for distant fortress cities to soak up Monty and Genghis while I used used religion and (Liberate) to friend Ragnar.


Anyway, beat up Toku, then had a very fun war against Monty and Genghis at the same time.

No wonders without marble and stone.

Police State at the start had me building units forever

So, so broke on gold.
A lot of teaching was done through peace deals.
Kaitzilla vs. The World
The Largest Civ 4 Deity playthrough in history!​

Kaitzilla said:
Anyway, beat up Toku, then had a very fun war against Monty and Genghis at the same time.
Click to expand...

But did you win?

I suppose if you hadn't, it wouldn't have been so much fun.

MarleysGh0st said:
But did you win?

I suppose if you hadn't, it wouldn't have been so much fun.

The small map kept the warmongers from going too wild.


An amphibious assault almost got me good at the start. 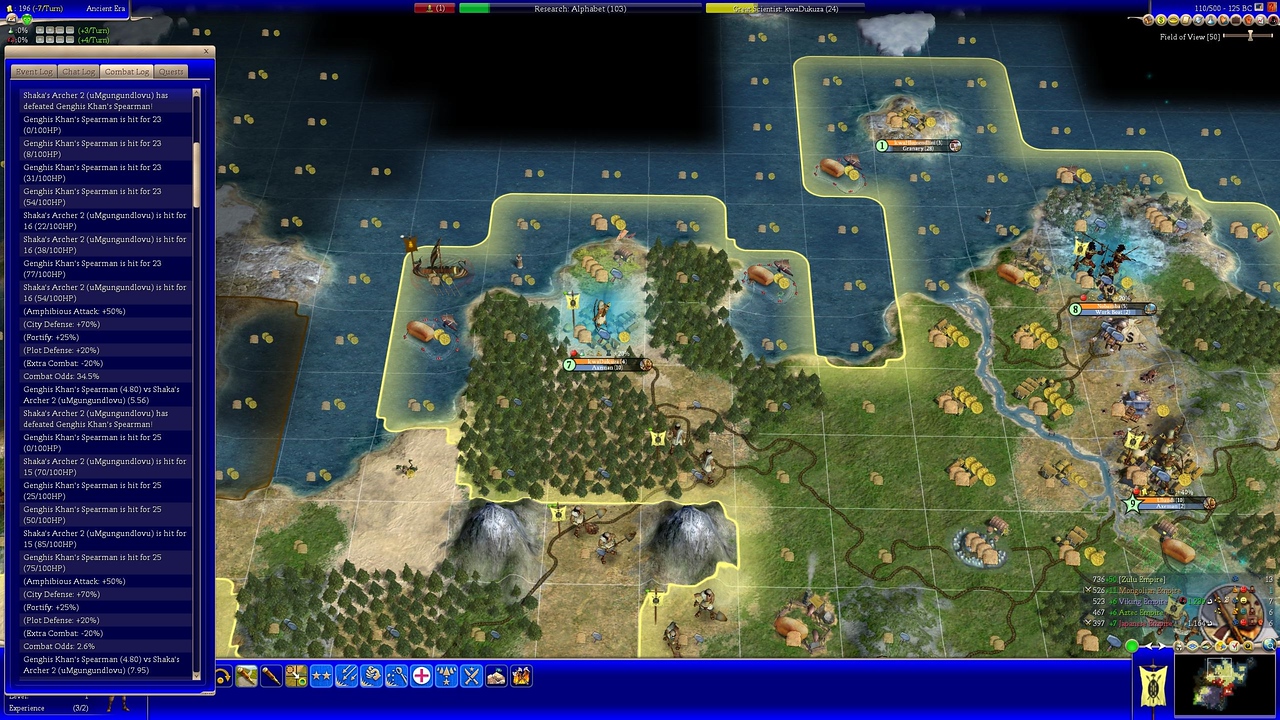 Later, I was schooled in just how long an AI will refuse to talk peace if they DOW the human (or get bribed to DOW) instead of the other way around. (twice as long in turns

Monty was thankfully pretty quiet after capturing my most southwest coastal city.
A couple turns of him bombarding down the new wall, then the small party of defenders retreated while 1 more unit was whipped in the city to make a last stand.
Exactly as planned.

I barely build expensive Trebuchets anymore.
Or bombard cities down all the way unless the defenders are strong and on a hill.

I hit the city with 4 suicide Barrage I Catapults.
Or 3 suicide Barrage II Catapults followed by a City Raider II Trebuchet.
A lot of times the top defender only has a 30% chance of not taking any damage from the suicide catapult, so by the time the Treb rolls up it has great odds to survive.
Whether the city has 100% defenses or 0%, whether the attacking Catapult is full hp or 0.1 hp, all the collateral damage is the same.
If the top defender gets lucky and still has full hp after the suicide catapults, I might try to assassinate it with a City Raider III Sword or Mace before sending in the Trebuchet to get the last collateral damage attack in.

guaranteed on each city or enemy stack hit by the suicide catapults, but I'm not waiting around for the artillery to heal up.
Or standing around lots of turns shooting down walls too much.
All that matters is getting all the defending units except the one on top down to 50% hp.


One case where I might not like mass suicide catapults?
A city with a lot of multiple-Drill-promotion units, Catapults, Trebuchets, or half-hp injured units is just going to soak up new collateral damage like crazy.
That city might need a more traditional attack of 0% city defenses and lots of city raiders.

I guess a Trebuchet heavy game now for me would be one where I'm sure I can upgrade a lot of them to cannons.

I'll keep trying it and say something if I fall out of love on the suicide catapult idea.

(5 vs. 4).
I keep forgetting that 50% hp through collateral damage is only really possible if the

of the defender matches (or is less than) the

of the Catapult or Trebuchet.
Using Catapults or Trebuchets to try to collateral damage down Rifles or Infantry isn't going to work very well.

Last edited: Today at 12:34 AM
Kaitzilla vs. The World
The Largest Civ 4 Deity playthrough in history!​

I'll have to try your idea with the catapults. I know my wars plod along way too slowly, when I'm bombarding down those defenses. Particularly when they're starting at 100% and I'm using cats and trebs.
You must log in or register to reply here.