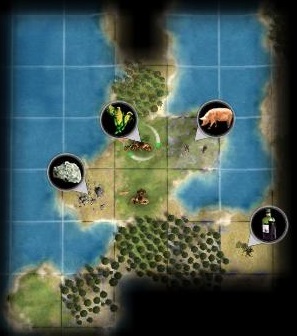 Game abandoned. I was happily fighting SB, when Saladin attacked me out of the blue with well appointed and well-coordinated SoD

I really enjoyed this game, which ended in conquest after killing Saladin and vassaling the rest. I also got to appreciate the conquistador as a unit, I found the bonus against melee quite useful. Pikes were much less of a pain and notably few losses against maces.

As so often it ended up a typical push to libbing MT and cleaning the map. Annoyingly couldn't build the Oxford in Madrid as I forgot that in Moai and NE I already had 2 national wonders, after all these years keep making this mistake a bit too often lol. Oxford wasn't all that important anyways though.

As to the fighting, I had an early beachhead on the Arabian/Ethiopian island, right on the gold source just east from us. The Arabs had the MoM, which was a reason for them being the first target and for capturing the whole empire rather than just vassaling. With their strangely shaped island it took a century to get it all, but from there the other AI fell relatively quickly. First the Ethiopians after their 2 main cities on the Arabian island were captured (with a boatload of wonders), from there sailed to subjugate the Khmer and then the Indians. Meanwhile built up a secondary force that attacked SB and finally both forces converged on the Chinese.

Fun game, I guess a bit easier than regular immortal thanks to the extra tech, the fact that AI tech pace wasn't great with their religious differences and because we got the most generous island by quite a margin. But I'm not the one to complain about such things.

I think i might have made some early game mistakes that gave e a setback... setteled one south and colonized the island while building GW and Pyramids. Failed to turn on my economy in time due to late cottage spamming. I had about 6 (good) cities at 1AD (which is quite normal for me (i'm monarch/emperor player); i never understand how people can get 10 cities by that time and have a running economy... feel free to help me). After this i recovered from being behind in technology and pointed my eyes to Saladin. I captured 2 cities in a quick clean war as i planned, but then one after another started DoW to me... that caused me again a lot of diplomatic effort but i managed to set peace with everyone without losing a single city. but afterwards i was again WAY behind in tech. i gave it a good try coming back but my cities were suffering heavily from the lack of Emancipation and in the end Zara declared war wit tanks agains my rifflemen.... I decided it was time to retire... 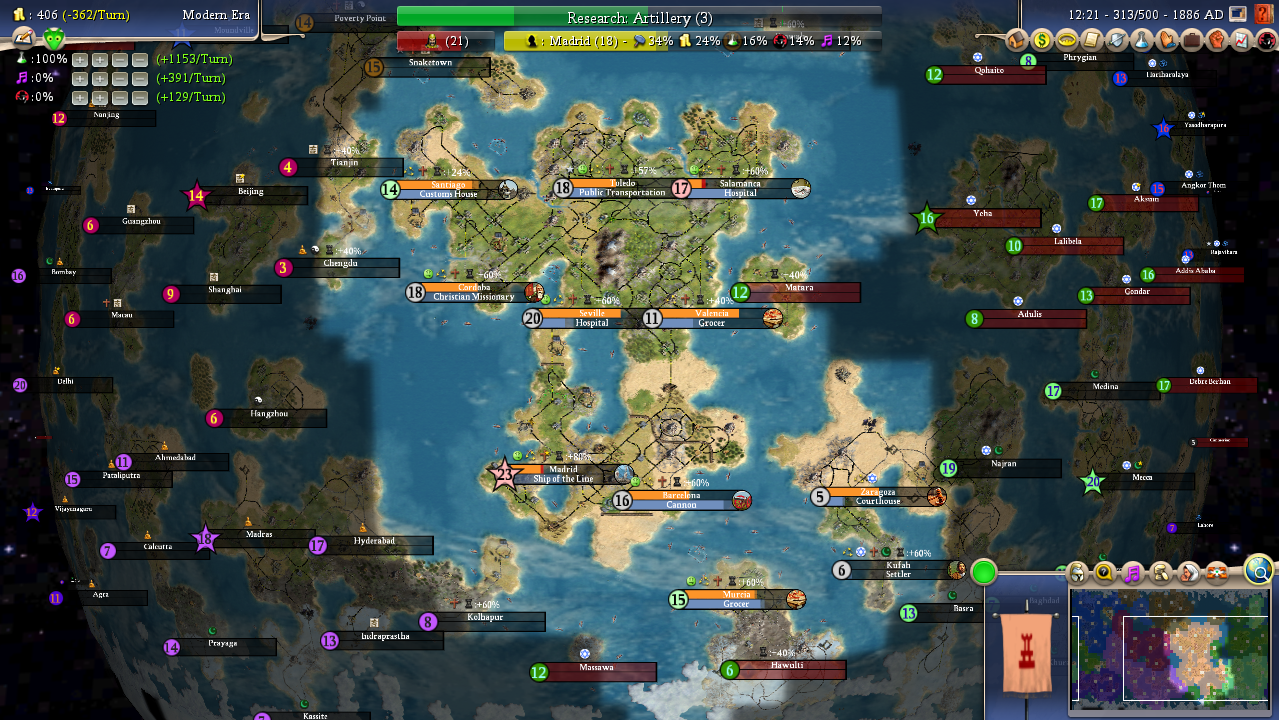 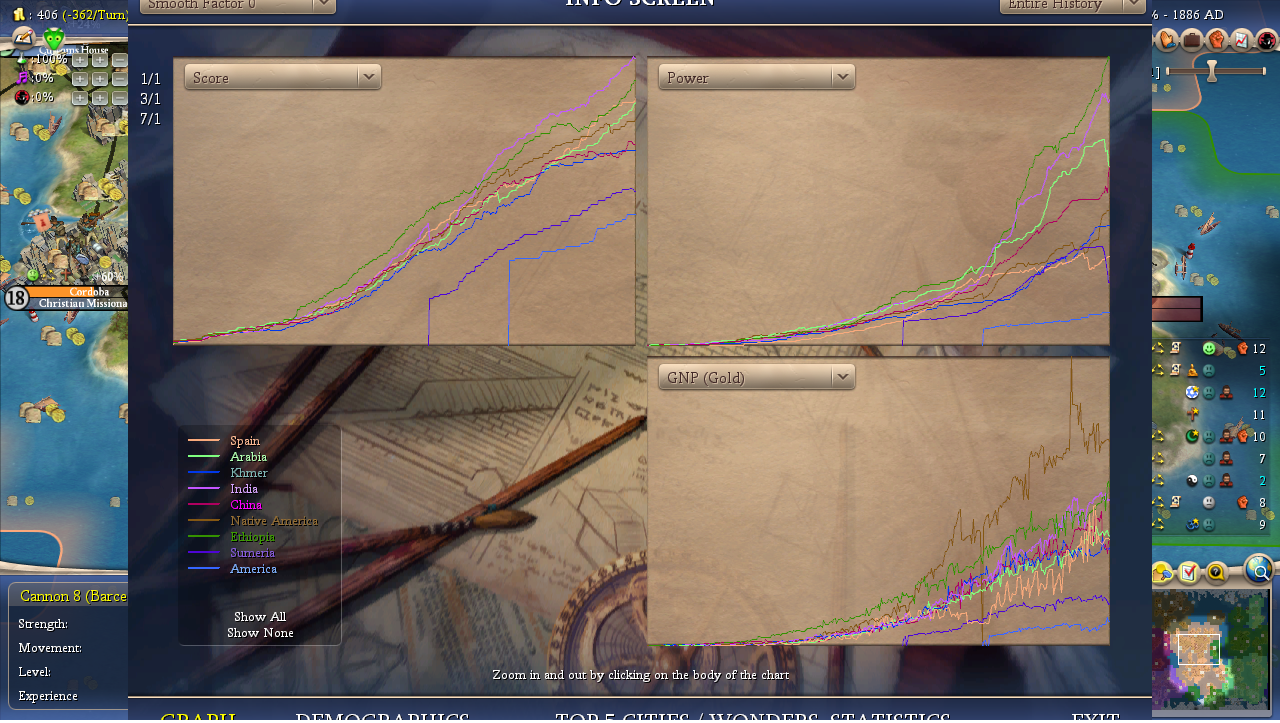 one interesting point: in my game it looked like Sitting Bull was aiming for cultural and diplomatic victory (i had never seen that)

i will post my save when the servers are online again

Deity was quite the battle on this one.

Had to walk a diplomatic tightrope, very carefully traded techs, and got no wonders for myself hardly.
There was a nice marble in the icy land northwest of Sitting Bull.

Easiest front was Saladin's island.
Had to watch out for colony costs after getting a few cities on it.

Ended up gifting Saladin 3 cities near his capital for +4 Liberation diplo.
1st war was 1000AD against Zara to seize the Great Lighthouse.

Citadel + Theocracy + Christianity for 5 turns got me a 10xp Catapult to unlock Heroic Epic.

Qin had a juicy island and Sitting Bull had tons of marble wonders, but I successfully resisted attacking their protective Longbows until the end.

Quite the odd game.
Great Prophet bulbed most of Philosophy and Great Artist bulbed a lot of Nationalism after I got Divine Right.

After that, another low odds Great Prophet couldn't bulb anything.
Kaitzilla vs. The World
The Largest Civ 4 Deity playthrough in history!​

Continuing from the first spoiler thread...

After a quite peaceful period, the Chinese chose unwisely to attack me in 880AD, capturing an undefended city very far away from my core island. They were completely eliminated in 1250AD.
In 1270AD we declared on the Khmer, and they were out of the game in 1470AD.

At that point we had quite a strong economy, and we were well suited for a space race victory.
But as I thought RL would be busy in the following days before game submission deadline, I decided to cut some corners and settle for a quicker UN victory instead.

In 1520AD (t214) we learned Mass Media, and finished the UN in 1 turn with a GE (t215). We were elected SG and then would run against SB for diplo win t224, so to enhance my chances I thought I should sign DP's with Asoka and Saladin, IN THAT ORDER, but I messed up and signed with Sal first, causing Asoka to drop to pleased and vote for SB instead.

Gifted away lots of techs to Asoka in the next few turns and got him friendly again.

But on t228 - a turn before next election - SB created a colony (Washington), and according to BUFFY mod advisor he would not be my opponent anymore (his own pop dropped below Saladin's and Asoka's). In the beginning of t229 I just cast my vote and did not play the whole turn, as I was so pissed off, and I saved the game and put it to sleep for a week or so.

Today I loaded it up again, considering my options (even discarding the frustrating diplo and gearing up for space again), made a few moves and adjustments and hit end of turn.
To my astonishment, I got the message "Isabella wins a diplomatic victory" right away (got Saladin's and Asoka's votes) and learned my opponent had been Sitting Bull, not Saladin as indicated by the advisor!

Maybe as in RL, in this game election polls are not as reliable as one would think...

Thanks for the game, anyways!

Since the Spanish civilization has a powerful, unique unit, I went for conquest. The conquistador really has no counter unit until riflemen show up. And the conquistadors 50% bonus against melee units easily defeats even pikemen. Like @Kaitzilla I also went after Zara first to get the GLH to finance my wars. I never went all in whipping conquistadors and galleons, but hummed along with one war after the other: Zara, Saladin, Sury, Qin, Asoka and SB. My spies stole Communism from Qin and with State Property, the economy remained strong until the end in 1595 AD. I'm sure a more focused approach could have yielded a faster finish.

Near the end, it was almost too easy to capture cities. When you have a fleet that is large enough to remove cultural defenses in one turn plus airships to weaken top defenders, losses are minimal and the capture is fast. (Throw in a couple of cannons and you barely have odds below 99% for your conquistadors.)

I think the small map worked really well in this game. These late wars can be extremely time consuming on the higher levels (Immortal and Deity) if you have to take on an advanced AI with close to twenty cities. And I don't think the small map made the game more trivial, maybe slightly easier, but I think that's fine on the top difficulty levels.

@Count of Holland&Zeeland, in this game building the GLH and getting currency goes a long way to support your economy while expanding. Say you explore the seas and get trade routes to the AI and settle a couple of island cities, then all your trade routes will be worth at least 2 gpt. This means that any new city comes with an additional 8 gpt in trade and that can finance your early expansion. Another option is to build the Pyramids and get your research from representation specialist in the BCs, but this strategy is considered suboptimal because the specialists eat into your early growth.

EDIT: One more thing. Judging from your screenshot, you are building too much infrastructure in your cities. It depends, of course, on what victory condition you are pursuing. For a Space Victory you need more infra. Granaries are, in my opinion, the only "mandatory" building. For every other building, you must first consider the opportunity cost. And often, it makes more sense to build a settler or a military unit in order to expand and defend your empire. Of course, you often want lighthouses in your coastal cities, libraries in your best commerce or specialist cities and when maintenance bites, you may need some courthouses.
Last edited: Jan 7, 2023
You must log in or register to reply here.