similar to "Buying Used Ships" I have now implemented another feature:

This time however, it is only available with Foreign Kings. (Not your own.)

Each Foreign King may be contacted from time to time and asked for "skilled workers".
If you are not at war with his Colonies, have enough money, ... he will offer you some Experts.

Which Experts he offers and which price he asks for is calculated by a random based algorithm (with a few variables - e.g. his Attitude also influeces price).
You will always get offered Experts (Settlers or Military) of some kind, no Indentured Servant, no Slaves, no Special Units, no Ships, no ....

Basically you have to take what he offers or leave it be. Sometimes it is really worth it, sometimes not.
But most of the time (especially in midgame once hurrying immigration got expensive) he offers quite good bargains (compared to "normal buying").

Once asked, you need to wait in average 30 turns to successfully ask him again with current balancing.
Other Foreign Kings may still offer such deal though. (Each King got its own timer and own prices.)

Summary:
There is now a reason to talk to the Foreign Kings from time to time.

(Hint: The UnitType offered partially depends on how much money you have.)

It was actually little effort to implement this.
I just had the idea this morning and thought, why not.
---- 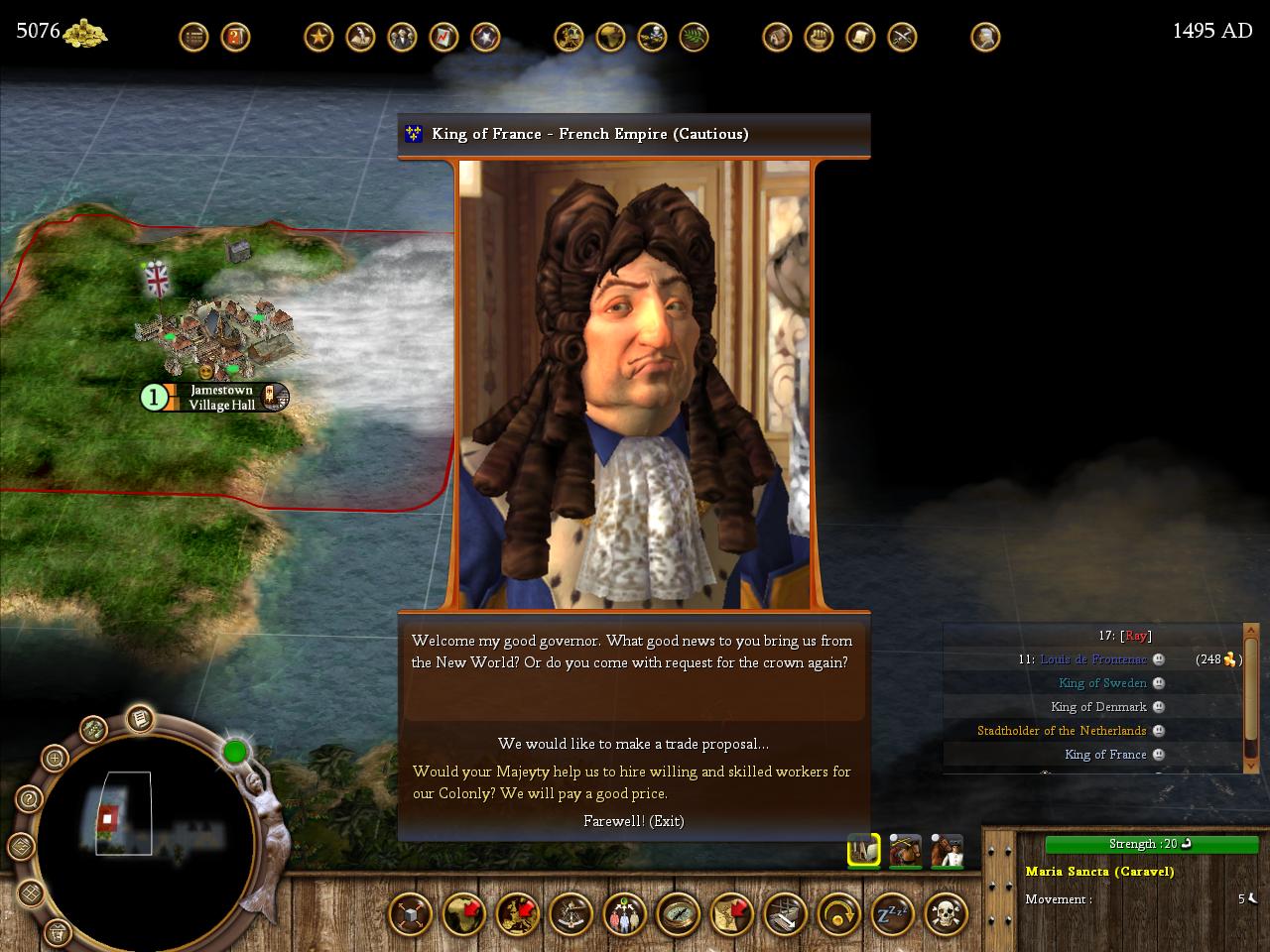 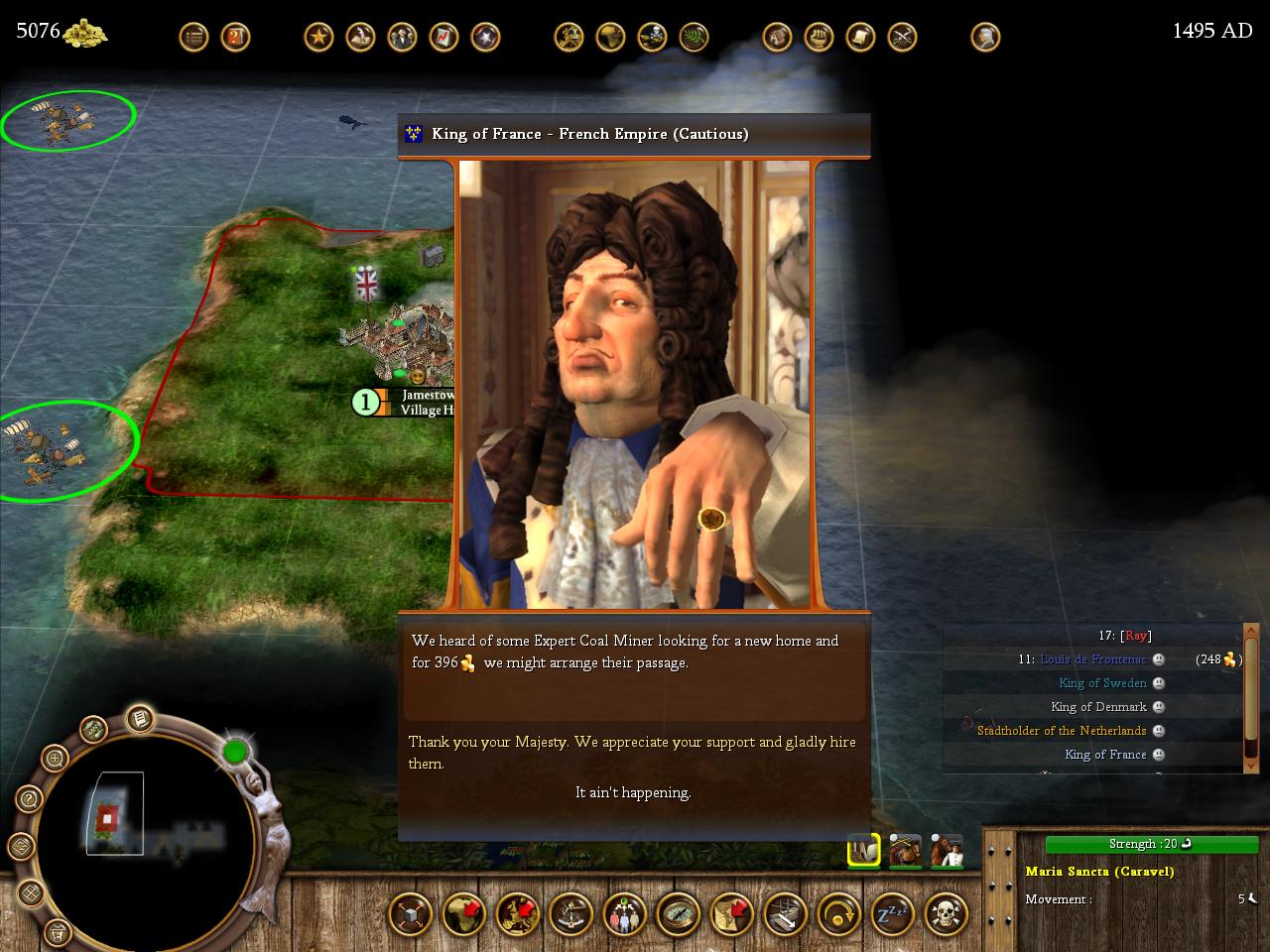 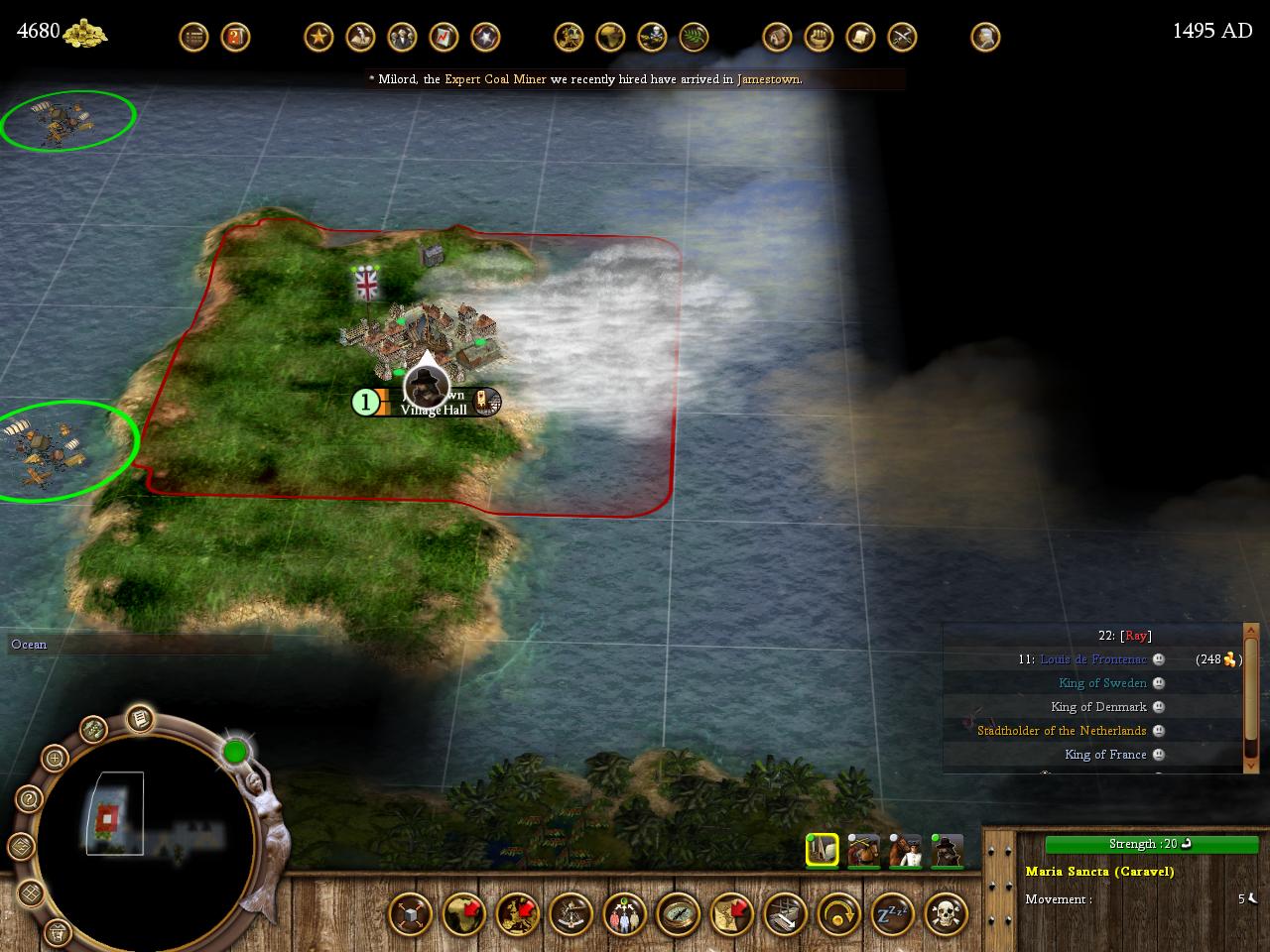 but I have a question: will the units spawn in the central colony or in the docks of europe? based on the dialogue in the screenshot, it must be some kind of colony. but I decided to clarify)

Mr. ZorG said:
but I have a question: will the units spawn in the central colony or in the docks of europe?
Click to expand...

They are spawned in your Capitol.

Explanation:
When you buy a Unit from English King (in London), why should it spawn in your own European Harbour (e.g. Amsterdam)?
It made more sense to me considering immersion to have them transported directly to the New World.

Will buying colonists affect diplomatic relation with the foreign king as well as your own king?
AfaIk relations with kings depend a lot on random events.
So if a good relation is required, it might be that a lot of players won't be able to use the feature ...

In general the foreign kings could offer specialists on their own from time to time in a random event, and if the player accepts transfer the cash into their nation's war chest and reward the player with a relation point.

Will the prices be affected by the general increase in costs when purchasing specialists in Europe using the menu?

In general it would be interesting to visit other european capitals, trade there and buy specialists from the docks. (Cross Production should affect colonists of the same religious flavour as your nation, e.g. if your nation is protestant, go to catholic France and try to hire some cheap hugenots as colonists.)
Last edited: Oct 11, 2022

historix69 said:
Will buying colonists affect diplomatic relation with the foreign king as well as your own king?
Click to expand...

No, it has no impact on the diplomatic relations to any King at all. Why should it?

It is just a business transaction basically that you pay money for and you can use only every 30 turns per King.

historix69 said:
So if a good relation is required, it might be that a lot of players won't be able to use the feature ...
Click to expand...

There are 7 other Kings in the game, so why should you not be able to use it with at least one of them.

If you cannot and have angered all other European Nations and their Kings it is simply your own fault.

historix69 said:
Will the prices be affected by the general increase in costs when purchasing specialists in Europe using the menu?
Click to expand...

Yes, when the prices in Europe rise, the prices for these specialists will also rise.

(The price is always calculated relative to what the according Unit costs currently in Europe.)

historix69 said:
In general it would be interesting to visit other european capitals,
Click to expand...

That is a different feature that somebody needs to implement.

It is not in any way related to this feature but if you want to implement it go ahead.


historix69 said:
In general the foreign kings could ...
Click to expand...

Let us please stop here. This feature is already implemented. It is done.
So there is no point in discussing any alternative implementations anymore.

The feature is completely optional.

Like it!
Retired Modder and member of the Colonization 2 "We The People" Mod Team.

Former member of the Religion and Revolution Team.
You must log in or register to reply here.

[Discussion] The "Too Much Money Problem" (aka "Late Game Boredom")
2