tiamats4esgares said:
Hey, I have a question and I hope it's ok to ask here. I've tried for the Diplomacy Victory on diety a few times with my main man Qin Shi Huang, but I can't ever get emergencies to happen even with disasters set at 4. Is there a way to make emergencies happen more?
Click to expand...

Sometimes the Civ hit by the trigger doesn't have the 30 points to put in an Aid request. Watch the alerts then sell/gift them enough to be sure they can ask for assistance.

I'm considering Cleopatra turned up to 4 for maximum disaster Aid requests; constant 1000 year floods that don't affect you at all.

Casualty of war said:
Watch the alerts then sell/gift them enough to be sure they can ask for assistance.
Click to expand...

Smart.
Loving civ since the nineties.
Join us in the HoF forums and participate in the Civ Fanatics Competition (CFC): https://forums.civfanatics.com/forums/civ6-hall-of-fame-discussion.546/
T

Casualty of war said:
Sometimes the Civ hit by the trigger doesn't have the 30 points to put in an Aid request. Watch the alerts then sell/gift them enough to be sure they can ask for assistance.

I'm considering Cleopatra turned up to 4 for maximum disaster Aid requests; constant 1000 year floods that don't affect you at all.
Click to expand...

I'm looking for disaster alerts that affect other civs?
T

attorneyatlol said:
There are other things to consider too, like if it's possible to manipulate how quickly the world proceeds through the eras.
Click to expand...

This seems to be really important to me, especially for this challenge where people are within turns of beating each other. I think somebody playing a civ that could get the world to the next era quickest would be best. This could be easily manipulated by playing a game with only 2 civs where you were both high-science civs, but I find that to be "cheating" at least in my opinion, and I always like playing with 8 total civs and all my enemies being random (I find it cheating to pick them myself, to be honest). So I wonder what civ would be best at doing this, given my own restrictions? Hmm...

I personally like playing China just to build the Mahabodhi Temple before anyone else but truth be told, it might not be hard to build it as someone else. I've simply never tried. xD

I didn't need lvl4 disasters, so it counts as standard settings too, so I posted it here: https://forums.civfanatics.com/thre...eity-diplomatic-victory.649765/#post-15771711

CLICK ME and all your problems with civ4 "Help me to beat Monarch" will be solved
civ4 imm/deity fav mod: Master of mana civ5 meh, sometimes; civ6 deity in love with Poundmaker
T

First off huge thank you to all the other competitors who posted tons of helpful strategies. Honestly I was struggling to get a diplo win under my belt at all, let alone string together a good enough run to post here!

My Run: Cleopatra in 223 Turns

After studying the runs posted here, I failed a few Canada attempts (tundra too hard). I decided to try Mansa Musa and won easily at around ~260. Afterwords I figured I'd try to go into a game without a plan and started rolling some standard deity games with a random civ.

I managed to meet three city-states right off the bat which obviously is a great start under any circumstance. But given I knew Egypt has strengths in trading and wonder production, my diplo sense was tingling.

I discovered a great city location with FOUR truffles. I've been really loving the buff to the "Goddess of the Hunt" pantheon (+1 food and +1 production from camps) and knew if I could get a city going there, it would be a powerhouse all game.

Given how strong I believed the city location was, I decided to gamble. After only building a scout and a slinger, I hard built a settler. I reasoned that the risk was likely worth the reward. I reasoned that I was close to city-states who would thin the barbs numbers and I already had one barb camp in my sites. The risk paid off, this was the only barb camp I had to deal with all game. After settling our camp city (Memphis) I opted to try for Temple of Artemis to both take advantage of the amenities and allow it to grow with all the food. After securing the build, I realized that my territory wasn't likely to be contested by the AI so I could safely execute the long-term Magnus w/ Provision + Ancestral Hall to spam settlers.

This strategy worked but with one hiccup. Russia managed to nab key territory right along my border. I was shocked he settled so far from his capitol (as you can see in the mini-map). TBH I'm not sure how his city stayed loyal, do you know?

While I tried for Apadana I couldn't get there in time.

I made sure to squeeze out an early galley to both meet other civs and ideally other city-states. I was luckily able to get them across the ocean. 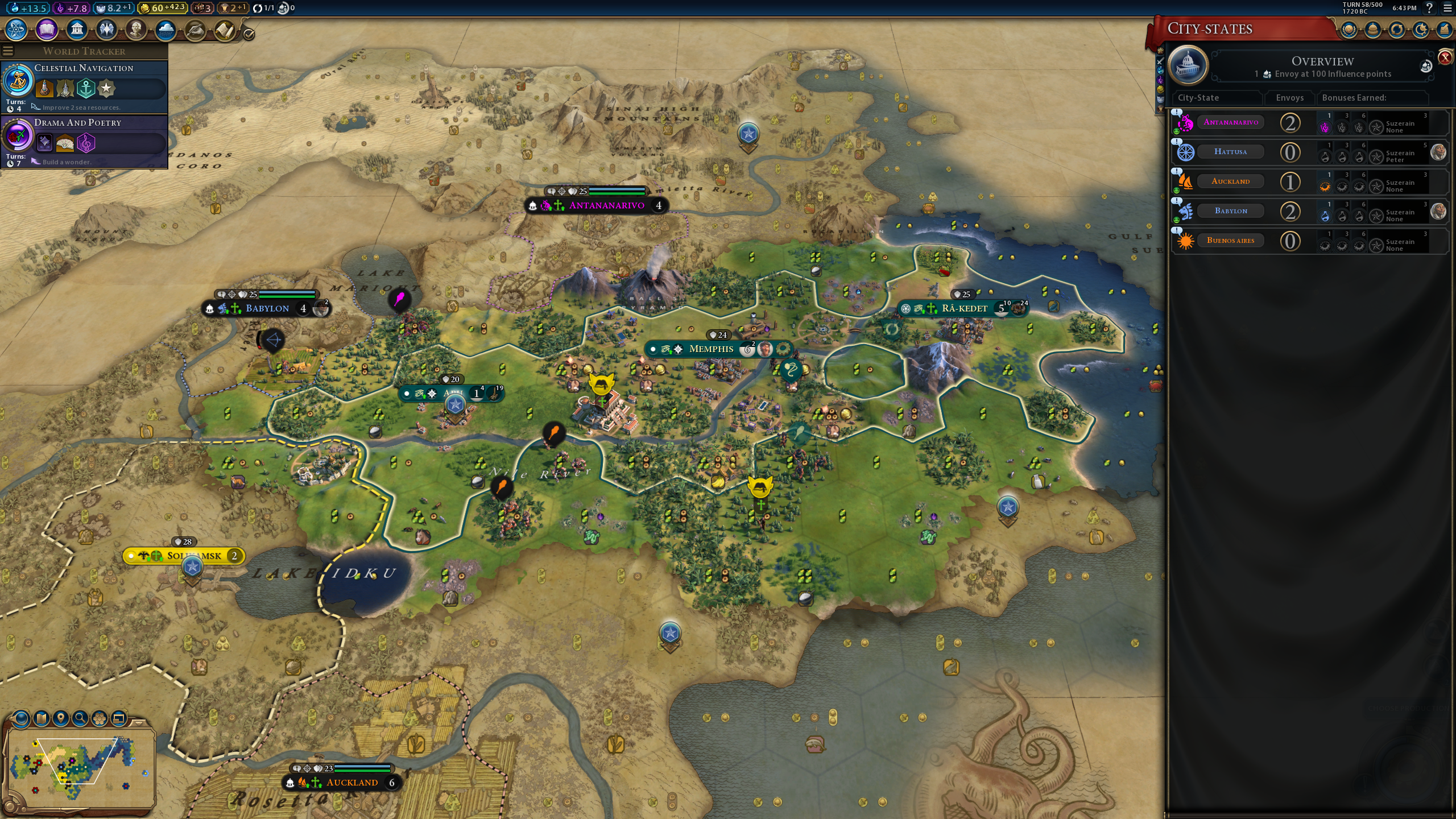 Russia made moves towards Babylon so I declared war to prevent them from falling. I had barely any units as I cut my normal build so short to rush for Memphis. Luckily I also managed to become suzerain of Auckland who managed to raze Solikamsk by themselves! So proud of them <3

Starting to get commercial hubs up. Already have a few campus including a +5 in Nekhen. Our religion is up and starting to do it's thing. Grabbing an entertainment district because of the Mexico City Suzerain bonus extending the range, hoping to sneak in a Coliseum, and luckily its a quest for Jerusalem.

Started Kilwa and noticing we have three industrial city states. Planning to add industrial centers for a nice +6 prod bonus to workshops 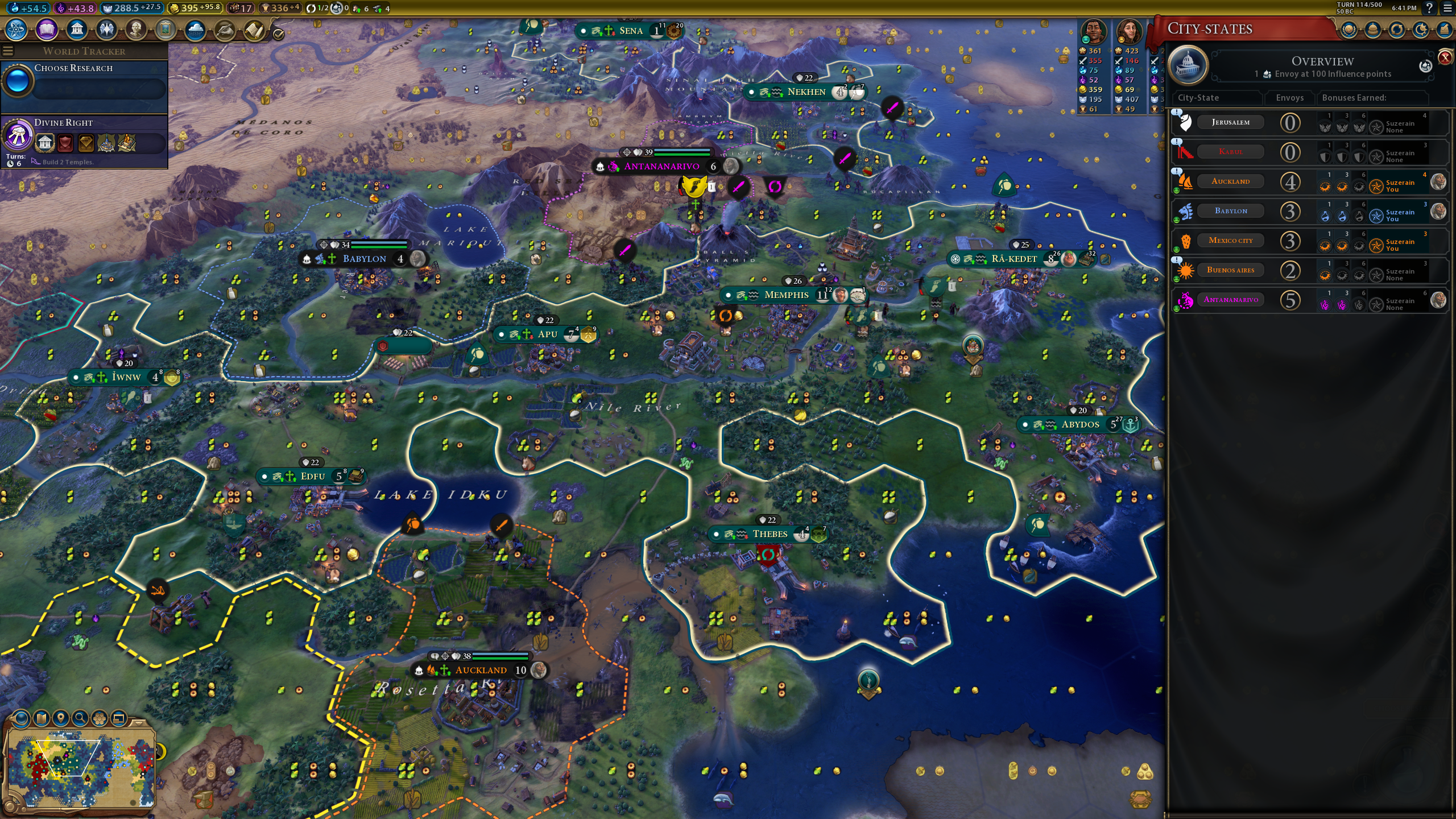 
Russia and Indonesia are going after Buenos Aires, I've moved my units here to try and block but I ended up declaring a protectorate war and recruiting Indonesia to join the fight. Managed to keep them independent and on the board.

We have three alliances up and generating DF. Our income is going great and we've started buying DF from the AI.

Luckily, Harold made a Military Aid Request putting 2 DVPs up for grabs and we are easily ahead of the competition. 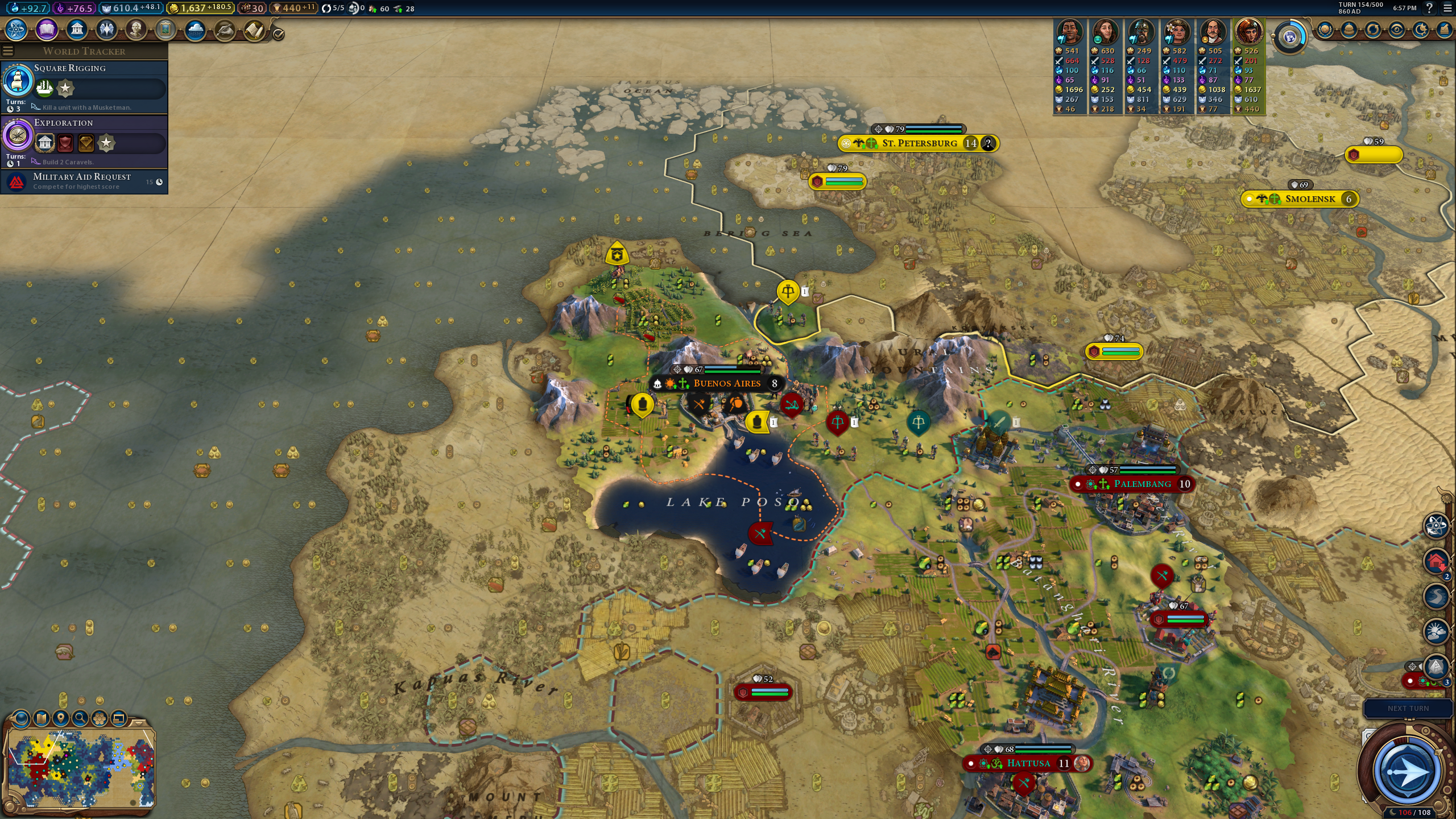 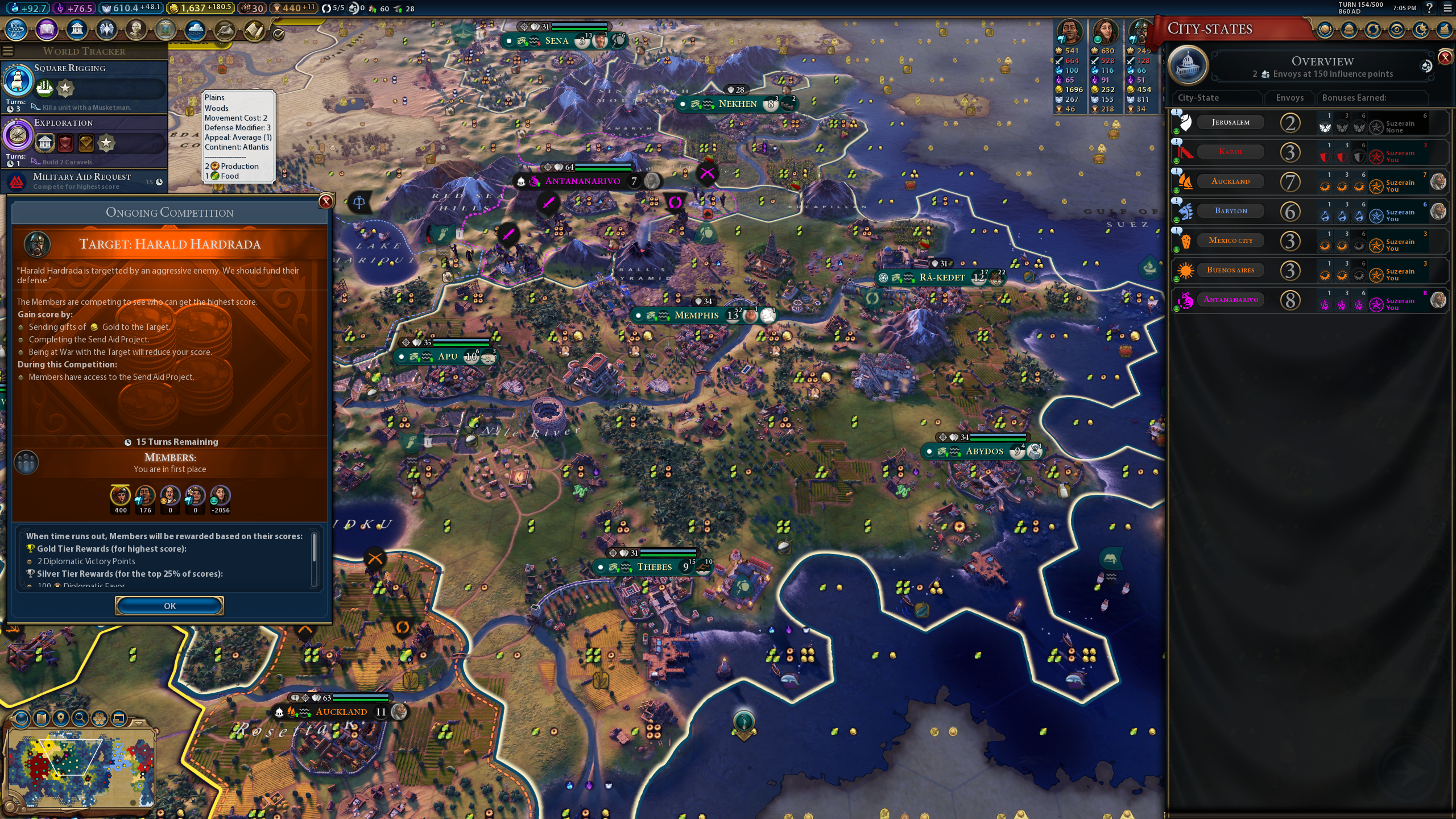 
We start the Industrial era with 9/20 DVPs needed to win. Statue of Liberty is sitting at 1-turn so we can continue buying DF from the AI without crossing the 10 DVP threshold where they cut you off.

Here's where the luck played a huge factor. Indonesia "Requests Aid" putting the points we need to close the game on the table. 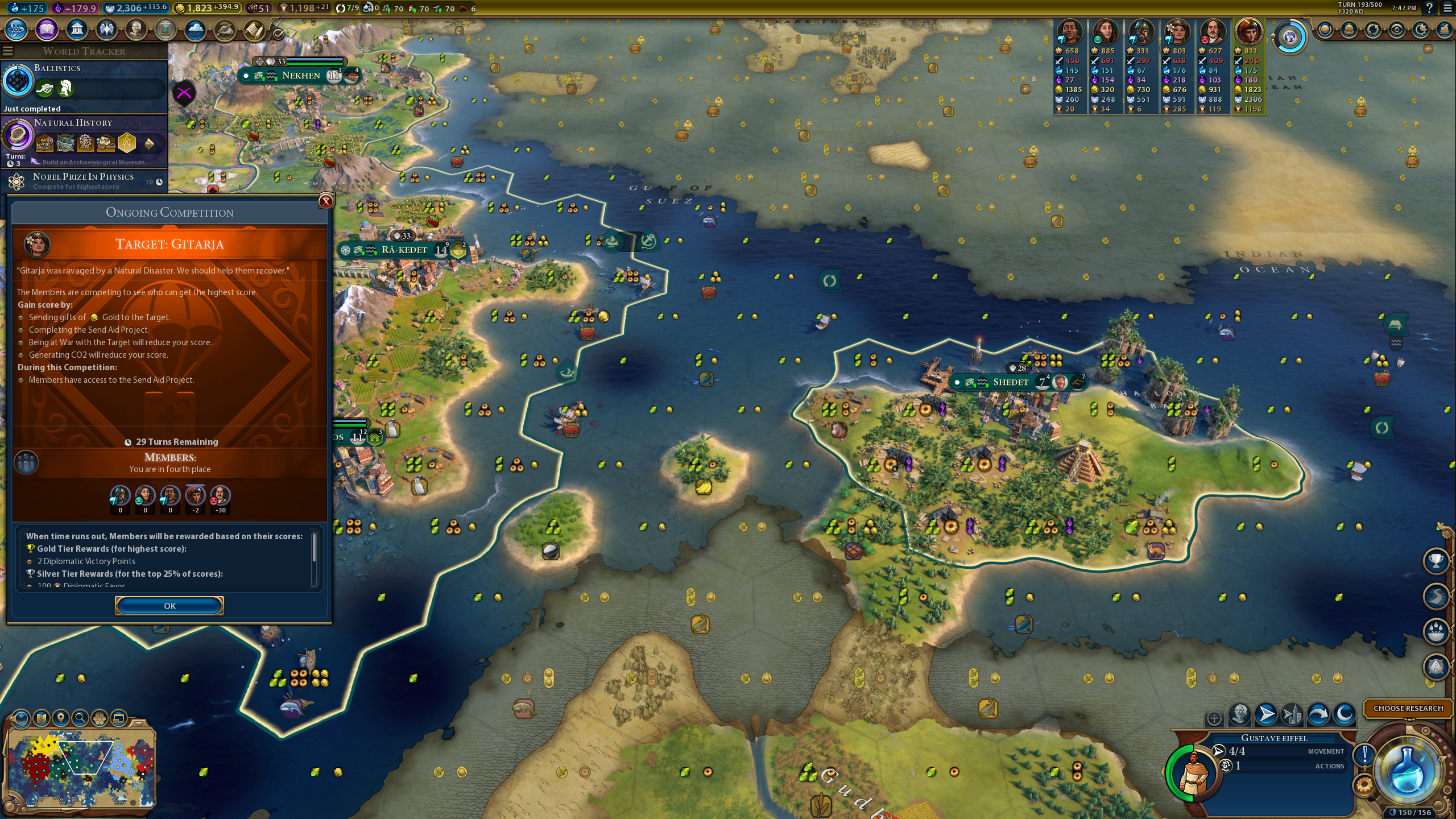 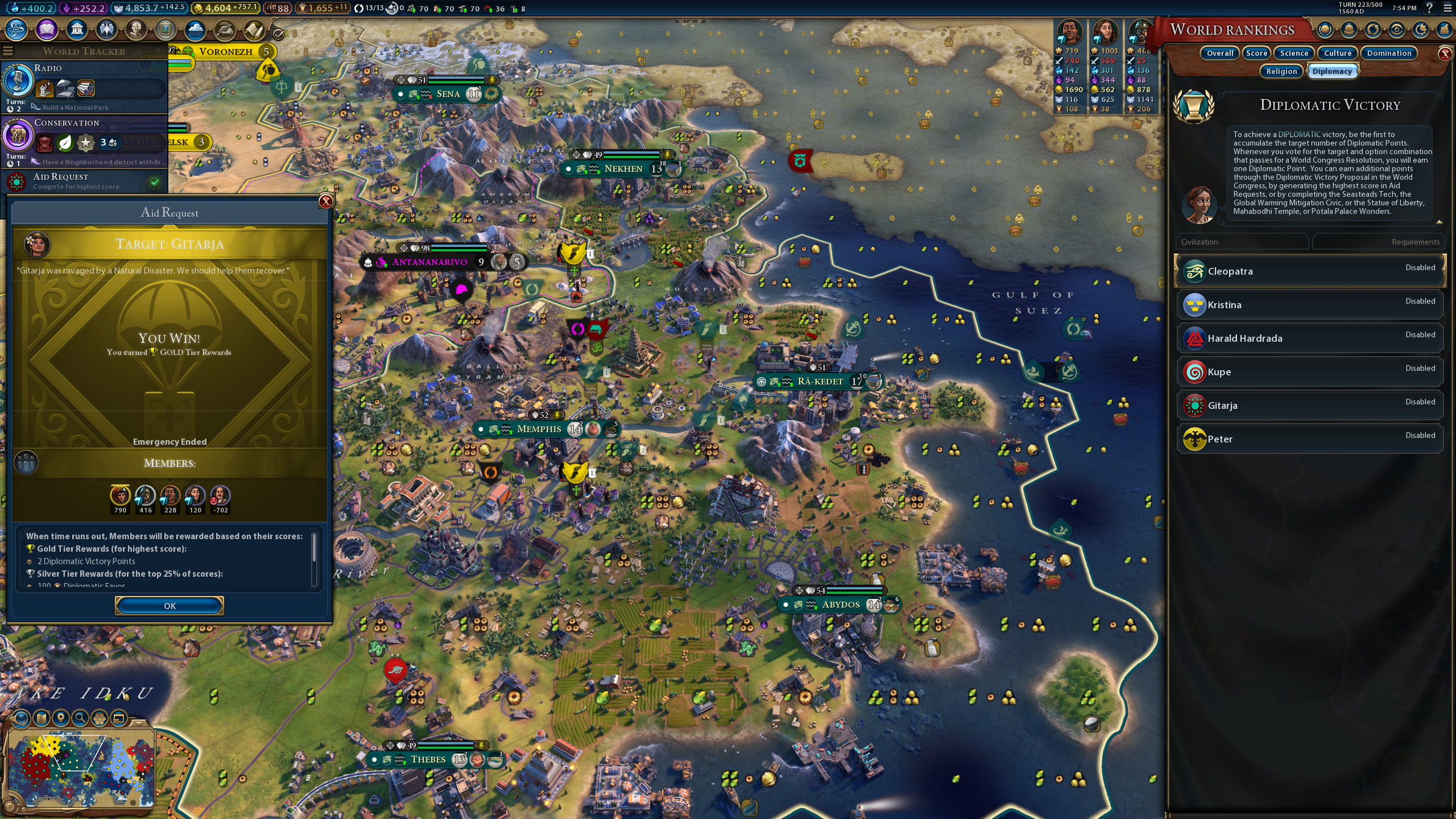 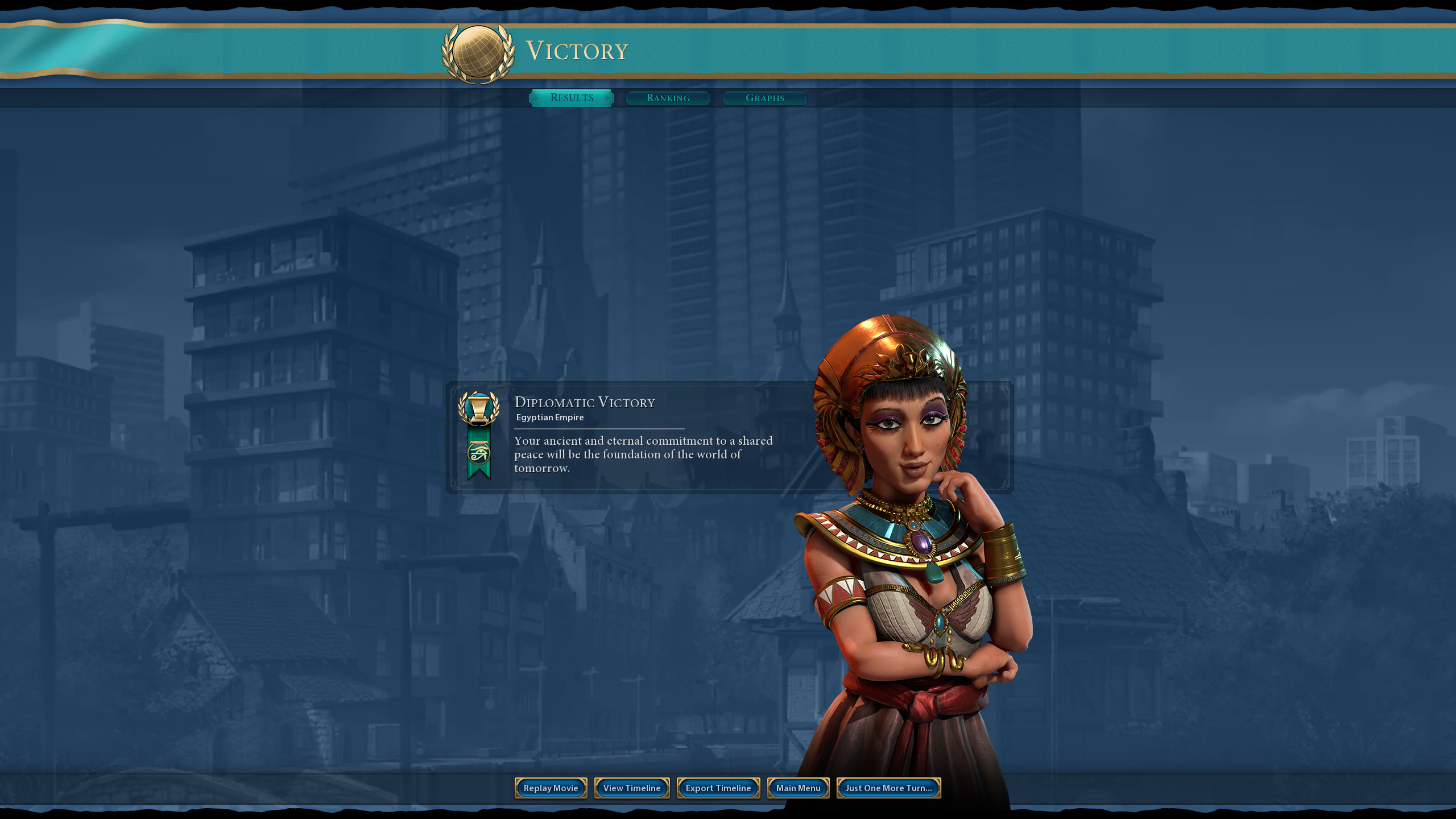 Nice game @th3crazed ! Noticed anything different for diplo victory in the new patch?
Loving civ since the nineties.
Join us in the HoF forums and participate in the Civ Fanatics Competition (CFC): https://forums.civfanatics.com/forums/civ6-hall-of-fame-discussion.546/
T

Well if you do Apocalypse mode, people ask for aid requests more often.
1

Basic strategy:
Be peaceful with everyone - having to sometimes sacrifice diplomatic favour or strategic resources to earn friendship.
Get the three main Diplomatic Point Wonders - Mahabodhi Temple (2), Potala Palace (1) and Statue of Liberty (4)
Find all players ASAP to start triggering Aid requests
Get as many Alliances and Suzerains as possible to max out diplomatic favour - prioritise city state quests.
Having a good gold income is essential for winning aid requests among other things.

I also streamed this whole game twitch. I'm not sure what the rules are for sharing but I'd be happy to share the VODs or upload the play through on youtube if anyone is interested (and is allowed here).

I'm really into winning games in as little turns as possible. I thought this would be impossible via Diplomatic Victory but it's very possible. I would have won this game 30 turns earlier but got unlucky with several World Congress votes. I ended up just shift-entering the last 30 turns just to get to the Nobel Peace Prize (One of Sweden's World Congress Competitions) to get my final diplomatic point.

I think there's definitely a method to the madness in the way the AI votes in the World Congress so I feel I'll have a better idea in which way they'll swing next time I try.

Side note: Is there a way to change your username on CivFanatics? I've had this account for years and would like to update if possible

Would be cool if you'd link your video.


100games100days said:
Side note: Is there a way to change your username on CivFanatics? I've had this account for years and would like to update if possible
Click to expand...

Loving civ since the nineties.
Join us in the HoF forums and participate in the Civ Fanatics Competition (CFC): https://forums.civfanatics.com/forums/civ6-hall-of-fame-discussion.546/
1

I've created an unlisted playlist/video series of the turn 209 victory (and anyone else interested).
Need to use this link::https://www.youtube.com/playlist?list=PLAOujmXkpAkBgJh54OE-F1rJQuL8uqJTu

I was able to change my username. I was formerly joedoe21, now 100games100days

Managed to get Mahabodi Temple, Potala Palace and Statue of Liberty for points, Orszaghaz for diplo. Played peacefully. World congress never had the "luxury resources" resolution, which is the hardest to win. Went Autocracy for most of the game, switched to Monarchy after getting Potala and started building walls.
I went with Disaster Intensity 4, so Kupe was helpfull in meeting everyone early, so as to be aware of any competition as soon as possible. The game ended up having only 3 relief competitions.
The other bonus of playing Kupe is that you get to scout for luxury and strategic resources, settle them and trade away. I also managed to stay in a continuous Golden Age after the Classical Era.
Sweden was in the game, so the final point I got from winning their first competition.

I'm sure that with a little luck a sub-200 victory is possible, but somehow luck only strikes when you're not hoping for it. 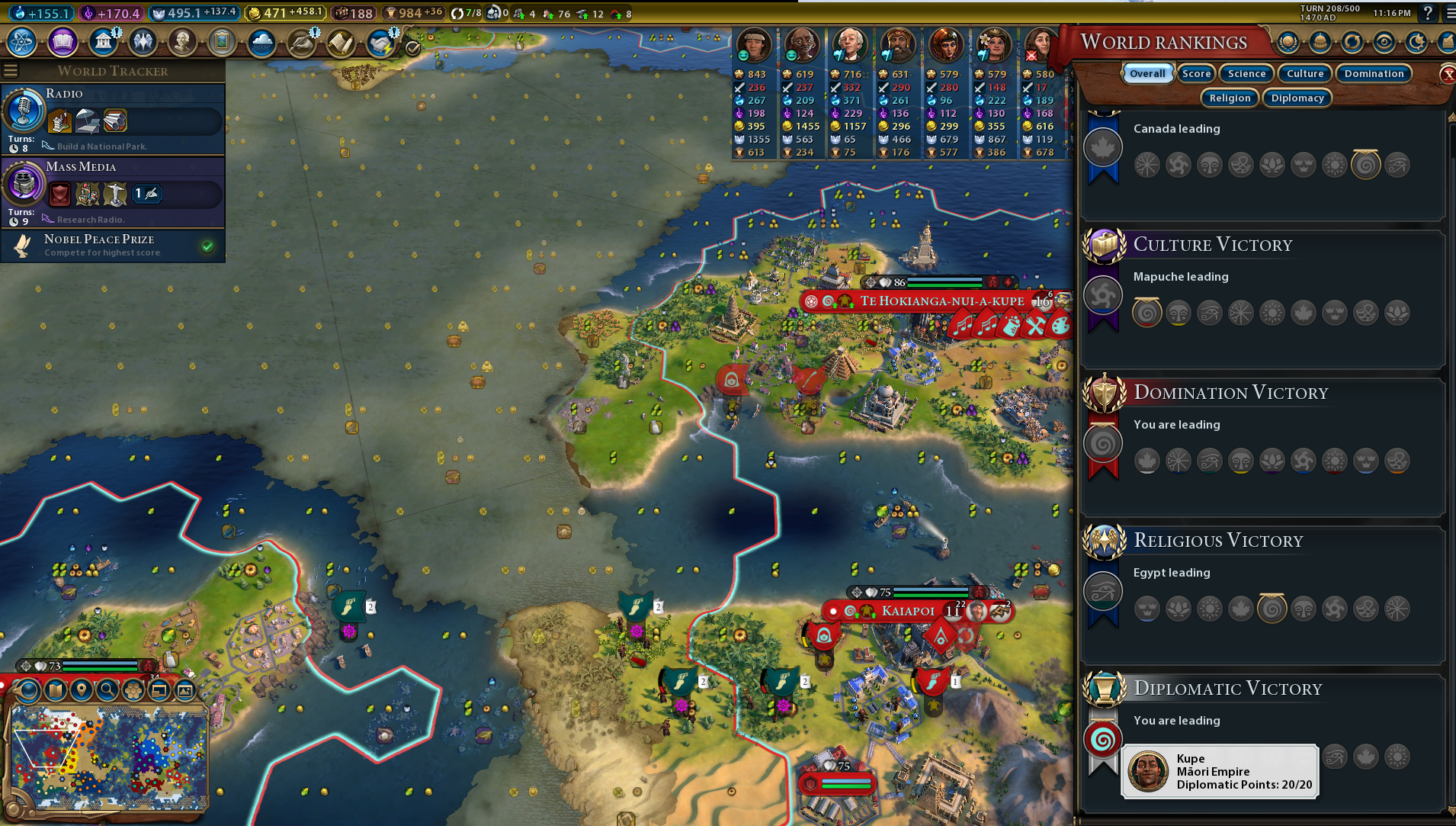 
Got the wonders, Won 4 Aid Request emergencies. Lost about 4 World Congress resolutions but won all the other ones, otherwise it could have been a really early victory. 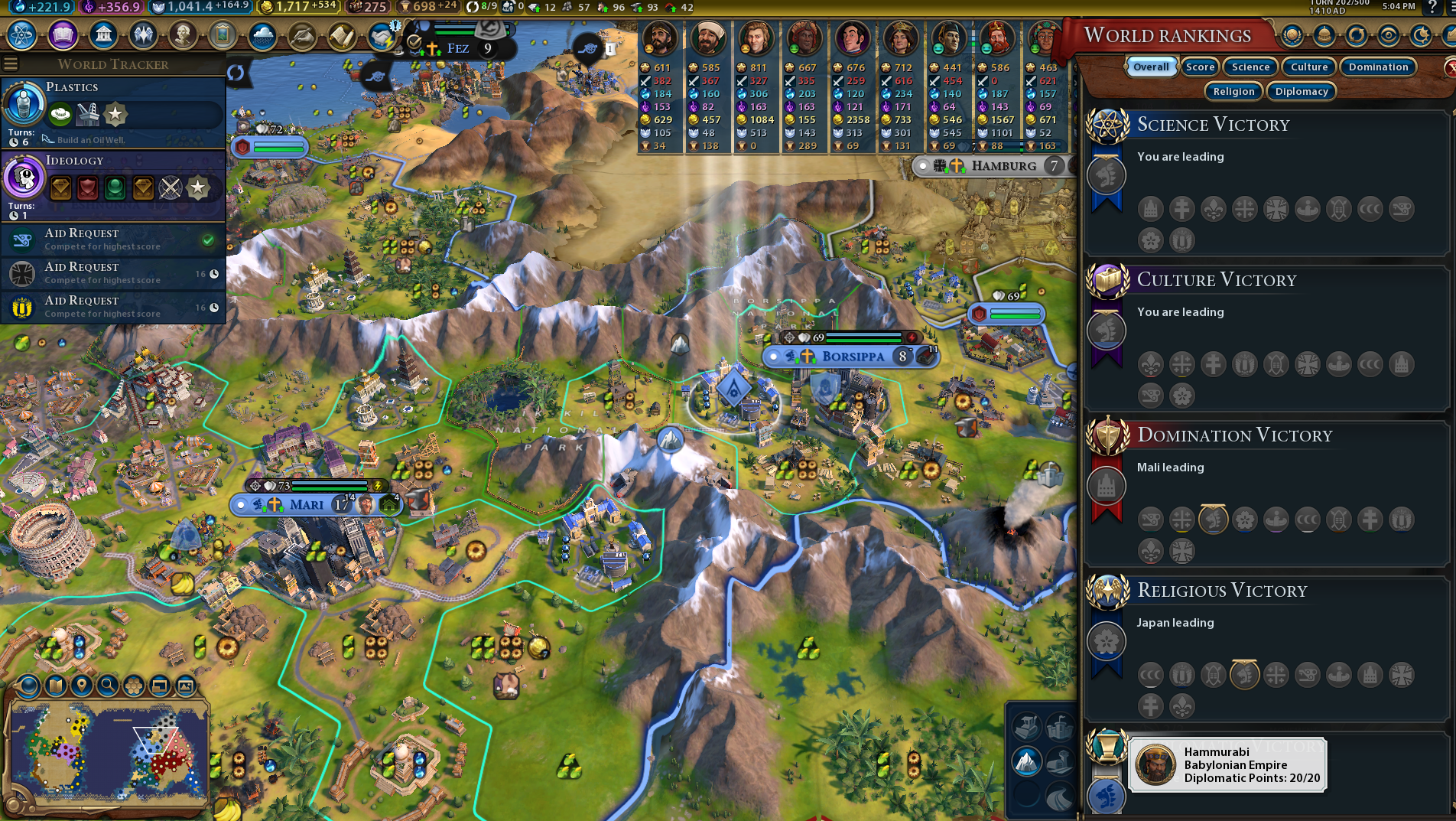 Went random with the leader and got Kupe. Couldn't get Mahabodi, but got Potala and Statue, won all the emergencies and only lost 2 World Congress resolutions. 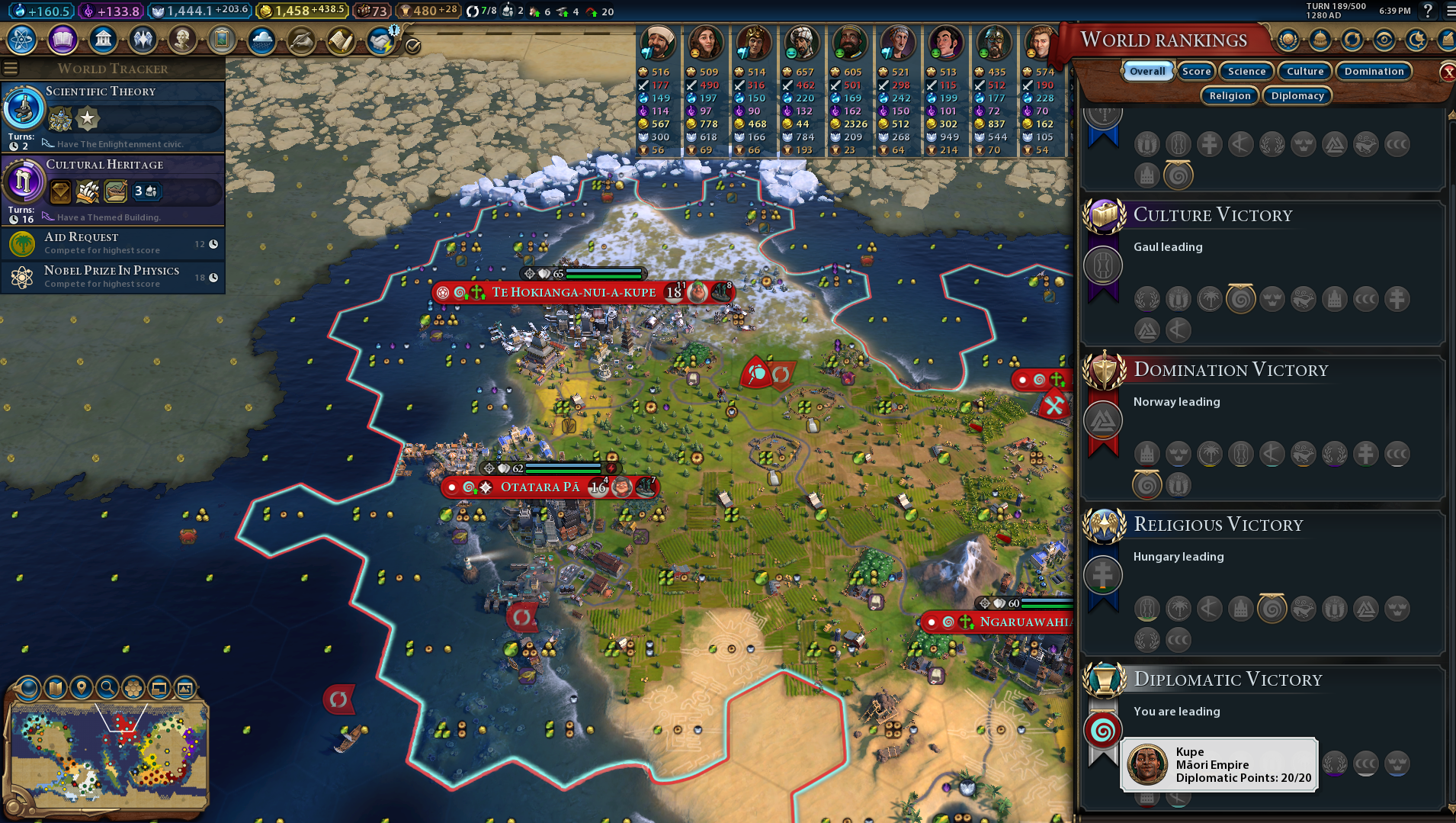 Wednesday at 11:20 AM
Noble Zarkon