Welcome to the Civ Fanatics Competition (CFC) where we will find out who can pull off the fastest deity domination victory on a game with ALL STANDARD SETTINGS!


To participate, start and play a game that matches the following conditions:


To make sure it’s a fair competition, make sure to:

Participate in the contest

To be eligible for a ‘top position’, post a reply to this thread where you:

Copy and paste, and enter yourself into the top 10 list if your score is worthy!


Have fun!
Last edited: Nov 28, 2019
Loving civ since the nineties.
Join us in the HoF forums and participate in the Civ Fanatics Competition (CFC): https://forums.civfanatics.com/forums/civ6-hall-of-fame-discussion.546/
C

Turn 149 Domination Victory. I think a better player than I am could have gotten this done 20 turns sooner, so I've included some intermediary saves. My best time since the September Patch for Domination.

There were some aspects that favored a fast win and some that almost made me discard it. I did find an early Relic, which led to Religious Settlements without even needing to slot God-King. I had quite a bit of room for expansion, both good and bad because I had to hard-research Political Philosophy and there was tons of room for Barbs to spawn. Lots of Horses meant that the Barbs were often mounted, and my capitol actually got pillaged pretty thoroughly by a horde. The other civs had weird priorities this game, so I actually got Sun Tzu and Hypatia

My two nearest neighbors decided to fight amongst themselves rather than harass me, which let me clean up two weakened and depleted civs by turn 73. I could have probably pursued any victory condition for a sub-200 Turn game after I absorbed Kongo and Phoenicia.

I did build a small army, which got annihilated approaching Meroe from the Southwest; that capital was a deathtrap with many chokepoints and blocking cities. Most of the work by far was done with Levied forces, much cheaper to upgrade, Raven King-boosted and as fast as light cavalry. 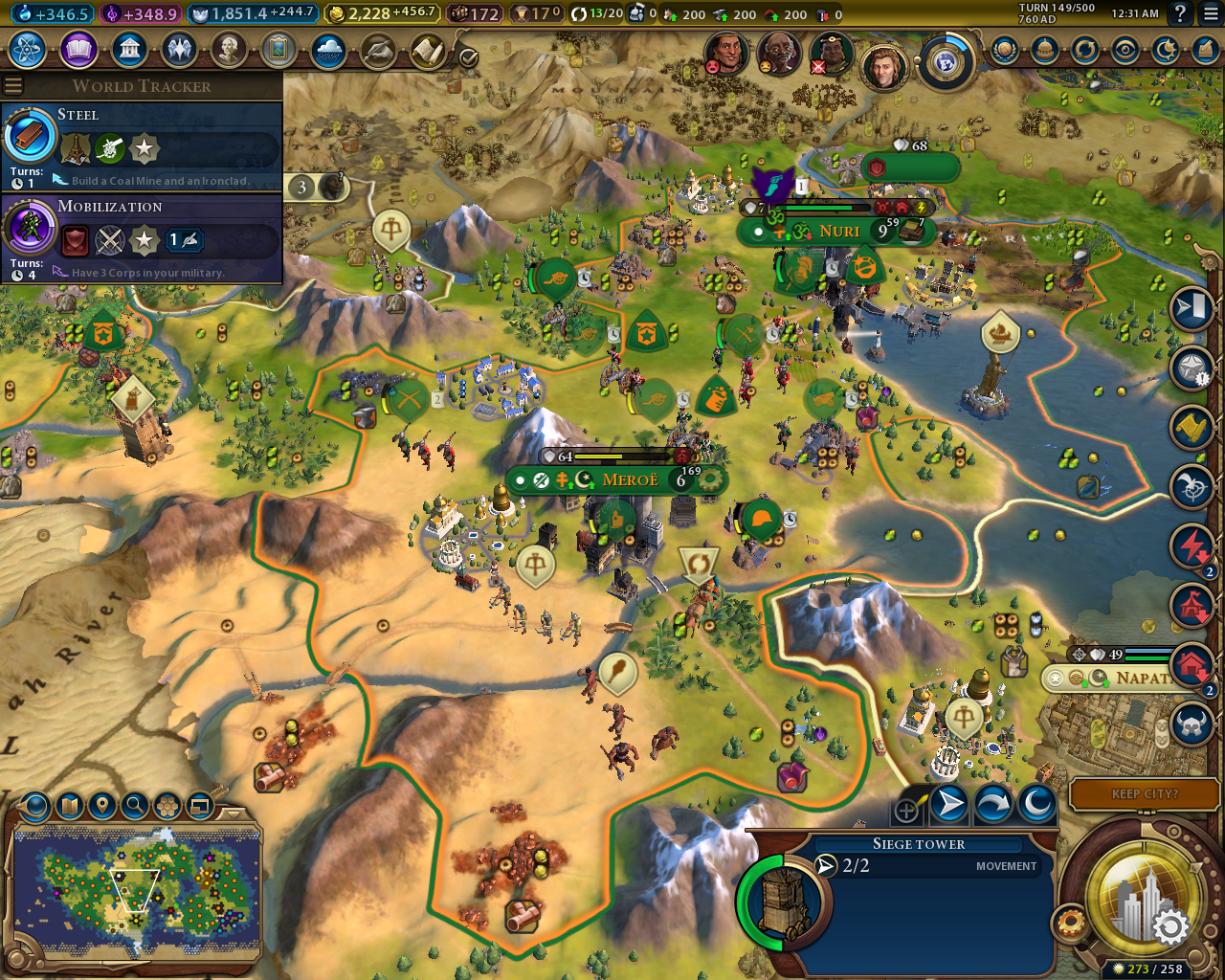 Congrats @Casualty of war for a great domination victory! Matthias is my favourite dom civ, I just love steamrolling the planet.

Thanks for kicking of this competition, I'm wondering who can/will beat you turn time!

***
Loving civ since the nineties.
Join us in the HoF forums and participate in the Civ Fanatics Competition (CFC): https://forums.civfanatics.com/forums/civ6-hall-of-fame-discussion.546/
C

No turn 1 save. I did a big Save purge and accidentally kept the wrong Matthias Turn 1.

No biggie if it's not "official." Just trying to prompt some others to start participating.

A first turn save can always be re-created using the right settings and the game seed, so for me this one's official.

Loving civ since the nineties.
Join us in the HoF forums and participate in the Civ Fanatics Competition (CFC): https://forums.civfanatics.com/forums/civ6-hall-of-fame-discussion.546/ 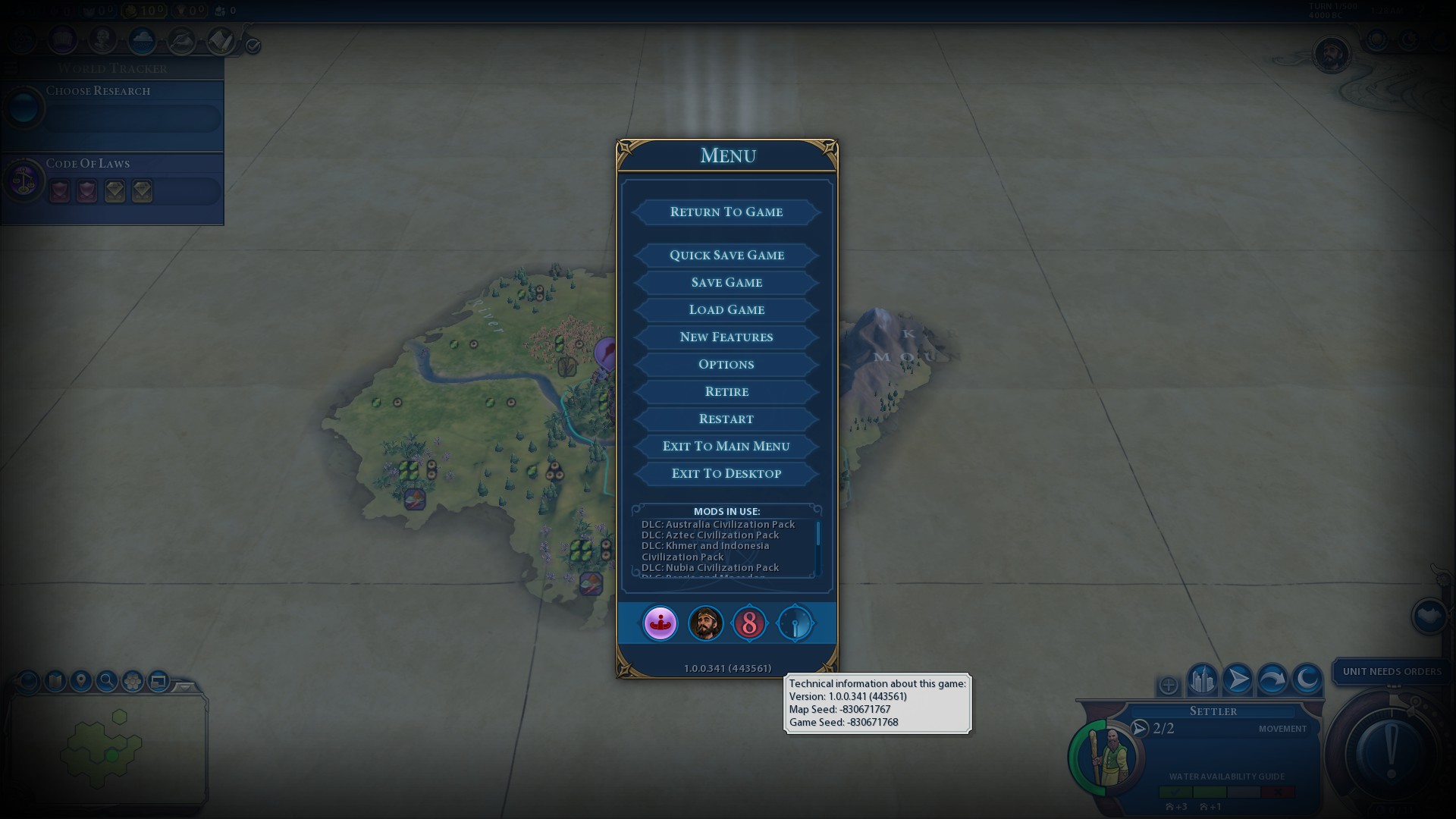 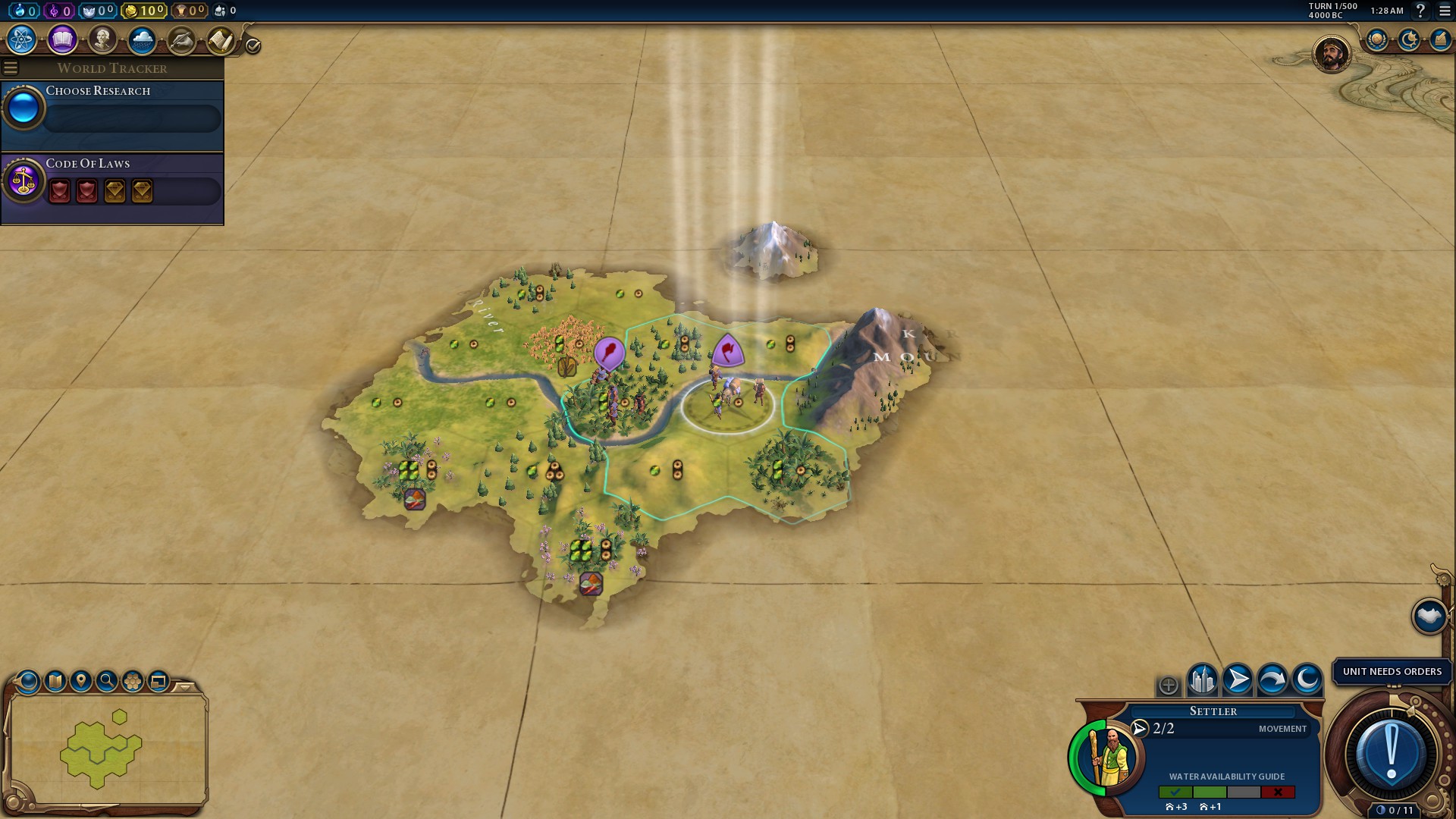 My strategy was to combine the strength of Immortal (and Musketmen) with the gain of +2 Movement from Surprise Wars. For most of this game this worked well. With a great start, I was ready to start the first war against Dido at T57. By T73 the war was over. Incredibly, Dido offered me two Settlers and a Worker 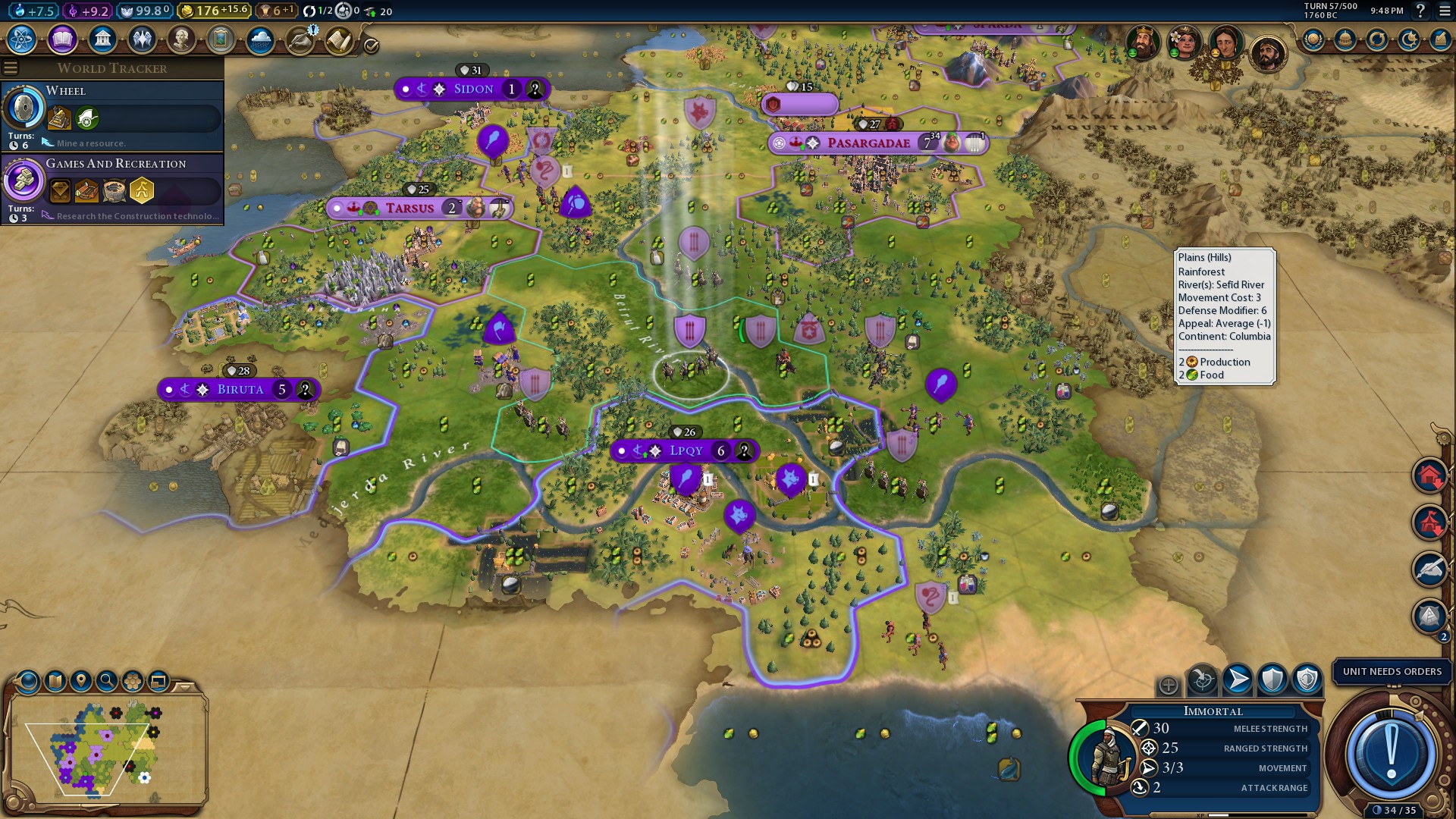 Four things went wrong and delayed the game by at least 20/30 turns. But as I am a casual player, I can't wait for the perfect game and the main idea right now is to participate and foster the list ...

Between my lands and the Scottish lands were several mountains and two city-states. The best route would be north surrounding Granada. So it would be five cities until it reached Stirling Capital. After the war with Dido, I was preparing my units for the big journey and the surprise came: Robert declared war on me at T74. No, there was no Army to fight, but I lost one of my main weapons: +2 Movement with Surprise War. There was nothing to do but keep going. Stirling was conquered at T110. Another detail here is that when I reached Stirling, I had Immortals and a couple of Knights. Since this city was surrounded by three mines and defended by several Crossbowmen and walled, my units were not strong enough for the invasion and would be a suicide. So I had to back off and wait for the Musketmen upgrade. So much turns lost in this march

. In fact, if I had declared my Surprise War as expected, my Army would be around Stirling faster, and things could have been different.

After conquering the Scottish Capital, my Army was again in the south, and a large and vast mountain-chain separated our new lands from the Cree lands. Near, we only had one tile between the mountains for the invasion and going around the north was not an option. There was no resistance or casualties of war, but crossing an entire Army by just one tile, one unit at a time was a nightmare

. Again, some more precious turns were delayed. At least we had our +2 Movements again 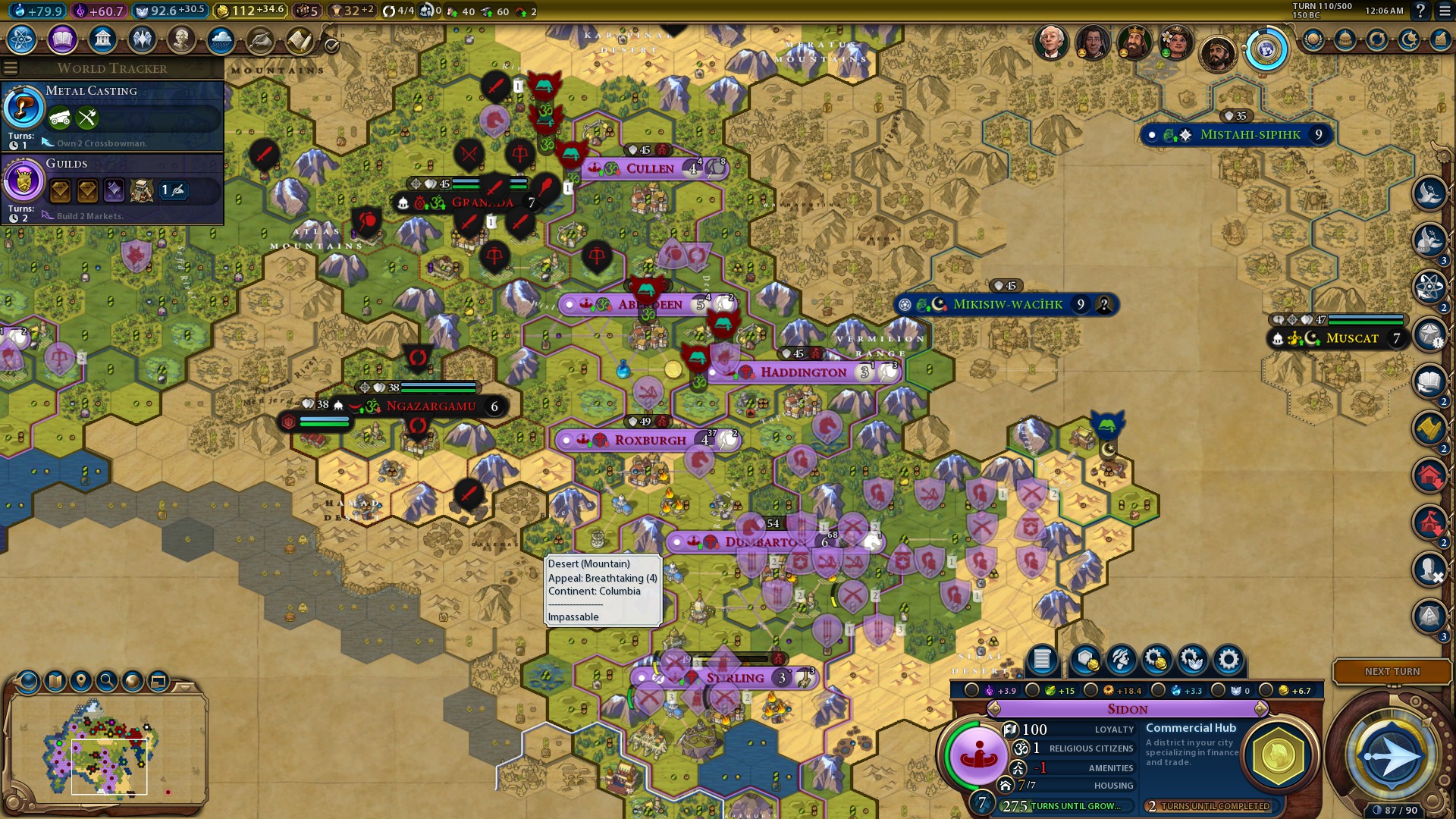 After the Cree Civilization, Guitarja was not a problem. Everything went as planned: Surprise War and a few turns conquering three cities, including the Capital. Finally, my Scout found the other side of the continent. So far, I didn't know two of the last three Civs. But these three were on another continent separated by coastal tiles. Not exactly a problem, because there was no need to find Cartograph, but a barbarian Caravel right in the middle was... And I didn't even have a ship whatsoever. So my fastest units have to wait near the coast for some turns till a nearby Bombard arrives. My Scout had to commit suicide in order for Barb Caravel to be and stay in range. Again, a few more lost turns are added

For all the situations above: On the one hand we get upset because this is CFC and we can't waste any time (or turn). But on the other hand surprises (the good and bad ones) are precisely the challenge that make we have fun playing the game. So it's all right

#4 - The most defended city and my messed up

Once inside the second continent, the other two unknown Civs were discovered: Brazil and Dutch. My units that arrive first made an area recognition with opened borders and quickly studied the three Capitals. Pedro II and Wilhelmina, both fell easily and only the Capitals (sorry, it was not an intention, but had to raze another from Brazil just to pass my troops). My giant confusion was with my choice of Canada, when I discovered (during the game) that I could not declare a Surprise War against Canadian Wilfrid Laurier

. Wow, bad and worst choice for my strategy. His Capital was well defended and his Army was the strongest in the game (apart mine). I had to declare Formal War. Although he could not defend the power of my troops, I lost precious turns infiltrating my units, especially Bombards. With some resistance, Ottawa was also conquered. Here's another detail: I'd have enough time to maintain Brazil's Capital until I conquered the last Capital Ottawa, so no concern about that. But I soon realized that without Surprise War, it wouldn't be that easy, and soon I sent some units back to Rio de Janeiro, which became a Free City. At the same turn I was conquering Ottawa, I was recovering Rio 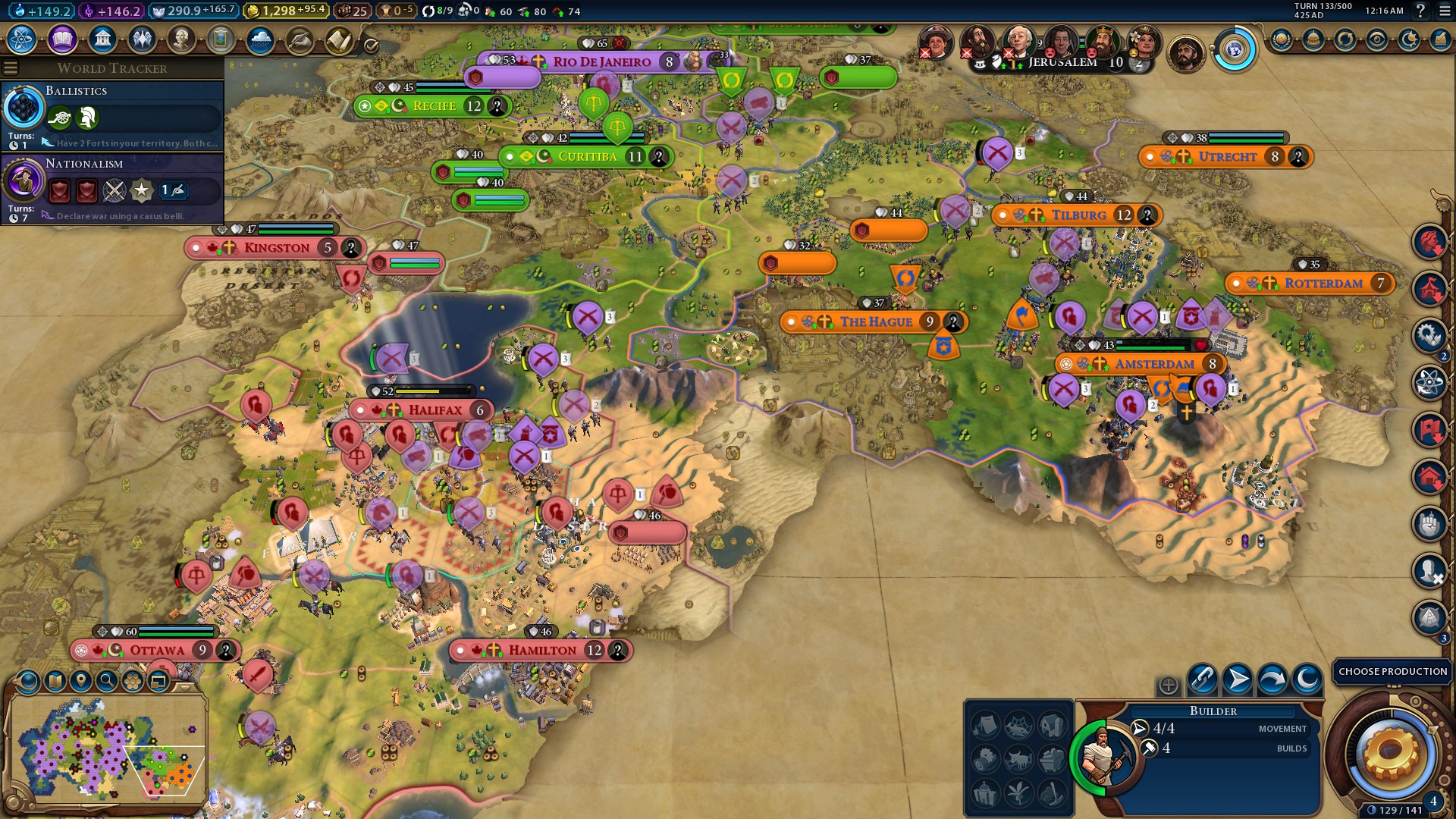 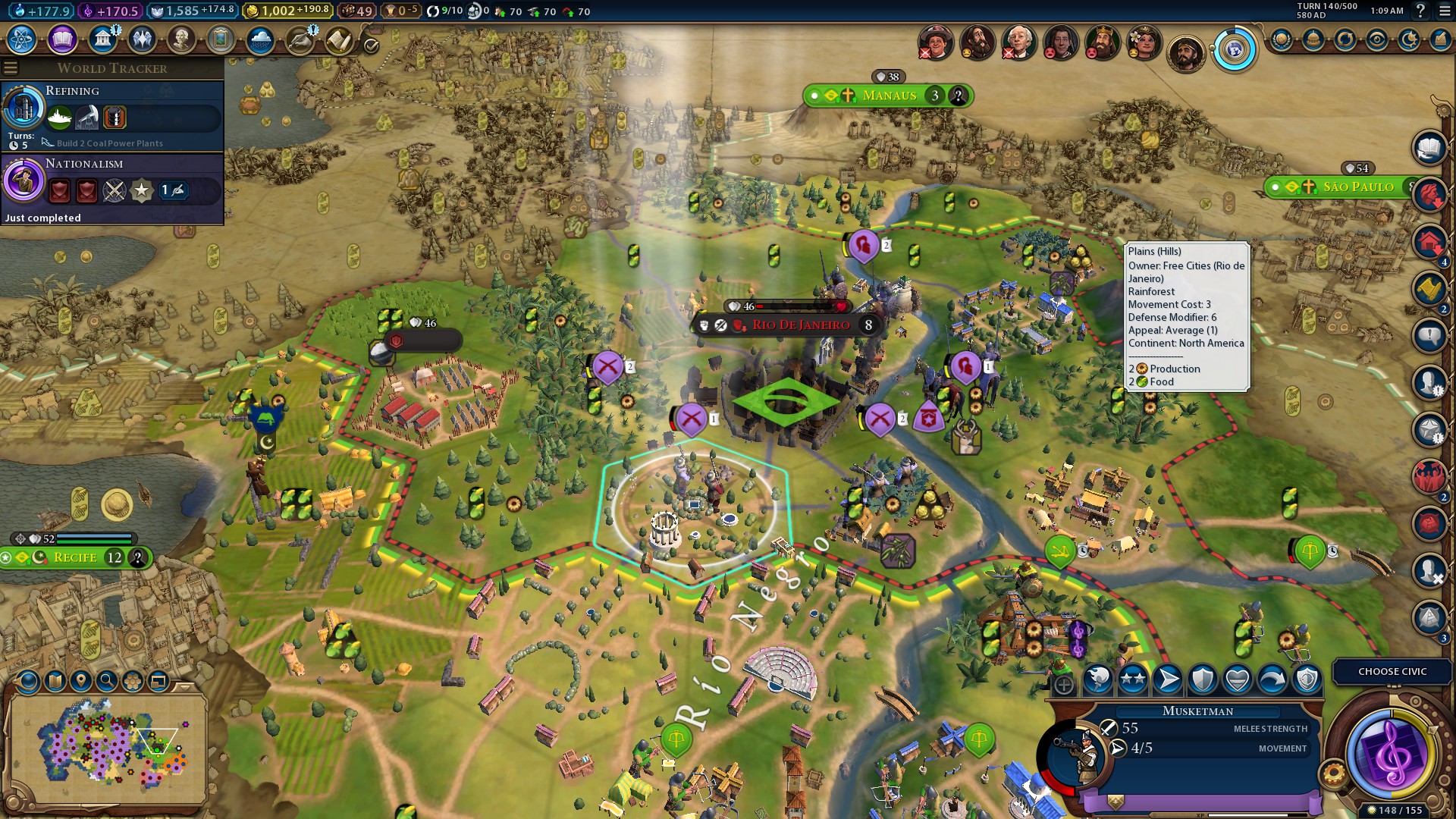 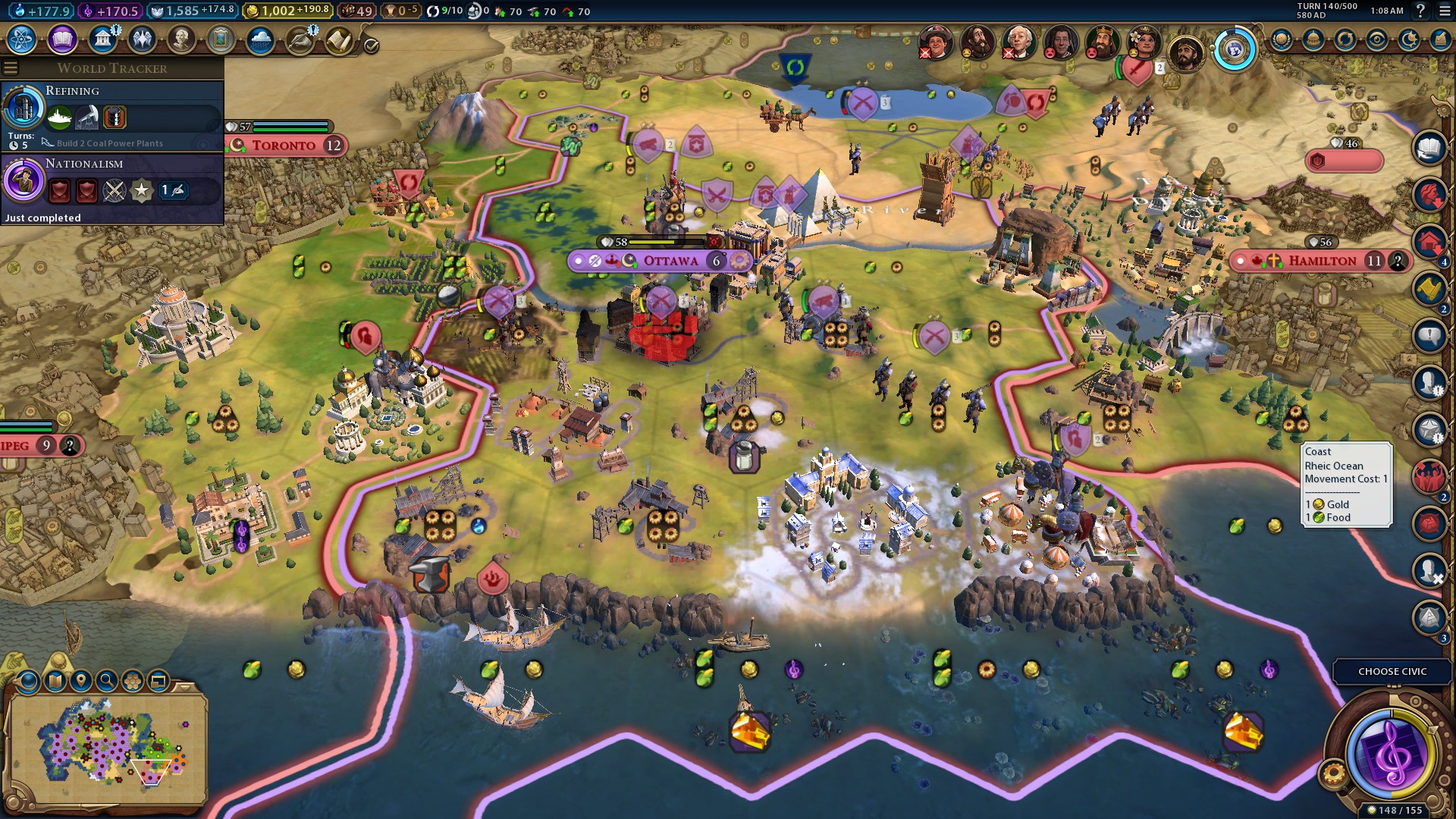 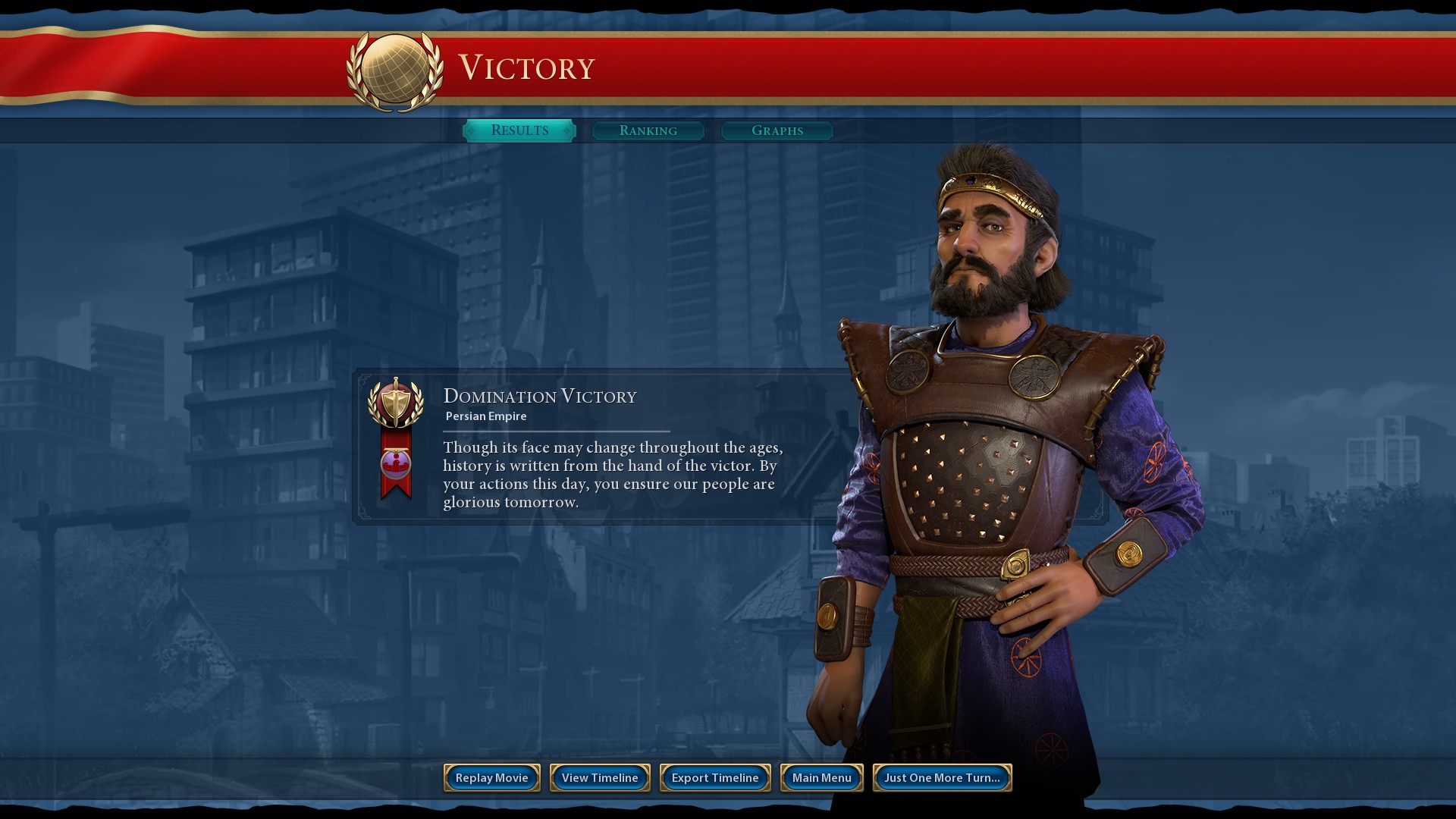 Congrats Bangau for the excellent initiative! As I said, I'm a casual player and medium Deity level, so my mistakes are quite common. But I'm happy to be able to collaborate and participate. Hope this game can attract more players to increase the list

Settings: all per above; unique items below
Leader: Kupe / Maori
Map: Terra; kept regenerating map until I got one where I discovered the Terra portion of the map first; really wanted one with a science boost wonder, but didn’t want to keep generating for one
Game seed: 1837930798 Map: +1

Religion
T13 - Pantheon: Religious Settlements (thanks to Armagh & Relic)
T63 – Religion: Reliquaries & Crusades (only use was Mali capital that was held by Macedonia)

Trading: Whenever I could trade I would, to include trading away a relic early for good gold. Tried to do joint wars as much as possible, but later I was getting denounced on the turn after I met AI, so traded all I could on the turn I met them.
Science: beeline Construction + Bronze Working (Encampment) + Wheel (Eureka) [didn’t need wheel as I captured a water mill from Inca]
Culture: to Pol Phil + MT + Mys, then mainly upper
Policies: Oligarchy; Military construction (Agoge + UP) and Strategos (Great Generals)
Exploration: Found city spots for 2nd & 3rd cities, then sent 2 warriors to find the City State portion of the map. I was hoping for Akkad + lots of science, but only one science and no Akkad (hence the battering rams). I didn’t explore too early on the Terra side as I lost a warrior to barbarian ships and figured I wanted to be able to trade vs all denouncing me early.