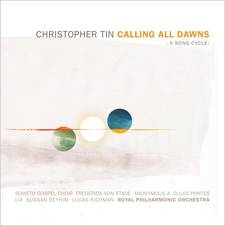 Christopher's debut album Calling All Dawns is the winner in the Best Classical Crossover Album category.

Baba Yetu is the winner in the Best Instrumental Arrangement Accompanying Vocalists category.

Congratulations to Christopher on the wins! It's well deserved!!!

Congrats, Christopher! Baba yetu has got to be one of the best and most memorable songs ever. It makes Civ 4 the outstanding game it is in all aspects. Yea!

All the other songs are amazing as well. I even prefer Mado Kara Mieru to Baba Yetu. Christopher Tin is unbelievably talented and completely deserves this.
B

He definitely deserves it.

.
I just left a message in his guestbook about that CFC congratulates him to the prices.
Btw, you can look the nomines and winners up here.
Civ4-BtS-Mod "Mars, Now!"​
BtS: 18 Civs on a world map - and your choice, which!

It is a great song.
Kaitzilla vs. The World
The Largest Civ 4 Deity playthrough in history!​

Location
Somewhere over the rainbow . . .

These songs (and Christopher Tin's talent) definitely deserved the awards!

UAU... i love this song so much! Excellent song!

Everybody loved Baba Yetu. I don't understand why they didn't just bring it back for Civ 5 and made it the official theme song for Civilization. At the very least they should have brought back Christopher Tin for a new song.

Nice to know something other then top 40 dance-pop can win awards.
In most cases, we only learn, after having straightened out the inverted syntax and deciphered the intricate metaphors, that some great ruler, attended by brave warriors, defeated his enemies at such-and-such a place, thus making the life of the local corpse-eating wolves and ravens a little happier. - Lars Lonnroth, on contemporary descriptions of early medieval battles
B

Wow ... I have a whole new found respect for the Grammy awards.

Location
Somewhere over the rainbow . . .

Ajidica said:
Nice to know something other then top 40 dance-pop can win awards.
Click to expand...

Congrats on Christopher Tin for his win!!!! LOL it rhymes....

I love Baba Yetu. It beats Justin Bieber ANY day.

This is excellent news! I always enjoy seeing a deserving title to end up winning the prize.

It is my ringtone

Hero of the Soviet Union

One of my favorite pieces of music! Congrats!

Ajidica said:
Nice to know something other then top 40 dance-pop can win awards.
Click to expand...

Old World's Soundtrack nominated for a grammy, and another additional nomination for Christopher Tin

Petition for Christopher Tin and/or Geoff Knorr to appear as Great Musicians in Civ 7.