Again reinventing the wheel, but this time from the decompilation perspective.

Does somebody has a list of all playing levels (per government) regarding to hapiness? To explain more what I am looking for I give just an example (it's probably wrong): Deity with depotism government: 4 size one cities without unhappy people (red hats) Deity with monarchy government: 7...
forums.civfanatics.com

I was playing on the scenario east-wind-rain today as china and noticed that in one of my size 2 cities I had a unhappy person and a lack person. Who are these black people and what do they do?
forums.civfanatics.com

Information about the mood in the city is represented by three values.
H – number of Happy Citizens. Teal color.
U – number of Unhappy Citizens (includes Angry Citizens). Red color.
A – number of Angry Citizens (or Very Unhappy). Is included in Unhappy, so it is how much of Unhappy are additionally unhappy. Black color.
The happiness calculation consists of 5 phases. After each phase, values H, U, A are normalized and recorded in array of phases for later use. The normalization procedure will be described at the end.

CRF – Cosmic constant “Riot factor based on # cities (higher factor lessens the effect)” defined in RULES.TXT. Default 14.
CSFU – Cosmic constant “City size for first unhappiness at Chieftain level” defined in RULES.TXT. Default 7.
DL – Difficulty Level (0 – Chieftain … 5 – Deity).
So (CSFU - DL) represents city size for first unhappiness at current Difficulty Level.
Note. If (CSFU - DL) is lower than 2 (which is not the case with default values) then if this is the capital and there is no attacking units causing unhappiness and no attacking units in city, then (CSFU - DL) is equal to 2. Again, this rule can be completely ignored with the default cosmic values.
S – City Size.
BU – Base Unhappiness, caused just by the City Size.
BU = S - 1 - ((CSFU – DL) - 2) 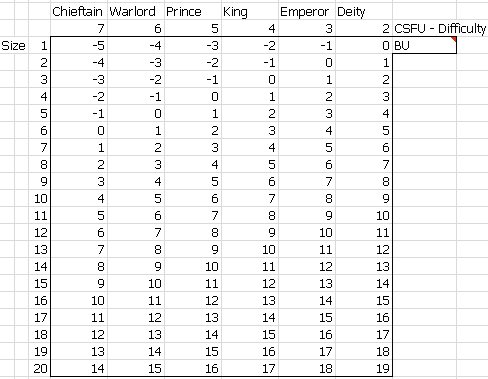 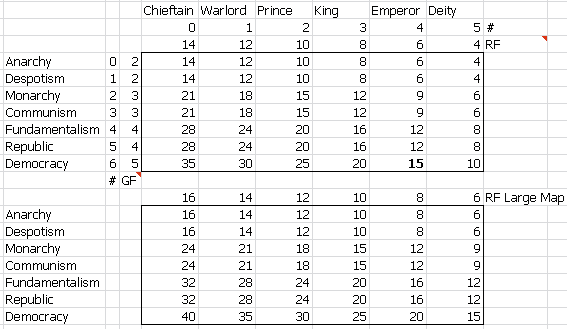 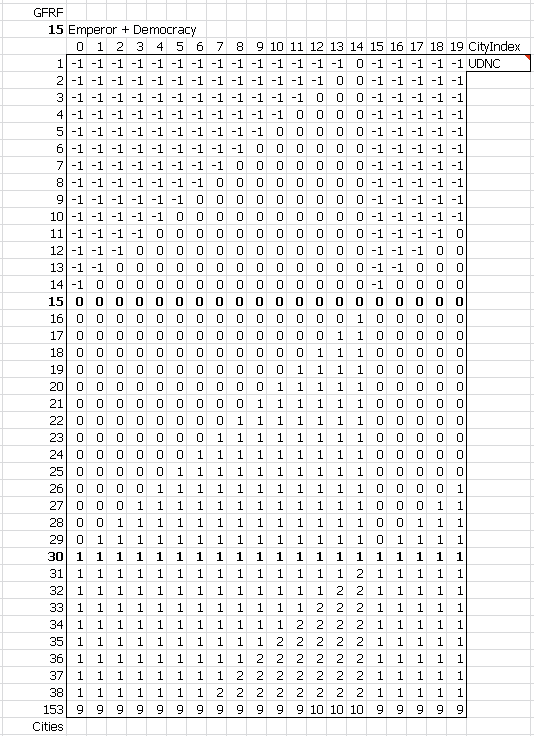 So as was stated before, GFRF is the maximum number of cities which doesn’t cause additional unhappiness due to number of cities. With GFRF = 15, this can be seen at the row for 15 cities. And at the row for 30 cities (double of 15) all cities have one additional unhappy citizen. Between those, the numbers gradually increase in the triangle-like pattern. And so on. Once you understand this pattern, you can make a table for other combinations of Difficulty Level, Government and Map size.
Now the initial total Unhappiness is equal to:
U = BU + UDNC
By the way, AI’s initial total Unhappiness is always equal to Base Unhappiness at King level:
Uai = S - 1 - (CSFU - 5)
Finally, number of Angry citizens (black) is the surplus of Unhappiness over City Size:
If U > S
A = U - S
U = S
Note. U includes A. This means A is number of Unhappy citizens additionally converted from red to black.
Initial Happiness is zero.

Normalization after each phase​

F – number of Free Citizens (those who do not work on the map, i.e. - specialists).
a) Balance values

C-like:
Note. Clamp function ensures that the first argument is between second and third.

b) Store H, U, A in arrays at respective index for current phase. It is used, for example, in city window in Happiness Analysis tab.

As you can see, after each phase, before normalization, sum H + U can become larger than available places in city (S - F). The normalization procedure just balances values and puts them in the boundaries, before finalizing the current phase.

However, the underlying algorithm may raise some questions. For example, after phase 1, the value of H appears (brought by luxury). If after that, H and U do not fit in the city in total, then if A is present, the number of A and U simply decreases, creating the feeling that H will replace A. Actually, this is how the well-known A to H conversion glitch (or "happiness quirk") appears. When A is no more, U decreases with H, as if they cancel each other out.

At this simplified example further phases have no effect. So, the final picture is:
HUUUUUUAAA
This is what you see on the city screen. Remember that U includes A. Here A = 3 and U = 9 (not 6!). Think of A as a second row of U, as if A were "shading" U standing in front of it. This is important because in most cases A is not taken into account. For example, when deciding whether to put a city into disorder or into WLTKD mode, the A is not taken into account at all.

City WITH Shake's but still riot!?!?

I'm currently playing a game on Deity and my city Boston size 8 has build Shakespeare's Theatre and is currently in Civil Disorder?!?! Must be somekind of bug? Or do I miss something here... Never seen this before... I clicked on 'Happy' inside the cityscreen: normal: 6 black 2 red people...
forums.civfanatics.com

I play on Deity level, and I have a wonder city. In that city, I have built Shakespeare's Theatre. When I discovered Communism, one citizen in that city became unhappy! How's that possible when I have Shakespeare's Theatre in the city?
forums.civfanatics.com
Because of angry citizens before phase 4, this wonder will not eliminate the discontent completely. Let’s show this.
Before phase 4 we have the same picture:
HUUUUUUUUU
.......AAA

Now we have the city with unhappy citizens even with Shakespeare's Theatre:
HCCCCCCUUU

Just in case, I will provide the complete decompiled code of the procedures.

This is...very complicated. I had no idea that it wasn't just some simple arithmetic. No wonder there could be some weird effects.
-If circular logic didn't make sense, I wouldn't use it.
-If it weren't for meta-humor, this statement wouldn't be funny.

I have a YouTube channel! Currently contains cheesy awesome music videos and some Redstone Computers I built in minecraft.

Update.
Corrected some typos, detailed the description of the remaining phases, added a couple of examples.

@FoxAhead - I was marveled that you described the function and I am even more amazed that you took time to detail the description and add examples. Chapeau bas!

From my perspective step 3 is bugged - I think the programmers forgot to finish the part "if A" - I imagine the function should look something like:

Alternatively, the "else" clause should be deleted and the code should be executed in every iteration.

Does anyone see a reason why there is a bonus for having angry citizens?
"Victi vincimus"

Realistic experience from ancient to future era, based on RFC​
You must log in or register to reply here.

A look at Rationalism
2

[Vote] (3-18) Proposal: Royal Library generates as many Great Scientist Points as the School of Philosophy