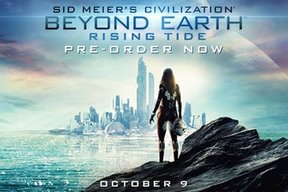 Players who pre-purchase the game will receive a 10% discount on their purchases. Rising Tide is currently in development for Windows PC, as well as Mac and Linux through Aspyr Media, and scheduled for worldwide release on all platforms on October 9, 2015.


The Exoplanets Map Pack features six custom maps inspired by real exoplanets, including:
New players who participate in the free-to-play weekend on Steam will have until 1:00 p.m. EDT on Monday, August 17, 2015 to purchase Civilization: Beyond Earth or the Civilization Beyond Earth: The Collection for more than 10% off, and retain their in-game progress.
You must log in or register to reply here.

PCGamer - Civilization: From Alpha Centauri To Beyond Earth

PolyCast 406: It's A Lot Better Than Watergate