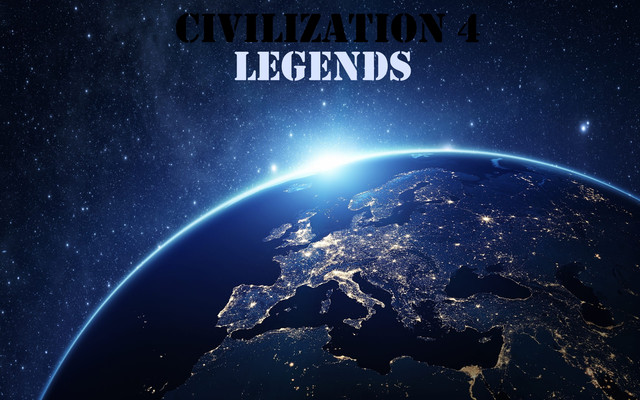 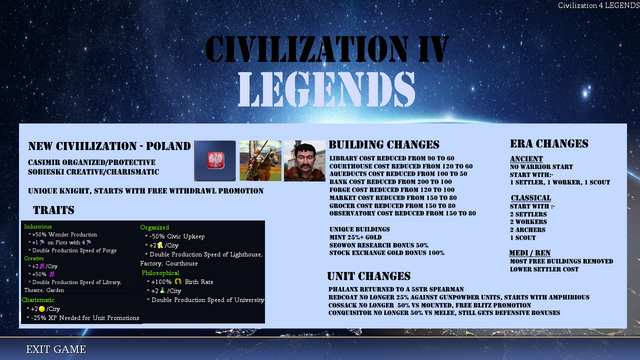 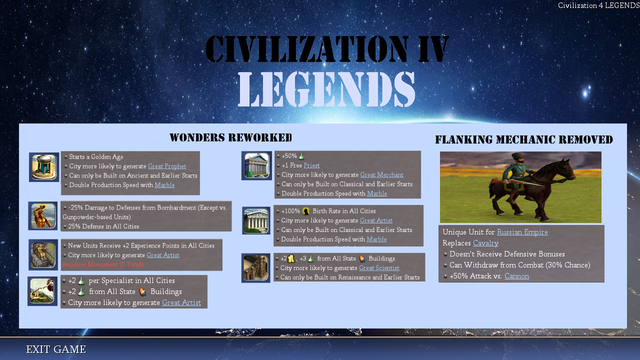 TODO:​
Edit the SDK
Individual teching in teams - This is the main idea behind the mod, each player in the team has their own tech tree and research. playing a 5v5 ancient game and have copper in capital? Skip iron working and secure a religion for your new city. In the back on a 3v3 inland sea game, tech towards astro while your teammates go for gunpowder. Adds a whole new level of depth to the multiplayer experience.

Random great person names - Randomly pooled from a list of past and present players nicknames from the civ4 multiplayer community.

Aggressive
Free Combat I promotion of melee and gunpowder units.
Double production of Barracks and Drydock

Financial
1+ gold on plots with 2
double productions of Banks

Wonders
The Oracle - Now grants a goldenage instead of a free technology
The Partheron - Global GP bonus increased from 50% to 100%
The Temple Of Artemus - Gets an additional bonus of 50% research in built city
The Statue of Zeus - Now gives +2XP in all cities, replaces war weariness
The Colossus - 25% global city defence, 25%- bombardment in this city
The Sistine Chapel - +2 research for each specialist, +2 research for each state building built
University of Sankore - +2 gold and +3 research from all state buildings
Statue of liberty - Adds +1 gold on coastal tiles, replacing free GP, cost reduced from 1500 to 1000

Units:
Phalanx returned to a 5 str Spearman like in vanilla
Redcoat no longer 25% against gunpowder units, starts with amphibious
Cossack no longer 50% vs mounted, Free Blitz promotion
Conquisitor no longer 50% vs melee, still gets defensive bonuses
Last edited: Jan 15, 2022
G

I can't believe I missed this !
The forum random links just offered it to me !

We had the same idea to move the MP community forward, it's interesting a lot of out ideas overlap perfectly !

In the end it took 4 years but the MP scene has broadly moved to my mod : Beyond the game (links below).

Your links both download and discord expired sadly ?
What I could do is integrate all your ideas that are different into Options in BTG (lots of options).
Particularly the one you tech by yourself is novel and I'd like to see it !

Beyond the play - Community MOD

This is the official thread of the renewed version of the then Beyond the Game multiplayer community MOD (originally designed on the forum C4P). The MOD has been redesigned from scratch to accommodate both multiplayer and single player play, but with a very strong focus on competitive...
forums.civfanatics.com

Check out the Civ4 Teamers community on Discord - hang out with 93 other members and enjoy free voice and text chat.

Use the Competitive Multiplayer Mapscript Pack, for BTS & BTG
https://forums.civfanatics.com/threads/competitive-multiplayer-mapscript-pack.669336/
You must log in or register to reply here.

Changing the Fog of War to look like clouds (Civ5 style)

Gatecrashers: Civilization IV: The Games That Made Us