I've made notes of Island formations periodically in Communitu_79, and I found a few good examples to highlight. I find it very common that islands in Communitu....while they might seem good at first....are actually not that great. I'll keep this thread open and add to it as I find more.

My general summary of the issues: 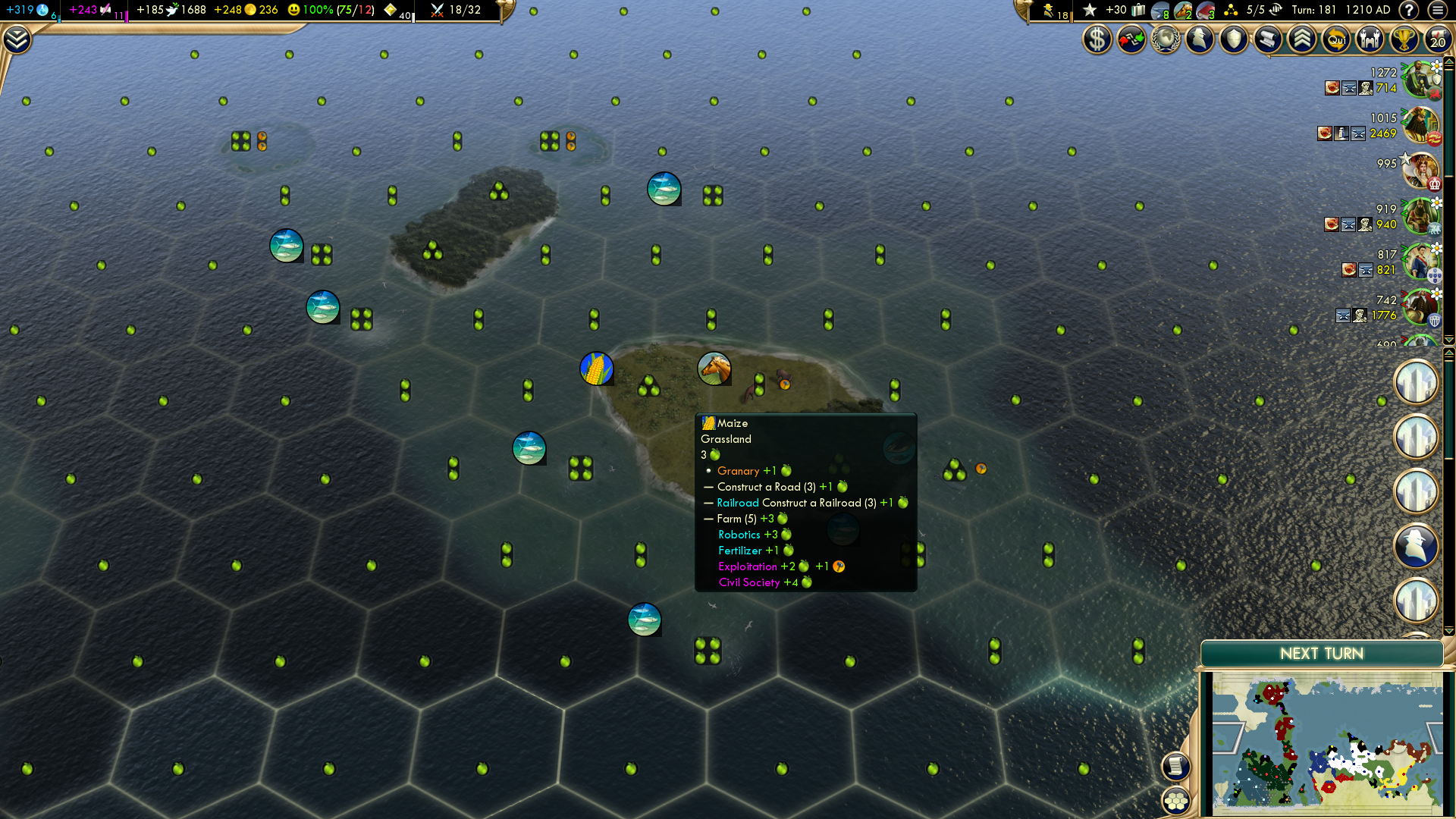 Settling that corn spot looks like it could be good. I got a horse, 4 fish, and a whale. What's not to love? Except its got exposure to 3 water tiles, making this one insanely vulnerable to naval attack. This island will need a navy for the rest of its life for protection. And the hammer potential is garbage. This city will grow like a weed with no hammers to help it, it will be eternally drowning in happiness, or you will need to spend thousands of gold on investments to make its infrastructure useful. Considering it will permanently reduce your culture/science output as well due to your size, its a bad investment. 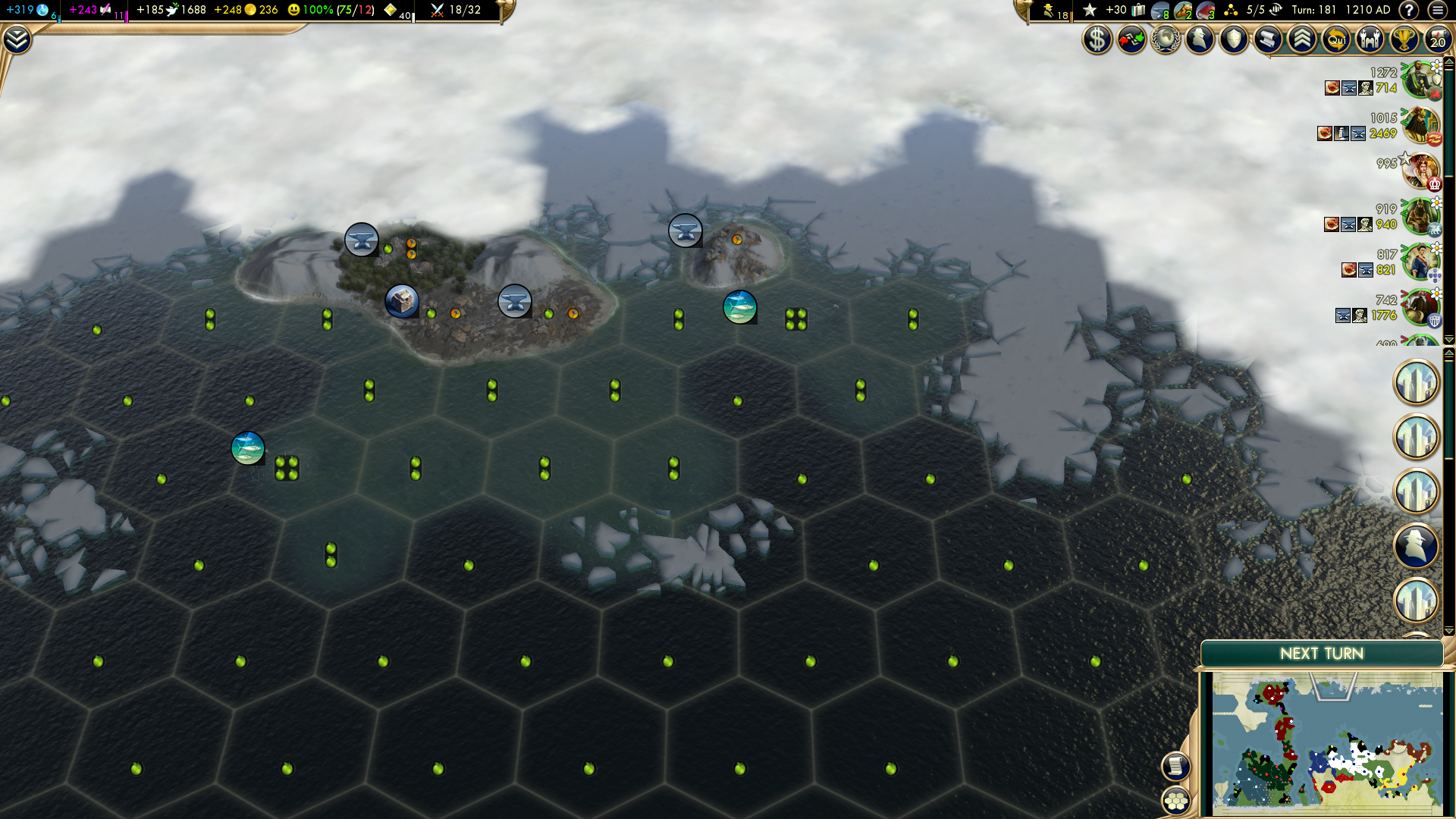 I could grab 4 iron here. With 2 fish and a number of good mine resources, this would seem like a city that could have a nice hammer balance. And...its close, so close. But again, 3 open water means a painfully vulnerble city, and since these islands are not settled to the midgame they need to generate real potential. 4 iron is decent, but there's not enough land here to grow into anything useful. At best I might be able to get this to a point where its not costing me anything due to the culture/science loss. 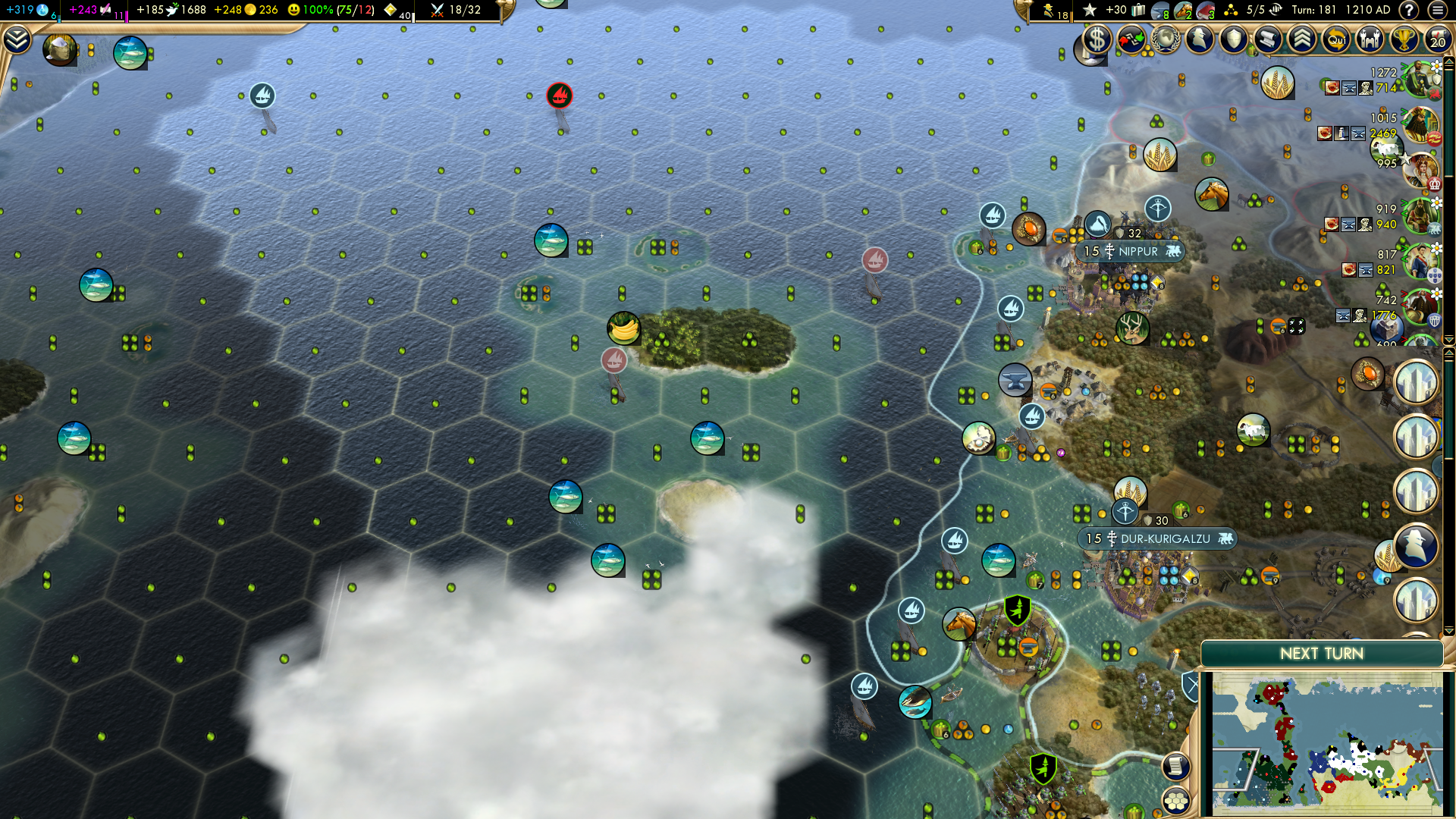 Similar to Example 1, a nice grouping of sea resources killed by a lack of good production tiles and painfully open water terrain, a city that will need babysitting all game. 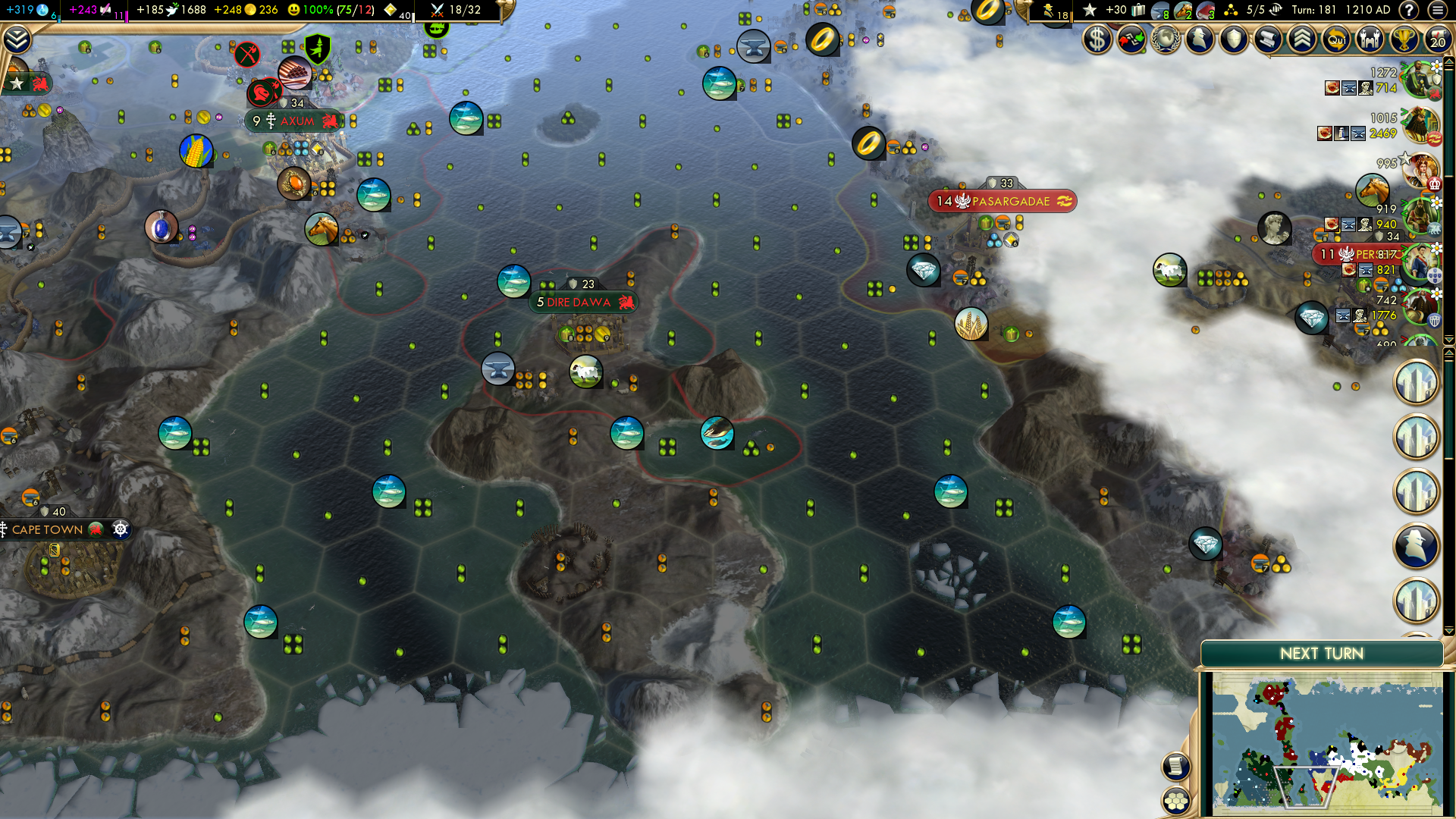 This is a good island spot, though the AI settled it one tile off from perfection. You can get your vulnerability down to 2 water tiles and the open water is limited so its easier to fight water with land units fortified in the hills. 3 fish and a whale, lots of mines for a real solid production base. This is a great island to settle.

Example 5: The map just loves to make these dinky little islands right at the top that are always garbage. 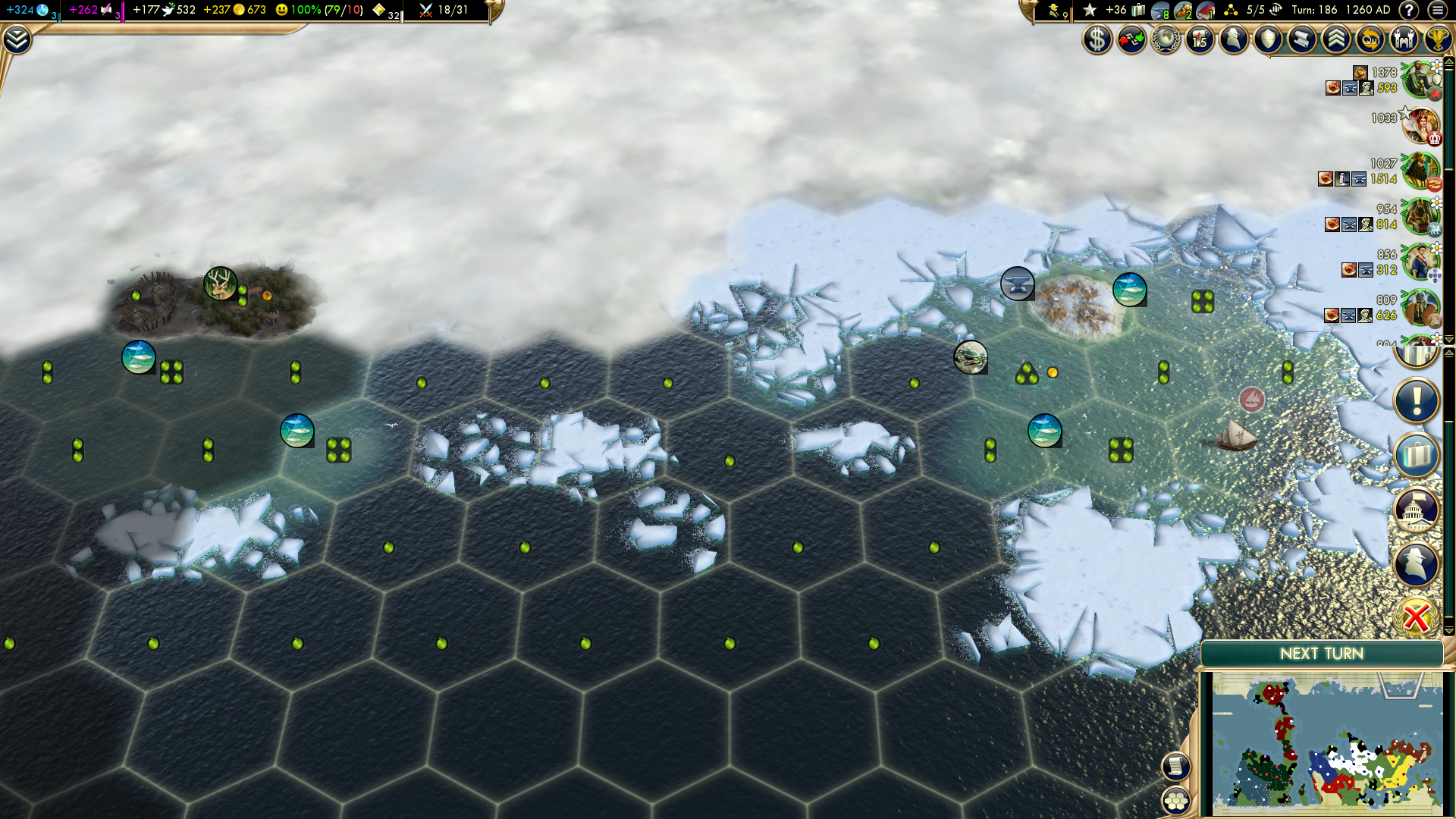 So less and bigger islands would help here.

The use of terrains 'as is' is a challenge that I love most in civ v. I would not like a maps pourposely designed with natural bastions.
N

Personally, I think island should remain a strategic location/outpost first, then a prosperous city second.
Having large size island is really strong since you can stuff a lot of military power there which can deal with large naval force even if you don't have one yourself, which is rather illogical.
S

nekokon said:
Personally, I think island should remain a strategic location/outpost first, then a prosperous city second.
Click to expand...

The issue is the expense of cities. The permanent drain they put on your culture/science/happiness is a big deal, and so they need to pull their own weight.
N

That's where I disagree. The choice of making a city in a strategic location despite possible drain on resource is a very important choice, if they can also pull their own weight there's no more choice, just rush to place them asap wherever you can.
S

nekokon said:
That's where I disagree. The choice of making a city in a strategic location despite possible drain on resource is a very important choice, if they can also pull their own weight there's no more choice, just rush to place them asap wherever you can.
Click to expand...

Yeah but its the ASAP that the real strategy lies.

There is A LOT going in that phase of the game. You can rush middle for astronomy, south for machinery, north for civil service/banking. You might be creating a big fleet or army to prepare for renaissance warfare. Its not as simple as "build settlers and take it, duh"....that is like saying "build buildings, duh". The strategy is in the timing and execution.

The problem I have right now is I get to do almost no middle game expansion, because most of the spots are just newb traps. So the AI gobbles them up because they aren't worth me pursuing.
N

I don't think the timings (which would happen throughout the whole game) are qualified as important choices. You generally should already have a solid plan of when to do what way ahead, and the real choice would be the one that presents at the moment you stump upon that island - to settle there or not. Later on or right away doesn't really matter, not like you're gonna change your mind 100 turns later unless you found something new (like more oils)
M

Changing small island grasslands to plains would help better balance production and food for these tiles. It's probably not much, and I don't know how significantly it would impact what resources (bonus or otherwise) can spawn on them, but it strikes me as a low-cost, quick change that could be made while continuing to discuss this issue.
B

Hm that's a good point tbh, it's a small step but a step nonetheless. I think buffing engineer specialists would help islands immensely, at least you could focus production to get important buildings, and they have the excess food to waste on specialists anyway. About the island defenses, I always wanted to replicate the air defense mechanic for naval cities, a building(line) like coastal fortification providing +x CS against naval attacks would make a lot sense, and we could remove the harbor HP bonus that way. It could be possible via domain bonuses, but I know next to nothing about how city warfare is calculated.
This is far off but I occasionally work on reefs feature a la civ6, logically it'd spawn more around islands, buffing them a bit.
WHoward's Military Log for VP - Era Restricted Generals&Admirals - Generals Spawn at Nearest City
Simplified Warfare & Reduced Supply Cap - No Navy by Lake Cities - Separate Naval Supply
Vibrant Terrain Textures
N

Realistically small islands would consist of only hill/mountain due to new/young seismic activity, so turning them all into hill can be a minor change to improve small islands while still keeping both realism and gameplay element in mind (give extra production to balance out abundant food source from sea resource/tile and extra defense for strategic purpose)
J

nekokon said:
Realistically small islands would consist of only hill/mountain due to new/young seismic activity, so turning them all into hill can be a minor change to improve small islands while still keeping both realism and gameplay element in mind (give extra production to balance out abundant food source from sea resource/tile and extra defense for strategic purpose)
Click to expand...

This screams proposal to me.
R

I don't think it's a big deal that an island out in the middle of nowhere isn't militarily defensible.
with the caveat that I usually play peacefully, I've only ever had the AI try to take island cities if said island/city is right next to them

but yeah, lacking production is indeed a big issue. I only grab these kinds of island cities if I've got god of the sea, to make those fish give out decent chunks of production. Or if I'm playing russia with all the border growth traits so that every settle with lots of space to expand is a good settle.
You must log in or register to reply here.