Regent tempted me again to go for a 20k victory.
Settled in place. the capital produced one warrior, one settler and then only wonders and cultural buildings.
I headed for Philosophy to get an early Republic.
I played completely peaceful, no wars in the whole game. One roman and one babylonian city culture flipped.
With the tech advance I had always stronger units than the opponents. Only in the early game I had to give Mysticism to Rome, because my military was too weak for a war.

Thanks templar_x for the nice game set up, ecpecially for the strategic recources iron, coal, salpeter and rubber.

I tried to submit, but gotm.civfanatics.net seems to be down all day already?!

Anyway, I went for space, on Regent it should be easy to maintain 4t-research for most of the game, and with 4 scientifics in the game (which I only learned later, after I had already settled for a VC condition), the pace should be even faster.
I remained very good friends with Babylon and Greece throughout the game, to get good prices for their techs. Tried the same with Sumer, but they sneak-attacked me a few turns before the end of the IA. By the end of the IA, I had reduced them to two towns, and then was lucky to make peace with them and collect their freebee. When all the IA freebees were collected, I thought about whether to conquer Babylon as well, but as I was already at 65% territory from gobbling up Rome, the Netherlands, Egypt, China and Sumer, I decided against it. I was always able to trade their two lux resources for an outdated tech, so no need to conquer them. And they were never a threat, and neither was Greece, who seemed to have suffered a bit in an early war against Sumer, before I met them, and they always remained quite small. So Greece and Babylon were my good friends and allies throughout the game, while the remaining AIs "did not stand the test of time"...

Quintillus said:
I still had some idea of roping in Babylon for a military alliance against Rome, though for some reason the option didn't appear even after I had Writing and an embassy.
Click to expand...

Can you attach a .sav? I just tried it in an old .sav from my game, and it works as expected?!
Current PBEMs:
No Treasure for Pirates (England)

Man, 20k victory, my first ever, in 1884 AD. Thought maybe no one would go for that victory condition, but I was wrong. I was getting 124 culture a turn at the end, and eliminated all civs but Greece, who were constrained to Toxic Isle. 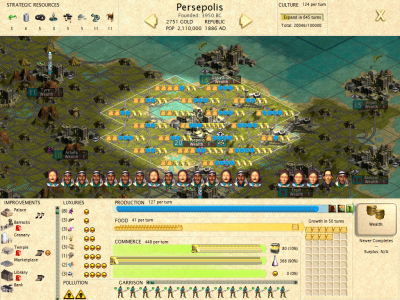 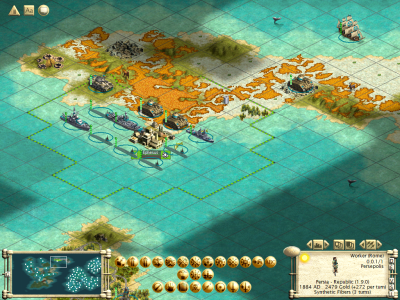 I managed to keep some notes, posted below. I settled northeast (in the same spot as Ruin), happy with the hills, wines, and bonus grass, even through I don't have any coast, and did 20k in this town. I build 2 warriors, a temple, and a settler before starting on AA wonders.

I ended up in an early war with Rome, but they didn't have iron yet, so it wasn't a big deal. The Dutch attack, razing a town that I can't reinforce quickly enough, but then play nicely for the rest of the game. After that, as enemies declare on my I wipe them out (at least mostly - I leave some with single towns on an island). For me, there was a lot of early-ish warfare, but I didn't get a MGL until 1650. I leave China and the Dutch mostly alone.

Notes:
Turn 0 – worker east, sees desert & coast, suggests water to north is salty. Settler NE to settle – give up on coastal capital since this is so nice – 4 BG, 5 hills, fresh water, wines.
Settle, CB at max, worker to BG
2 warriors, temple
Hut gives map
Hut gives pottery
Hut gives warrior code
Meet Rome, trade Pottery and WC for Alphabet + 10 g
Temple in 2850.
Settler, pyramids
Hut gives maps
Hut gives mysticism
2430 settle east on desert/coast
Hut gives barbs
2150 meet Babylon, no trades possible
hut gives maps
1475 Rome demands writing, I decline, they declare
1225 Meet Dutch. Hold off on trades due to philosophy soon – they have writing
1150 Sell writing to Babylon
1100 Finish pyramids, start oracle. Rome arrives
1025 learn Republic, revolt. Have killed 3 Roman warriors, hut gives 50 g. Trade mysticism to Dutch for iron working and 60 g
800 Make peace – Rome has hooked up iron but no units yet. Trade techs for worker, gold, techs
750 settle by cow and iron on east coast
630 MoM, start golden age
590 Library, start oracle
Dutch land near Pasagardae, move units to retake it
They destroy it instead, but are then killed
470 Crashes, start from autosave
Finish Oracle, start Glib
660 CE meet Greeks, Chinese, Sumerians. Trade for monarchy and invention
1020 Babylonians declare, I ally Romans
Wipe out Babylonians
Wipe out Romans
Sumerians have declared war, so I then ship units over to take them on, in search of an MGL. Greece also declares, so I attack them, too.
1650 Finally get a great leader, make an army, start Heroic Epic
1695 China demands dyes, I give in, they attack anyway. Somehow their riders do not manage to destroy any of my mech infantry
1705 Egypt joins in due to ill-advised MPP with Sumeria. My power graph is 3x as big as everyone else put together, while Egypt has 2 towns. I just need to not cross the domination limit while waiting to hit 20k. I’m currently quite far from it, though.
1715 Eliminate Egypt, kick Sumeria off the continent and make peace with them; they have one town left.
1720 make peace with China.
1730 Kick Greece off continent and make peace; they have one town left.
Wait for the end.
R

I managed to keep some notes, posted below. I settled northeast (in the same spot as Ruin),
Click to expand...

Gosh, I was thinking I screwed up by not being able to build the coastal wonders, but I guess now I'll have to fall back on blaming the RNG
M

Ruin said:
Gosh, I was thinking I screwed up by not being able to build the coastal wonders, but I guess now I'll have to fall back on blaming the RNG
Click to expand...

The only coastal wonder that is particularly useful in a 20k city is the colossus. Any other coastal wonder usually shouldn't be built - or should be built elsewhere - because there are better options that give you more culture.

Without colossus you just need to build marketplace/bank a little earlier than you would if you had it. It's certainly nice to have colossus, but you don't 100% need it to get 20k culture.
C

Well, there aren't any wonders that are 100% needed, but having the option to build coastal wonders is really nice. The Great Lighthouse isn't bad for culture for a wonder, and sometimes it is available when nothing else is. Coastal means that the AI may not have a strong city available to build it. Magellan's isn't great for culture, but it often is available after a wonder cascade when other wonders aren't. Over the years, I've built a lot of 300-shield marketplaces when I could have had Magellan's if I'd been coastal. And there are plenty of times when no-one learns navigation until late, and it can be build during the cultural desert that is the late industrial age.

Marketplaces and banks only get built in a 20k city that has run out of culture to build - they are a sign that you haven't researched fast enough. (Well, you might buy a marketplace if there are happiness issues, but that is fairly unlikely post-Currency.)
You must log in or register to reply here.