Does anyone use Fisheries?

I have been playing quite a bit with fisheries lately. On paper they look meh but on screen it is quite different.

+1 food and +1 for an adjacent sea resource

however that is incorrect

+1 food and +1 for each adjacent resource.

Now considering you have a harbour with lighthouse (gives +1 food to tiles) this means a fishery nest to 1 resource is a 4 food 1 gold tile but it does get affected by Auckland.

It is fairly easy to get a double sea adjacency somewhere in your coastal water and that means a +5 food tile quite early.

The downside to fisheries apart from having to have Liang present is they provide no housing nor are affected by god of the sea or sadly aquariums. The city below is ecstatic, reached its max pop but at 57 production and 25 science per turn without a campus is not bad. Shame about the housing though, stops you getting a real mega city. 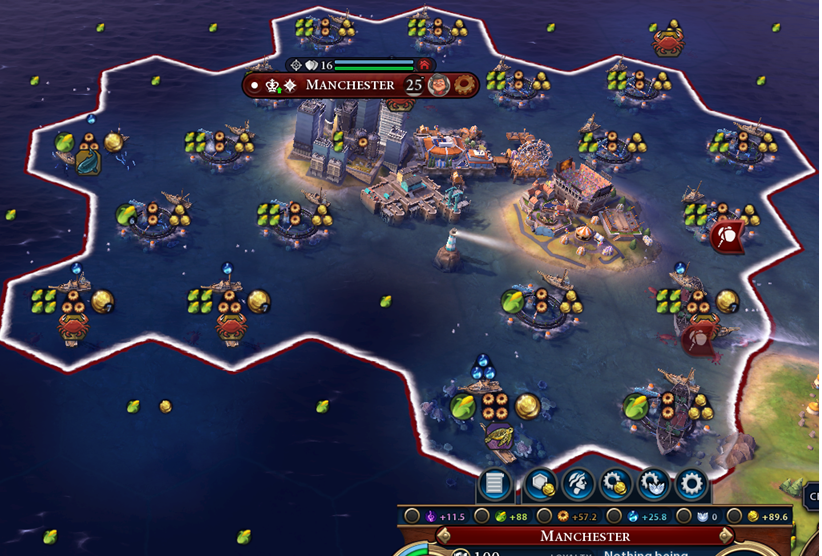 Yeah the lack of housing is a serious issue. I wish we could get housing on water, only Indonesia can. I haven't been using fisheries during my quick games, but if I draw out my games I'll use them. Mainly because it gives me something to do in later eras.

The other negative is having to move Liang around, which is time consuming. It takes a while to get fisheries set up in multiple cities.

My work of art: I didn't play the game long enough to max out my cities, and this is overkill, I know. The cities will probably never have enough housing to get any use out of all that food. 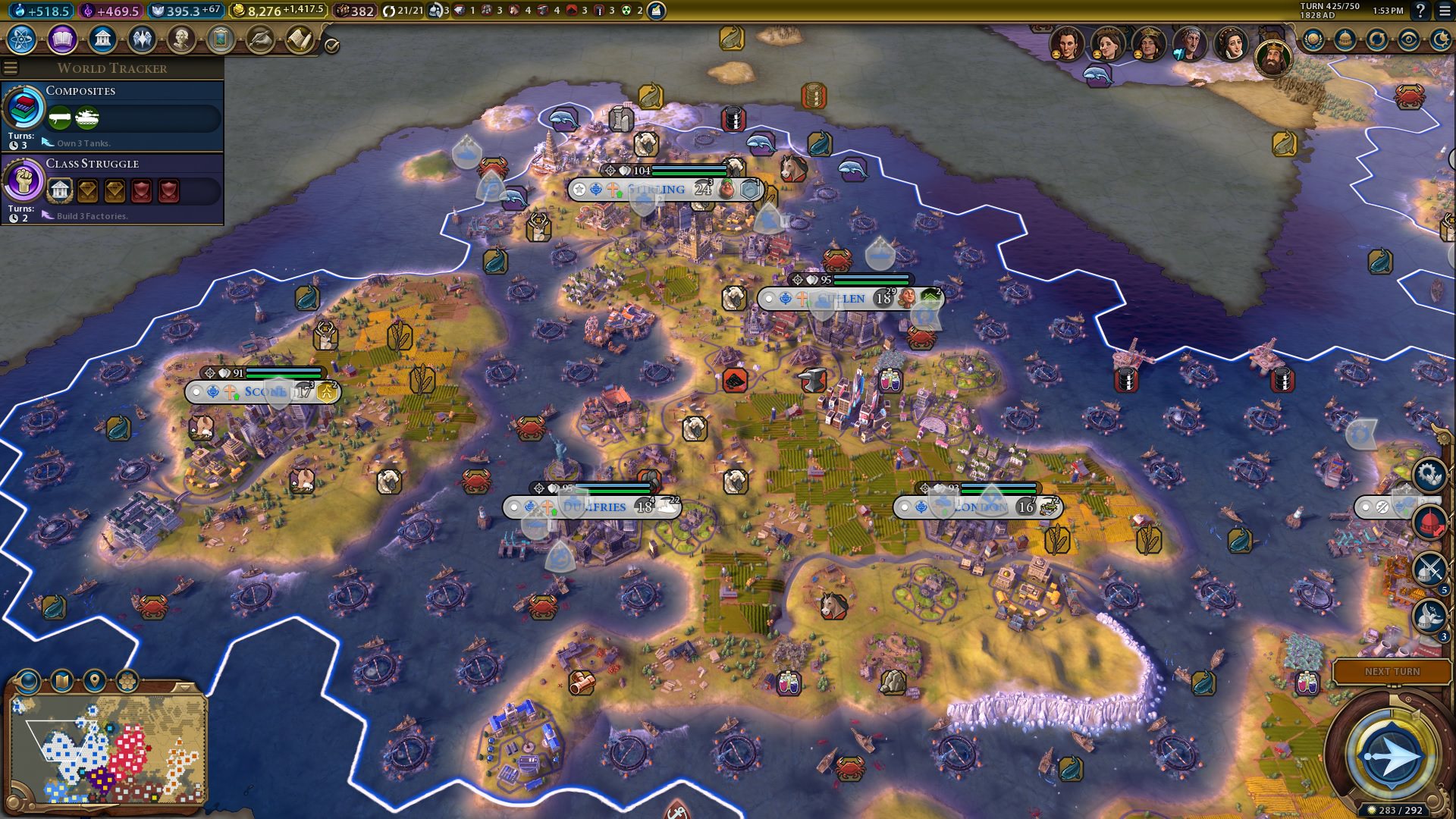 This God of mine relaxes

Sorry for the OT but I thought water parks and entertainment districts would be mutually exclusive... interesting. Do the local bonuses stack?

I build fisheries but late in the mid-game only, I feel there are better Governor promotions to get before fisheries. But i'm fond of founding cities in the snow which have 2 or 3 fish tiles plus 4 or 5 hill tiles then building many fisheries in the city.

Siptah said:
Sorry for the OT but I thought water parks and entertainment districts would be mutually exclusive... interesting. Do the local bonuses stack?
Click to expand...

they do stack, but you aren't supposed to be able to build them in the same city.


Leathaface said:
I feel there are better Governor promotions to get before fisheries.
Click to expand...

This as well, there are too many useful governor promotions to get before fisheries, that's why it's late game for me, if ever.
This God of mine relaxes

Fisheries + Suzerian of Auckland + Pantheon for +1 production from fishing boats + Harbors,Lighthouses,Docks + Neetherland or Indonesia = Superpower. In GS there would be also bonus for trade routes across ocean so finally there is reasson to become naval superpower.

Siptah said:
Sorry for the OT but I thought water parks and entertainment districts would be mutually exclusive... interesting. Do the local bonuses stack?
Click to expand...

If my Govt Plaza city (usually the capital of the first civ I eliminate) is on the coast, then I make limited use of Fisheries.
Holy Prophet of the Fanatics

By the time they're available I feel I don't need to grow my cities any longer as they have the 2-3 districts that actually matter towards my victory. So: no.

Fisheries are farms without the housing. Harbor buildings produce Housing though, so it works out.

To counter the Housing issue on my tiny island cities surrounded by fisheries I normally stick with monarchy and double up with the legacy card for 6 housing with all 3 walls; then keep the card in when I go to democracy for more housing for each district (1 tile islands only end up with 2 districts due to harbour and waterpark) but also having the new deal(?) policy in for more housing and amenities at the cost of 8 gold per turn. Otherwise Mohenjo-Daro helps with an additional +2 housing I believe. Provided I am not Norway or Indonesia; I would also use any other scare land tiles with in range for Encampments for the +2 housing (and production bonus) or even just the Campus for +1 housing from universities. With Norway I would get the housing from religious buildings and the pagoda for 3 extra housing (because you want the stave church for the extra sea resource production).

Of course Governor and Audience chamber helps, but if you like me you will end up having more cities on islands then there are governors in the game! So not too reliable and you have to focus on a few cities.

As for fisheries, I'm glad they are buffing them in Gathering Storm to give you +1 production if Liang is present, but it's going to be another pain when you are moving her around getting fisheries set up everywhere initially. 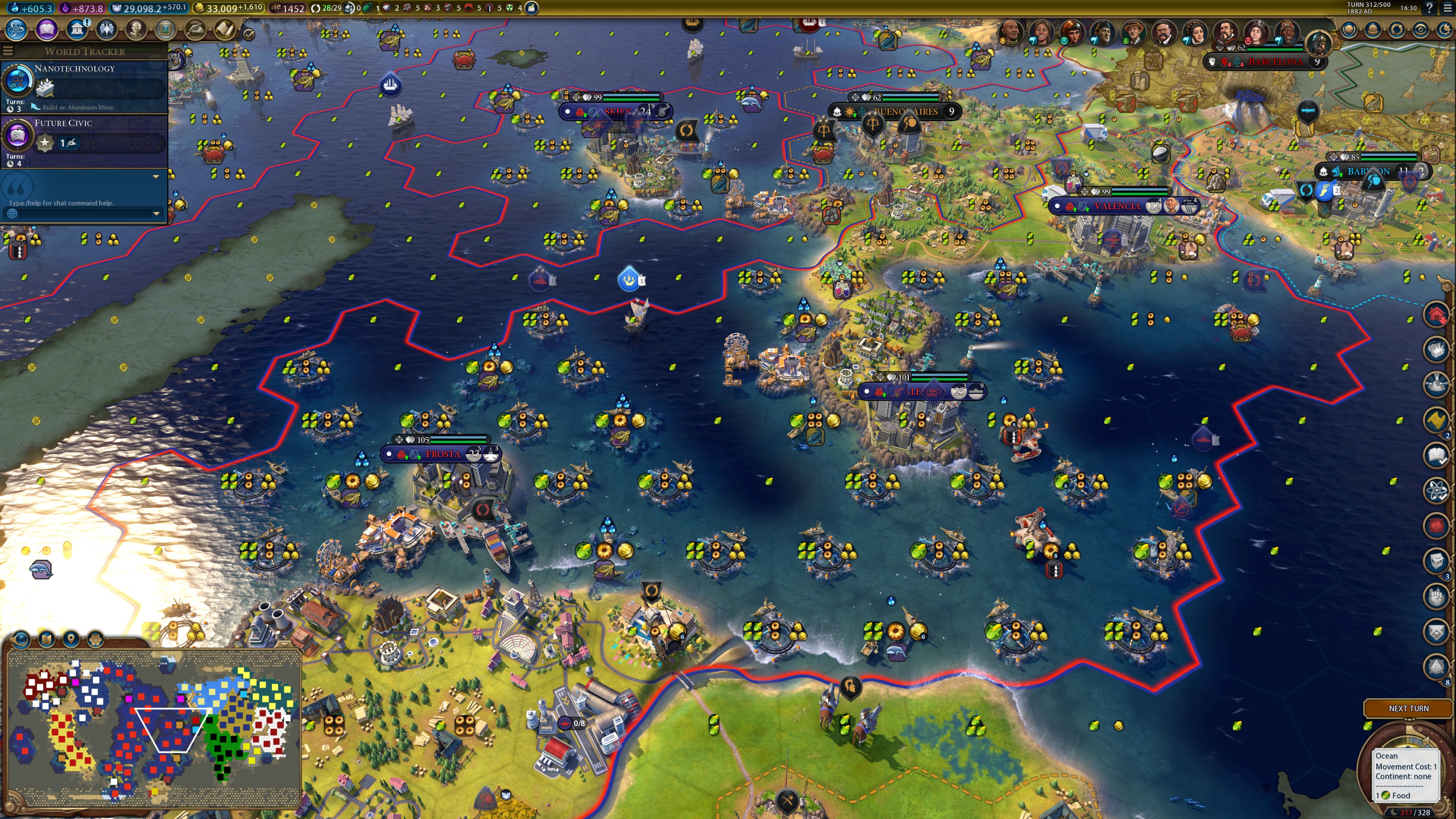 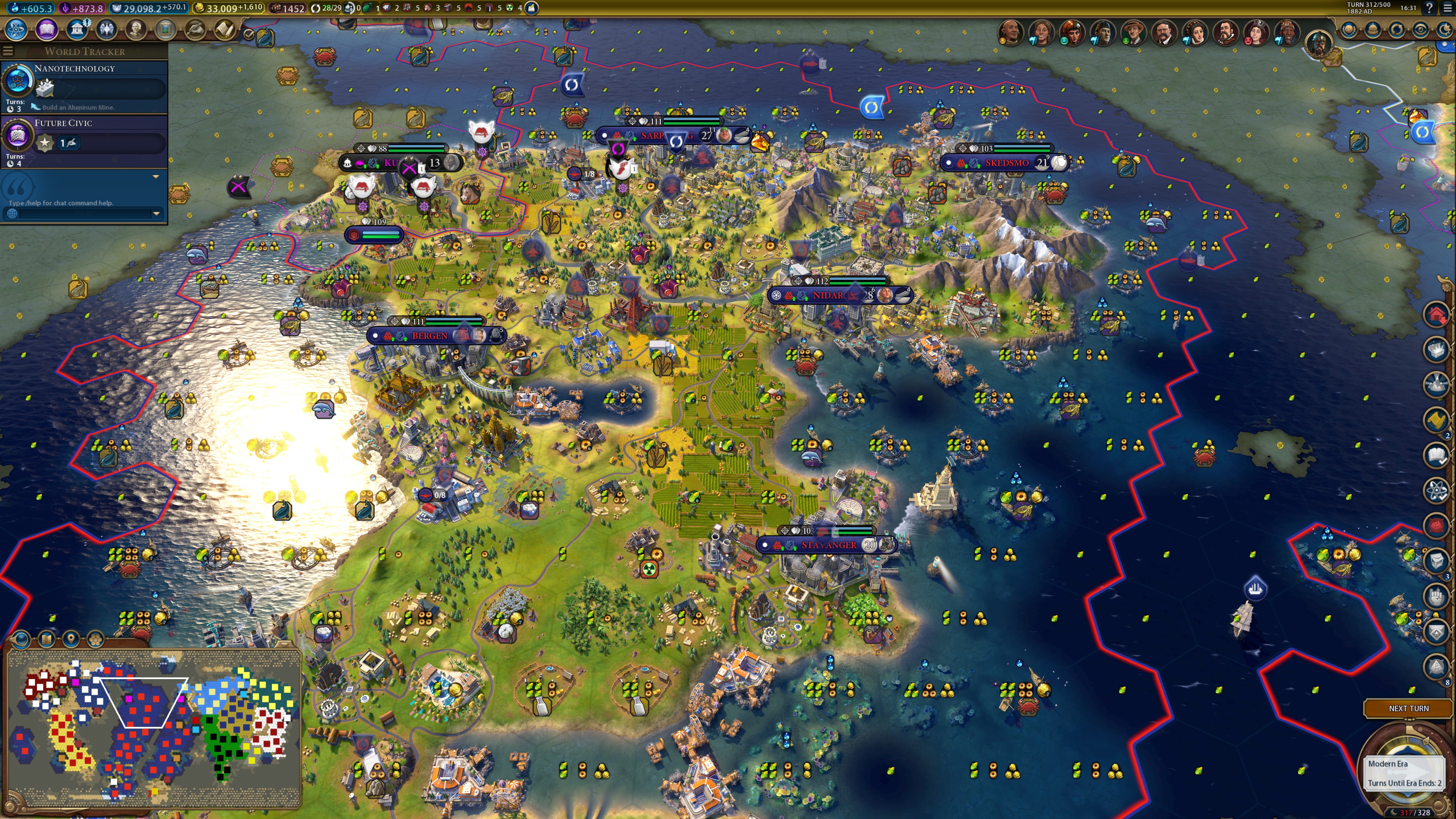 Well in good news there is a new coastal improvement that acts as a neighborhood called the Seastead. So it will enable additional housing in the late game by the time the sources of housing diminishes.
C

Their map graphic looks very out-of-place, so I don't use them for that reason alone. I think they are dumb.
Social Policies and The Other Things: https://steamcommunity.com/sharedfiles/filedetails/?id=2281681082

Ziad said:
Well in good news there is a new coastal improvement that acts as a neighborhood called the Seastead. So it will enable additional housing in the late game by the time the sources of housing diminishes.
Click to expand...

Ahh beat me to it. And I was just asking for housing above. I still only see myself building these in a few cities. Liang will probably stay in the production poor city.
This God of mine relaxes

Vote for me or die 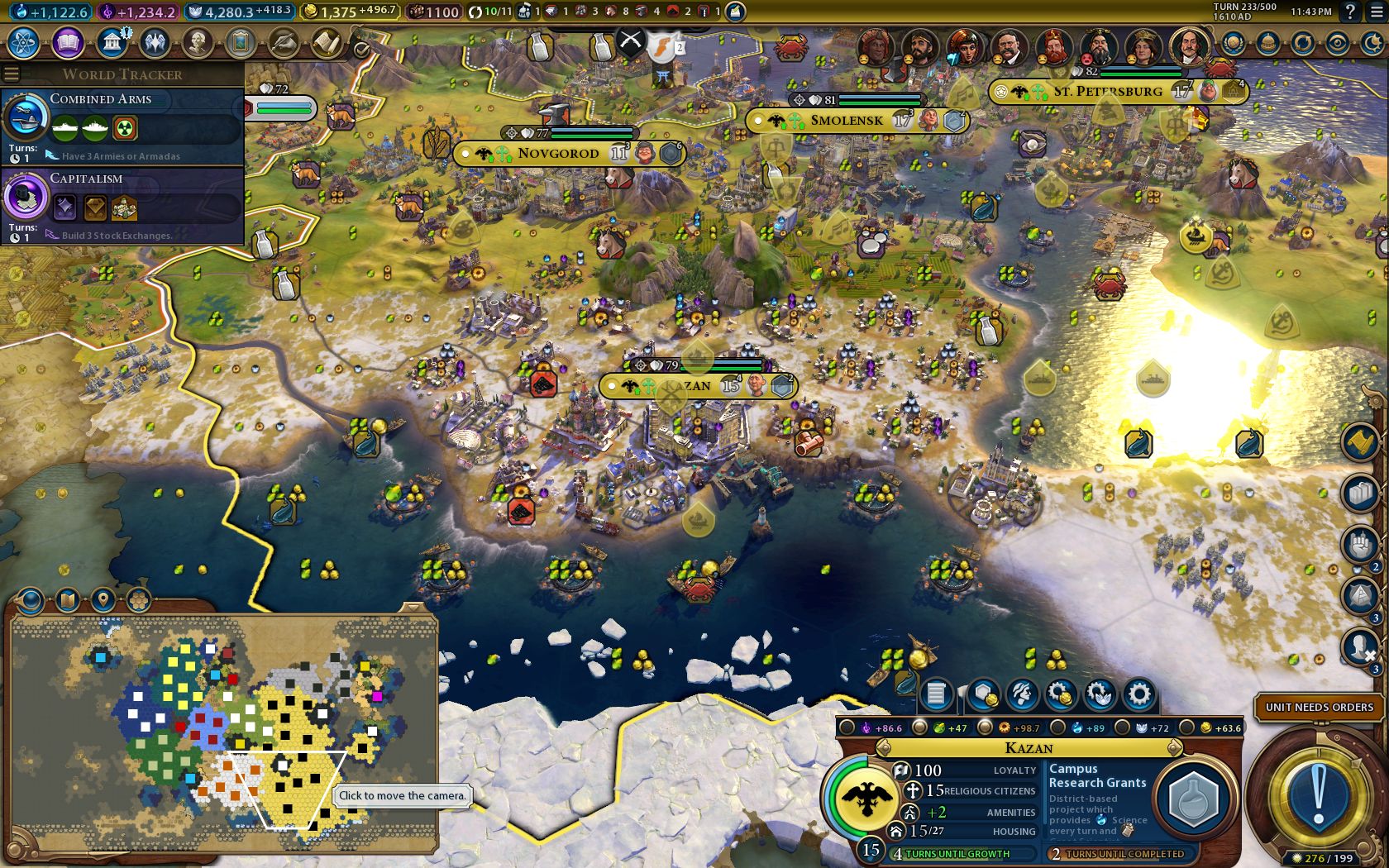 But seriously, they just take way too long to setup. Water tiles are useless without a harbor, so that already limits where they can be used. And spending a governor promotion and building charges to provide like 2 food. Now growth in itself is pretty weak, but the problem is it's also a hassle to find more amenities, or you just lose science. In these cases, my cities are already too big.

Maybe if it simply unlocked the improvement, that could be a thing. But as is, moving Liang around just for this is too much hassle. Or maybe they shouldn't be stuck to the coast and can be adjacent to an existing one.

Although you should note that harbor specialists provide science.... maybe make use out of that.
Last edited: Jan 30, 2019
With great power comes the great need to blame other people.
Mods I use in Civ 4: BUG

I do. In my last game as the Netherlands, I had a city on an island and I used Liang there to build fisheries. Population boomed, and I was able to have an average amount of production in that city.
I haven't edited my sig in months..... until now...

And remember, that sea resource doesn't have to be within three hexes of the city.

I use them mid game onwards... yes Liang is a pain to move around, but hey, those tiles are mostly useless, so adding fisheries on them is certainly a bonus for weak growth coastal cities

I've a feelling that the seastead will replace it in GS though... same cost (a charge) better returns...
U

I use them mostly if I'm bored, or if my empire happens to have a few island areas. I do find that by mid-game, I tend to have extra governor promotions, since I usually only need about 9 for a regular game (3xPingala, 3xReyna, Magnus, Liang, Amani), then after that, it depends more on my setup. If I want all the governors, either to place in captured cities, or to max out the middle government bonuses, then I need the first promos of the other 2 governors. If I expand a lot in settlers, or end up getting some monumentality golden ages, then Magnus' settler promo can be a nice one. Sometimes I want district buying (but sometimes I don't, if I want to keep Reyna fixed at one location). So if I have that extra promotion available, and have some cities that could use some sea tiles, it's not a bad use of my time. Especially with Auckland, since suddenly those sea tiles actually become quite good overall.
You must log in or register to reply here.

P
[GS] Fisheries : are they supposed to reduce production ?

What is the best tile improvement in the game?
2

6
Does the AI use Preserves properly?

S
Things that still irk me

[Vanilla] My opinion about Districts