I want to use my favorite unit without so much expense
Click to expand...

Well, it does make sense to me that a scout is self-sufficient compared to eg. pioneer who needs to be provided with food and resources. So even if we fix the scout salary regardless of his level, I think 20-25 gp/t would be adequate.

I don't see any reason to change the cost of military units based on level.
Click to expand...

I can see the reason being the same like it is for a scout to get a raise; a sargeant (lvl 2 soldier) or a colonel (lvl 3 soldier) would be more useful and would deserve a higher salary.
For gameplay simplicity I wouldn't do this though. I only pointed out that for the sake of consistency it would be correct to do so if ever scouts would be applied this scheme. Because both unit types do level up.

I prefer a fixed salary for both scouts and soldiers regardless of their level. I also agree that soldiers are harder to maintain when "deployed".

I will keep the actual system.
Indeed, a scout even beginner should know how to hunt in nature, we will not deliver him food by helicopter (not yet

)
And for soldiers, let make it simple. nothing change

Mod of Civilization IV Colonization
Dawn of a New Era

M07 any idea yet when the new version comes out? i can't find a "release date" anywhere

I will say, less than one mounth. I cannot be accurate on the estimation. When I am working on AI, it can be long. I am improving AI until the era 3.
Mod of Civilization IV Colonization
Dawn of a New Era

First impressions of the new feature under DoaNE 5.21/Revolutionary difficulty.

The beginning was really tight on budget - definitely no money to garrison a city with a soldier even if I wanted to. I like that. A colony has to establish itself first.
Generally I like the idea that during early ears the colonists are most useful just to stick to cities and work. Early on I had my Agriculturist pop out of the city just for 2-3 turns to upgrade a farm to level 1-2 and then return to work in the city until the Hardy Pioneer had built another farm elsewhere. Hardy vs Free Colonist really does make an impact on budget when building farms/mines/lodges. Roads, not that much. I had a Free Colonist Pioneer to help with roads at one point.
I had built a Convoys of military to transport colonists to a remote native village to drop them off there to learn and later to bring them quickly back.

Tight money during first two decades often had me to make difficult spending decisions. I had eg. 3,5k gold and set all the rare jobs on. Not really a happy situation should a Politician and a Veteran Soldier appear in the dock at the same time. But one has to risk a little and hope that those specialists are patient enough to wait for that next ship with goods to sell. It brings a new thrill to the game not felt before.

Expenditure costs feel well balanced to me.
I like the idea that a Politician's morale boost also affects budget. Feels even more pro-independence. 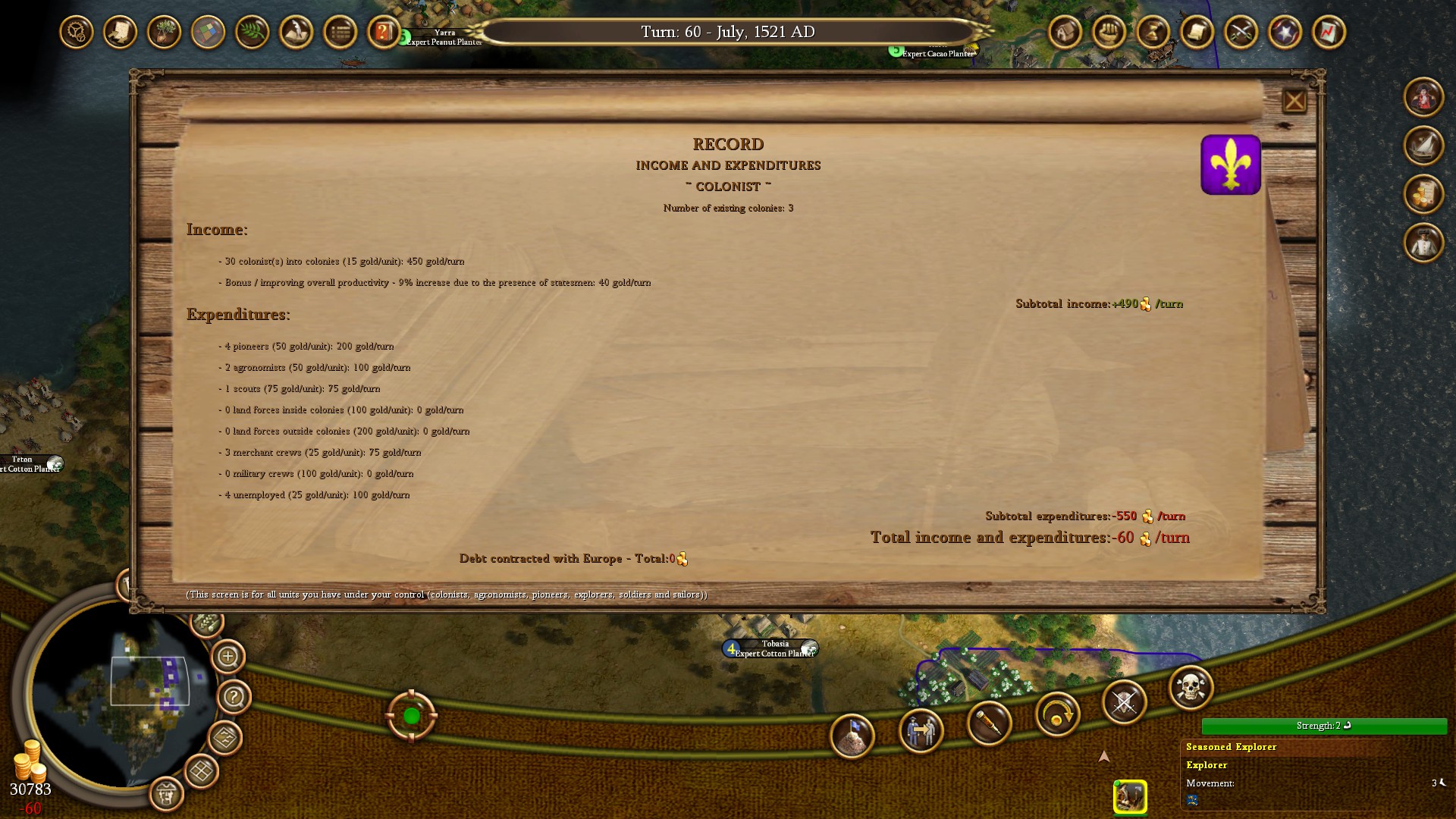 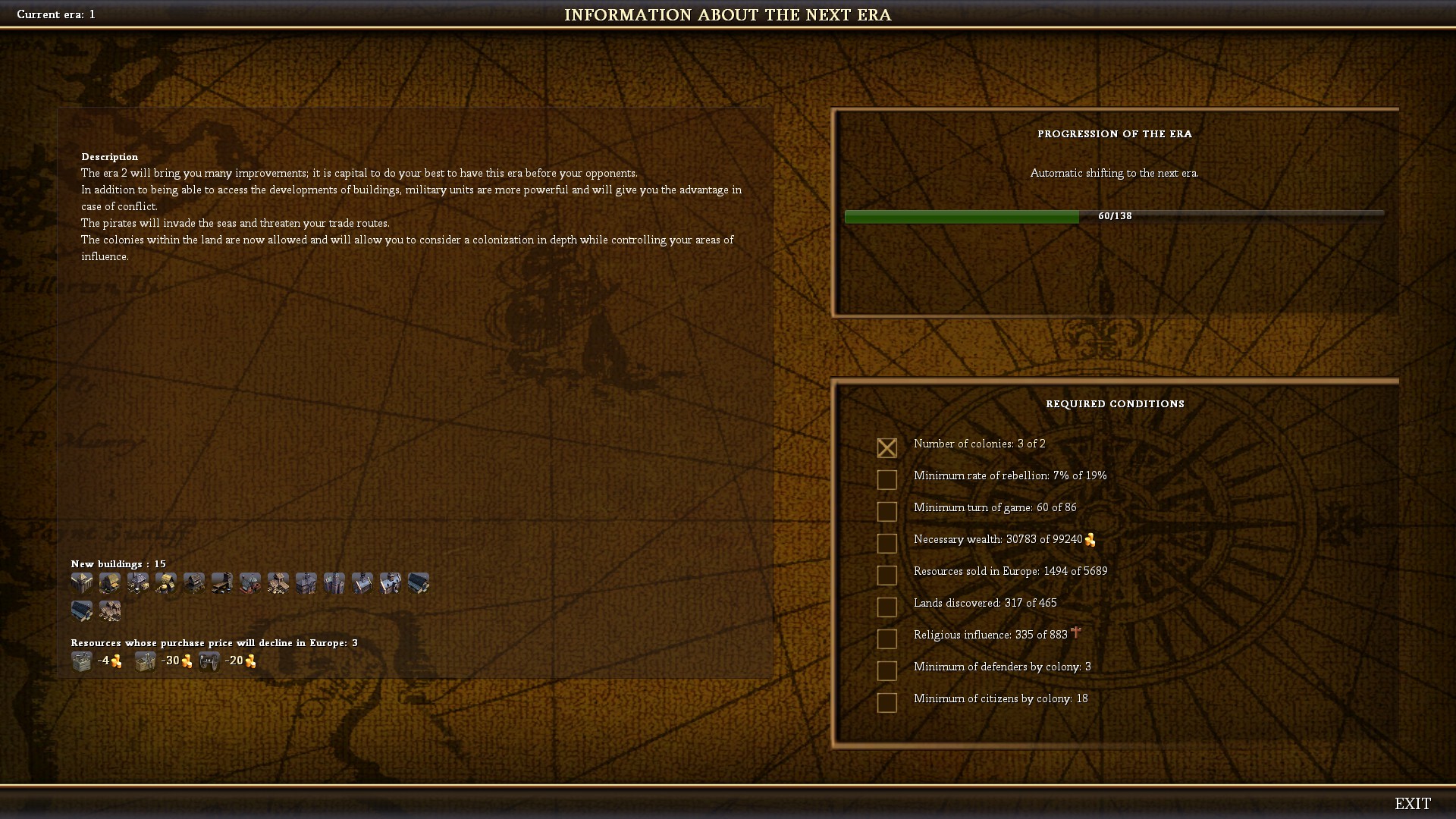 Thank you for the feed back.
I am glad to see it looks fine for you.
In lower difficulties, you earn more money by citizen, so it is easier to have a positive balance,
I really like that you had to change how to play the game with those new rules.
It was one of the main reason for this feature,
You will also have to change the way you are doing war. it will be costly for attackers, but stopping trades to Europe to your enemies will have a huge impact if every turn they loose 3k of golds.

Mod of Civilization IV Colonization
Dawn of a New Era

S
Follow these tips to become a "master" playing at emporer level and french on earth map.