Feedback: War of independence is fun; requirements for it are not

I tried to have a full game (until independence) of this mod before I give my feedback, but unfortunately the grind was a bit too much towards the end.

In essence: Very good work, thank you! The requirements for advancement to later eras, as well as the requirement to be in era 4 to declare independence are too much of a grind. They also dont seem to make much sense.

First of all, I thank the developers for the huge effort. Obviously, there cannot huge expectations, as Civ4:Col is dead content and you guys are the only ones that are still working on it. So thank you very much for it! This mod is much better than the original Civ4:Col. However, there are things that I did not like or things that maybe could be improved.

Maybe there is a strong particular reason why is it made that way, however it does not seem that there is a particular advantage that era 4 offers, which would make it crucial for me to get to the Era 4 in order to declare independence.

At the beginning of era 3 I already had strong inland production (of arms/colonists/horses) and army, which could probably take on the queen's land army. If there weren't the era 4 requirement, I would have probably attempted the war of independence in 20-30 turns after my forts and factories are finished. 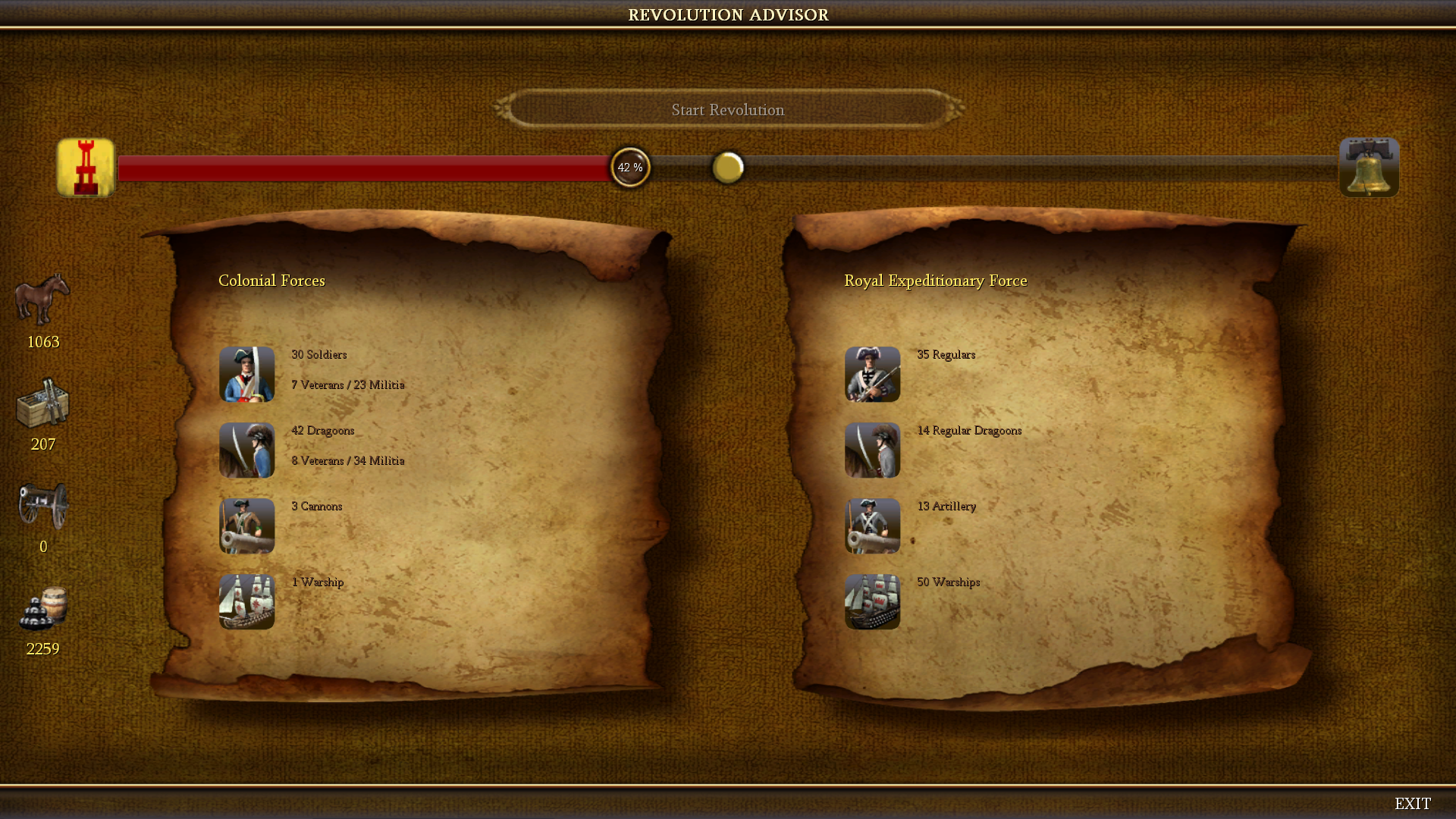 Unfortunately I have to get to Era 4 to attempt the war. That brings me to my next point.

It already seemed that the requirements for Era 3 required too much of a grind.

Why discourage having multiple colonies/force the population of colonies like this? One of the fun aspects of Civ:Col is to build your production economy. It makes sense to have multiple colonies and to give each colony certain specialization. For example, you don't need adjacent forest and a lumberjack per a colony if you can import your wood from another colony that is built in the middle of woods. Another example: if there are some silver ores far north away from your other colonies, it makes sense to build a colony there for the purpose only to collect this silver ore. Currently the game forces you to have 11/14 colonists in that colony.

When I play there are colonies that focus on raw tradeable resource (silver, coffee, cacao etc.) collection, colonies that focus raw manufacturing resource (ore, wood) collection, farming colonies (for colonist/horses production, big centralised (collects and distributes resources) manufacturing inland colonies, big centralised coastal colonies that serve as rally point for all tradeable goods. At the end every colony would have different population levels based on their actual functions. Currently the game, unfortunately, forces you to have very populated colonies.

b) There should not be a requirement to get a certain amount of defenders in each colony.
Similar idea here. Why force players to decentralise their army, when some colonies, especially inland ones, are completely safe? Furthermore, the current approach again penalises players for having multiple colonies.

The fix for this would be to set a requirement of total defending soldiers in all colonies. The value could be based on certain criteria. For example, number of colonies X average expected defenders per colony at given age X <1 coefficient based on the amount of colonies (more colonies = lower average per colony) X other coefficients?

In the current game at the beginning of Era 3 I have 28 merchant crews (mainly galleons) shipping goods to Europe at full capacity all the time. My rough estimate is that I would need at least like 100 more turns to get to the amount required for Era 4. And that is mainly selling cheap goods without any added value.

IMO the requirement should be based on the value of the goods sold to Europe, rather than the amount (have alternative requirements: reach X amount of value of trade with EU or X amount of goods). It should also be lower so that it does not take you that long to get to the Era 3 buildings. Maybe someone who enjoys playing Civ games at marathon speed will disagree with me.

d) Minimum rate of rebellion/ money scale?
Maybe turn down the scale a bit? In my game I need to accumulate 80% of rebellion supporters and 1.45 million cash in order to even get to the Era 4. That is so more than necessary rebellion support and more than enough cash than I will ever need in my life (after you produce everything by yourself, there is not that much need for cash anyway).

Maybe I just got an unlucky playthrough and the requirements seemed excessive based on the map/scenario settings. IDK, here is a picture for Era 4 Req's. 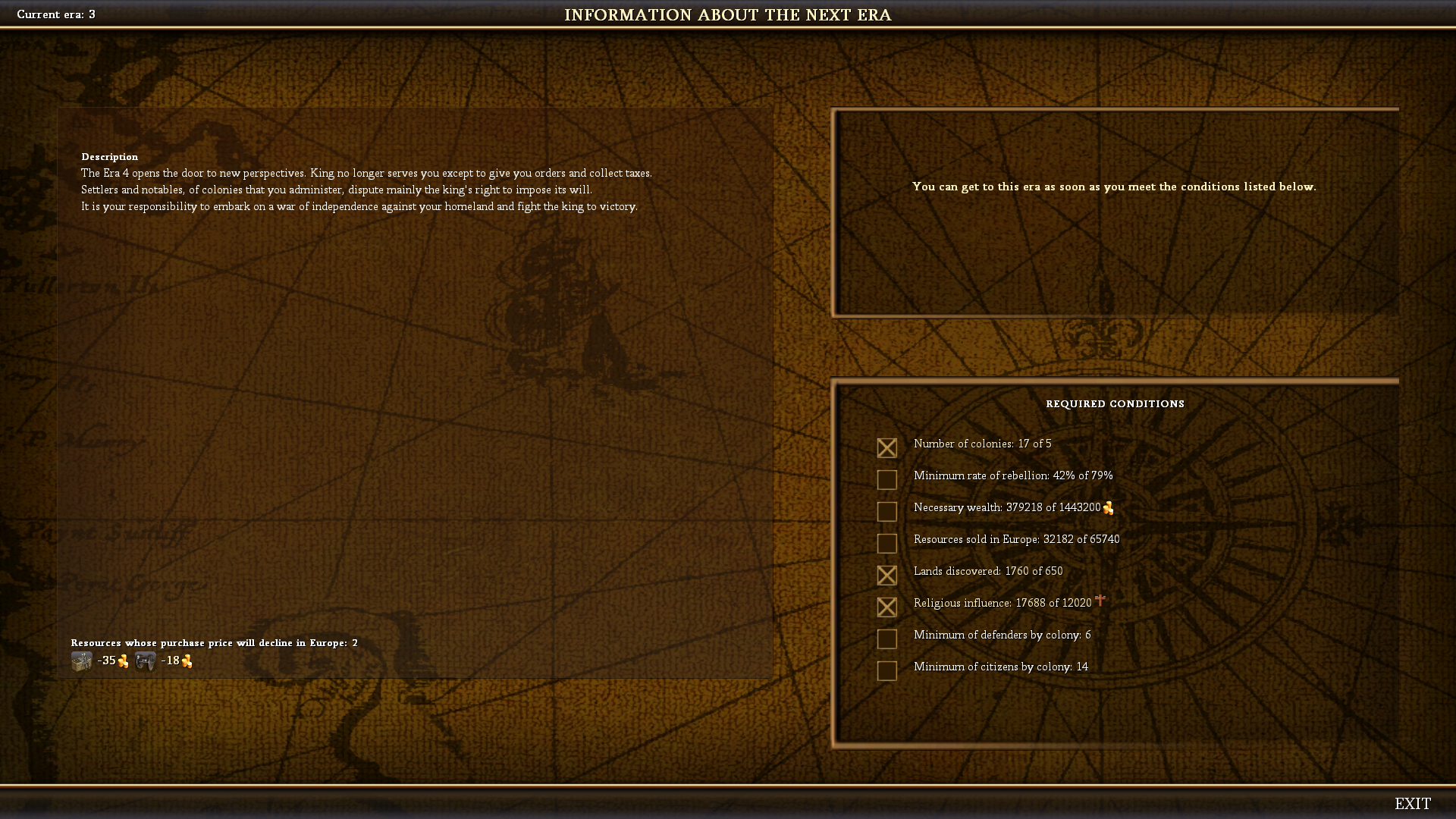 3. AI is (might be?) horrible
I must admit I played on explorers difficulty as it was my 1st time playing colonization in a long time and the first time playing this mod. I apologise if what expressed in the comment below would not have happened if the difficulty was higher.

The AI had a good start (score-wise), but then it seemed to go in a stalemate and not do anything. All AI players were close to eachother in a huge map. Thus, it would make sense that they either try to expand or at least attempt to kill eachother. Instead they just sat there. They do have quite high rebel sentiment, but i dont think they can ever reach era 4 or defeat king's army at this rate.

4. Trade with Europe after/during war?
As i never got to the war, I do now know if this is a thing or not.

In old colonization there was a building called customs house. It allowed to sell goods to Europe for a reduced price without sending them to Europe with a ship. It also allowed for trade to continue after independence war begun.
I noticed that there might be something similar (with a 50% price reduction) in this mod and that is the warehouse extension I and II. However, I am not sure if it is working. I keep getting the message (see the picture below) that the X amount of goods are lost due to storage capacity. Maybe they were sold, but Im not sure. 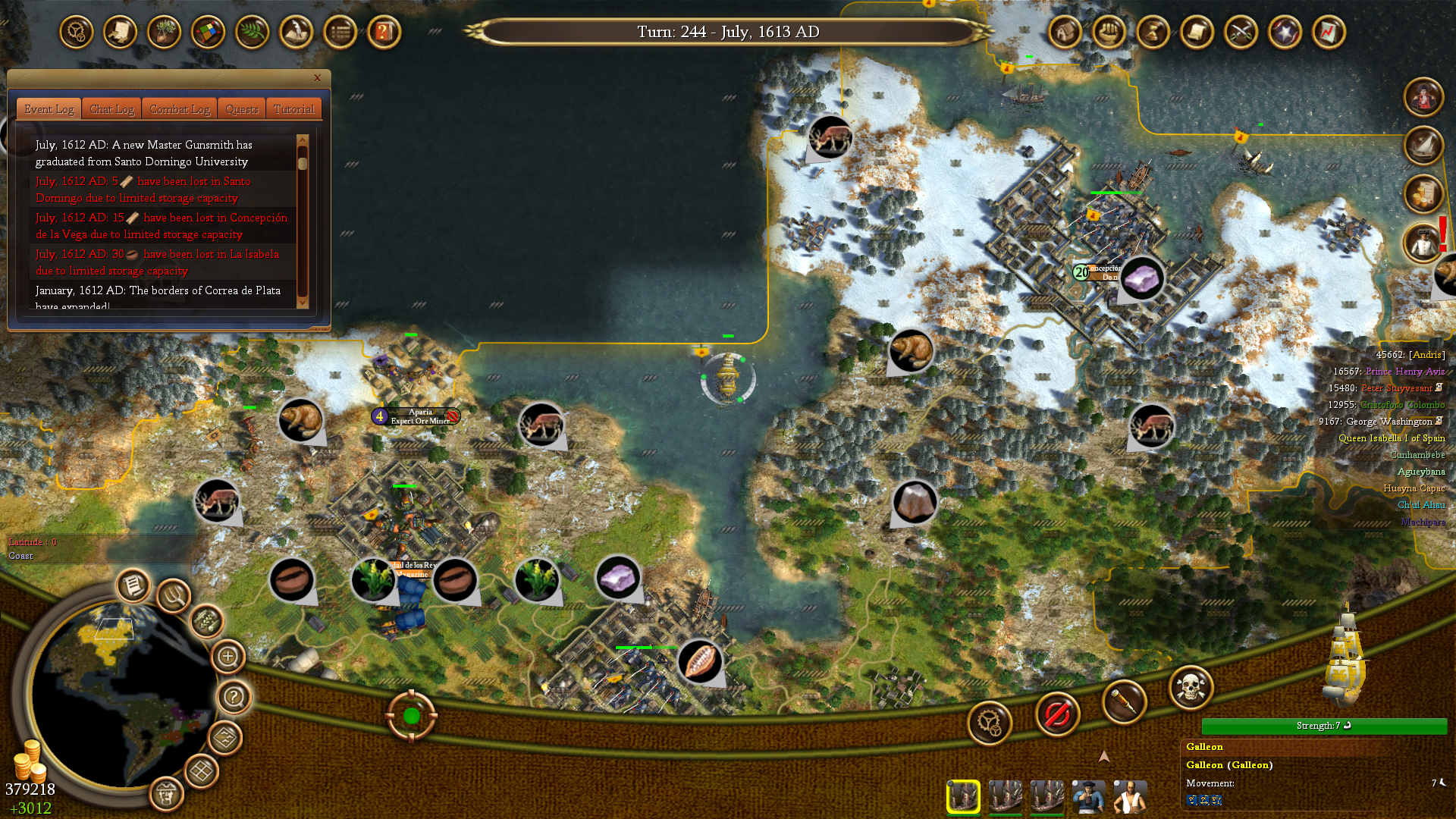 IMO some trade should be possible with Europe even after the war of independence begins. Not a historian, but I am sure that either through flying ships with other flags or through smuggling in other ways it was possible to get goods to Europe (including other countries) in warlike conditions as well. I think there was a feature in original Civ that you would trade with another European nation during/after the war of independence.

5. Random events
Maybe this is again caused by difficulity, but IMO the game should have more random events. In old colonization there were European wars, king offering you veteran troops for payment, king raising taxes, thus causing growth in rebels sentiment, Indians looting your settlements or offering gifts etc.

That is all about it, that came to my mind for now.

At the beginning of era 3 I already had strong inland production (of arms/colonists/horses) and army, which could probably take on the queen's land army. If there weren't the era 4 requirement, I would have probably attempted the war of independence in 20-30 turns after my forts and factories are finished.
Click to expand...

Currently the game, unfortunately, forces you to have very populated colonies.
Click to expand...

There should not be a requirement to get a certain amount of defenders in each colony.
Click to expand...

IMO the requirement should be based on the value of the goods sold to Europe, rather than the amount (have alternative requirements: reach X amount of value of trade with EU or X amount of goods).
Click to expand...

I would make sense to have a criteria based on the value of the good indeed. I can reduce a bit the need for this criteria.

All AI players were close to eachother in a huge map.
Click to expand...

I am a bit surprise, it depends mainly of what kind of lands they can find at the beginning of the game.

They do have quite high rebel sentiment, but i dont think they can ever reach era 4 or defeat king's army at this rate.
Click to expand...

They can't for now, you are right.

However, they can reach the new era 2 or 3 faster than human sometimes. I a bit tough to make a good AI (without cheat).

In old colonization there was a building called customs house. It allowed to sell goods to Europe for a reduced price without sending them to Europe with a ship. It also allowed for trade to continue after independence war begun.
Click to expand...

This warehouse does not sell in Europe automatically anymore. I have removed this feature long time ago.
However, you can decide when you start the independence to continue to trade with Europe (like in the vanilla version)

The difficulty should increase this aspect. However, we plan to add more events like that in the future.

Thanks again for your feedback and sorry for the delay of my answer.
Mod of Civilization IV Colonization
Dawn of a New Era

Hi, I looking forward to happen Too! especialy for:

There should not be a requirement to get a certain amount of defenders in each colony.
Agree again, I will replace the min defender by colonist by min defenders (global)

I understand why there's critics. You have a certain way to play the game... but why not just edit the criteria that you want to play the game. it's in plain text and can easely be adapted. That's what i did... Just tweaking how you like it.. Takes no more than 10 minutes.

Looking forward Doane that you keep the mod alive. Huge thanks. A+
You must log in or register to reply here.