FFHSG1 - The Perilous World Of Erebus

Alas, we're pining for the fjords.

I think we just had a crappy starting position. Out of interest, I'll pick up an early save and replay next week, getting Mysticism and KOTE earlier and running a GS to bulb towards Sorcery, building Catacomb rather than POTN. If we could have gotten to Sorcery before the attacks, we'd survive but pretty sure we wouldn't.

i'm keen to try out the spellcasting and such, but i don't mind if its in incidental smashy or part of the ruleset; i'm flexible
"Playing an SG with pholkhero is so much fun that you hardly notice that you've lost." -pigswill
"As a matter of fact, i think someone's going to help the crap out of those kids." -Hal
SGs: The Perilous World of Erebus The Persian People's Front: Crack Suicide Squad
pholkhero on Steam, xbox, epic, origin * My Youtube channel is Frankly Appalling

it's been fun reading this thread, sad to see you lose but peril was always in the name!

I think you probably just had too many civs on the map or something. That or too high a difficulty level.
I am working on a Command and Conquer tribute mod. Maybe you'll like it.

So, what's the plan? I am 100% in favour of trying again. This subforum (and the game in general) isn't so popular any more and if would be nice if the last SG thread posted here is a victory.
Should we start a new game (I love the ROTQM idea from the other thread) or try some more to salvage this one.

Regarding our last attempt, here is my post mortem analysis:

On the one hand, this was allways going to be a challenge. Our starting position wasn't that bad (although we could have used a few more production resources), and we did get lucky with some events, but the Amurites are simply too weak at the start of the game (they are a civ that shines in the late game, if it survivies until then). This is the consensus on the strategy subforum and our experience seems to validate it. We were also unlucky to spawn next to the Doviello who are (again, as per the forum consensus) one of the primary rushing civs in the game.

On the other hand, my impression of the final war is that it was actually a rather close run thing. In order to stop the Doviello invasion we basically needed 3 things: the Archery tech (+archery ranges to build archers), fortifications (walls or pallisades) in all cities, and cash to upgrade experienced warriors to into archers.
The last point we already achieved by partially building wonders (like Heron Throne) and then getting the cash payment for them when construction had to stop. Fortifications could have probably been build in the last 10-20 turns with a bit more carefull micromanagement and some strategic chopping of forests. It's the archery tech that is the real problem as I am not sure how war back do we have to go to get it on time (i.e. before the invasion starts)

Also, there were some other minor things that could have been improved (like among other things, better management of promotions - we should have gotten combat and shock on all units ASAP) but ulitmately, it was our tech level that doomed us. We were 1-2 techs away from winnig the war: Archery for breaking the enemy charge and Bronze working for counterattacks). But I just can't figure out now how to get to those techs without sacrificing some other essential thing.

(Regarding Sorcery, I'm not sure how much it would have helped). In order for the focus on magic techs to pay off we would have needed mages with fire 2 (for fireballs), and I don't know how many of those we would have gotten before the war started, especially since we can't just mass produce them).

I played from an earlier save (turn 95) and prioritised research! Went Mysticism at this time, built elder councils everywhere, popped a GS for an Academy and another for Alteration. Built warriors, workers, adepts, elder councils, markets and settlers mainly. Research went through Archery, then Sorcery which arrived on turn 300 with the Amurite empire looking like thus

I've been at war with Perpentach for 150 years. I can't attack him and he won't attack my cities and die! Mahala had eyes elsewhere and so far hasn't declared. But with Fireballs about to come off the ranks, both will be in my sights!! I've attached the save if anyone wants to play it out as well.

I also like the idea of the ROTQM, I'll start up a new thread in the next couple of days!

Still going with the continuation of this game 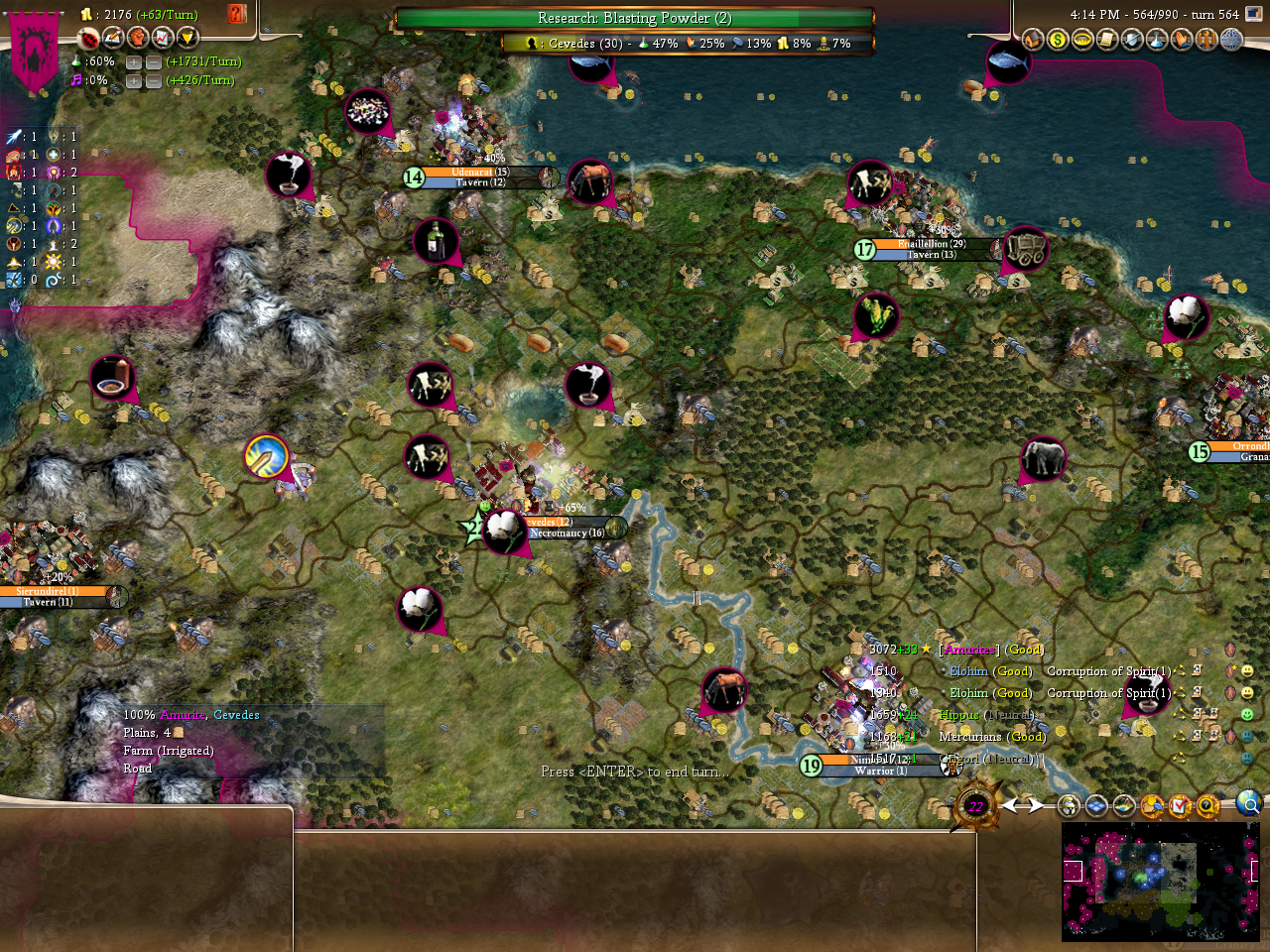