Those who have followed my lost scenarios search thread would know that I'm a big classic Final Fantasy games fan and wanted more than anything to find all the long lost Final Fantasy total conversion Civ2 scenarios talked about on Dustin Dunn's Civ2 website. So a month ago when I was contacted and offered a copy of Dustin's collection the first thing I looked for were those scenarios and sure enough they were all there, and with MORE!

I don't know if there's any other retro Final Fantasy fans here but if so then perhaps you'll enjoy this little celebration and tour of everything I found and preserved!

Naturally the first I've gotta talk about is the best one and the one I wanted the most!

Originally known as the FF2 (4) mod I've renamed to it's correct FF4 (2) title as even Americans recognize the true names these days and the wacky old Nintendo renumberings are almost forgotten about in the Western world now. For years all I had was a little screenshot from Dustins site that teased just how good it looked totally converting Civ2's terrain and units to look like the original SNES game. FF4 is one of my favourite classic FF games and tells the story of the dark knight Cecil trying to find his way back to redemption after realising he was on the wrong side of the Baron's war. So the idea of a Civ2 mod based on this game with authentic graphics just blew my mind and I wanted to find this mod so bad and sure enough now that I finally have it after all these year it is just brilliant looking. It wasn't perfect though as to my surprise there were no factions setup so you were literally just America, Egypt, Babylonians, Romans etc on a FF4 map building FF4 units lol. So I decided to go in and put in the proper FF4 factions from the game. There's only 6 kingdoms in the overworld so I added the Dwarfs from the underworld as the 7th despite the underworld not being portrayed in the mod. I also then added each kingdoms capital as the starting city and slightly adjusted Frank's starting positions to better match the original game. Now it really is the mod I'd hoped it would be and if you're a retro FF fan like me that you'll really enjoy this screenshot! 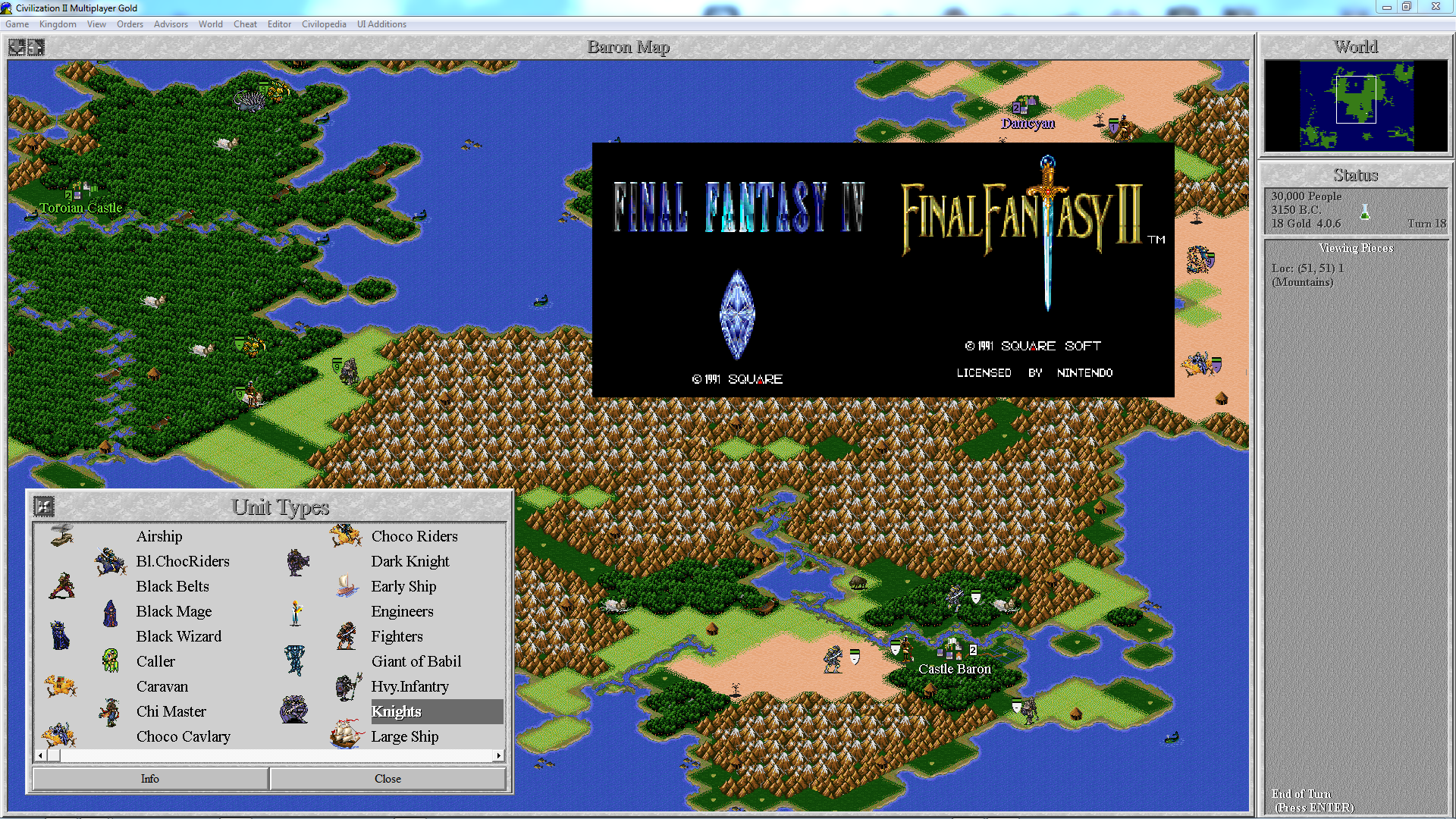 Much to my surprise, in Dustin's files was another Final Fantasy total conversion mod I had no idea about as it wasn't mentioned on the webpages in the final backups of his website before it went down! Dustin did the graphics for Franks FF4 modpack above so I guess it should be no surprise that he was inspired by his and Franks FF4 project to go on and do a lot of people's favourite retro FF game of all time, Final Fantasy 6. Dustin worked on this over 1999-2001 and by this time we had the correctly numbered Sony Playstation rereleases of the retro FF games so he actually called it the correct FF6 instead of the US SNES FF3 so I didn't have to rename this one thankfully lol!

Once again this looks super cool! But sadly he never finished it. Judging by his readme file he did release this publicly somewhere (maybe Apolyton forums?) with the hope that someone else would finish his work one day but sadly it looks like no one did. I think it's probably due to the sheer complexity of Dustin's vision in that he had full custom tech tree, faction specific unit lineups associated with those techs and lots of special events relating to the original game story, however sadly he didn't finish them and few people out there would want to try figure all that out and get it finished for him I suspect. People who follow my mod threads will know that I'm not a fan of designing big custom tech trees and usually 'lazy' my way around it with simple ones lol, so unfortunately it won't be me finishing Dustin's vision either sadly.

However all that being said I do plan to fully play through FF6 in the next couple of years as I've fully finished FF1-5 so FF6 is next! Maybe once I'm 'in the zone' and loving the game and understanding it's world, I'll be more inclined to take another look at Dustin's work and do something with it, although whatever I come up with would be simpler that Dustin's vision, that's for sure! Maybe a graphics upgrade to the old FF3 (6) scenario found around Poly & CFC could be made using Dustin's stuff.

Anyway he did get the map, the city locations and factions sorted out though and it does look quite nice! 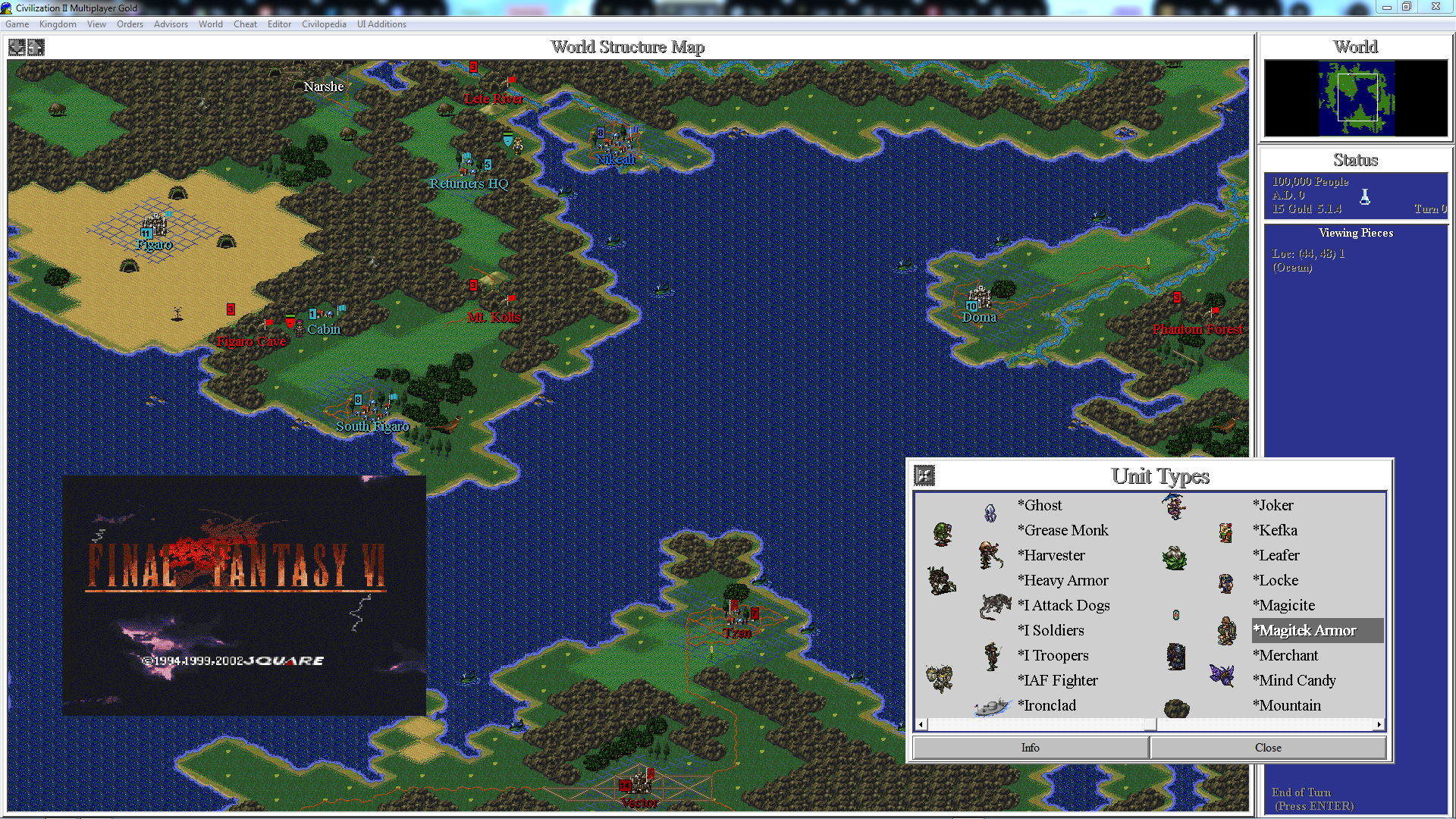 Now we're going to go really retro in that the other Final Fantasy scenario on Dustin's site that I really wanted... a NES conversion!

I don't know if like Frank, Jomb was another friend of Dustin's and therefore Dustin helped out with this but there's a familiar feel to the work so it wouldn't surprise me. Either way once again we've got a gorgeous total conversion scenario for Civ2 using authentic ripped graphics from a FF game except this time is the original Final Fantasy 1 game that started it all back in the 80s on the Nintendo Entertainment System! It's been quite a while since I played FF1 on the NES but the map appears to be an accurate recreation and has proper factions setup in their proper map locations. Interestingly instead of using the game's Monsters the Civ unit lineups are made from NPCs and town citizens found through the original game. Once again the retro world graphics look really cool in Civ2. 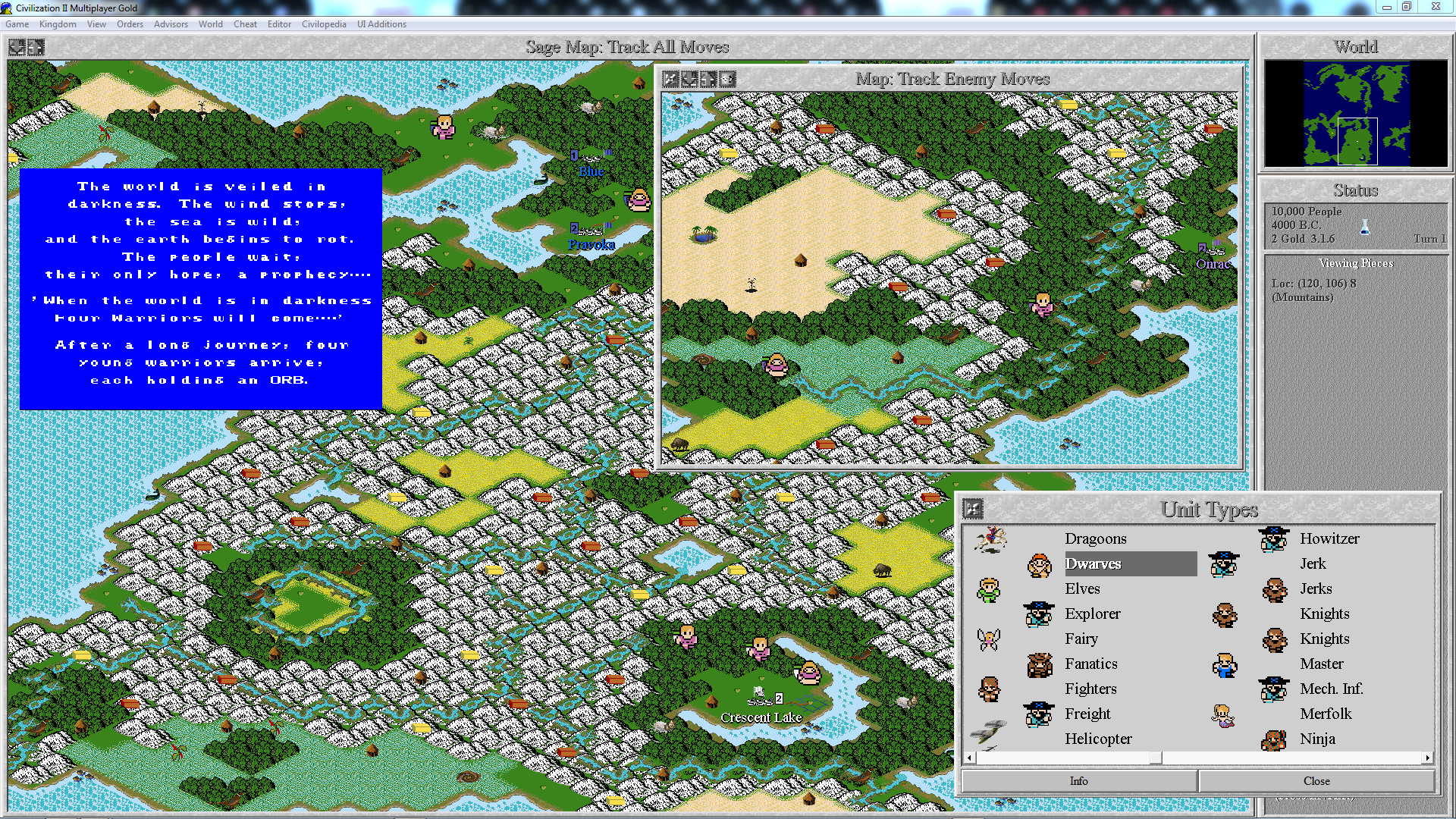 Jomb wasn't done there though as it turned out he worked on another awesome project I didn't know about based on another classic NES JRPG called Crystalis. Admittedly I've never played this one but this is super cool work! This appears to be older than his FF1 scenario but it has his familiar work of an authentic game map, factions, starting positions, and unit lineups using villagers instead of monsters. 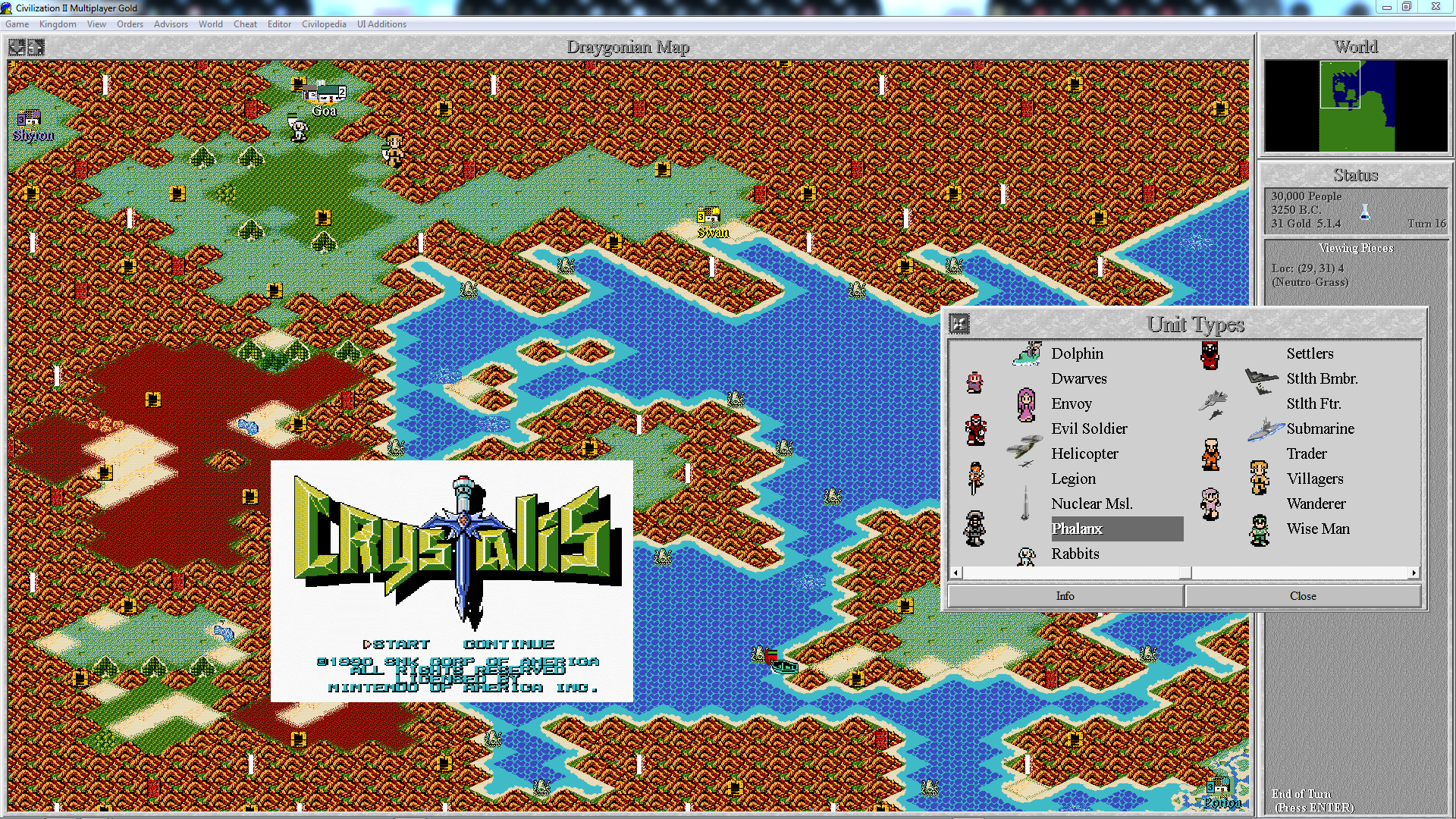 Now if all that wasn't enough it turns out that these guys had successfully ripped graphics and created unit files for even more JRPGs too. I don't know if they ever planned to make full scenarios with these but in Dustin's files I found...

A much bigger Final Fantasy 4 (2 US) unit lineup (maybe only a third of these ended up in his & Franks mod):

A much bigger Final Fantasy 6 unit lineup (maybe only a third of these ended up in his mod alpha):

A few units from what I believe were the Final Fantasy Origins remakes of FF1 (mixed with some Star Trek and Mega Man and other stuff too):

A big collection of Secret of Mana units:

And lastly a big collection of Chrono Trigger units too!

Hey Blake00. Thanks for the Final Fantasy stuff that you rescued. Wanted to let you know I just created an FF7 Civ 2 map, available here:

loccdor said:
Hey Blake00. Thanks for the Final Fantasy stuff that you rescued. Wanted to let you know I just created an FF7 Civ 2 map, available here:

Ahh cheers Loccdor (& welcome to the site)! That's really cool man! You should turn that bad boy into a full blown FF7 scenario with custom graphics one day haha, boy would that be something!