Doing the lords work hans, thanks. This is gonna help me out so much. Now I can figure out how much better each melee unit is compared to each other for a balance mod i'm considering making. Much appreciated.

The formula is great but I struggled with some of the finer points
Based on the intuitive forumula you guys have brilliantly come together I came up with a different look with the view of creating a damage guide discussing all scenarios.
I thought I would post it here first just to make sure the experts are happy. 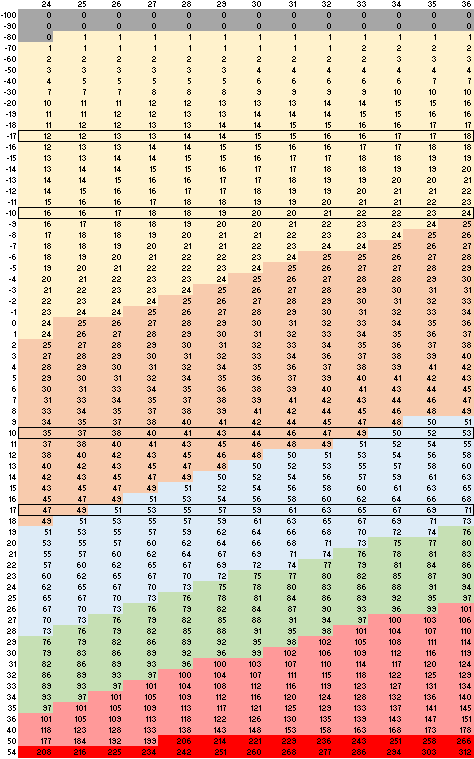 I'm little bit confused how to count the damage of the attacker and defender.
At first page there is information about the rules of thumb but I can't understand it.
What is that chart.
If someone could explain the mechanism for example
knight level1 100 hp vs crossbowman level 2 100 hp
attacker str 48 defender 30 + 4 support 2 unit.
differance is 48-34=14
I know that I can't kill the crossbowman on 1 hit
How I should count the damage of attacker and defender

Raptorous said:
How I should count the damage of attacker and defender
Click to expand...

That is cleared for me.
Thank you .

Just want to say... this thread is awesome. You guys rock.

Sometimes the game does things that just feel wrong, and I want to know why!
Last night... my Legion failed to one shot a scout. Now I know why.

Makes for a 49 strength unit. My legions were very busy so knock 2 off for a most likely sliver of damage and it's all explained. 47 vs 18 ( emperor level + wooded hill scout) and I was one single strength point shy of a 1 shot that 30 difference gives.

This all explains why I always fealt like I did it wrong if I didnt take defender of the faith as my first religion pick. That +10 really is as important as it feels. It is after all the equivalent as a free Corps. Army it up, get a spear and you'll one shot same era units that enter your borders.

Hans Lemurson said:
The best I can come up with is +10 Strength = 150% damage and resistance.
Click to expand...

Is this formula still accurate in Rise and Fall?

I am trying to express the damage formula with the values from GlobalParameters.xml. After reading this thread I believe the formula looks like this:

In the current version of the game we have the following values:
COMBAT_BASE_DAMAGE = 24
COMBAT_POWER_SCALING = 0.04
COMBAT_DAMAGE_MULTIPLIER_MINIMUM = 0.25

Code:
Also I wonder which exceptions exist for the damage calculation. E.g. how do you calculate the damage for cities with walls if it is attacked by a normal melee unit?

Edit: After reading another thread and trying it out myself I am pretty sure now that the damage of outer defenses in cities like walls is calculated as followed:

The damage to the city garrison (i.e. "the green bar") is proportional to the damage of the outer defense of the city:
CityGarrisonDamage = max( NormalDamage * (OuterDefenseDamage / OuterDefenseMaxHitpoints), 1 )

So if the city has full outer defense health, then its garrison damage will always be 1, even if the attacking unit has much more combat strength than the city.
Last edited: Aug 21, 2018
P

Hans Lemurson said:
So, I've been searching a while to see if anybody had figured out the Civ6 combat formula and, finding nothing, I took it upon myself to have fun with spreadsheets so you don't have to.
...
Say hello to my little friend here: Documents/My Games/Sid Meier's Civilization VI/Logs/CombatLog.csv

And with that, I was off to the races.
A little bit of spreadsheet manipulation and...
...
Yep, looks exponential to me.
...
I have added the CombatLog.csv file that I used as my source of data.
Click to expand...

Nice result, but how dit you get it from the data provided?
I just bumped in this discussion and I try to understand how you do it.

I'm not afraid of a little statistics nor is the notation e^x a strange one for me. As a matter of facts in daytime I regularly calculate with the square root from -1

As far as I can follow the discussion it is about a function
f(sa, sd) -> (da, dd)
or in words
"a function, given the strenght of an attacker and a defender that calculates the damage to the attacker and the defender".

The headers in the first line of CombatLog.cvs do support that idea.
But I can't see how you get this information from it.

Please let me explain what I do understand (using line one from the CombatLog by Hans Lemurson in the first message).

The way I see it:

Attacker/defender ObjType does not make sense to me, attecker/defender Type does. (assuming that it is the same information in these two fields).

Attacker/defender ID is nice to know but for calculating the damage it is not relevant, it is for assigning the damage but that is not what I'm looking for.

Attacker/defender strength is relavent but why is it negative?

Attacker/defender strength modifier, is this on top of the strength value (being only the modifier value) or is this the strength after modification (being the end result of calculating the strength).

A horseman belonging to (major Civ) 3 is attacking a scout belonging to (minor Civ) 63.
What the actual strength is of each of the two is not directly clear to me.

Clearly I completely mis some understanding of the data given.
Can somebody explain it to me?

A good night sleep can do wonders.

Now I have someting to look at.

Both random factors I find are within the +/-25% as quoted before.
This interpretation looks acceptable to me.
Is that right?

Note that the OP has not been on CFC since last summer, so it may be a while before you get a response from him.

PapaAtHome said:
A good night sleep can do wonders
Click to expand...

Yes, the columns are mis-aligned

PapaAtHome said:
This interpretation looks acceptable to me.
Click to expand...

Victoria said:
Not sure what you are now asking or are you just validating it looks acceptable to you?
Click to expand...

More or less the last bit. I'm happy with the results the way I found out now.
S

Hans Lemurson said:
So, I've been searching a while to see if anybody had figured out the Civ6 combat formula and, finding nothing, I took it upon myself to have fun with spreadsheets so you don't have to.

I have long suspected that the damage formula was Exponential in nature, given that the relative Power of units is based on their difference in strength rather than the ratio. But to actually test this I needed to gather a LOT of combat data from various unit-strength pairings in order get a large enough data set to yield believable answers. I would need to record the data from each and every combat in my game, minimizing after every battle so I could enter the data in a spreadsheet before I forgot what the message said. And do that 100 times. BOOORING!!!!.

And with that, I was off to the races.
A little bit of spreadsheet manipulation and... Yep, looks exponential to me.

Also noteworthy is the fairly large variance, but also that it appears to be directly proportional to the amount of damage dealt, flaring out like a trumpet as the damage increases. This suggests that there is a simple random multiplier to the final damage. Judging by eyeball, the upper limit seems to be 125% and the lower limit 75%.

I tried to use clean and easy to understand numbers, and I arrived at this approximate formula for what each unit does to each other in combat:

The base damage is 30, doubles every ~17 strength, and then gets a +/-(0-25)% damage bonus/penalty.
The random factor is applied to each unit independently.

I might be wrong about the magnitude of the Random Factor, and may not have gotten the exponent exactly right (and I wish I could have converted it into more intuitive numbers), but this is probably close enough to get a picture of what's going on.

For the purposes of "rules of thumb" I will make a chart for the expected damage at various intervals.

Code:
From these bonuses, we can see what we already knew: Combat strength differences are only relevant from 0-30, after that it's all 1-hit kills.
+10 is a good solid bonus where you deal 150% damage and take only 67%.

I have added the CombatLog.csv file that I used as my source of data.
Click to expand...

Thank you so much for sharing this information.

So a couple of things I thought I would just add to this venerable and revered thread.

1. @Lily_Lancer identified a cap at 200 HP attacking a city. Seems limited by garrison strength 200 but will check more
2. I think I have seem some inaccurate numbers in the past so will check some of the values for any issues. Proper validation - for example at +8 I have a value of 40 which does not match the formula.
Last edited: Oct 7, 2019
Experience , Loyalty , Chop Example & Tables , Levy units , ZOC , flanking & Support ,LOS, Rock Bands, City Combat , District Discounts , War Weariness
You must log in or register to reply here.

Wednesday at 4:38 AM
regularkid
R
S
Are you guys sure about that? (Byzantium Oligarchy)