House of the Dragon (Season 1 of GoT-related series discussion)

Gorbles said:
If I have written a story based on historical parallels, but have introduced literal mythological or fantastical elements, it ceases to became "historical" in terms of cultural norms and values. Anything that is preserved, is preserved by choice (of the author). There can be (and often are) parallels, but if we're assuming that "wights" actually means "wights" (in GoT) and isn't a poor stand-in for the Celts or the Crusades or whatever (and I believe GRRM to be too good a writer to fall into that trope; his worldbuilding seems solid). The conflict itself may be inspired by a historical conflict, but the sides have been completely recreated in-universe (in fantasy).

People complaining that others are enforcing modern morals on a fantasy book fail to realise that this is a modern(ish) book(s) written by an author who makes intentional choices when portraying his characters (and notably, GRRM has more input on HoD than apparently he did with GoT). If it's not a historically-accurate adaptation of a historically-accurate book, claims of presentism fall by the wayside, because everyone external to the writer is projecting their own personal values onto the source material. Not just the folks allegedly engaging in presentism.
Click to expand...

lymond said:
It's based on Medieval England and the Anarchy (several centuries before [jane]>Mary>Lizzy), which was basically a civil war when Empress Maude was left as sole direct heir due to The White Ship disaster. Her cousin Stephen took the throne. She technically took it back for about 8 years but was never crowned Queen, being called Lady of England instead (because, yeah, males)...then Stephen took it back again.
Click to expand...

No one in England had dragons, though. Maybe the real-world equivalent is if the royal house of England had a supply of cruise missiles that replenished gradually or something.
JESUS wants you.

I really dislike the "it's fantasy, therefore anything goes" argument. The point of a fantasy setting is to initially tell us how it differs from our world. Do it. Done.

Then the audience either accepts that conceit or doesn't. This guy came from a world with a Red Sun & our Yellow Sun gives him powers. There's a world of magic existing under our muggle noses & it has its own separate rules, but otherwise it's the same. A long time ago in a universe far, far away, some people can use the Force, but gravity works like our world. Etc. The ways this universe is different from ours is explained early on. And we either accept that or.. don't, & can check out or not.

But, once that's done, & the exceptions are explicitly laid out, the understanding is: the rest is like our world. Tides behave like we know it. Plants grow due to photosynthesis. Genetics behave like ours do.

To later go "well, it's fiction, so *anything* can happen" is a cop out. If Harry Potter had suddenly transformed into a Dragon & breathed fire onto Voldemort in the last Book that would've ruined Harry Potter. If Katniss Everdeen suddenly showed the ability to fly or teleport in Book 2 or 3, that'd be dumb. If Sarah Connor had shot laser beams out of her eyes in Terminator, it would not be the movie it is. "It's just fiction, so whatever" does not work. It kills the story.

You lay out how your fictional story is different, then you stick to "our world". All that said, I think HotD (based on GoT world-building) has done that well.

RobAnybody said:
I really dislike the "it's fantasy, therefore anything goes" argument.
Click to expand...

This isn't the argument. The argument is that it's fantasy, ergo the things the writer chooses to include, they  choose to include. This is why calling people's arguments presentism doesn't work here, because people aren't applying modern assumptions to a historical context. Because it's fantastical.

Nobody here knows exactly what level of historical parallelism GRRM chose when writing his books. We don't know what's in because "that's the way his world is" vs. "what he thought would make for engaging characters and therefore stories". We don't know how deep the worldbuilding goes (I'd like to assume pretty deep).

We're not judging a historical work here (heck, there's no judgement, just speculation on the setting). We're discussing a modern work that leans on a fictional historical context.

And arguments to absurdity like comparing that discussion to teleporting humans in a setting where that doesn't happen are honestly silly. aelf's original comment was with regards to the disposition of royals and their subjects in-universe. Hardly an absurd topic for something like HotD.
Last edited: Sep 23, 2022
My blog! (updated 04/11/21: A bit of a refresh)

HotD is moving fast; it already got to season 8 of GoT territory 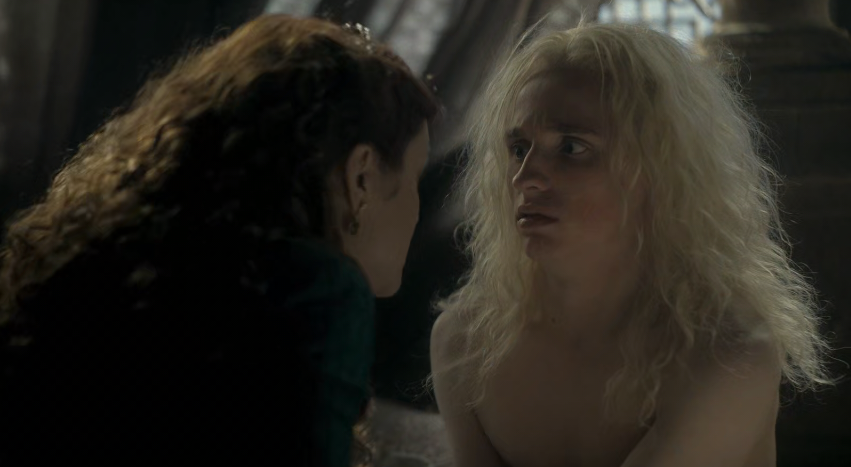 The show's honestly pretty good. Perhaps not GOT season 2-3-4 good but still pretty good. The main difference is of course that unlike in GOT there's (for now) a power that is unrivaled and legitimate : Viserys, whatever his flaws. It means that mistakes are usually only lethal if Viserys desires it, and that's not his style.
They're setting things up so that his death will break everything, and they're doing it rather well.
Violence is the last refuge of the incompetent. I. Asimov

@AdrienIer You are spot on. The storytelling is coming along nicely as the new folks get introduced and aged.

Spoiler General :
]They have to cover 20 years from the start to Viscerys' death and have all the grandkids in place and old enough to fly dragons and wage war. GRRM probably would have taken 1000 pages or more to get us this far.
"Often it is better to be approximately correct than precisely wrong."

I'm still enjoying this far more than I expected, although the casting changes are taking me a while to get used to, particularly Rhaenyra. Milly Alcott had such unique features it's just hard to imagine her "growing up to be" Emma D'Arcy. On the other hand, Alicent was so spot on I could barely tell it was a new actress.

I'm definitely ready to get the plot moving ahead though. If it was all about getting us to here (or maybe even further into the future?) so stuff can finally happen, I'm not sure why we needed to spend so much time setting everything up - in GoT we didn't start with Robert's Rebellion & jump ahead years at a time to get to Episode 1, we just... started there, & characters filled us in on the history. As much as I've enjoyed the show so far, that conversation between Rhaenyra & Alicent could've pretty much got me caught up if I started watching this episode.

Also, as I was referencing in a post up above, it's often very important that anything not explicitly called out as being different functions like our world does. An important plot point in both this episode & in season 1 of GoT hinges upon genetics functioning like it does in our world. If they had played fast & loose with genetics before now, that would undermine these very important story elements where genetics comes into play, even if the characters don't know enough to call it that or precisely how it works.

I like the casting changes, especially Rhaenyra.
"Often it is better to be approximately correct than precisely wrong."

Went a lot smoother than expected. Alicent was really good.
Since discovering Civ3 I have discovered food, sleep, and work to be largely optional.

RobAnybody said:
On the other hand, Alicent was so spot on I could barely tell it was a new actress.
Click to expand...

Were you watching the episodes on mute, or with dubbing from another language? I cannot imagine you could have any difficulty telling it was a new actress if you listened to anything she said, as Olivia Cooke and Emily Carey spoke with radically different accents. I'm thinking Olivia Cooke is a better performer but the character she is playing seems so different that it is rather jarring.
Economic Left/Right: -1.38
Social Libertarian/Authoritarian: -7.49

You may download the installer here or the archive here.

My comments were based on how much the aged-up actors looked like their younger counterparts, which I would have been happy to clarify, so... I guess, to be polite: 1) no, I was not watching on mute, 2) no, I did not have dubbing in another language active. Thank you for your so politely expressed concern about my viewing habits though.

MagisterCultuum said:
I'm thinking Olivia Cooke is a better performer but the character she is playing seems so different that it is rather jarring.
Click to expand...

I'm pretty sure that the new ladies will grow into their roles as their story unfolds. IIRC I read that this last episode was actually the very first one filmed.
"Often it is better to be approximately correct than precisely wrong."

Another great episode! Lots of cool stuff happens.
"Often it is better to be approximately correct than precisely wrong."

Good episode.
Since discovering Civ3 I have discovered food, sleep, and work to be largely optional.

The very ending was pleasant, at least, although

Spoiler :
some lowborn had to be burned (alive or dead) for that to happen

I guess there's always a butcher's boy.
"A life without festivity is a long road without an inn"
Demokritos of Abdera

Good episode but much too dark. I mostly mean that it looked like D&D were in charge of lighting the nighttime scenes so I could barely see what was going on much of the time with my laptop screen, but metaphorically it could have used more levity from a bit of comic relief too. This show really needs more Mushroom, the dwarf jester from the book.
Economic Left/Right: -1.38
Social Libertarian/Authoritarian: -7.49

You may download the installer here or the archive here.

MagisterCultuum said:
Good episode but much too dark. I mostly mean that it looked like D&D were in charge of lighting the nighttime scenes so I could barely see what was going on much of the time with my laptop screen, but metaphorically it could have used more levity from a bit of comic relief too. This show really needs more Mushroom, the dwarf jester from the book.
Click to expand...

Yes, the lighting in outside scenes was non-existent. Did they mean it to look like no artificial light was used? (that was just difficult on the viewer's eyes).

Can't say I am a fan of the "years pass between each episode" format either. From the trailer of ep 8 it appears that all (?) the child actors are gone again, replaced with others.

Shades of the Sun

The show is getting better after a very slow start. Fast forwarding 10 years and changing the actors has done the trick, for me at least.
"I WIN!... I always win... Is there no one on this planet to even challenge me?!?" - General Zod
You must log in or register to reply here.

History of the Scenario League & their backups