The Humble Bundle has made a Sid Meier Bundle, containing a lot of our favourite games!
If you pay at least 13.25€, you get
As other minor games included are the early games of Sid, Sid Meier's Pirates, Sid Meier's Railroads, Covert Action and the remakes of Ace Patrol, Sid Meier's Ace Control and Ace Control: Pacific Skies.
All keys are available via Steam for Windows, some are available for Mac and Linux.
Any donations coming from this Humble Bundle go to Trees, Water, People, a charity which has started by planting trees, but is now doing a lot more. The recommended price for this Humble Bundle is 25€, and we can't say this would be too much for all these games, it's rather too little for all the play time you get out of it.

The Humble Bundle has made a Sid Meier Bundle, containing a lot of our favourite games!
If you pay at least 13.25€, you get

You don't get the NFP, but instead you get a coupon for a 15 dollar discount for the NFP.

Because we are the best fans in gaming (according to Sid himself), we have taken up the challenge and conquered some spots in the current leaderboard for this Humble Bundle: 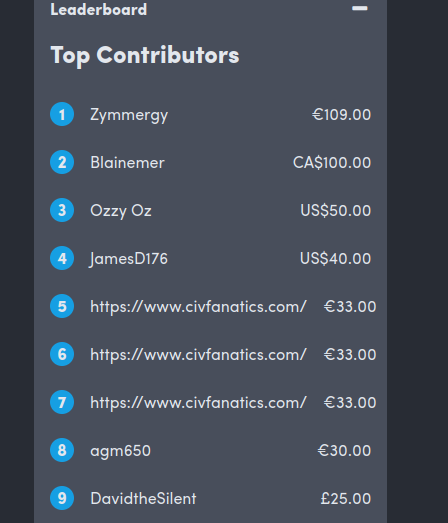 We dare everyone to show us that they are even better fans, and push us of the leaderboard! You have 1 week to beat us!
Civ4-BtS-Mod "Mars, Now!"​
BtS: 18 Civs on a world map - and your choice, which!

Humble Bundle: Get Civ6, the XCOM titles, Railroad Tycoon titles, and more, for 15.98€