[BTS] I want to improve my early game with your advices

Master_Of_Ideas said:
How would you play Huayna ?
Click to expand...

Take a look at his unique unit, which you can build on turn 0. You can start by building those, working high hammer tiles (like a 3H one and settling on PH, for 5H), look for a neighbour > kill the neighbour. Do that again. Congratulations. You now have 3 capitals, and it's turn 30 or something.

Master_Of_Ideas said:
I am a bit astonished, that monarch is becoming so easy actually
Click to expand...

Keep in mind you are playing with the by far best leader in the game. That aside, there really isn't that big of a difference between the difficulties up to Immortal. The step from Immortal to Deity, however, is gigantic. Once you have a good grasp of many of the basics, and are good with microing cities, you can probably tackle Immortal rather well. You can try a more normal leader on Emperor first if you want, but otherwise you can also step up and try your hand there.

Civ Illustrated: A guide to the AIs in the game.​
M

Mh... well, it seems that I struggle a bit with expanding.

I took the hint at heart settling more aggressive and founded the 6th city right before currency. Now this is the global situation: 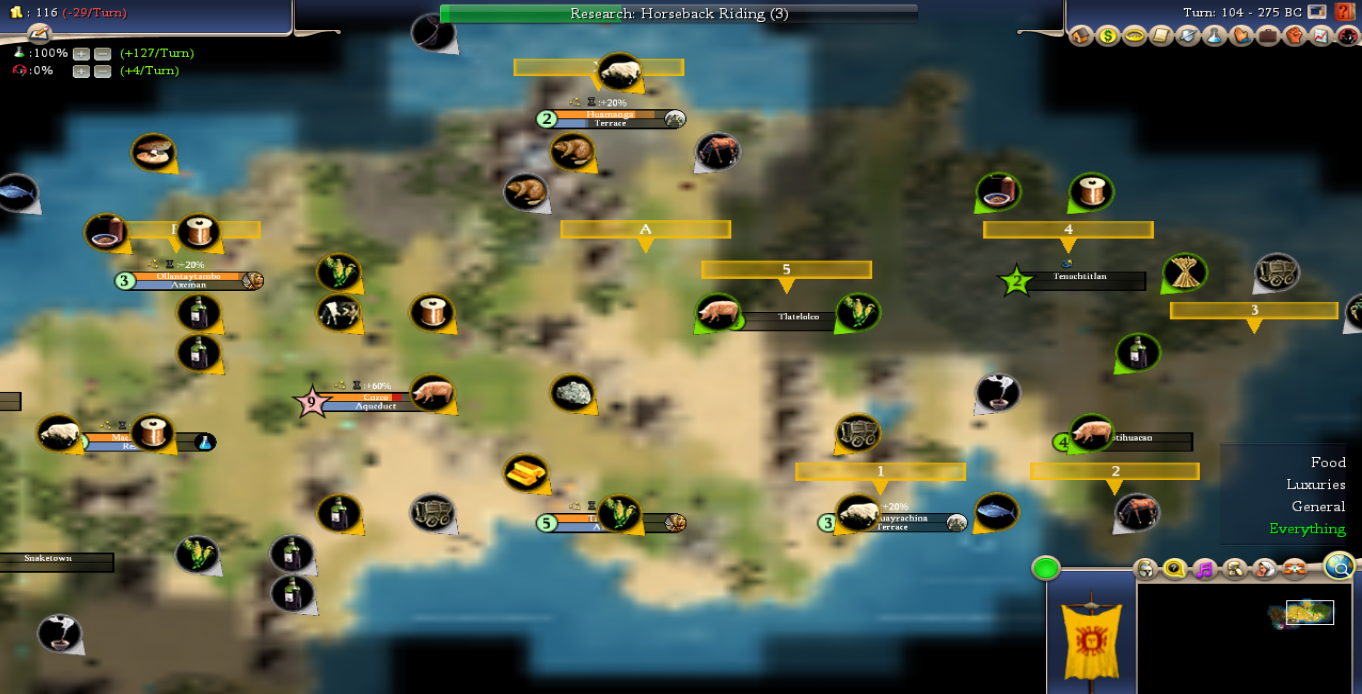 Eastern area:
(Montezuma, the numbers indicate, which citys I want to keep and where I plan to settle. I will raze his southern city)

1) Would you settle in a similar way?
2) Would you settle a 7th city at Spot A? Could that provoke Monte to declare war even when he is in a lost position?
3) How does Monte will react in this situation, when back in tech, with neighbor who declared war and without border tensions?
4) How can I make the war easier to win? The first approach was expensive and brought more costs than it gave...

War situation:
I took back open borders soon after I scouted his resources and declared war when there was a possibility to take a worker (only caesar disliked that), provoking him to send some troops. He lost 1 axemen, 2 archer and the worker, and after that came to peace with 1g/turn and 30g directly. Meanwhile I built up my cities and teched construction. When the second war begins, I kick him off with war elephants and catas.

His techs are far behind mine, he not even has writing.

It's great to have 3 copper sources. This way we can get even some things like that:

After THAT I will switch to get HBR as soon as possible. This way we can get rid of Monte. 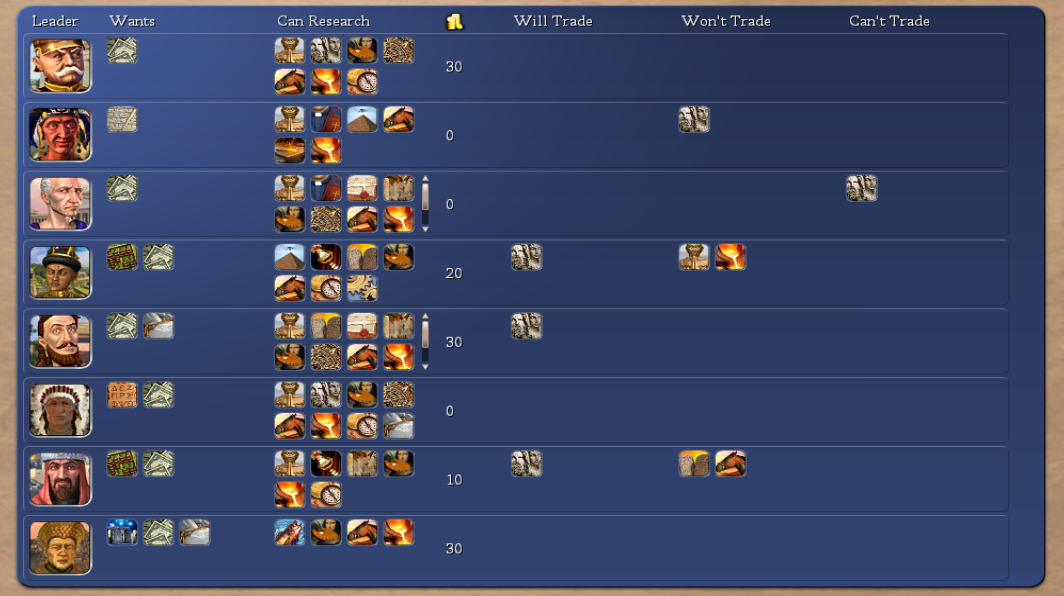 Master_Of_Ideas said:
I will raze his southern city
Click to expand...

Why do you want to raze a rather excellent size 4 city? If there is sea food to the south, you can always put a city on top of the horse.

Everybody look very backwards, so you probably have this game in the bag already. Monty doesn't even have IW!

Ele-pults will completely overwhelm them.

I tried to load the savegame, but there is a brief message and then the game crashes to desktop. Maybe you use a mod I don't have?

Civ Illustrated: A guide to the AIs in the game.​

Worrying about what will provoke Monty to declare war is kinda meaningless, dude's crazy enough to declare war in any case anyway. Peace is not an option when Monty is on the board, you see Monty and you prepare for war.

A bit of advice (not on your game play here but on shadow games in General).

In a shadow game you go very slow, first 50-100 turns you would only play a few turns (4-5 turns or when a decision needs to be made),and then give everyboy 1-2 days time to giev feedback :- and in the middle game if your in the middle of a war or a golden age you may want feedback every 2-3 turns.

So what I did when I did my shadow game was also play a couple of other games in the background while the shadow game was going on. In this way I was able to go slow and get a lot of feedback on the shadow game, while still getting a civ fix. Of course now I took a break for 6 months and have forgotten some stuff, and having to relearn, but going back to the shadow game helped.

This is the game I did, have a look in terms of the pace of the game (ie look at the time in between my posts to allow for feedback etc), and this will get you best use of the advice of people.

Looking at what you have learned so far I would recommend a Emperor \ Immortal shadow game ( I think your beyond Monarch now). Use a mid range leader like Napolean / go for a standard pangea map (or continents), standard size NH\NE of course.

But make sure you finish it. My game took over a month but I learned loads including how best to run a Golden age (and how to prepare for it), how to execute a Cuirs rush, barb management in early game. But this is the best way to learn, but you have to take it slow

Oh and make sure you apply the feedback

....I think I made Lymond and Coanda tear our their hair at times when I forgot to micro manage,or build useless improvements, or wasted worker turns etc

On plus side your limited number of cities here is helped by limited amount of land. 18 AI for 2000 or so land is not much.

You lack ambition or plan here. You went construction but your not building an army.I can see you are building 1-2 axes slow time.

Your biggest issue is you only have 2 terraces. These are the best building in game.Why would you not chop/whip these in cities asap once you have a few cities. Problem is you built SH. Axes do not come before terraces. WB maybe to help growth if you have fish.

Huge map when you are learning map is bad idea. I rarely play Incans as they feel so over powered.
Last edited: Oct 29, 2021
My love for you civ 4 burns like a dying phoenix

With that start. Corn, pigs and the cows I think you could be producing settlers in 7 or so turns once all 3 are improved. With a worker in 4 turns.
So AH first. Then Mining/ BW for corn gold city. Not sure how important BW is untill you have something worth whipping. I figure if you push come 2000bc you could have 4 cities after 1-2 chops. Main issue might be fogbusting to secure city sites. 2nd worker after first settler could have some value with extra chops.

Then a case of deciding writing/pottery vs masonry. I really doubt any need to rush masonry. With so much forest each chop is worth 50H. Fail gold on SH could of been nice.

You could of settled a gold/pigs/stone site but not sure it's worth it. Better to whip monument or terrace. Losing the coastal tiles would be annoying. Same for stone/desertpig. I think just accept the monument whip in second city.

Once you have 4-5 cities you could probably just axe rush Monty. Looks an easy target. Wait till each city has a terrace first.

Really think you killed your start here by deciding to stay at 2 cities by 1400bc. That is delaying 3rd city by almost 1000 years. You built SH to speed up monument that could of simply been whipped at size 2. Settlers were so much better with such a food strong capital.

I recently tested the virtue of using Incans just to wonder spam. Every decision I came against suggested it was a bad idea. Be it settling cities or tech choices to speed up wonders. Playing religious on Civ 4 really sets you back so much here.

I think if you did the above you would see how quickly you could of expanded here.
My love for you civ 4 burns like a dying phoenix

2000bc. 3 cities with settler in capital for copper city east of capital. New city grabbed the pigs and capital took the copper. Stone city whipped monument.just before gold was ready.

Far from perfect but 625bc.
Mids built 1120bc.
9 cities with settler in place for city number 10. Another whipped lined up in gold city for further settler.
8 of 9 cities have terraces. (2 out of 6 cities had them by 325bc on your save.) Why would you not build the best building in the game for growth? (Will have double your number of cities by 325bc)

Aztecs are gone. Captured Aztec city had a terrace pretty much turn it came out of rebellion due to 2 pre chops.. Used about 10-11 units on Aztec capital. Had 3 defenders but 60% cultural defences. Aztec had copper but hadn't built the mine. Other 2 cities 1 defender. Captured 2 workers. I could of used the UU but that felt like cheating on an axe rush. I had 3 or so uu in stack.

Not much here to really play on for as I have so much land now and when cottages kick in I will be way ahead on science. I can still whip 1-2 more settlers. Settled clams city with no food but 1 chop got me to point where I could whip terrace. Cottaged grassland so not too big a wait.

Got about 100 fail gold from Stone Henge.

Building Aqueduct for Hanging Gardens. Should be great with 12-13 cities.

Key strengths here:
Over powered Unique Unit (UU)
Replacement granary that gives you 2 culture a turn. Which is 30H cheaper than a library for 2 culture a turn.
Financial trait with rivers and gold. Bonus commerce is huge.
Sooo much forest too. I chopped 7 forest each adding 50H a chop to mids. If I had got maths sooner that would of been much higher.
Aztec capital is surrounded by forest.

This is why you don't wonder spam on 2 cities. As land and food are king on civ 4. If you sit on a small amount of land you get punished on higher levels unless you are planning to take down a neighbour AI.

Played to 225bc just so you had a comparison.

Spammed cities. Built 4 more cities.
Completed Hanging gardens. All 13 cities +1 pop. Capital size 13! Which is okay for this date. Next biggest AI has 7 cities.
Started on MM wonder. Albeit it's a V slow build.
What I have pretty much ignored is diplomcy and espionage.
Traded for IW and alphabet this turn. at 100% science just over 200 beakers a turn. I needed alphabet as cities were starting to run out of useful builds Really didn't want to give away Calendar.
I still lack any great people but the next will likely be used on a golden age.
I whipped a workboat in error. Ooops. Wanted Terrace first!
Not completing Moai Statutes. It was for fail gold.

Held back from war mode. Could go phants now I have ivory. That would of taken down 1-2 AI. I suspect axes would be enough with pults.

At this point I will stop as with 18 Ai this game could take hours.

Last edited: Oct 30, 2021
My love for you civ 4 burns like a dying phoenix
You must log in or register to reply here.

I Want to Assassinate My Own Spy Specialists
2

I always screw it up at the mid game... (Monarch)

P
Why does the AI refuse to make the trade I want?