[IMPORTANT] For all Steam Users: Follow these instructions to play WTP without bugs

today we noticed again, that some players have not yet heard about the issues in latest Steam version of Civ4Col.
(It is common knowledge in the modding scene but we understand that new players might not know that.)

In the latest Steam version (released years ago) GameSpy was removed for Multiplayer.
They also changed something considering mods. - We have no idea why since 2K / Firaxis never answered to that.

In previous releases those bugs with that Steam version may have been minor or rare. (Unless you played MP games.)
Due to the fundamental changes in new release those bugs will be major and certain. (Also in Single Player.)

Go to your Steam client, and switch back to "Original Release Version" - even if Steam says it is "unsupported".
(Simply ignore that "unsupported", it has absolutely no implication. It is in fact the best version available on Steam.) 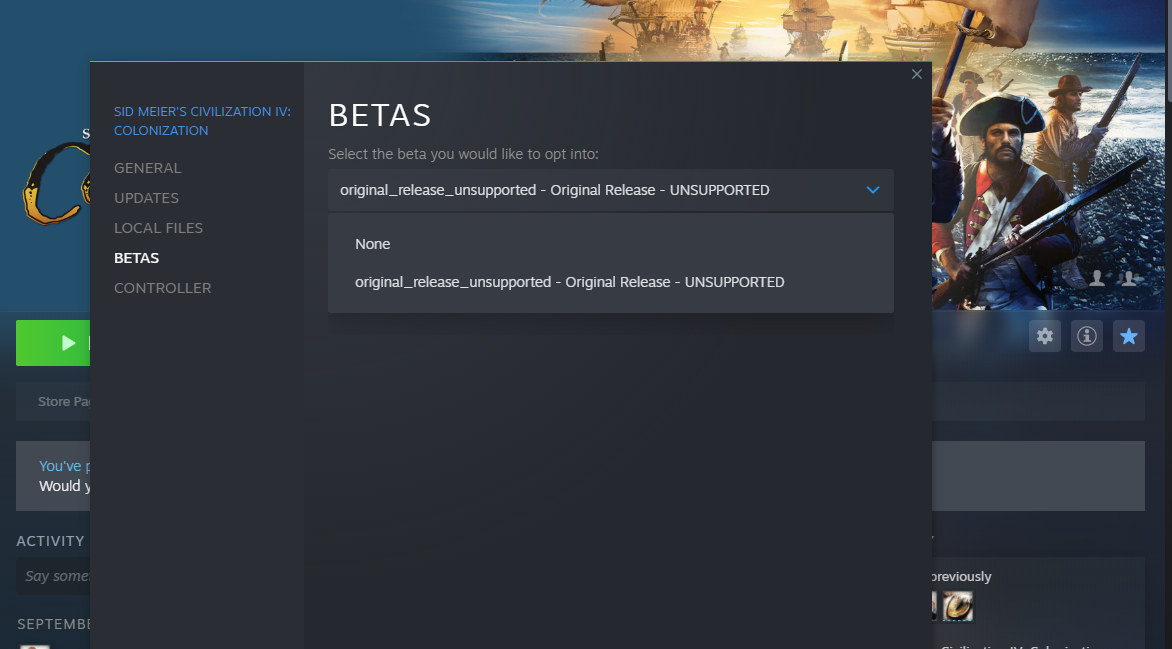 If you want to help us prevent bugs, please tell everybody you know playing Civ4Col Steam version.

@Birdjaguar
Can you please make this thread sticky?
This has really caused us many issues and we would like to prevent this from now on.
Thanks in advance.
Last edited: Dec 24, 2021

I have both Steam version, and non-Steam DVD version + official 1.01f patch. Is it OK to just use the patched DVD version instead of messing with Steam?

nci said:
Is it OK to just use the patched DVD version instead of messing with Steam?
Click to expand...

It is the same.
Thus yes.

Simply do not use "Latest bugged version" in Steam.
Everything else should be good.
Last edited: Dec 24, 2021

raystuttgart said:
In the latest Steam version (released years ago) GameSpy was removed for Multiplayer.
Steam also changed something considering mods. - We have no idea why since Steam never answered to that.
Click to expand...

A bit nitpicking, but Valve has nothing to do with this. It's a store and they release whatever the developer/publisher decides. This means it's a decision made at 2K (publisher) or Firaxis (developer). Also yes they haven't told us why they did as they did.

Their announcement was that Gamespy died and they replaced the Gamespy multiplayer option with some steam multiplayer. Why the touched mod support and removed the ability to play multiplayer with Direct IP connection is unknown. It is also unknown why they updated the steam version and not the GOG version.

Versions of colonization we support:
Multiplayer across any supported version should work just fine.
We the People mod for Colonization

we (me and my friends) did as it was said in this post, and now there is no way to play multiplayer. when trying to connect (direct ip connection using hamachi), this error appears.
when you try to play through the "Internet games", a window for entering the "game spy" appears, but it does not work and there is no opportunity to play. 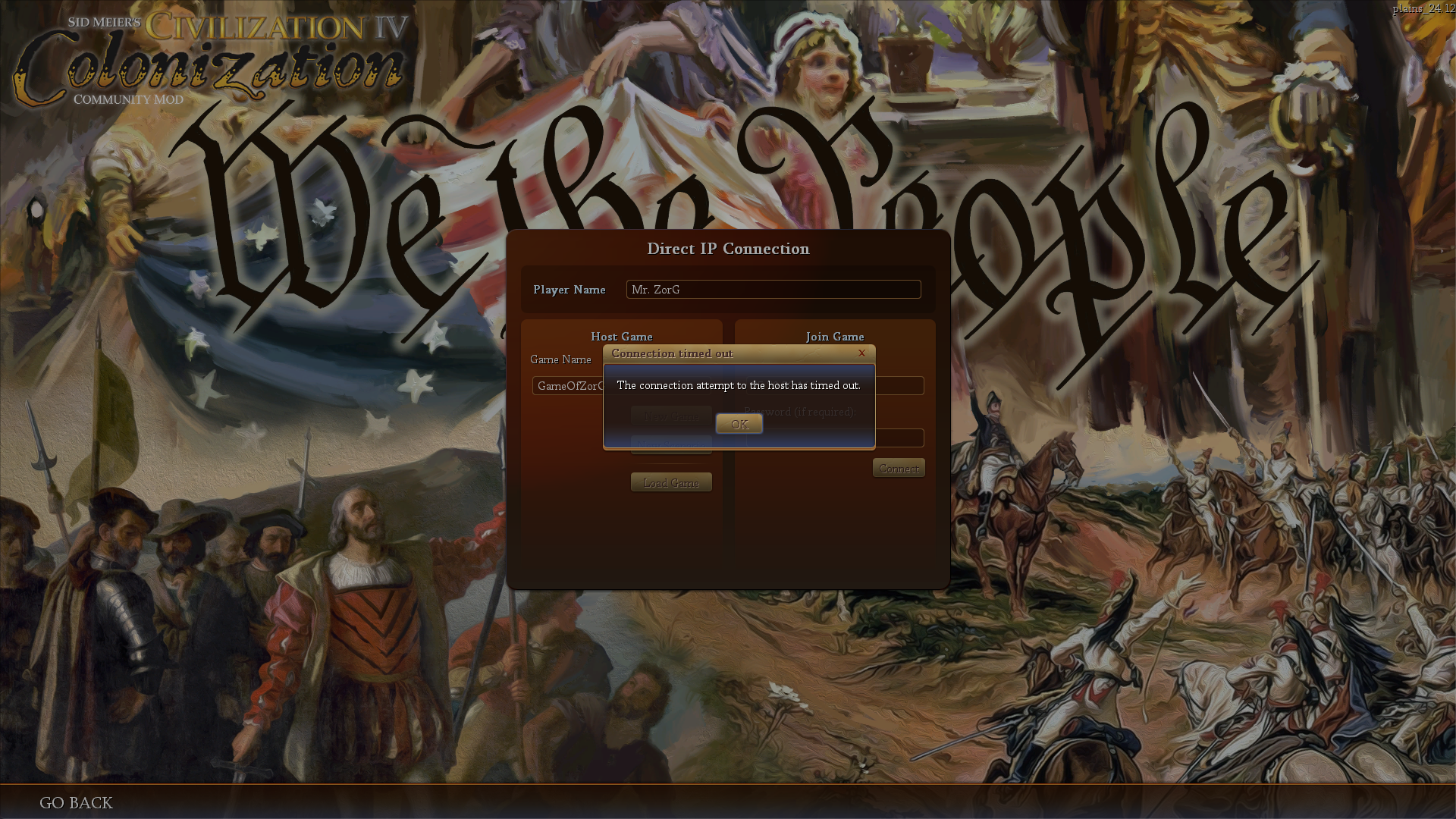 update: with the help of hamachi we connected, but at first they could not. because of what - it is not clear.

Mr. ZorG said:
update: with the help of hamachi we connected
Click to expand...

I also do not know more than hamachi being the solution.

(I also just heard it from other people and have no experience of my own with it.)

I understand correctly that some Steam servers are used in the "Steam version", and in the "original version" only the "game spy" servers?
R

This would be an big drawback for the "original version" - as fiddlyng with hamachi or related software is a mess ......

R_TEAM said:
This would be an big drawback for the "original version" ...
Click to expand...

Yes but again, it is the only version that works correctly with mods.
If you do not use it you will have noticable bugs in WTP for sure in next release.

So you have 2 choices in the future:

We modders can not change that.

Only Firaxis / 2K could change that.
But most likely our small mod is not important enough.

Sorry if this is out of place, But...Is the latest version of WTP here on civfanatics? I have the original dvd and do not use Steam for Colonization. The WTP version I have been playing is 2.7.1.1 upgrade.

Where do I find the downloads for WTP at anymore?

And Thanks for the Mod too!

"If I've hurt your feelings with my response that's just how I am, frank and blunt and... Old and Slow and down right Cranky at times......Watch Out!! It's Not Y'UNs Turn!!!."

JosEPh_II said:
Sorry if this is out of place, But...Is the latest version of WTP here on civfanatics? I have the original dvd and do not use Steam for Colonization. The WTP version I have been playing is 2.7.1.1 upgrade.

Where do I find the downloads for WTP at anymore?

And Thanks for the Mod too!

Thank you very much.
"If I've hurt your feelings with my response that's just how I am, frank and blunt and... Old and Slow and down right Cranky at times......Watch Out!! It's Not Y'UNs Turn!!!."

Wow... I played for years and if I knew this once, I have long since forgotten!

Edit: Might it be a good idea to put this info somewhere in the Mod Overview? Since that's where most people go to find the release I think.

I had no problems with the NON-beta Version on steam (I play no MP anyway), but I followed today the advice to use the "original" version (in steam terms "unsupported).
Now while the game starts fine INSIDE steam OR a shortcut using the "rungameid", it won't start for me with the fresh colonization.exe nor the directly made shortcut anymore, even not after restarting the system etc.

I normally start col directly with the mod enabled in the CivilizationIV.ini

It works fine diectly inside the steam app or the rungameid-Shortcut, but it won't work witht the exe or the direct shortcut to the gamefolder with the colonization.exe.

I checked this after installing the "original release, the date of file was new from today, but my MOD folder is like before.

As there is here an advice to us the "original release" I give this a try an don't go back to steams last "bugged" version.

PS: I also have the GOG version installed, no problems here.

the rungameid shortcut seems to use this SCRIPT to run the game, so maybe that's the point, why running the exe directly will not work anymore
1680_install.vdf

OMG I just discovered this thread today. All this time I was using the wrong game version... it's so not intuitive (from a player perspective) to use a beta version and especially one with "UNSUPPORTED" written in capitals letters ^^
This warning should be sticked, written everywhere Idk, so important and also so easy to miss.
That said, I don't feel like I've endured so many bugs, it was fine.
FRENCH GUIDE for CIV V mods installation SP & MP
https://mega.nz/file/46BlkIYI#qNzVYpE-GZwL3Oc2dC3CmgqpTqsnKn8dNCX_I8kIPTg
A

Thank you for the info !

Maybe the Readme.txt should be updated. It says : "If you have the Steam version, you are automatically up to date and don't need to do anything."

So despite my habits to use the original release version for civ4, I assumed it was ok with the steam version for col, and I just stumble upon this post while searching for other info just before starting my first game !

A0Zmat said:
Maybe the Readme.txt should be updated.
Click to expand...

The Read Me English text as it applies to Steam is now updated for Plains and Release_candidate_3.0.2. I can update Master if that will change the 3.0.1 release.

Kendon said:
The Read Me English text as it applies to Steam is now updated for Plains and Release_candidate_3.0.2.
Click to expand...

The more thorough description of how to install and open the mod is now in Readme_WTP_english in Master, and in Plains as well just for good measure.

Bumping this again because we had another bug-report related to this.
(Just following this guide automatically solved the bug for the player.)

Again, in upcoming releases you will have bugs for sure if you have Steam version and do / did not follow this guide.
You must select the "Original Release version" even if Steam claims that it is unsupported.

If you use GOG version or the CD / DVD version, there is nothing to worry about.

So if you use Steam version of Civ4Col and want to play our mod WTP please follow this guide.

(Otherwise consider yourself lucky if you got the game from GOG or still have the old CD / DVD version.)
Last edited: Aug 7, 2022

[IMPORTANT] For all Steam Users: Tips for Playing MP games with WTP in Steam