Allows up to 10 icons to be shown for each tech. Requires EUI 1.28g, as included with VP.

Important Note: For many years, there have been reports of crashes when opening the tech tree. One theory is that this is a memory issue related to the large number of icons on the screen If this theory is correct then this mod will only make matters worse. On the other hand, this mod ignores many events that trigger an update, which may improve things. I have played 10 civ/20 CS/large games with this mod for over a year without a single crash, but if you play bigger games or with other memory-hungry mods, then this mod may make matters worse. Incidentally, if you ever get a reproducible crash opening the tech tree please report it on github so one of the developers can investigate!

Compatible with 2.7 and any earlier versions from the past 5 years! Compatible with 3.0 but currently the cosmetic improvements to the tech tree in that version will be lost.

Additional Features and Options:
- Ignores irrelevant requests to update the screen - tiny performance increase and may help with crashes
- Bug fix for dimming of built World Wonders not updating when new ones built
- Option to show the number of met civs who have discovered each tech (see showDiscoveredBy)
- Option to show total turns to research each tech when a queue is active (see showTotalTurns)

Currently, activating options requires editing TechTree.lua and changing the relevant variable to true (false by default).
Last edited: Nov 26, 2022
Steam: You've played for 10302.5 hours. Would you recommend this game to other players? Me: Maybe Later. 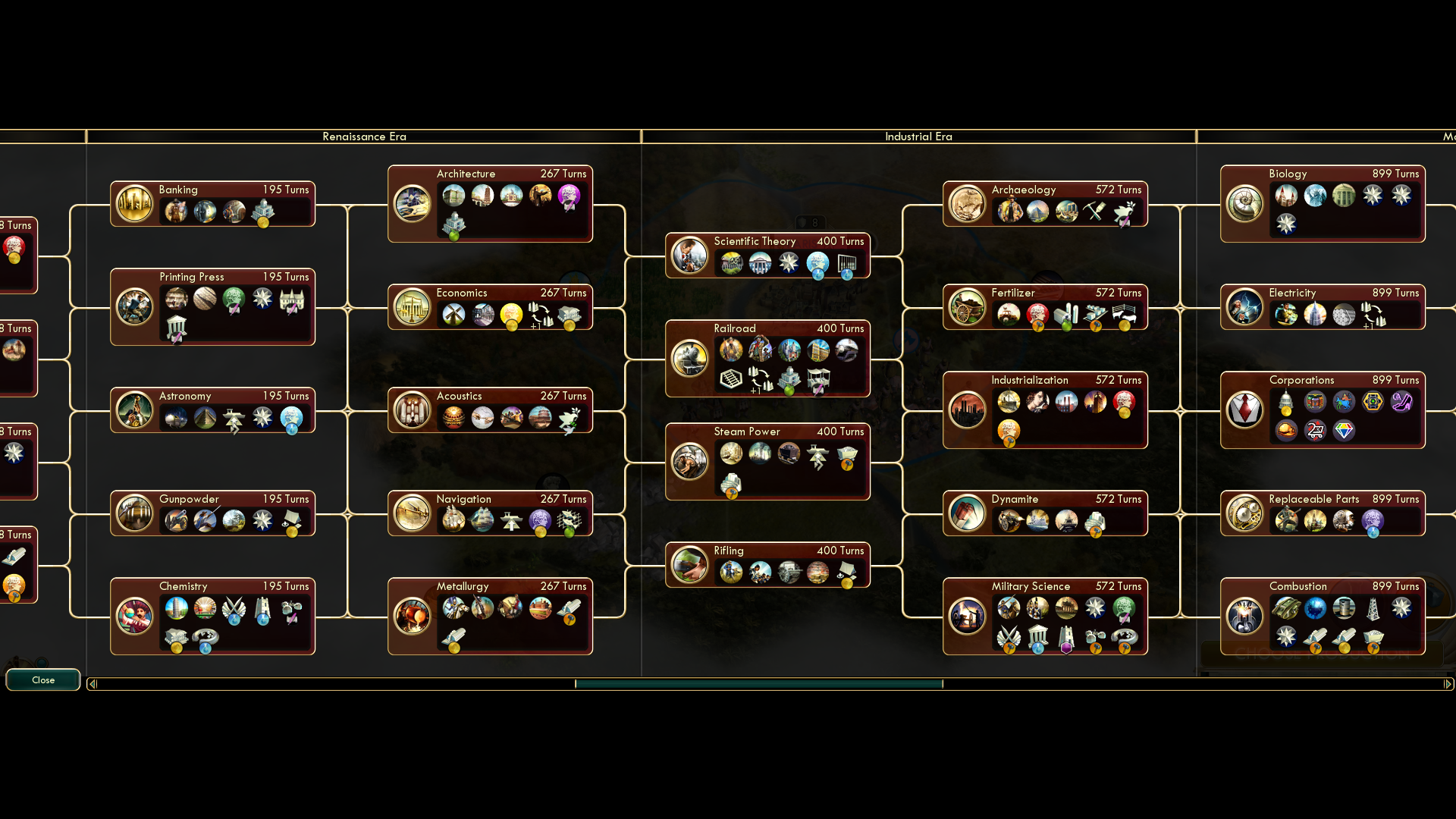 Steam: You've played for 10302.5 hours. Would you recommend this game to other players? Me: Maybe Later.

Updated original post with information on Additional Features and Options.

The option to show the number of met civs who have discovered each tech puts a big red number on the tech icon. You can always work this out from the tech cost, and since I was spending time doing so, I decided to simply display the information instead. Some may consider this a cheat - if so, please ignore the option. If this option proves popular, the display method could use some improvement

The option to show total turns to research each tech when a queue is active was very useful for planning the end game in vanilla - working out when to start popping those scientists you had been saving. It's less useful in VP as it doesn't account for instant yields, but since it's available I play with it on. Note that it's more accurate than adding up the individual turns yourself because it correctly handles overflow. In particular, when a tech has just completed, all of the individual techs turn times are reduced by the overflow so adding them up can give (sometimes very) low estimates.
Steam: You've played for 10302.5 hours. Would you recommend this game to other players? Me: Maybe Later.

Thank you very much, I play with @adan_eslavo 's MWfVP all the time, it will really simplify the vision of the wonders that can be built

Archmage of all Pixels

adan_eslavo said:
This should be part of VP asap.
Click to expand...

But it needs testing for an amount of time to see if it's stable to use with minimal performance hit.
I make

fix things. These are my

Better City Defenses for VP (v 6)​
You must log in or register to reply here.