Just had to share this here! Over at the German Civ Webring forum Tehulotl (who many here would remember as Nichael) has just posted a special enhanced overhauled ToTPP version of the brilliant good old Test of Time Scifi scenario Lalande which I had such a great time playing a few years ago. I asked his permission to share it here and he said yes!

The good news is he's done it in the English version of ToT so we shouldn't have any problems playing it!

And here's a copy of his posts there:

Tehulotl
I remember buying Civ 2 Test of Time - and playing it for the first time, the Huis Clos Lalande SciFi scenario - WOW! What a stunning masterpiece on FOUR maps. I still own the original game box and CD, but usually I install a fresh internet no CD copy, I think it is legal and actually I dont care, nobody does.

I played the beloved masterpiece of the Huis Clos Lalande SciFi scenario beginning of octobre after years again, and decided in a modder typical instant rush to pimp it finally. That eye cancer skin is totally out of the question, etc. In fact, much stuff is. Now, the result after three weeks of pressure, is a totally clean, totally insane 2021 masterpiece, a ToTPP fully enhanced BAM! With 64terrain, 127 units, barbarians well done, a sharp distinction between the 3x4 Human factions and the 3x3 Funestrian factions. Now, from 3.10. til today, after pimping and testplaying, I could actually upload that version somewhere.

The nice touch is, that it is no fix scenario, one map, and all fixed in place - no. It is still the Huis Clos Lalande SciFi scenario, a four map open range insanity pimped to a clean 2021 ToTPP standard to play whoever you want, and always a new game. I should perhaps just upload it.

I use the clean english internet no CD version, have it as a .rar in my rar archive, then the ToTPP already patched Civ2.exe provided by TNO himself, and ToTPP 0.16 newest version, launch the game with all checked but the last four checks, no Lua scripting, no debugs, on Win10 Pro.

My non humble opinion is, that to implement Lua by TNO was a GREAT move, like all of his famous work. But to actually USE Lua -for me- is not worth the effort. (Grmbl, might even be worth the effort, but it is too time consuming, complicated, frustrating and I just dont have the freakin mood for that)

It is GREAT, that the option exists, famous TNO enhanced the boundaries really 21 century, and it might be great for many - but in the end it overdoses, overcomplicates, overdoes things. It is a technical challenge, and yes, it brings a ton of benefits, but the malefit of a non moddable, non playable beast, while too huge efforts, is a good old modders bummer.

"Just" to work out Lalande plus 120 kb Events.txt, 127 units, 64terrain, four maps, open range, and to stick to the roots, and to spare the insanity of Lua language, whether some things would be worth it or not, is a good old fashioned Civ 2 modders work and I am fine with it. Bouyah!

The so called "expectation management" for that game is, that the unit roster of 127 units is outstandingly good/looking. It is a smooth drawn colorful ensemble of the best of the best. Once, Naumachia, that brown mud mining planet, was just a brown muddy pile of ugliness I didnt want to colonize, cause it was just an ugly pile of a huge brown blob. Nona, the gas giant, was always a beauty, the Orbital Platform was always a great idea I had fun with. Now, these 127 units are just amazing, no sprites, just clean 2D 21 century drawings, weird, useless, ugly units kicked out, the best further enhanced. These four maps are a good looking pleasure to cultivate and terraform and colonize - except, that the Events.txt pushes all factions and all barbarian activity to an instant poisoned rush, no slow game. And if you dare to "just hop onto Naumachia", the flora of Naumachia is a rough beauty now, and the fauna is just a deadly beast show. Beautiful units, beautiful terrain/maps, but not empty anymore.

My testgame (successful) attempt to actually found a colony on Orbital Platform as the Funestrian Iihibati faction was 2 shuttles, one shuttle with captured human colonists on board, and one shuttle with my two strongest infantry, a Heth, and a Venom Corps, to defend versus the orbital Raiders. I dismantled the shuttles to instantly create the Fulmine Ring vs Air Attacks/Raiders. You could actually dare to just clueless hop around, but perhaps your troopers wouldnt survive a single turn - on no map.

The reason for me to not upload the roster as a jpg to watch, or screenshot more units and planets is, well, that shall be a surprise to experience. 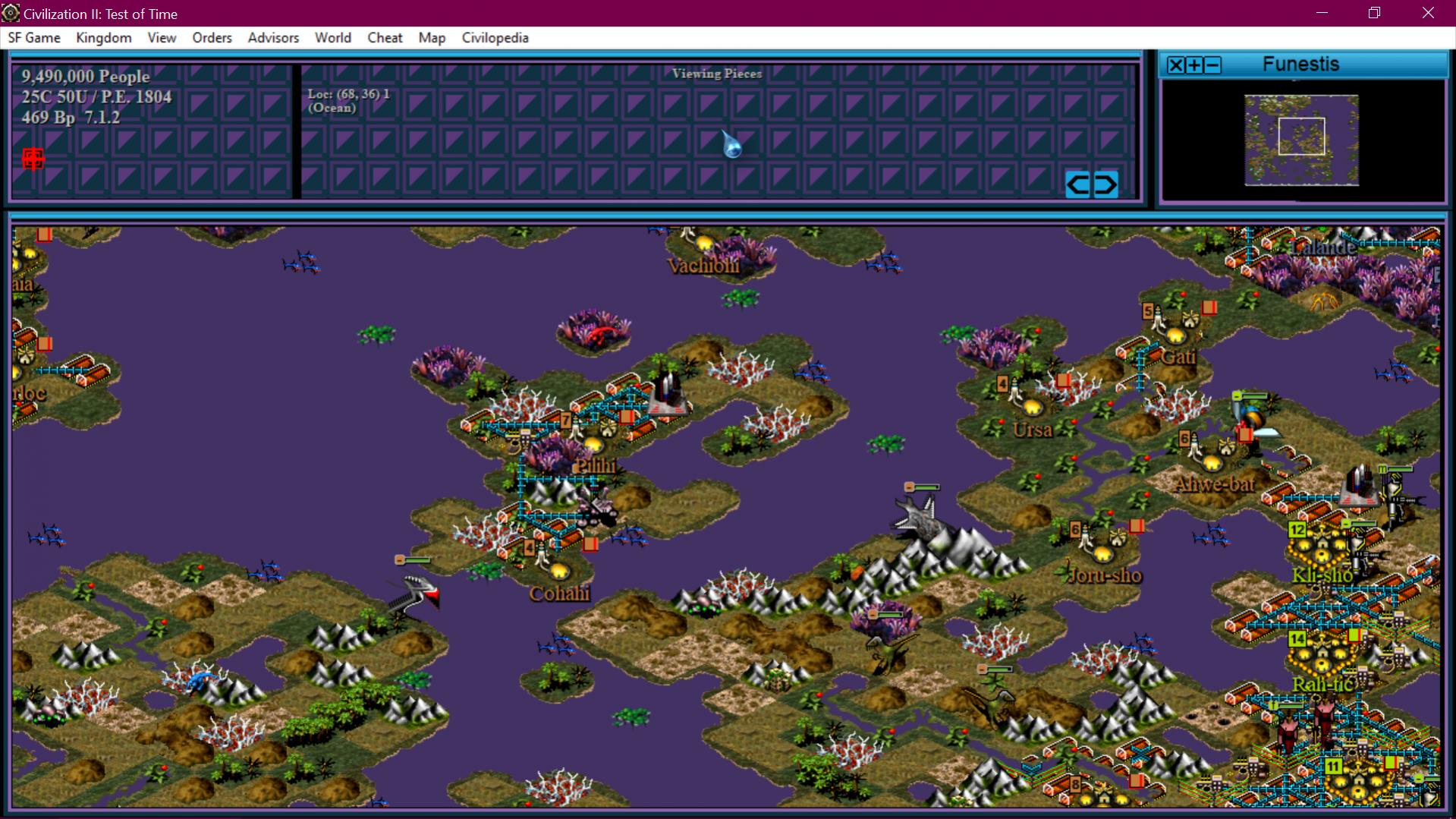 I uploaded that jpg extension here, to implement the IMG image above, it is the same. You dont need to open the extension jpg below. What I like to do is right clic onto the implemented image and "open in another tab" to watch it more closely.

I had hoped for some response or reaction, if somebody would be interested in my Lalande Deluxe scenario. I really dont care that much cause Civ 2 and Test of Time is old now - but I dont really like to just upload something right into the bloody vacuum.

Well, then I just upload it. I played the Human Sciolists whole through. I played the Funestrian Iihibati about half. Could be a testplayed version 1.0. I made SURE that you fully understand right from the start what faction you could choose, Humans 3x4 or Funestrians 3x3, you will get that right in the factions menu - easily. Cause Humans and Funestrians are now not a weird patchwork, but two sharply distinct opponents/species with different rosters - except some badass hightec units like Excelsior.

Perhaps some guys out there remember the Huis Clos Lalande SciFi scenario of Civ 2 Test of Time and think: That was the BEST experience of all of Civilization EVER - in case of a FOUR MAP total exotic insanity of a totally unique atmosphere and inter maps gameplay - never seen before, never seen after. Just... all of these weird tecs, or improvements, with these weird over the top names you dont really get, and some gfx, and some terrain flaws, and some other flaws, and... that you cant really play it, cause once you get the Repeller as 3 defense, or the Intelliraptor as 5 defense, you cant be attacked or attack anymore, unless you overpower MUCH. If you play on middle you can overthrow that roster flaw and just overrun all the others. If you play on highest you just cant attack and the other factions beat you by irrigation and street cheating and booming, while it is sloooow and just not to play. Yes. I hopefully know all of these flaws - and beat them out.

Installation:
> I have the clean english internet no CD copy, as a .rar in my rar archive, and as this copy on my HDD.

> I have the patched Civ2.exe by TNO himself. I use the 0.16 newest version of ToTPP.

> If you dont know what ToTPP is: Test of Time Patch Project. TNO or The Nameless One tweaked in a brutal and most genious way the .DLL files of the game to circumvent MANY issues. So, if you have your normal vanilla Civ 2 Test of Time, the TNO patched Civ2.exe is a no CD version to co-work with his ToTPP launcher and his .DLLs to load Civ2 either by launcher to check or uncheck options/boxes, or just by Civ2.exe if you know the game will start with your options/boxes checked or unchecked as you did/prefer, and as the ToTPP.txt and ToTPP.ini tell. I checked ALL boxes but the last 4: No Lua scripts. No debugs. Plus I provide my ToTPP.txt and .ini within the ToTPP.rar. In the end, it is "just" a co-working (patched) Civ2.exe and a launcher to circumvent/override and load with enhanced options and kicked out flaws, or, it is just THE BEST POSSIBLE version of the game. Party smiley.

> I wrote a batch file to just roll out the whole thing. If you dont trust my batch file, just secure (not empty! but secure the existing files, copy as a backup) your Test of Time /Scifi folder, put my sounds into the /Scifi/Sound folder, and all the other files right into your /Scifi folder. Perhaps cut all these unit.sprites and vanilla.sprites out of the folder to prevent glitches. If you trust my batch file, you unpack the whole .rar right into your /Scifi folder and double clic my batch. It has a menu. Follow it. It will, with simple 1 - 3, either just BACKUP hopefully all your vanilla files (the ones being overwritten in Scifi folder by batch file) into a backup folder, and then write all my mod files into the /Scifi folder, or, will do the exact opposite to restore your vanilla files and kick my mod out completely (I wont ever go back to vanilla, sorry, that mod is just insane).

> The fun thing is, that this .rar is about 2,2 mb. I will upload the LalandeDeluxe.rar plus the ToTPP.rar, so that you get easy access to both required resources and hopefully the mighty TNO (not almighty, he cant hear my prayer: O mighty TNO, please grant that upload granted) will grant it.

> Then, with your Civ2 ToT copy, hopefully you might be able to kick my mod in. Have fun!

[TOT] How to debug fatal errors on scenario startup? (no Events related)