Pre-turn: Move 1 Cataphract onto the Enslaver in the north
I'm a little anxious about the unprotected Worker gangs, particularly near Delphi. I'm going to build a handful of Pikes for guard duty.

I cancel our Gems deal with Brazil and dial up Austria-Hungary. They give us 172 gold for it, straight up.

We get Gems and Elephants back in 4 turns, so we should have some more possible trades then.

Japan complains about our ship. We apologize.

War Elephant suicides on our Cataphract on the Enslaver tile 1-0
The Golden Spear moves NW, bypassing the space. 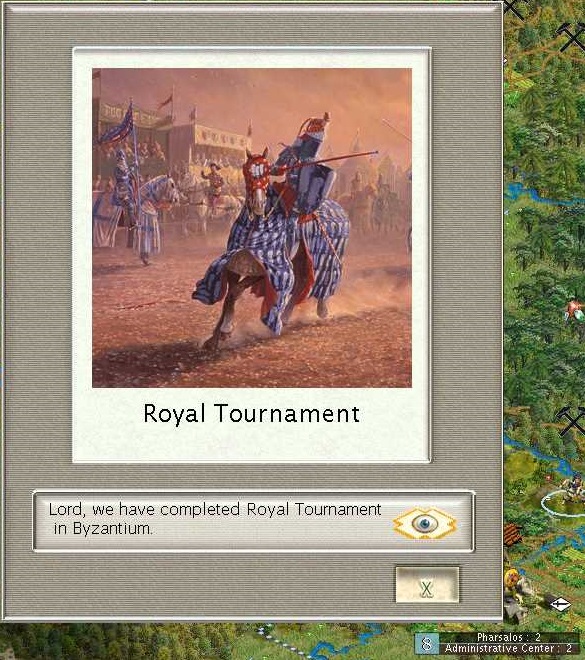 We meet Britain with the southern ship. They're up all the techs we can see, have Spices and Furs, plus Incense, Elephants, and Hardwood, and they have 8 gold. We can trade maps with them, but they won't accept a straight-up trade.

We lose 1 elite Ballista taking out a stack of 4 Indochinese units at the front. I notice the Ballista has a rather slow death animation @Civinator 5-1

Arabia has lots of gold, but Britain has resources. I'm thinking of making the deal with Britain, then seeing if Arabia will sweeten the pot. Thoughts?

We need to amass about 3500 gold to have a shot at Theology...gulp.

Britain and Southern Africa complain about our ships. We apologize.
Korea establishes an embassy with us.
South Africa is building Cape of Good Hope. 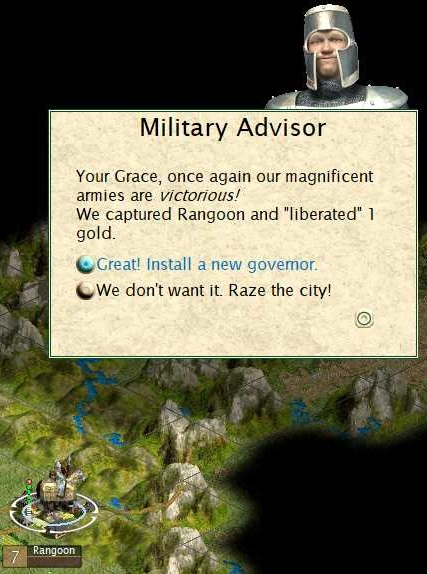 IBT:
Indochinese catapult dies against one of our Hoplites in the field 12-5
Riots break out as resistance ends in Rangoon!

We can technically afford to buy Theology, but the price is too high for now.

After a pause for discussion, I move the Settler towards the red dot.

War elephant kills our Hoplite 14-6
Rangoon deposes us, and it looks like we lose two units

Second Siege of Rangoon:
Two Byzantine Footknights kill Golden Spearmen 17-6
The city is ours once again.

We meet Poland! They're up the usual techs, have no spare resources, would buy Gems if we had any to spare, and can trade WMs.

I'm going to hold off one more turn so that I'm trading after we get Bien Hoa's iron.

Poland complains about our ship. We apologize.
War elephant retreats from our Pike. 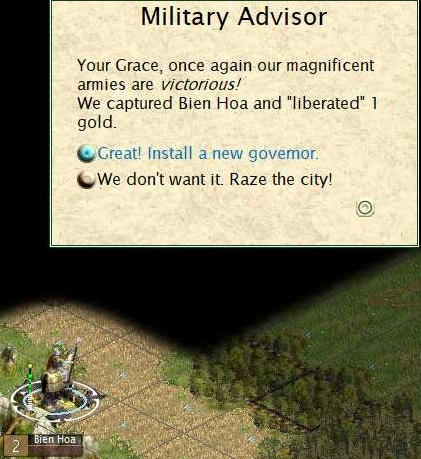 21-7
A second Enslaver finishes him off. 22-7
Byzantine Cataphract dies to War Elephant 22-8

Nubia gives us Engineering, 18gpt, and 142 gold for Theo + Alchemy.

We can't afford Clockworks quite yet, but there's a VERY nice trade chain available here!

War Elephant dies to our Hoplite. 25-8
Resistance in Bien Hoa ends.
Ancient Naval Explorer ... sinks? D'oh! I thought they were safe to explore. Oops, they're only safe in coast and sea tiles.

Japan complains about our ship. We apologize. 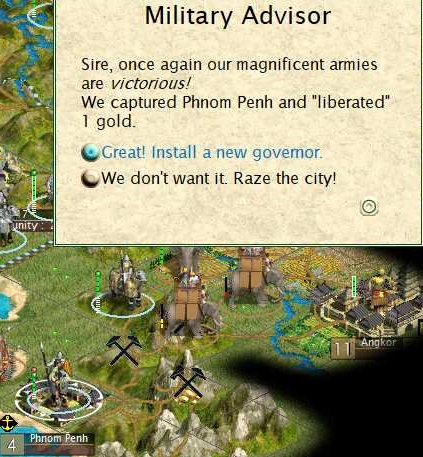 We meet Italy/Rome. They have every tech we know about and can trade WMs (so can Spain and South Africa now).

Hey, Israel and Egypt have Navigation now!
Egypt gives us Navigation, 1gpt, and 73 gold for Theology

Southern Africa gives us Clockworks in exchange for our WM, Incense, Elephants, Gems, 112gpt, and 921 gold
Turkey gives us Sacred Art and Gunpowder for Clockworks

We have Saltpeter next to Rangoon!

Another round of WM trading gets us Gold (the strategic resource), plus 12gpt and 660 gold

We still can't buy Exploration. I estimate that we're only ~250 gold short

Mycenae founded between Argos and Rangoon 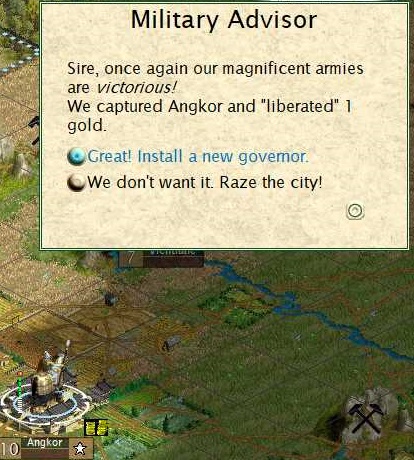 We meet the Maghreb! They're up Humanism and Exploration, have 60k gold, and are willing to give us 662 gold to swap WMs.

Nobody knows Ballistics??! Unfortunately, it will take 43 turns @ 70% research. We're going to end up trading for it.

The war is going well. We've captured 4 cities, including the Indochinese capital. There are forces in place to attack Mandalay next turn. Vientiane and/or Hanoi are both accessible, but it will take another turn or two to consolidate our forces.

Counterattacks have generally been pretty light, but don't get complacent. I've been surprised at the number of War Elephants running around every time I've seen them.

There's a Worker stack S of Sparta that's working on roading Saltpeter. They can irrigate Pharsalos once that's done.

The Workers near Mycenae are headed towards Knossos to make a consolidated stack, but they could just as easily start irrigating at Argos.

The boat by Japan should probably head towards Russia (east along the coast, then south into the bay).

The boat along the south coast near Italian territory should probably head towards Dutch territory. 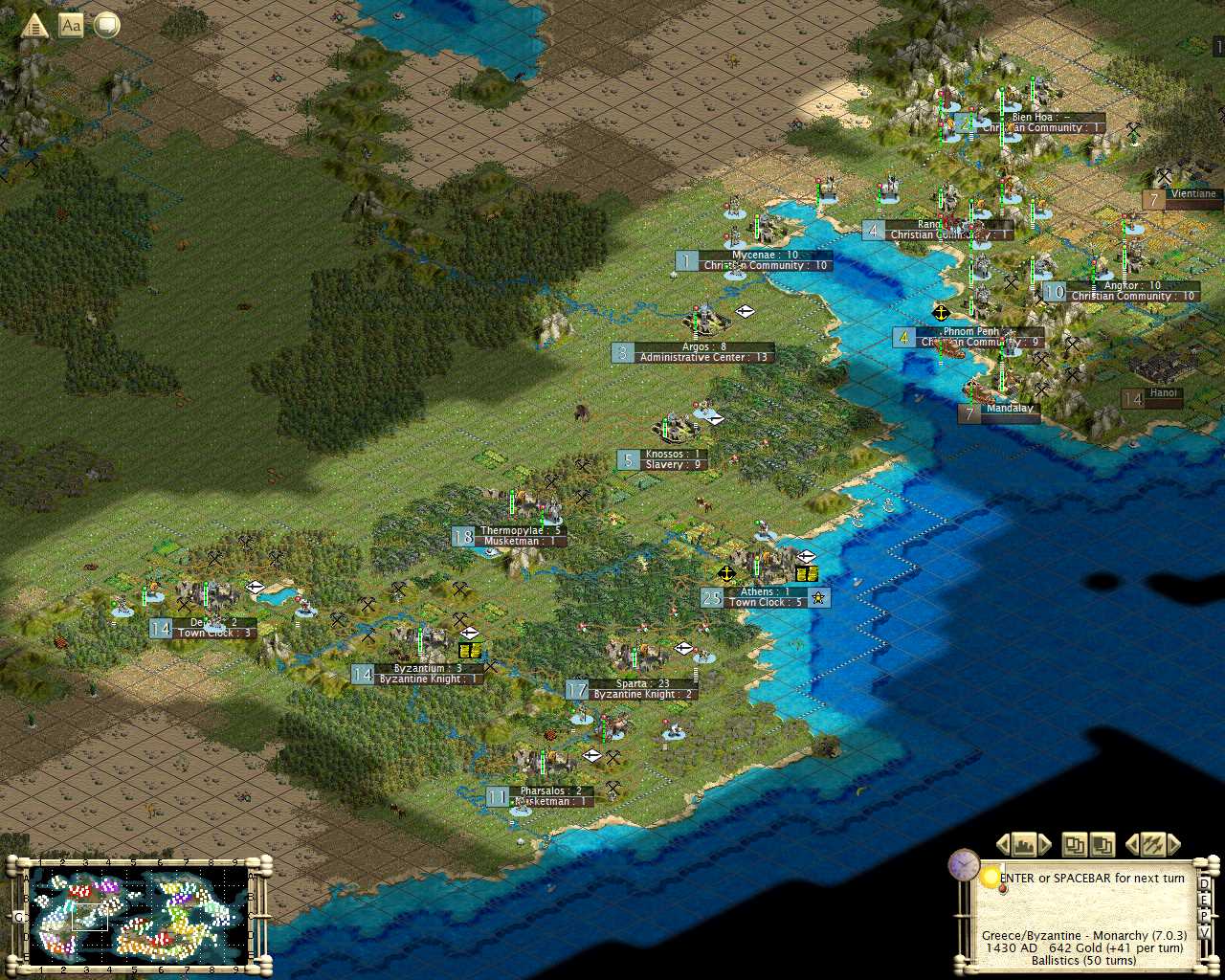 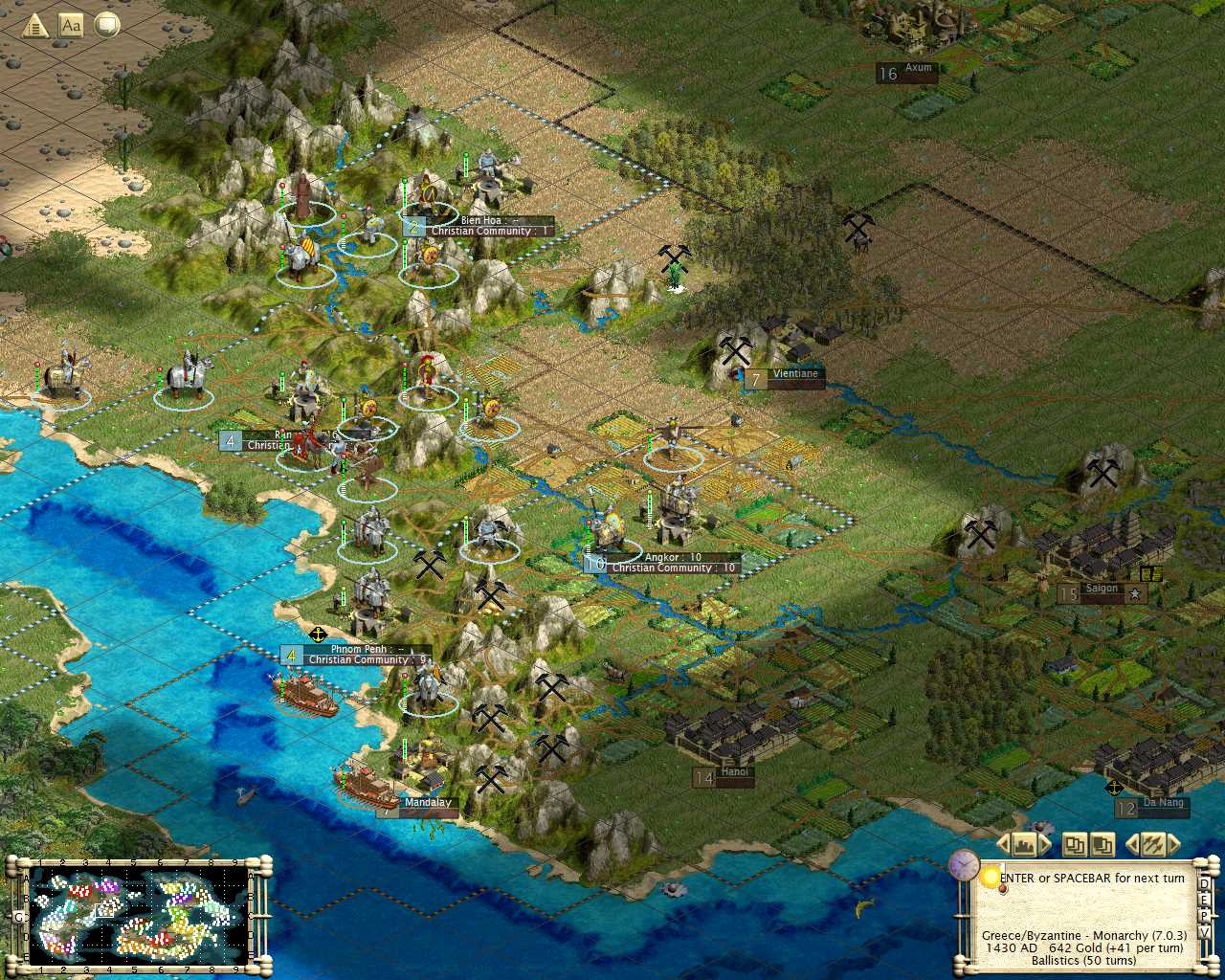 And here's the science screen: Also, thank you everyone for the extensive discussion around trades. This was a killer turnset, largely due to all the support you gave regarding proposed tech and WM trades

Looks like the trade for Clockworks really paid off.

So far buying and selling tech is keeping us close to the tech leaders. We need to build Banks for more income. In the future we are going to need to self research (or steal what techs we need.

We need to start thinking about who our next targets might be and avoid trading with them. Maybe Brazil or Nubia?

It is nice to see Indo-China cities falling.

I can't believe maps become our salvation this age with technology. It was a great trading round. I'm glad to see you did the multiple rounds of map trading trick. It really helped out. With having printing press, we can now trade maps with the world for every scrap of money out there. I'd like to start being able to use some of that cash to upgrade our troops.

With Rangoon being a saltpeter source, I am really glad we went toward Indo-China first. Once Indo-China is 100% conquered we have more stuff to trade. It sounds like we still have NOT gotten to their elephants source. We need to keep finding anything to trade to stay in the game.

The one scary comment was: "Nobody knows Ballistics??! Unfortunately, it will take 43 turns @ 70% research."
There are six cities left to wipe out Indo-China. After that we need to take break and get science and money multipliers going. Cultural buildings are also badly needed to reduce flip risk.

Our city count is up to 13 now. That puts us above a decent number of the civs. The scary one is Britain at 30 cities.

This one is by no means won, but the tech situation is way better that during my set. The empire size is growing. More civs have to fall to us to keep competing.

I just caught a VERY scary thing looking at MapStat. We have NO space iron source. Did we trade away our iron from Indo-China? If so, we have the risk of not being able to build troops if that source flips.
I hope that doesn't mean our trade rep is at risk.
Check out Lee's civ site . You can read about my RB games.
NEW - August 31, 2021. Added LK164 history.
Playing in LK168, Greece, CCM 2.5, Civ3

LKendter said:
I just caught a VERY scary thing looking at MapStat. We have NO space iron source. Did we trade away our iron from Indo-China? If so, we have the risk of not being able to build troops if that source flips.
I hope that doesn't mean our trade rep is at risk.
Click to expand...

I think what would happen is that we would be the civ without Iron and our trade obligations would be fulfilled. It would be a minor annoyance, because as soon as we recaptured Bien Hoa we would have Iron again.

Yep, if Bien Hoa or Rangoon flip again, we lose Iron (and Saltpeter in the case of Rangoon).

I left 5 attackers next to Bien Hoa as an insurance policy. I don't have a dedicated stack next to Rangoon, but a quick look at the save shows 7 attackers in range (plus 3 Enslavers). It will be worth it to keep ~4 Knights/Cataphracts next to Rangoon until we've eliminated Indochina.

Next target should def be Nubia. They're in easy striking range from Indochina while Brazil is .... count it, 23 tiles away from Pharsalos.

Hmm, OTOH, that means that we'll have a tricky defense against Nubia vs. having 3 turnsets after declaring war to kill Brazil's field army.

I'll try and comment on next target on my set. Greebley needs time to finish up Indo-China. In addition, we badly need a round or two of buildings.
I can't recall to map enough to see if totally backwards civs like Persia and China are nearby.
Check out Lee's civ site . You can read about my RB games.
NEW - August 31, 2021. Added LK164 history.
Playing in LK168, Greece, CCM 2.5, Civ3

Persia and China are both on the other continent, sectors B-6 and B-7 on the minimap grid.

Looking good all. I got it. Not going to play today (thanksgiving) so some more time to comment. Tomorrow may be busy as well but I hope to at least get a start.
Playing in LK167: https://forums.civfanatics.com/threads/lk167-spain-ccm-conquest-victory.678250/
Total Completed SGs: aprox 190
You must log in or register to reply here.