I have not started AI modding yet. I'm making smaller steps.
I'm playing with all of them, I just split them up so other people can take what they want to test and ignore the rest.

I didn't like having to handle more than one religion, someone would always be the pagan religion head and that character would get an opinion malus that can't be removed. So I made a mod that disables pagan religions.
No Paganism (XML)

With food so abundant and with no real way to use it, I added food consumption to units (mostly 1 more than current vanilla), and made population always consume 4 food. I quite like the result: You really need farms, not just on resources.
More Food Consumption (XML)

With enough elder specialists, you can currently create citizens that outperform most other specialists, most importantly: the civics per citizen from Poets. My opinion was that this doesn't make sense and specialists that you have to train should always be better than the citizens you get for free from growth. Many of the yields that scaled with culture level no longer scale either, yields were just too high.
Less Scaling Specialist Yields (XML)

Making the families somewhat balanced isn't easy. I commend the efforts in that regard by the devs, but for now I'm trying some other ideas. (This one is still very much WIP, I'm open for any ideas)
Family Balance (XML)

Ranged Units get various advantages, like no river attack penalty, no retaliation damage, but mostly really their range, which makes them really order-efficient, and they sometimes can stay far enough from the enemy, out of harm's way. That makes melee units a bit uninteresting in comparison. My solution is simple, and fights involving many units get really cramped. I love it.
Reduced Range (XML)

Sometimes you want to connect your lands to that small island off the coast, or a mountain blocks your city's territorial expansion: if only you could buy water tiles directly, you could reach that patch of land that has no city site. Well now you can
Buy Coastal tiles (Harmony-DLL)

I have enough space on my drive, don't want to manually save all the time, but still want to keep savegames in case I want to report a bug later. The obvious solution was
Unlimited Autosaves (Harmony-DLL)

Some smaller things I changed didn't get their own mod, they got collected in the
FimMod (XML)

Today I started preparations to mod the AI, by making a Harmony-DLL mod that exposes all the constants that the AI uses for decision making to XML, like the Better AI mod from the good old days

Anyone who's interested can look at it here, I attached it to this post - it's not on mod.io yet. To use the folder in the zip needs to go to %UserProfile%\Documents\My Games\OldWorld\Mods - as always. (edit: fixed improper closing tag in XML)

So I finally got around to implement at least one feature I wanted: Alternative Unlock Conditions
I think I got it working, including help text for the improvements themselves: they will tell you how you can unlock them. From the other side, the techs and other conditions however don't tell you about their new special unlock powers yet. (Helptext is hard work.)
AI also doesn't know about this yet, so they can't work towards any such new unlock condition - but once they get an improvement unlocked in a city, they should be able to build them normally.
This mod doesn't use Harmony, and is therefore incompatible with all DLL mods that also don't use Harmony.
To test this mod in an environment close to vanilla, you can use Base + Test.
I made a new version of FimMod (which includes all of Test, and no longer includes the Worker Grid Mod) and the now separate Worker Grid Mod for this; all my other mods are compatible as they are.
(edit3 except for Test, the mods are now on modio.) 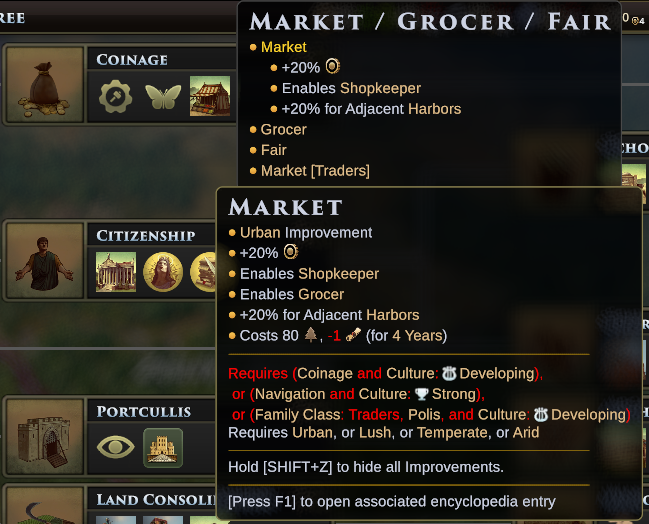 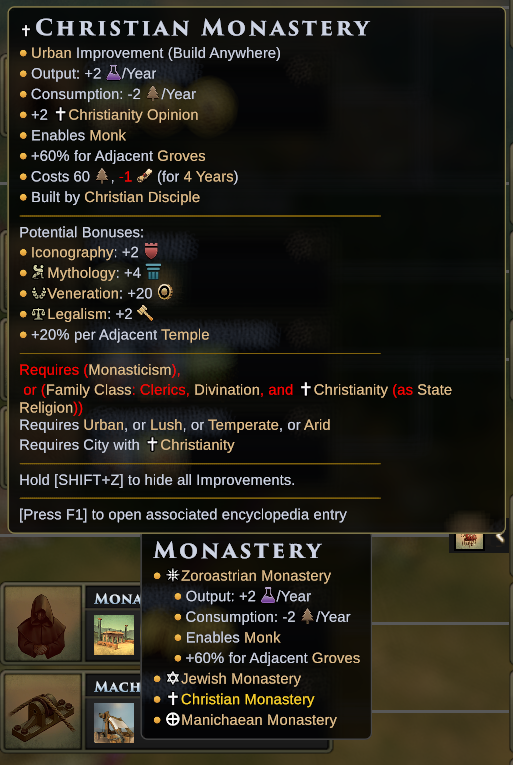 Oh right, there was this other feature: City Biomes. Based on the non-urban, non-water territory tiles, the game decides if the climate around the city is either cold, temperate or hot, and I made it so that based on that only one bath is available. 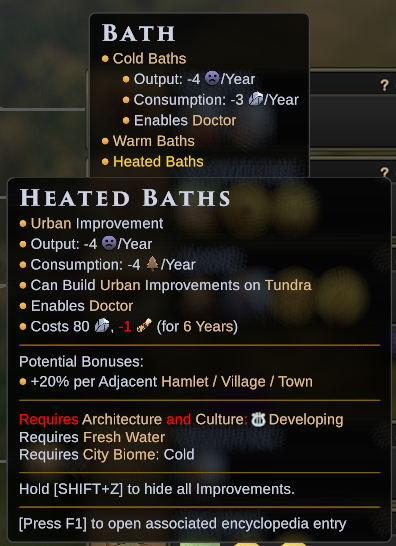 (Just in case anyone wonders why I called my DLL "Better AI" even though it doesn't even touch anything AI-related, that would be 1) Because I do plan to touch the AI very much 2) Because I have the naming sense and creativity of a demented pill bug and the last time I did DLL modding the mod was also called "Better (BTS) AI".

I couldn't update 3 of the 4 mods that need an update, so for the moment I'm uploading them here.

Formerly known as Fuyu.
[Civ4] Better AI is abandoned, use Advanced Civ instead.
[Old World] my little Old World mods (see also on mod.io)​
You must log in or register to reply here.

8
[MOD] Does anyone know what Final Frontier (Plus) changed to break specialists?