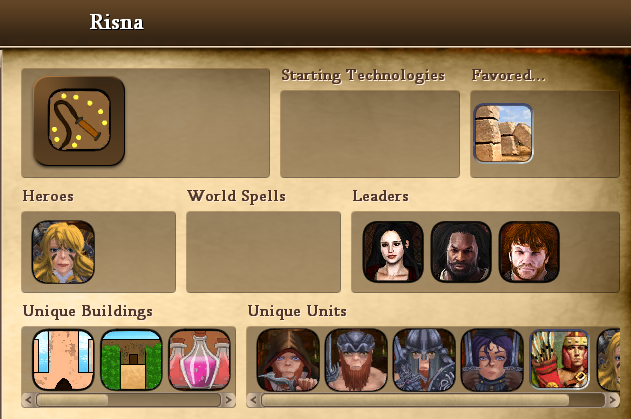 Introduction
Risna is my first self created Civilisation for the Master of Mana Extended mod.
I was inspired by the Mekara Order from Ashes of Erebus. The Slave Settle Mechanic was copied from them and edited for my own Risna Civilisation.

I tested the mod with the Steam Edition of Civilisation, as it allows me to play the game over internet with a friend

Leaders
Nirasun: Charismatic/Agricultural
She is the "good" Soul under the Slave Masters of the Risna. She knowns how to charm her slaves to be productive and happy, even if she is, in the end, still their mistress.
Nirasun has neutral Alignment

Umkarash: Financial/Slavemaster
He is the mastermind behind the Golden Hand Guild Branch and a very strict man. For him, the flow of money is the most important thing, mostly as a nice sum goes to his own pockets.
Umkarash has evil Alignment

Urhash: Aggressive/Master Tactician
He is the slave hunter under the Leaders and the High General of the Armies. His aggressive Nature is supported by his brilliant tactical wisdom, which allows him to win most battles with minor casualties on both sides. After all, the enemy soldiers are way more useful as Slaves than dead.
Urhash has evil Alignment

Main Mechanics
The main mechanic are the slaves, a new specialist Type.

Three special buildings increase the output of your Slaves. All three are natural wonders, which require certain districts. If you have all three wonders build, each settled slaves provides you with +2 Production, +1 Gold and +1 Research.

ToDo/Help accepted
- There is no World Spell till now. I am missing a good idea and the knowhow to programm a world spell right now.
- There are no Lore Entries written in the mod itself right now. Most Texts are market with "To do". I would be very grateful if someone writes some texts. I will probably write some in the future as well, but I wanted to publish the mod to get some feedback first

- Balance. I think the Balance is Ok right now. It seems not to be overpowered and not to be underpowered, but I am no master of civilisation 4. Feedback welcome.

Known Issues
- The maximum of the Slaves has a little bug. You can always settle the calculated amount +4. I don't know from where the +4 comes from. Maybe a more experienced Python Programmer can tell.
- Rise of a Legend gives you a Slavehunter, the base Recon Unit. I wanted to be independent from editing the main files of the master of mana mod. Thats means I can't edit the Rise of Legend Python script, as my Module would become broken more easily with Updates of Master of Mana.