Welcome to my challenge run! Some time ago, one of my friends asked me if we can succeed with the Repulsive / Uncreative combination. I did not choose the ideal build to start, but here is what I rolled a couple of weeks ago:

We already mentioned this is not the ideal build. For example, we might have done much better to replace Subterranean with Telepathic. However, we are rolling with what we rolled and we are treating this map like a puzzle to solve. (A couple of weeks ago, we ran afoul of a hole in our tech build and we gave the game a rest instead of grinding through the ending and betting we could win the vote before losing too many colonies - and chalk the experience up as a lesson.)

Here is the start: 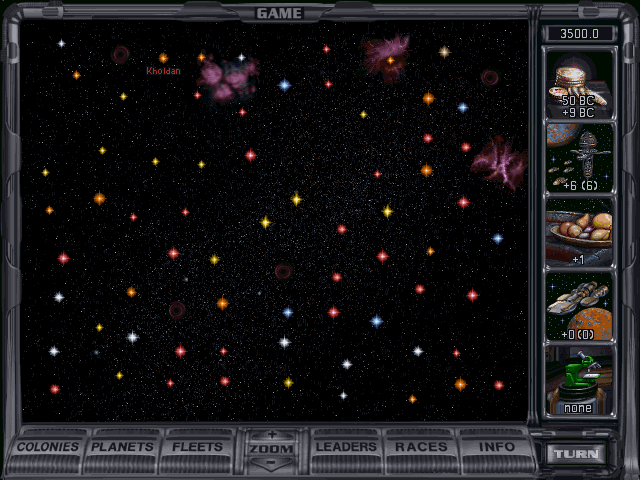 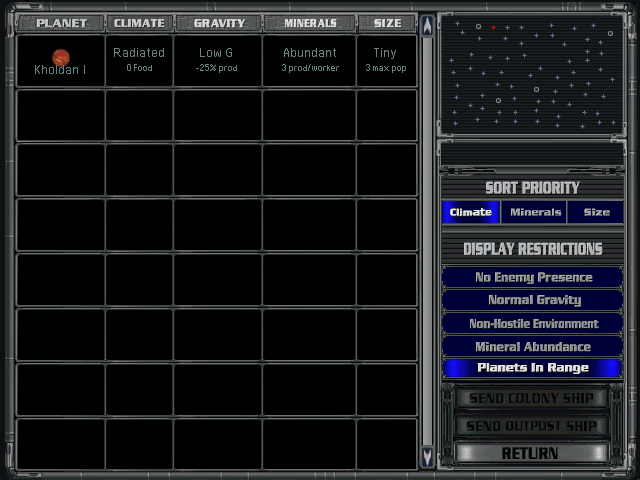 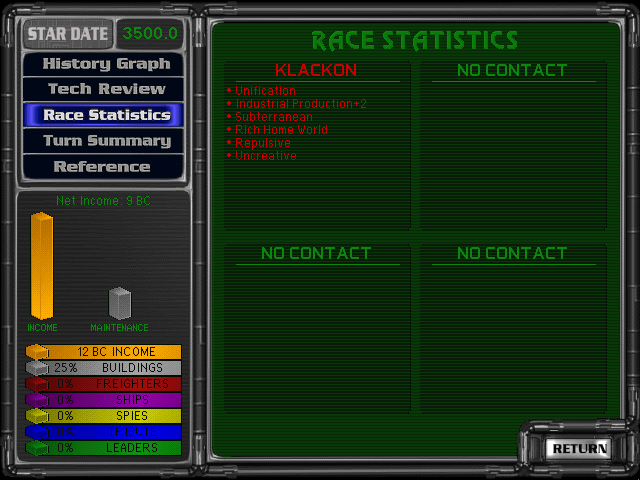 Part 1, Turn 58 - Initial Exploration and First Contact with the Bulrathi

Something interesting about an Uncreative run is sometimes it forces a different play. In this case, for a very long time, my standard play was to build a Research Lab, then Auto Factory, then Freighter Fleet, then Colony Base. Checking the research tree, we found neither Research Labs nor Auto Factories. We can still build a Colony Base.

Notation is Type followed by maximum population with Subterranean and the mineral content and specials or gravity.
If we include 4 Black Holes, this marks 12/71 Systems.

Leaders:
T21 Gizmo - This was a lucky break, because on our home planet, research points are very expensive. We are also Repulsive, so we will take anything.
T54 Galis the Financial Guy - We dismissed him right away, because it will be many turns until we can make a profit from him. By throwing him back, we increase the chance an AI empire gets him and he might come back in 25 turns or so with an extra level.

Unsurprisingly, the Bulrathi are ahead of us in the tech race. They have Anti-Missile Rockets and ECM Jammer. The do not have Tritanium Armor, so that puts us about even. We quickly designed a Destroyer costing 124BC with ECCM Nukes.

Right now, these Destroyers are nowhere near enough to take out that Space Crystal and bust open the game. Researching Merculite Missiles will help. At 27 Turns, this will take us to about Turn 85.

Here is our map: 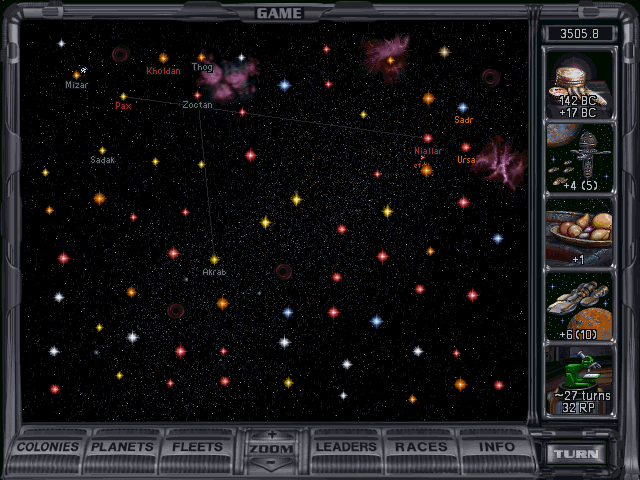 News, Events, and XenoPolitics:
T64 - The Bulrathi have started to spy on us. We give them approximately 1.36% chance per turn of success if we just ignore them. We also have no buildings and no tech that will win them the game if they obtain it.
T87 - We opened the war with the Bulrathi by destroying their two BattleCruisers and retreated to our Outpost Base at Ursa Prime.
T88 - We then proceeded to destroy the Ursa Starbase and started our bombing campaign.
T88 - We also had first contact with the Darlok. We quickly put up a couple of Agents to defend against the incoming onslaught of spies.
T93 - Ursa Captured with 1 Population. We will assimilate it T143.
T101 - The Long-Range Army Ant B's defeated the Star Base at Sadr. We started another bombing campaign.

We showed two discoveries of Optronic Computer on T85 and T87 because the RNG delivered us a space-time anomaly that had to be fixed by Sparky the Gadgeteer. The anomaly showed up when we were arriving at the Ursa System. Losing our main system and all of our food production for an indefinite amount of time, 5 Turns plus a 14 turn half-life, is kind of game breaking. Our options were to either attack right away instead of building the outpost and delaying the attack. The other way around was to not make our 38% research roll and get Optronics two turns later.

We did the workaround. We eliminated the Bulrathi and scored big. We have Deuterium Fuel Cells. We appear to be winning the espionage war against the Darloks, which is amazing. They had two spies in our territory and they are down to zero for some reason. They will be back.

With the Bulrathi eliminated, we now have access to their home planet and effective +1 Farmers and HG Workers. Our Collective is getting better. The Darlok will contribute +1 Tolerant Workers. It has been pointed out to me that Unification Tolerant Production +1 is better than Unification Subterranean Production +2. Now we have access to either option. 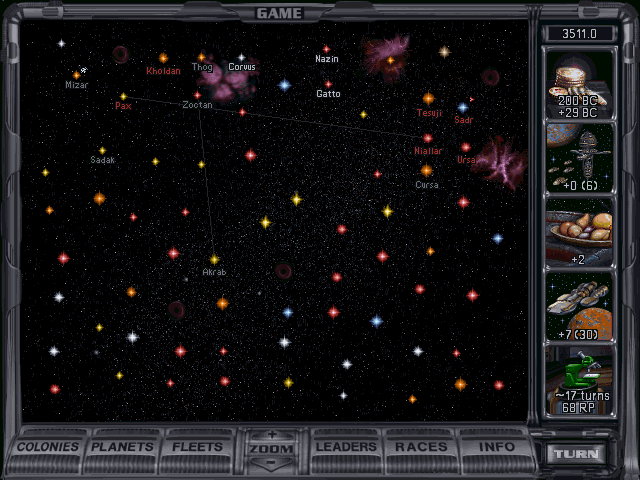 Apparently it took an entire 48 Turns to eliminate the Darlok and some more rules and lessons were learned.

Leaders:
T121 Crass available at 90BC
T123 Hired Crass and we sent him to the Kholdan System
T129 RIP Aquasaurius


Here is the rule we are trying to understand. It looks like we can build an Outpost in a system if there are no enemy fleets to oppose us. We needed the Outpost in the Nazin System in order to be able to send Transport ships. It looks like if there are Darlok ships to oppose us then we cannot build the Outpost. We will have to keep this in mind for times we need Outposts to make range for Transports.

Here is the map: 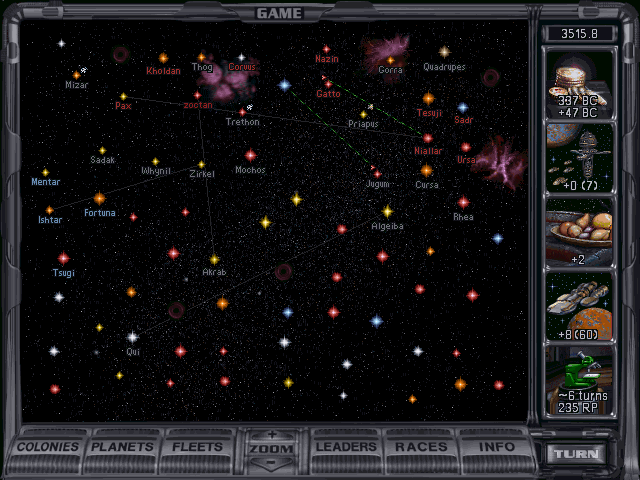 Psilons appear to be......
250 in Construction
650 in Chemsitry
900 in Computers - So they also have Planetary Supercomputer and Holo Simulator
900 in Physics
I did not see anything in Power.
1150 in Social
80 in Biology
900 in Force Fields - Right now we have no response to Autofiring Armor Piercing Mass Drivers

There are also a few space monsters we can kill while waiting.

We are a total of 8 spies out of 12 spies built. We lost 1 spy to the Darlok war and 3 spies to the Elerian. We gained Pulson Missile and ECM Jammer and lost AG Harness. That puts us about 650RP ahead in the espionage game at the cost of 4 spies. We seem to be defending against quite a few.

News, Events, and XenoPolitics:
T159 First contact with the Elerian
T170 - The Psilons destroyed Ant 4 while exploring the Ishtar System. They have Nile and Tyranno.
T172 Pirate Raid - They stole 495BC

We took this time to build up as many Star Bases as we can so we can build up our fleet - and also research our way to Class 5 Shields. That will give us some protection against AP Mass Drivers. The Radiation Shields will help as well. With that little time delay, we really should be taking out the Elerians.

Here is the map: 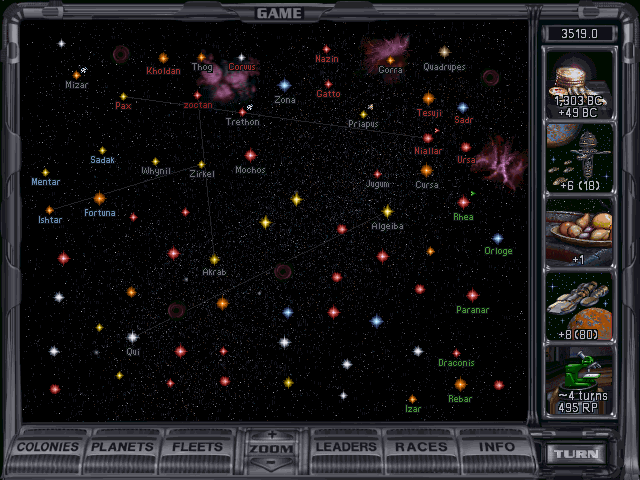 Hatty Tries Again on Earth2 Instead of Earth18 (Emperor)

M
Challenge Run #2 All the Wonders

[Col] Old-School Colonization - Who will show me how to play?