Civilization VI - Game of the Month 88​
Welcome to the 88TH game in the 6OTM Series! These games will allow new and old GOTM fans to try out the new features in Civ6 in a friendly environment. Participants are encouraged to post questions, stories, advice, tricks and failures in the dedicated game threads (described below). Each game will specify the Civ you will play and the Victory Condition to strive for. We will be working to refine the 6otM concept as we move ahead with the series.
Must Read!

We would like to ask you to abide by our most sacred rule: Dont replay any turns! If you make a mistake, accept it and try to recover. To ensure fair play and prevent results exclusions, please set your Autosaves to 1 turn. In the event of a computer crash while playing, just reload to the previous save and play it as closely to how you played it the first time. Please let Leif, or Myself know (via Conversation (Private Message)) if you experienced a crash and how many turns you replayed. Gifting of cities is an exploit in a religious VC the AI cant see that it will lose if it accepts the cities. .
Click to expand...

Housing from being adjacent to fresh water or coast. Cities gain +1

Amenity for each Luxury Resource adjacent to the City Center. Farms receive +1

Unique Ability: IX Mutual Ajaw: Non Capitol cities with in 6 tiles of the Capitol gain 10% to all yields Citites farther away suffer -15%. All units receive +5 combat strength within 6 tiles of the capitol
Unique Unit: Hul'Che

This Is where you will start: 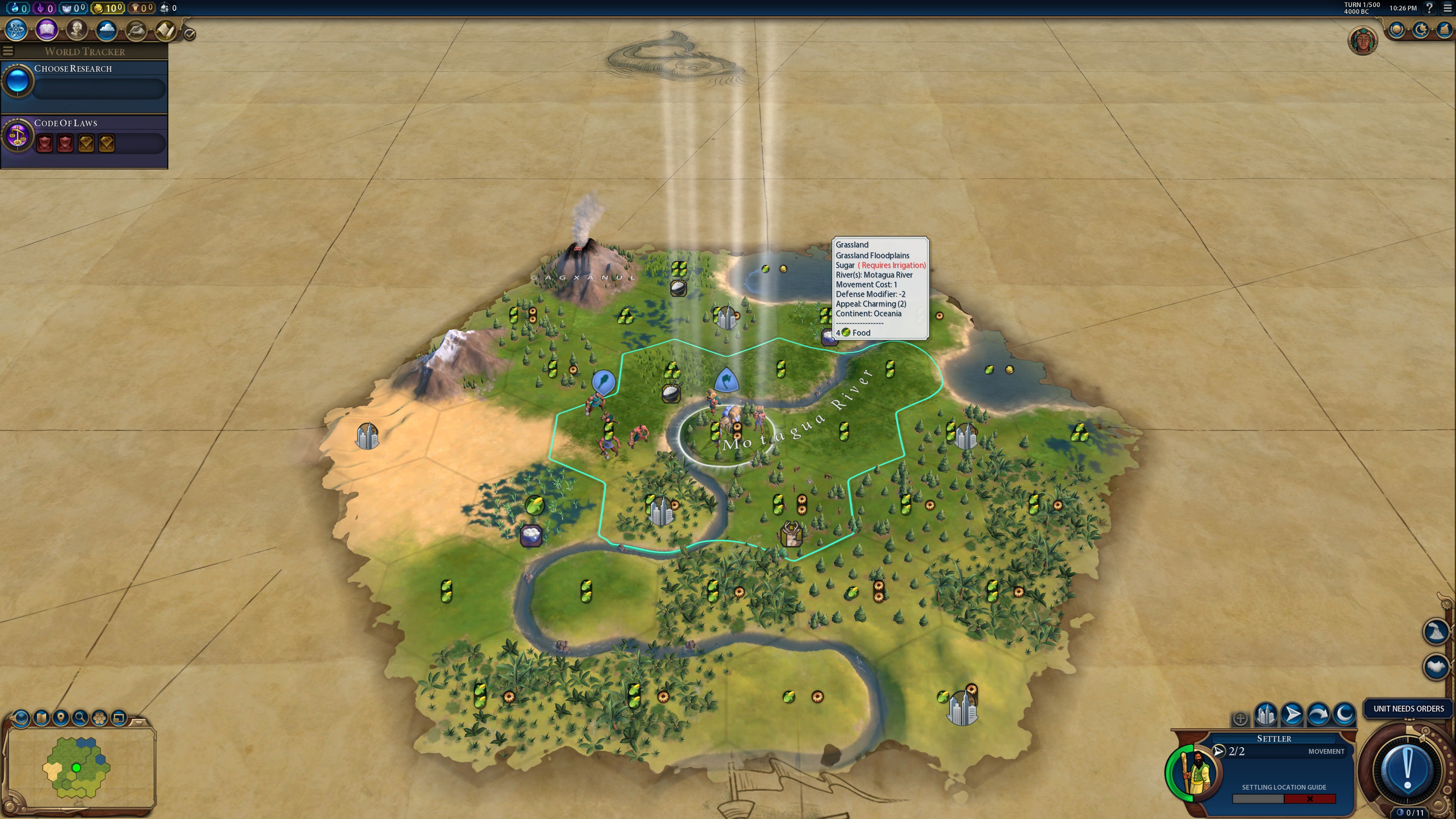 Information about threads associated with each individual 6otM -- Must Read if you are new to our Game of the Month!

Spoiler :
Please note: If you wish to make a video of your game, please do not post any links to it until after the game submission date has passed. This is because of the potential spoilers that are created by posting before the end date. Thank you for your cooperation.
Announcement thread (this one): This thread is used to announce the game and clarify the settings and rules (dont be afraid to ask questions). Its also used to discuss the game before you start, and post problems with opening the save. Once you have opened the save, DO NOT POST in the Announcement thread, even non game-related information. Instead use the next thread.
Opening Actions thread: This thread is used to discuss the game's opening decisions and strategies through the first 100 or so turns. Here you can post questions related to the game and share your achievements/anger/frustration/victories while you play. We encourage players to use the spoiler tags for screenshot. During the time the game is active, please do not post any information concerning the game outside of the spoiler threads including screen shots, videos, or recorded/live-cast Let's Plays on other websites.
After Actions thread: In this thread you can post the results of your game. Please state your victory/loss date and final score (preferably in the post title) and describe your path to glory in this post! Players are encouraged to provide feedback on the game. Some players like to replay the game, and although we will not record the results from a replay, you can still post your new experiences. The game will not be closed as such, but after one month, the results will be compiled, and will not necessarily be updated with reports coming in after the finish date.
Results and Congratulations thread: We will create a separate thread with the results at the end of the one month submission period (sorted by date and score). We will issue medals to the top 3 winners (based on earliest date finished). There are no long-term records kept for these results, they are just given out to top finishers to reward their efforts.
File Upload System
In development.

What a nice game - the Mayan Apocalypse Science Victory! So this has to be wrapped up before 2012, when it's the end of the world ... as we know it

Not a bad spot for OCC except the volcano is too close on Apocalyptic.

May move capital inland and try a tall (not OCC) peaceful science run.

Wonder if I can build Great Bath in time in second city to abuse soothsayer flooding faith per tile.

I think to maximize cities with the UA bonus (and avoid UA penalty), we need to move inland.
"You mean you'll put down your rock and I'll put down my sword and we'll try to kill each other like civilized people, is that it?”
― William Goldman, The Princess Bride

Cross the river to the recommended spot next to the sugar. Work the sugar for quick 2 pop. Place observatory on desert between sugar and mountain. Aqueduct between sugar and rice, government plaza on the other flat desert. That will make the observatory +2 from plantation, +2 from government plaza and +1 from 2 adjacent districts. Plus it sets up for the university next to mountain eureka as well is preparing for the industrial zone, aqueduct, dam triangle.
Spooning leads to forking.
Forking leads to knifing.
Knifing leads to the Dark Side.

Concur on cross river to next to sugar; I don't want to take the time to move too far for a 'perfect' circle of bonus cities, I'll do with less city spots and the one movement does allow a future city next to the other sugar, but wouldn't do that one early. Prince means long ages and lots of early barbs to accompany the plethora of Apocalypse disasters - really love and hate forest fires (great when not in city boundaries, but loss of population sucks inside boundaries); really hope for some close meteor showers. Can't remember last time I played on huge, so should be fun. Really like the new diplomatic negative for capturing capitals. Would love to get the Great Bath, but won't make it an early priority - would be massive faith synergy with Soothsayers causing floods for me.

Where are the Opening Actions and After Action threads?
Spooning leads to forking.
Forking leads to knifing.
Knifing leads to the Dark Side.