So, this was a Noble difficulty game, the easiest level we run for GOTM. Everyone who had time to finish the game posted a victory. Three of our players decided that Noble was so easy that they went with the Challenger save, which went all the way up the scale to Deity level. (And they still all won! What do I have to do to give our Deity players some trouble--start all the AI with their own Humbabas?)

As always, though, the real competition in a GOTM is not between humans and the AI, but in comparing the results of all of the human players. And in that respect, the competition in this game was outstanding!

At the top of our leader board was the battle of the conquerors. Jovan Kukic took home the Gold Medal. hhhawk took three centuries longer to win his conquest for the Silver Medal, but in so doing, he also took the award for Highest Base Score, the "Cow". (It has been my impression that anyone who plays the game to maximize their base score usually ends up much lower in the overall standings. How often have we awarded a Silver Cow?) Kaitzilla achieved his conquest faster than either of these two players, taking home the Fastest Conquest award, but in concentrating on that objective, he came up a little short in population, land, and science, and so had to settle for the Bronze Medal to go along with that. Oh, and one other little detail: Kaitzilla did that while playing at Deity level!

Just behind the conquerors, we had the race of the spaceships. Conquistador_63 came in fourth place, but in fifth place, nocho grabbed the Fastest Spaceship award by arriving at Alpha Centauri just one turn faster. One turn!

As for the rest of the field, we had at least two players (usually three) achieving each of the victory conditions (well, nobody ran out the clock for a time victory), so there was competition all around. None of the awards were handed out by default. MirrorGuard won the Fastest Domination, also while playing at Deity level.

Well done, everyone! Thanks for playing my game.

The bug has been fixed! 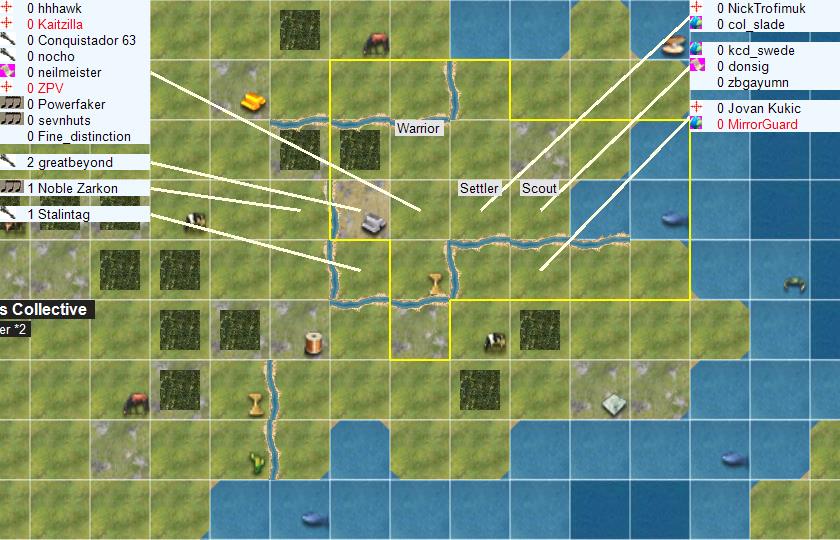 The Small Print:
The numbers by each player's name indicate the turn settled on (starting turn is 0). Players are colour coded by game class (challenger=red, adventurer=blue). Symbols indicate victory condition, if there's no symbol then the player either retired or was defeated. The yellow border indicates the land that was visible at the start of the game.
Last edited: Sep 11, 2022

I want to talk a bit about designing this game. I wanted a map showing Britain and northwestern Europe, ideally one that was taller than it was wide, whereas most of the maps in this game are wider than they are tall. I ended up starting with a tilted axis map, which is a 64x64 square. I was going to follow that convention and draw everything lying on its side, when I realized that didn't matter with world wrap turned off. I just deleted all the land on the map and started from scratch, with the normal up=north alignment. I compressed the North Sea a bit, and pushed the Orkneys and Shetlands to the east to make an invasion bridge for the Vikings, since they didn't need to wait for galleons in real life. The map latitudes I set, 45°N to 70°N, while making the Space Elevator an impossibility, were meant to make it clear what part of the world we were dealing with. What some were thinking of as the antarctic was really supposed to be Normandy and Brittany.

I'm sorry about the lack of happiness resources. I placed them in more-or-less realistic locations and Europe just doesn't have much in the way of silk, spices, incense or ivory. I did push the Azores/Canaries up into the SW corner of the map and put a couple of those there. Then, for the Faerie Realm, I decided I'd follow the fantasy map rule of "anything goes". Putting all of those resources there also made that land a tempting target.

When I joined the GOTM staff, Noble Zarkon suggested using the AutoAI Mod for game testing. That mod lets the AI take over playing a number of turns for you while you watch. Let it go, and it can complete an entire game in half an hour. The "human" faction run by the AI, particularly if playing under a higher difficulty handicap, is going to do pretty badly, but this testing let me see how well balanced or imbalanced all of the AI were. With all of the extra land in the SE corner of the map, the Saxons consistently became the dominant player during these tests, so I kept tweaking the map to make it worse for them, adding more mountains and deserts, moving their starting position a bit to the south and adding the Danes as an additional AI, etc. Since you all managed to deal with the Saxons, I guess that didn't much matter.

Fine_Distinction made a comment about having two Viking AI players in this game. I agree that other games that left the default names unchanged were unnecessarily confusing during diplomacy. "I want you to cancel your deals with the Viking." Uhhh, which ones? I thought that having distinct names, Harald/Norway and Canute/Denmark, would eliminate this problem. Was it still a problem that their own images were identical and that they'd appear in the diplomacy sessions without names to distinguish them?

Kaitzilla had the correct report about Morgan's monsters. She had a bomber/dragon named Fafnir and a frigate/sea monster named The Kraken. They apparently worked well together in a defensive role, resulting in the loss of a galleon and its passengers. Of course, in the hands of any human player, that frigate would have been much more of a scourge on shipping everywhere, for millennia. The warning signs Morgan posted were only supposed to be warnings that you were getting close to her territory, not indications that the monsters were actually stationed beneath those signs. For context behind the quote "Look at the bones", as well as for the Autonomous Collective and Castle Anthrax, I recommend watching Monty Python and the Holy Grail.

DynamicSpirit showed us how to customize city names in his COVID Lockdown game, using CityList= lines in the WorldBuilder file. I thought I could just customize a few names and let the computer use the default names for the rest, but my first test indicated that it will use the names you give it and then all the rest of that civ's city names will be blank. So, if you use this feature, you've got to be sure your list of names is as long as maximum number of cities a civ can be expected to settle. For Romano-Britain, I found a list of actual Roman sites in the UK. For the other civs, I used a list of modern towns from the respective countries or regions. A bit anachronistic, but it had the right flavor. How can you not like those Welsh names, with far too many consonants and far too few vowels?

For the Faerie Realm, I picked some names from The Dictionary of Imaginary Places.
Last edited: Sep 8, 2022

Thank you very much for the game, MG! I enjoyed playing on a relatively high-res "real" map, despite the paucity of happiness resources

, and the Python touches were fun. Unfortunately, mid-Aug to mid-Oct are always crazy busy for me at work so I wasn't able to finish, and won't be able to play for awhile. That gives you time to cook up another especially fun one, right?

MarleysGh0st said:
Fine_Distinction made a comment about having two Viking AI players in this game. I agree that other games that left the default names unchanged were unnecessarily confusing during diplomacy. "I want you to cancel your deals with the Viking." Uhhh, which ones? I thought that having distinct names, Harald/Norway and Canute/Denmark, would eliminate this problem. Was it still a problem that their own images were identical and that they'd appear in the diplomacy sessions without names to distinguish them?
Click to expand...

Hi @MarleysGh0st, as others expressed here before, I am very grateful to the GOTM stuff for keeping the BOTM going and I particularly enjoy custom BOTM games! So don't worry too much about my comment, it was just a very minor inconvenience in an otherwise very well-designed game. What I meant is that name changes are fine, but if you otherwise kept standard (restricted) leaders and only use one of a kind (i.e. one Ragnar etc) it will be easier to map who Harald was etc. What I was referring to was that when I was getting a message eg. "Harald want to trade Corn" I would typically click on all the scores on the right to find out who the heck he was since the colors where also non-standard due to unrestricted leaders ... but I was unusually busy irl that time and for people knowing better the history of the British Isles it will probably be easier. On the other hand, in many GOTM games custom leaders where successfully created from standard civ leaders, like in the Lockdown game Pathogens were Zulus, and Nurses England under Victoria and even though some nitpickers were saying that poor Zulus had nothing to do with covid, unlike another civ nation, in the end it did not matter and Zulu's bright green was actually an effective color for Pathogens. So personally, I would vote for easier recognizable AI opponents and eg valuing contrasting colors more than historical accuracy but I am sure some people would not agree. Again, thank you very much for the great game! Wandering barb units with names were a lot of fun and the map was great!

Fine_Distinction said:
Wandering barb units with names were a lot of fun
Click to expand...

Zoot was supposed to be guarding Castle Anthrax. I guess her twin sister Dingo wandered off with the grail-shaped beacon and Zoot went out to find her.

I really enjoyed the creativity. May you long have the energy to put in that degree of effort for us mortals!

(Grovelling and "I'm not wooorthy

)Myself, as mapmaker I often made an effort to ensure the AI were not balanced between each other... quite a different game if Ghandi is dominant in one player's game and Shaka is dominant in another's. But the Humbaba idea is a good one.

Try it out. (There will be plenty of wailing and gnashing of teeth, but you can tell them to "Always look on the bright side of life")

Again, thanks for a fantastic adventure!
"You mean you'll put down your rock and I'll put down my sword and we'll try to kill each other like civilized people, is that it?”
― William Goldman, The Princess Bride
You must log in or register to reply here.