We have two new Succession GOTMs on the launch pad. Countdowns have started, with both lift-offs planned for December 14:

Civ4 Warlords will provide the battle ground for C-IV SGOTM 6, a "Gyathaar Mystery Game". All we know right now is that it will be a Prince, Always War, Standard Size, Epic Speed, and win any way you can. Sign up here to join a team and experience the thrills and spills that only a competitive Succession Game can offer.

With a bit of luck, we'll get more information about the starting position before we release the game ... but don't count on it 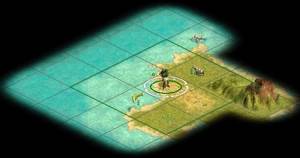 Civ3 Conquests plays host to Rik Meleet's pre-wedding map design for C3C SGOTM 13. Your team will steer Tokugawa of Japan to an historic Demi-god Space Race victory on a Huge map, starting on a desert island, with 29 opponents. Sign up here to join a team that will aim to achieve this feat in the fastest time.

Click the start image on the right for a bigger version.
-- Alan --