Our most sacred rule: Do not replay any turns!
If you make a mistake, accept it, and try to recover through game-play. To ensure fair play and prevent results exclusions, please set your Autosaves to "1 turn". In the event of a computer crash while playing, just reload to the previous autosave, then play on the same way you played it the first time. Please let Leif or me know (either in the forums or through Private Message) if you experienced a crash and how many turns you replayed.
Click to expand...

Your Unique Characteristics:
UA: City of Light: Museum and World Wonder theming bonuses are doubled in the capital
UU: Musketeer (Musketman): Stronger (28 vs. 24)
UI: Chateau (Fort): Must be built in French territory, and next to a luxury, but cannot be built next to another Chateau. In addition to the fort's standard 50% defensive bonus, also yields 1 Gold and 2 Culture (raises to 3 Gold and 3 Culture after Flight is researched).
Click to expand...

Here is where you will start: 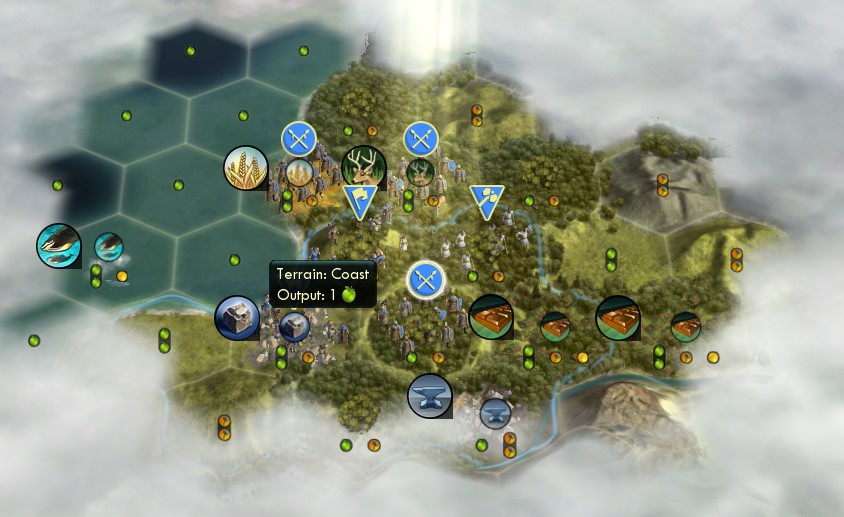 The start file is attached below.

Information about threads associated with each individual TSG - Must Read if you are new to the Game of the Month!

Spoiler :
Please note: If you wish to make a video of your game, please do not post any links to it until after the game submission date has passed. This is because of the potential spoilers that are created by posting before the end date. Thank you for your cooperation.
TSG Announcement thread (this one): This thread is used to announce the game and clarify the settings and rules (don't be afraid to ask questions). Its also used to discuss the game before you start, and post problems with opening the save. Please don't post any game-related info once you open and play the save. Instead use the next thread.
After Actions thread: In this thread you can post the results of your game. Please state your victory/loss date (preferably in the post title) and describe your path to glory in this post! Players are encouraged to provide feedback on the game. Some players like to replay the game, and although we will not record the results from a replay, you can still post your new experiences. The game will not be closed as such, but after one month, the results will be compiled, and will not necessarily be updated with reports coming in after the finish date.
Results and Congratulations: We will post the results at the end of the submission period in the After Actions thread (sorted by earliest date and highest score ).

File Upload System
We have a game file upload system you can find here. Please use it to upload your completed first attempt by saving the game on the turn after your victory or defeat. (by using the "lemme play one more turn" feature) Please note: you must submit your game on the turn following Victory. If you continue to play, the game overwrites the data and your submission could be rejected by the submission system.
This game runs through 31 December 2022.

Never played a medieval start before. And we start with the Three Musketeers, guess we're going to have to get medieval on their...
S

raider980 said:
Never played a medieval start before. And we start with the Three Musketeers, guess we're going to have to get medieval on their...
Click to expand...

Me neither. A practice game would be very helpful.

France is ideal for culture victory (again), but diplomatic might be faster...

Did some test games FYI you start with 2 settlers the tooltip hides the one on the screenshot. You also get 200 culture which is enough for three policies. Gold is a big problem early on so look to improve and work lux tiles. Each new city starts with shrine and monument hence the gold squeeze early on.

letsgobucs said:
... FYI you start with 2 settlers the tooltip hides the one on the screenshot....
Click to expand...

I'm gonna try this out. I never really play as France, but it makes sense to try to leverage their UA for a CV.

Loose plan, I'd like to build granaries/workers, and maybe some scouts, with my first two cities while they get to 4-5 pop. Scouts won't be as important as usual since there won't be any ruins or barbs, but I'd still like to meet the world and...scout. Then make up to 2 settlers to round out a 4 city Trad build, land/luxuries permitting, and rush HG immediately after. It will be an important wonder not only for growth, but also the free garden, since I don't see fresh water where I intend to settle the capital (the wooded coastal hill). Expands will rush out granaries/caravans/cargo ships to feed the cap for explosive growth, then enough workers to have 8-10 total, then libraries.

I might be able to use my 3 spearmen to harass a neighbor for free workers since no barbs.

Tech-wise, probably unis immediately (likely will build one in the cap before NC is ready), then workshops/Leaning/Globe/Sistine in some order. I'll have to find a way to squeeze out guilds and national epic in my capital in between uni, NC, and all the culture/tourism wonders. Public schools from there, Oxford into Radio if possible, get first ideology, Uffizi and Broadway, then go for hotels. After that, Flight --> Radar I guess? If the game goes that long.

Policy-wise, I don't think I'll have time for Rationalism, so it'll be straight into Aesthetics from Tradition, then Freedom.

I'm not seeing much in the way of faith-generating pantheons, unless there are more quarries or natural wonders just out of sight, but I'd like to get some decent faith-gen going somehow, if not a religion, so I can buy at least one engineer for the wonders, and maybe some musicians if needed to speed up the CV.
You must log in or register to reply here.