The Nobles' Club series started out as a way for Noble-level (and below) players to improve their game. Most of the original participants now play at much higher levels, so this has become a way for advanced players to help others learn to play better. You can play your own game at any level and with any mod, but it would be nice to comment on the games of other players and give them advice. 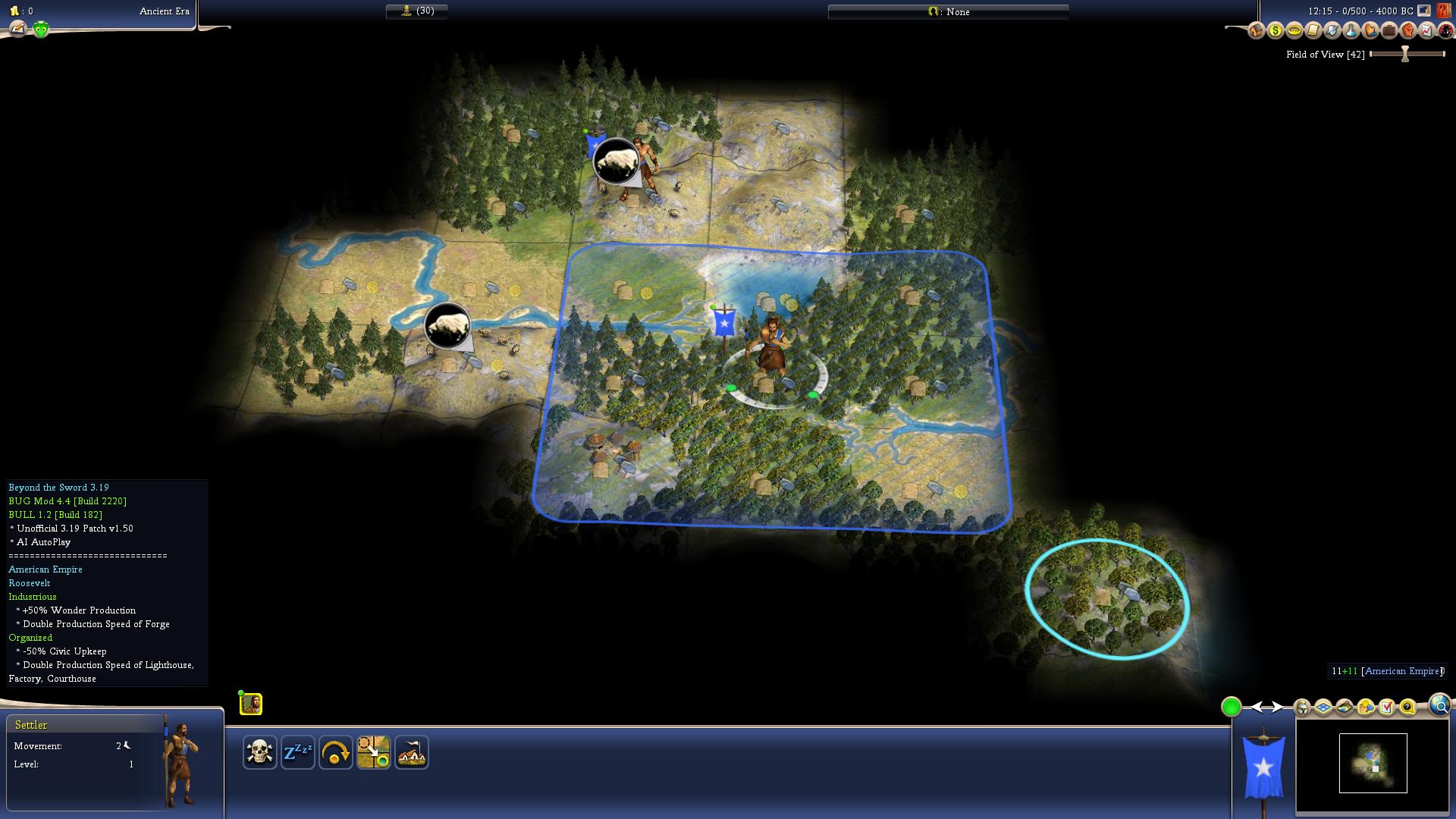 Spoiler map details :
Fractal, temperate, medium sealevel.
Spoiler edits :
Moved some unworkable fish to your coast, and moved one of the Sheep to try and better balance the resources in your starting area.
Spoiler isolated? :
Not iso.
The WB-saves are attached (zipped; they are bigger than standard saves). To play, simply download and unzip it into your BTS/Saves/WorldBuilder folder. Start the game, and load your favorite MOD (if you use one, if not, check out the BUG MOD), select "Play Scenario", and look for "NC 303 Roosevelt Noble" (or Monarch, etc., for higher levels). You can play with your favorite MOD at the Level and Speed of your choice. From Quick-Warlord to Marathon-Deity, all are welcome! We stuck with the name "Nobles Club" because it has a cool ring to it.
Spoiler what's up with specific difficulties :
In each scenario file you can select your level of difficulty, but that doesn't give the AI the right bonus techs by itself. Use the Noble save for all levels at and below Prince. The Monarch save gives all the AI Archery. Emperor adds Hunting; Immortal adds Agriculture; Deity adds The Wheel.
Spoiler what is demigod :
The difference between Immortal and Deity difficulty is akin to the difference between Noble and Immortal. Players eventually reached a point where Immortal was too easy, but Deity was still out of reach, and so neither difficulty provided a fun experience. "Demigod" is an otherwise standard Deity game where the AIs are only given their Immortal level starting units, in an attempt to bridge the gap.
Spoiler for players on Monarch or above :
You should add archery as a tech for the barbarians (if you don't, the AI will capture their cities very early). This cannot be done in the WB save file and must be done in Worldbuilder as follows:
Spoiler how to add techs to the barbarians :

If you're playing at higher level than Monarch, consider also giving them Hunting at Emperor, Agriculture at Immortal, and The Wheel at Deity.
Spoiler huts and events :
Note: The standard saves have no huts and have events turned off. If you want tribal villages and random events, choose the saves with "Huts" in their names. If you want huts but no events, select the Huts saves and use Custom Scenario to turn on the option that suppresses events.

Double plains hill sheep is not my idea of a good food start, so I think move the Warrior 1NE, pray for better food and settle on the PH 2N if there's something. If there's nothing...well, SIP and pray, I guess? I don't know if I'd be comfortable with a 2N move if there's only the one chance to get a food tile beyond a single plains hill sheep...

What do the experts think

Conspicuously, the 3 tiles two East of the settler are not forested, neither is the one two South, nor is the one 2W1S.
The warrior move cannot reveal any of those. I would be very hesitant to move the settler away from its starting location.
Standardized number of resources in the settler's BFC is 4 (including Coal, Aluminium etc.), floodplains counting for 1/2 a resource, lakes sometimes pushing a resource outside of BFC.

I'm not sure what the warrior move could reveal to detract me from SIPing but scouting NE sounds good.
H

Warrior NW or NE and if anything interesting is revealed we can consider moving to the river west for a turn. PH sheep are worse than plains cow and dry rice, would drop them in a heartbeat for a corn.

Going NW with settler means we can keep the sheep but 2N for PH loses a sheep in hope of something better.

I feel like you have a better chance to find useful stuff moving the warrior NW, NE might just reveal tundra tiles further north and moving the settler there would be away from both rivers
Last edited: Jul 18, 2022
Civ 4 Immortal and Deity player

Is that the coast I see 2SE? In which case, head for that hill!

Got to build the great lighthouse with Roosevelt

Plain hill Sheep looks a little uncomfortable with Roosevelt's start, because putting lamb instead of beef in the burger sounds a little unusual

resources for playing as Americans is Cow + Wheat, cow for the cheese and beef, wheat for the burger bun

. Some lettuce or tomatoes nearby would be appreciated, as lettuce and tomatoes/ketchup add flavour to the beef burger. With potato for fries it would be even better

. However, BTS has no potato or tomato as resources

(The new smilies in the upgraded forum are amusing

The start looks a little mysterious. The three tiles on the east might have some resources...

? It's tough to make decisions before gaining further information.

Though often overshadowed by the two other American leaders, Roosevelt is still a decent leader: good starting techs, solid traits. Even there is no marble or stone for wonder-spamming, cheap forges are still nice. ORG factories fastens the industrialization when the game becomes long. But I have some ongoing off-line games now and also need to deal with real life, so I'll just watch

This is a deceptively tough map! I wonder if that's why there's no posts discussing it?

On my first attempt i just tried to expand quickly and block land because there's room for probably 8ish cities here. I settled the cow-copper to the south and then the FP spot to the NW as my blockers. After being committed to that approach, it became apparent this is basically semi-iso (at least at the beginning) and we appear to be Catherine's only land target. She is a very dangerous neighbor to have early in a game with her crazy expansion and aggressive personality. Sure enough, the red fist came up right after i settled my 3rd city in that FP spot. I was considering gifting her a city, but this was too early for that as you need at least Alpha to beg. Instead, i started building axes. I got 3 into my city with 2 more en route before she attacked with a stack of 6 units. I think if i had been 1-2 turns faster with my axes i would've been fine. On the first attack i lost 2 axes, 1 warrior, and 1 chariot leaving just 1 wounded axe inside. On the next turn i got a 2nd axe in there who died to a follow up attack from her leftover units. On the 3rd turn i moved my 5th axe in leaving 2 healthy axes, but a chariot showed up with more units likely coming behind it. That was basically game over for that attempt.

2nd attempt has been more fun, but also looks kind of doomed at this point. I delayed BW and went AH > Mining > Masonry > Oracle techs > BW ? > etc. I settled the stone + fish + rice and later the cow + silver, conceding the contested spots to the AI. There's actually decent early commerce here with 2x sheep, horses, and marble, and enough production to build early stuff without chopping. I took HBR with the Oracle and then chopped the Mids for Police State. I was able to build HAs really fast with that setup, but Cathy just gets sooo many cities here. I think she had 11 already when i attacked her. I razed 1 and captured 2 without suffering major losses. Even managed to kill her initial counter-attacking stack of about 8 units (no spears) with just 1 loss, but that was pretty much where the good news ends. Next city had about 10 defenders including 4 spears, and that's where i stopped. The game isn't lost, but i think she's just too big still with too much production and her tech pace has been very fast.
Last edited: Aug 9, 2022

Izuul said:
This is a deceptively tough map! I wonder if that's why there's no posts discussing it?
Click to expand...

Yes ! Also a rather poor start.

And Cathy is a well-known backstabber and competent AI.
I played some turns the other day and missed on Stonehenge. The fail gold is nice to carry the tech pace but it is very painful to start on a Monument in city 2.
I also SIPed, which is very questionable, because I couldn't bring myself to settle 2N or even 3N where there is no riverside. 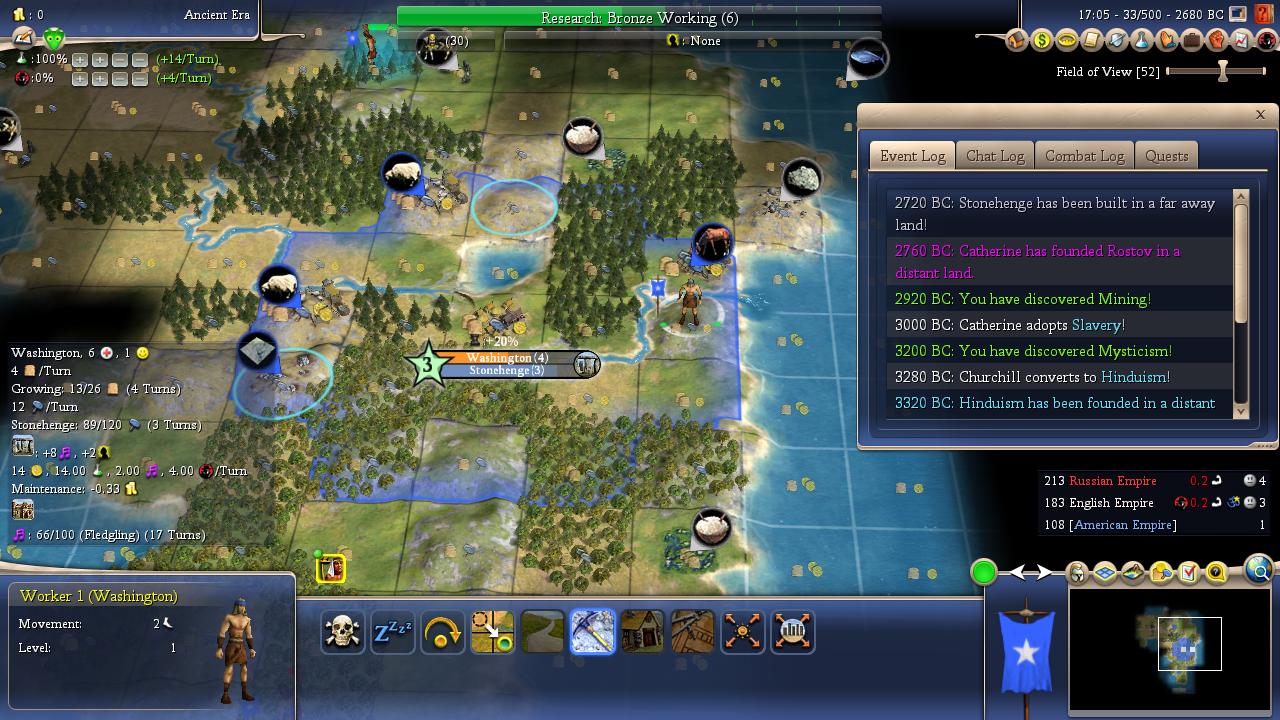 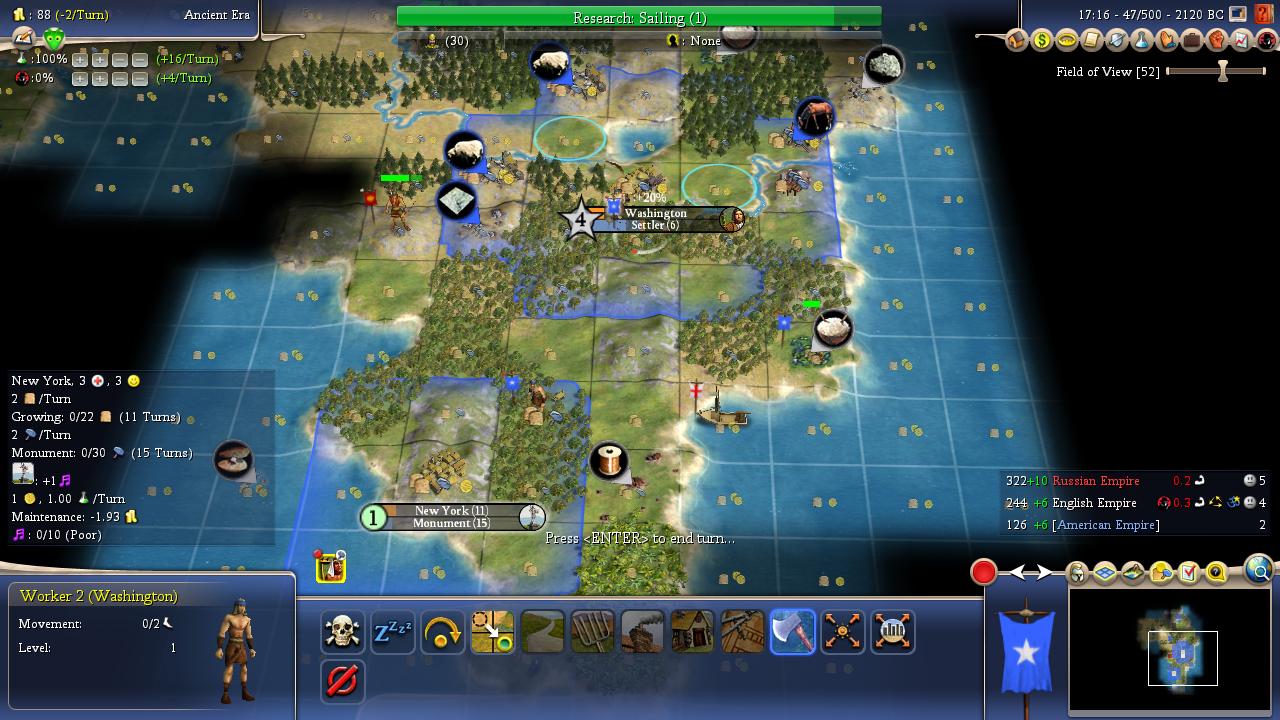 Not interested in playing it out but I have to complement the map. It's hard to find one suitable for niche strategies.

I was more fortunate than you. 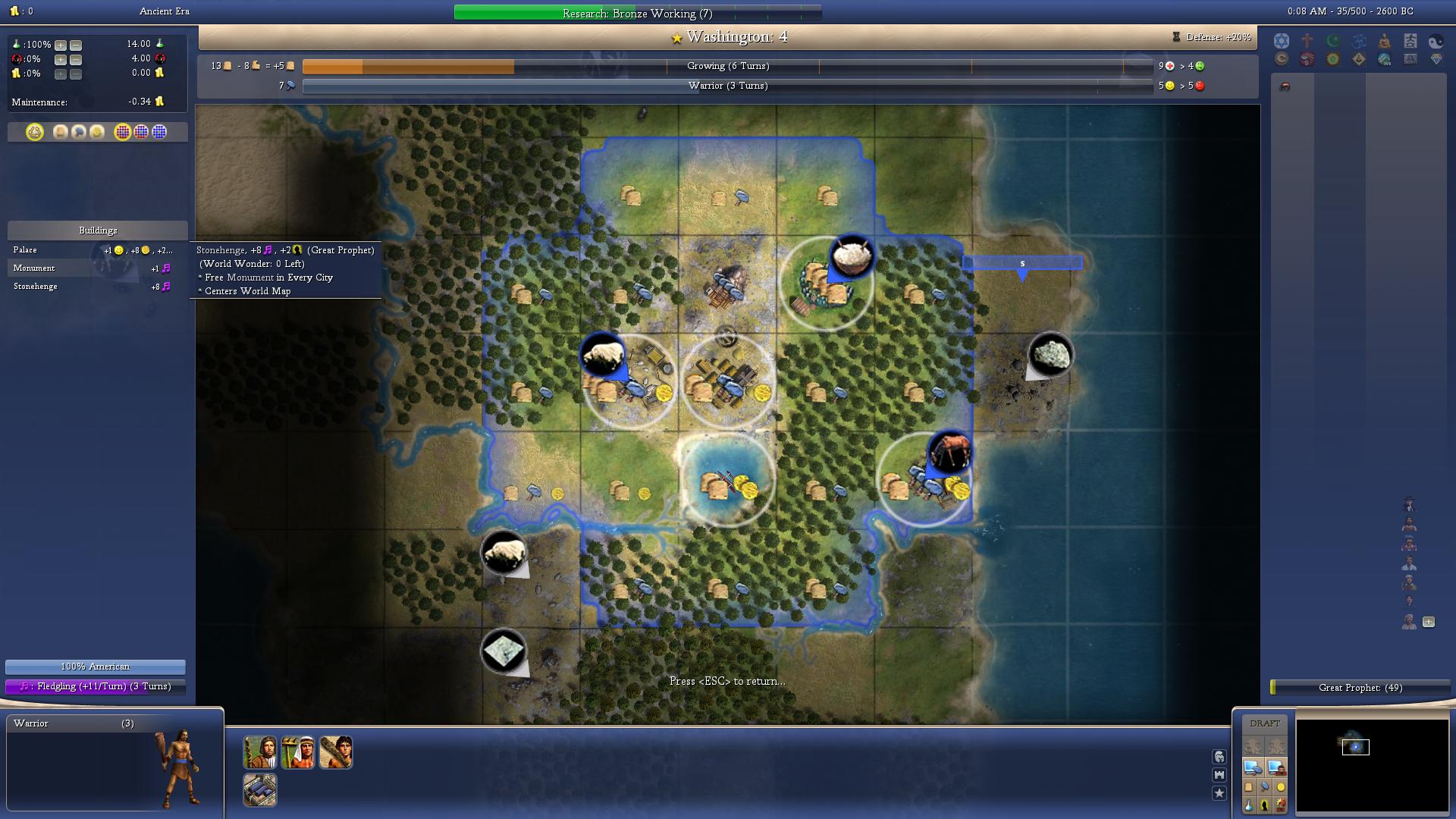 Pyramids for sure. We need masonry for marble, stone, and Catherine. Catherine is not Shaka so archers behind walls are fine. The victory condition is catapults.

sylvanllewelyn said:
I was more fortunate than you.
Click to expand...

The all-important first step ! Glad to see it happening.
You must log in or register to reply here.

Nobles' Club 314: Justinian I of Byzantium