The Nobles' Club series started out as a way for Noble-level (and below) players to improve their game. Most of the original participants now play at much higher levels, so this has become a way for advanced players to help others learn to play better. You can play your own game at any level and with any mod, but it would be nice to comment on the games of other players and give them advice.

Our next leader is Qin Shi Huang of China, whom we last played in NC 237; we last played the Chinese under Mao Zedong in NC 287. The Chinese start with Agriculture and Mining.
And the start: 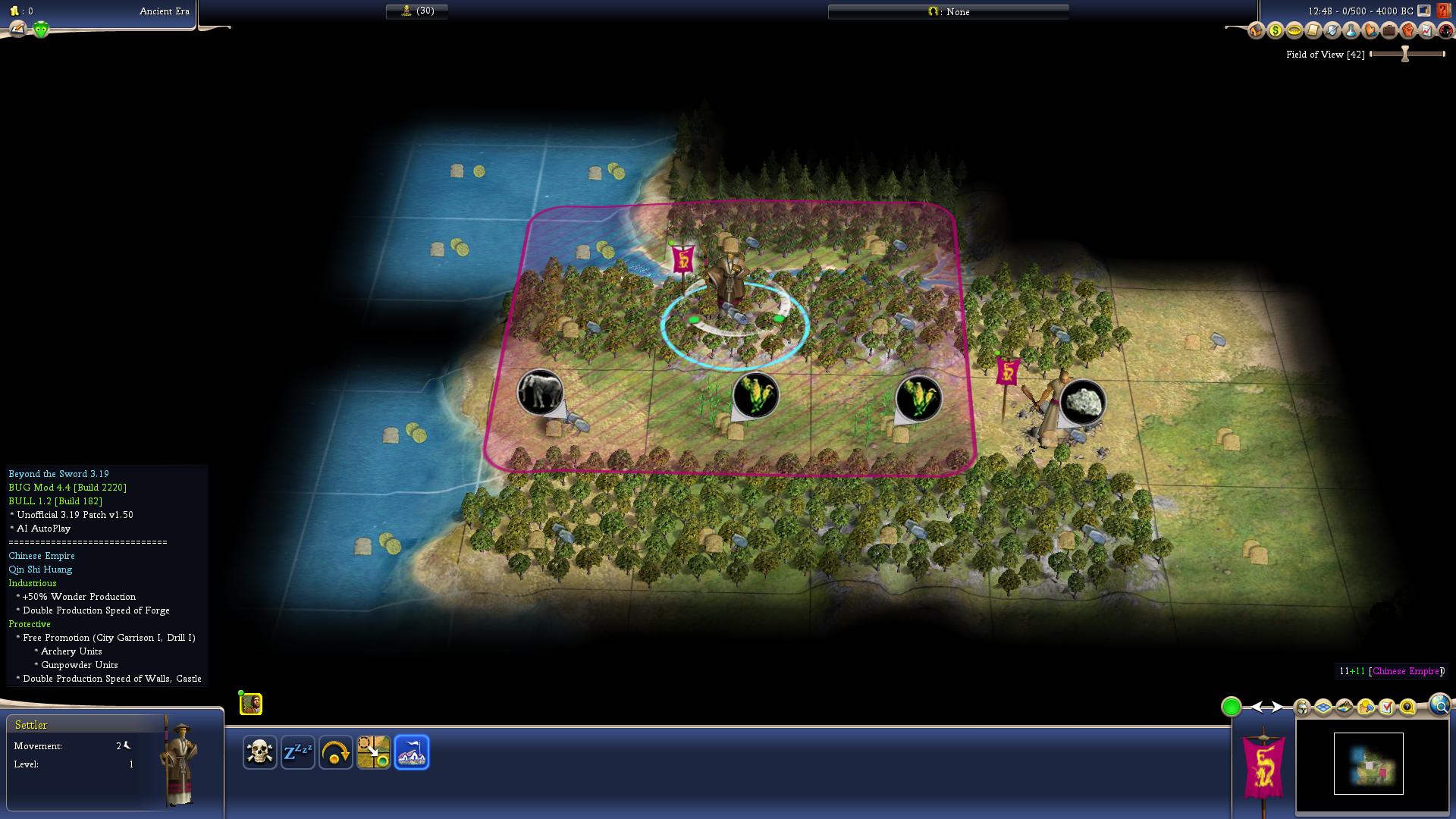 Spoiler map details :
Fractal, Temperate, Medium sealevel.
Spoiler edits :
The usual resource swaps, and a river was redirected to pass by your starting area so an otherwise useless stretch of desert would turn into usable floodplains.
Spoiler isolated? :
Not isolated.
The WB-saves are attached (zipped; they are bigger than standard saves). To play, simply download and unzip it into your BTS/Saves/WorldBuilder folder. Start the game, and load your favorite MOD (if you use one, if not, check out the BUG MOD), select "Play Scenario", and look for "NC 311 Qin Shi Huang Noble" (or Monarch, etc., for higher levels). You can play with your favorite MOD at the Level and Speed of your choice. From Quick-Warlord to Marathon-Deity, all are welcome! We stuck with the name "Nobles Club" because it has a cool ring to it.
Spoiler what's up with specific difficulties :
In each scenario file you can select your level of difficulty, but that doesn't give the AI the right bonus techs by itself. Use the Noble save for all levels at and below Prince. The Monarch save gives all the AI Archery. Emperor adds Hunting; Immortal adds Agriculture; Deity adds The Wheel.
Spoiler what is demigod :
The difference between Immortal and Deity difficulty is akin to the difference between Noble and Immortal. Players eventually reached a point where Immortal was too easy, but Deity was still out of reach, and so neither difficulty provided a fun experience. "Demigod" is an otherwise standard Deity game where the AIs are only given their Immortal level starting units, in an attempt to bridge the gap.
Spoiler for players on Monarch or above :
You should add archery as a tech for the barbarians (if you don't, the AI will capture their cities very early). This cannot be done in the WB save file and must be done in Worldbuilder as follows:
Spoiler how to add techs to the barbarians :

If you're playing at higher level than Monarch, consider also giving them Hunting at Emperor, Agriculture at Immortal, and The Wheel at Deity.
Spoiler huts and events :
Note: The standard saves have no huts and have events turned off. If you want tribal villages and random events, choose the saves with "Huts" in their names. If you want huts but no events, select the Huts saves and use Custom Scenario to turn on the option that suppresses events.

First instinct is definitely to SIP and not look back, but maybe moving on the Stone is a good move? Takes a turn, moves away from forests and ivory and moves off of the river, but auto-connects stone, keeps both corns, grabs a slew of mystery tiles (most of which the starting Warrior can scout), moves further inland, and leaves a spot for a second city on the coast in case SIP would ruin seafood (or just share double corn, if nothing else). Is that worth it? Doesn't feel worth it to me, but I've been proven wrong before. As for the Warrior, I guess move the guy 1S? That should reveal the most tiles, only leaving a plains hill and a plains tile as undiscovered mysteries for the potential stone settle.

I'm really not sure what's best in this situation, SIP or SOS - Settle On Stone. What do the experts think

It's impossible not to think Pyramids here. The warrior can check some of the mystery tiles, but they don't look promising in the opening screenshot. I think the main benefits would be not having to tech the Wheel before building Mids (but you might want to anyway), and moving inland to block more land. Commerce does look limited, but China has fantastic starting techs so you can probably just go straight for BW, TW, and Masonry. Those are my initial thoughts anyway.
N

I think if Pyramids are the goal, then SIP is fine. Easy to get the wheel and hook up stone in time. However I like with these sorts of starts to build the Great Wall (and we are China here, so this is surely a hard requirement!). In that case, settling on the stone would make it more reliable to get it. That said, I think I’ll still ‘risk’ SIP. The quarry is a nice tile to work in the early game as well.

not sure... warrior south seems the best way to go. on the other hand, we may get more land by going inland and by the looks of the image that may be important. maybe waste a turn going on the ivory with the settler to check for fish. if there is, then settle on the stone and ivory would be for later. also, since it's a noble's club map there's iron in the vicinity. my bet is it will be to the west

Spoiler :
ok, played a bit yesterday. inmortal which is 1 above my peace of mind emperor. settled on stone. settled no cities to the south, 2 to the east and 2 more one grabbing a dry wheat(?) and fp and another grabbing fish and another granary type food... got great wall, pyramyds--->hannibal starts to plot. had a couple of axes out going for a barb city, couldn't get them back in time, but got 2 cold whipped axes and cople warriors to soak the impact. archers did their work pretty well. got a number of axes and took one city from him (my 6th). shaka, of course, starts to plot. also, justinian. placed every unit I could in that city (hannibal's), and next turn shaka was at the gates city still in revolt. thought i'd loose it. he declares next but gets teleported far!.3 turns to move everything I could. shaka attacked and failed misserably. hannibal was willing to speak so i gifted the city back for peace. had converted to justinian's religion, but he had plotted from before that, I guess. took the beg twice(!) and stopped plotting, not before moving a little stack to my border.
okey, situation. got a great spy wandering arround; shaka at war; don't want shaka's land, but maybe a city so that he doesn't get jumbos. currently 2 options: go with my newly made elepults and take one city from him or go to a barb one next to justinian and gift it for peace so that they may get on the wrong side of the bed. won't sign peace with either loosing lots of troops or city gft. my target is hannibal. he cleared the nice land off jungle and is weak, problem is he may get longbows. also, louie switched to the other religion and may be an issue
Last edited: Sep 13, 2022

Chinese starting techs are really good for such land, as people can go directly BW from T1 without sacrificing early growth. BW would probably finish by the time the Worker has farmed two corn, then that worker will be available to chop.

SIP is definitely good. But I slightly prefer to settle on the stone to avoid the risk of killing seafood. A city on the ivory would be nice to backfill and share a corn from the capital.

In terms of wonders and tech path, it's not a bad thing to keep the options open for a while, perhaps

? IND + stone surely makes people think about Mids or TGW. But given this coastal start, if the warrior finds several coastal spots to settle, GLH is a decent choice as well, especially with an IND leader. After 10 turns or 15 turns, the land revealed by the warrior might change our initial thought about the wonders and tech path. This start offers several possibilities and potential <-- another success in map creation of @ AcaMetis

Still in the middle of that Gandhi game (NC310). So this time I'll just watch

Well played. Surviving the two-front war against Hannibal and Shaka is already an achievement. Begging from Justy is a wise choice, too.

Sometimes PRO has its usefulness.

Spoiler :
restarted on emperor since it seemed a little hard to pull it off. got a dow by shaka, louis and hannibal. starting to think I suck at diplo
You must log in or register to reply here.

Nobles' Club 314: Justinian I of Byzantium