Other Enjoyable Civilization V Games (Immortal and below)

Nizef said:
So much for the friendly approach.

I would have liked to have declared friendships for the boost to great people production. Some of the distant AI's started denouncing me, and when I looked at the diplomacy report the only negative was "They have denounced us!" I think the denouncements were just to impress each other; I mostly ignored them. I sold them luxuries at a discount and I voted for most of their resolutions, and they weren't a threat. But it meant very few research agreements.

Rome and The Aztecs were obviously going for domination (that didn't work so well for Monty) and I was the next target. Plus I needed generals and admirals for that Nobel Prize thing.

I started #92 again last night. This time I settled my second city on the coastal desert tile to east and a little bit south (4 tiles from Rome.) I can use that city as a canal connecting the bay to the ocean, and it has enough fish and crabs to thrive in spite of the desert. Settled 2 more; one on the copper and one on the truffles. After getting the national college up (which was a little late because I was building Machu Picchu at the time), I settled a 5th city on the west coast. I don't think I'll finish it, but it's a totally different game. Rome has no tiles to get a foothold on my territory or even come ashore before declaring war. Theodora is still alive and doing extremely well, with lots of wonders. Oddly enough, she seemed to be ignoring religion but then beelined Theocracy and built Hagia Sophia to found one. I just bribed her to declare war on Rome. And I'm friendly with everyone, but I've been beaten to a lot of wonders that I should have built. By this time the first run through, nobody liked me for no obvious reasons, and my friends hated me -- well before ideologies kicked-in. I think even tho' Rome is friendly he's being deceptive and secretly hates my guts, but the Byzantines may take him out.

Interestingly Theodora didn´t get a religion in my game at all. All of the three far away got one and them Polynesia and me.

Nizef said:
OECG#93 In the Spirit of the Great Lakes

This time we play as the Iroquois on a standard sized Pangaea map. The level is Emperor and the pace is quick. The first thing that comes to mind is: is this really Pangaea? It is indeed but the shape is very unusual and already for that reason I think you should try out this game. Tha start is also among the strongest possible and in my own game I didn´t even SIP!! Tell me what you did. And the map has a lot of potential for watery activities, so I think it definitely qualifies as a game with the real spirit of the Great Lakes. Hopefully you will find this one as entertaining as I did. Have fun!
Click to expand...

Played this one last night. I settled in place. Hiawatha AI usually goes Liberty (sometimes Liberty *and* Tradition) so I decided to give Liberty a try for a change. Then Patronage, Rationalism, and Order. (I also almost never take Order) Before getting very far in the Order tree I switched to Commerce for the cheaper roads, more science, and the happiness from the finisher. Science victory on turn 273.

Pocatello settled a city way too close to me and then built the Great Wall. I declared war anyway and captured that city. I kept it as a puppet even tho' it had no luxuries because it was a lot of land. He offered me his other expo for peace and I took it; it was a good city so I kept it too, but its luxuries were not improved yet and my happiness dipped to -17 for a while, but I got it back under control without too many rebels to deal with. Eventually I annexed both cities.

This was a bizarre map. That's not a bad thing, just an observation.

I was able to explore the oceans by having open borders with Polynesia and slipping some caravels out through a canal city. And later I sent a submarine through the ice to the southwest to finish exploring. 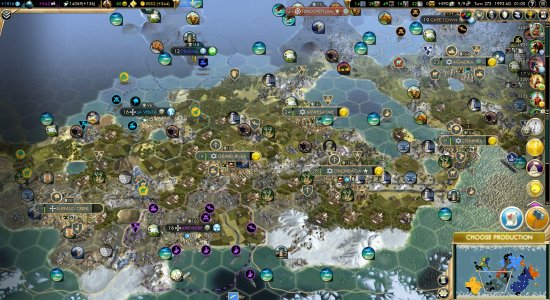 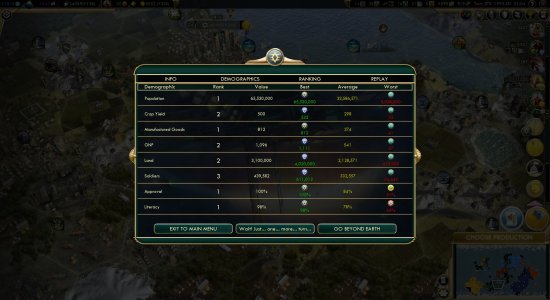 [BNW] Switching from Tall to Wide in Midgame?