Playing for a Time Victory

To me, playing for a time-victory is a different creature. I bet some of you have never played more than one or two time games, if any. So I thought I would mention some things I've learned. Hopefully, some of the high-skill players will chime in, too.

I created a game in IGE with the the gauntlets settings, and here's how the speed /map-size combo is going to score:

There are some others (tiles, cities following your religion, Great Works), but you can see the biggest score that you can easily control is population, with cities being second. So (contrary to generally accepted game theory), for this game you're going to want to pack cities as close together as possible. "Good city placement" goes out the window. You can plant a city on an arctic island that can only eat from a couple of ice-locked ocean tiles. If you buy the aqueduct, granary, lighthouse, hospital and medical lab, it will feed a lot more pop, which grows that citizen score. Put cities everywhere, and close together. I hate looking back at my map and seeing large gaps between cities that I had placed "properly". 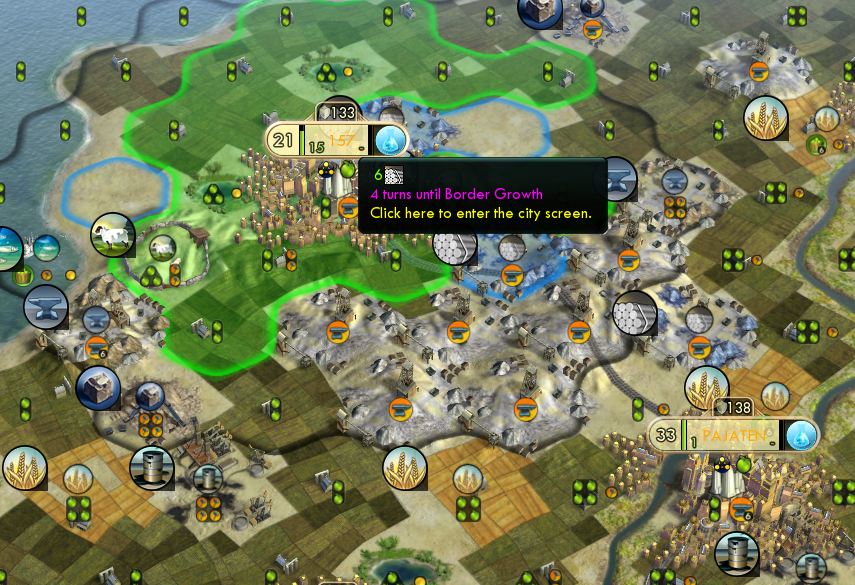 City #157 could have been one tile closer to Pajaten, then I could have planted another city on that NW farm tile. But I put it more "properly" next to the oasis, sheep, etc.

I eventually conquered ALL AI cities except one capitol (so as to not get a Domination victory). The earlier you get those cities, the earlier you can work on their pop-growth, but don't wipeout the AI too early, or you'll be fighting to not get a Culture victory.

I also conquered all city states. I saved the maritime ones for last, kept them allies as long as possible, for the food. But a few turns before the end, I finally took 'em all.

Great Works are 4 points, so I wanted to get an artifact from every Archaeology site. But don't get them early, or you'll fail into a Culture Vic. I had workers clear forest and jungle off all dig-sites, then parked an archaeologist there. They all wanted 5 turns to dig, so I started them digging on turn 1495. Their last digging-turn was 1499, the next-to-last turn of the game.

Also, be sure to take all SoPols in Exploration at some point, to reveal Hidden Archaeology Sites. IIRC, they can either be burned to produce culture, or they can give you a Great Work of Writing. (Looking at my game, it seems like I should have made more GW-Writing than I did, and the Civilopedia entry isn't clear about the choice, so not absolutely certain what the choices were, and what I then chose.)

All trade routes were internal. Maybe had a couple in the early game to get gold, but set them to internal ASAP. After getting my capitol large enough to staff the Specialists slots, I started sending them to cities that didn't have decent food of their own (e.g. those on tundra).

A couple of things I don't feel like I really figured out was burning Scientists, and assigning citizens and Specialists.

Not sure how to determine optimal Great Scientist usage, but I know I should have used mine sooner. At the end of my epic-large game, I had 50,377 science per turn, and Future Tech was costing 128,336 beakers, so less than 3 turns. But my GS burns were 726,352. I have no idea why so high, but I know I was wasting a lot of overflow. From each burn I would get the immediate "Future Tech", then overflow one or two more, then back to "21617 of 128336" or whatever.

After I researched all 80 techs, but was still planting cities (and - more importantly - trying to buy their buildings), I had cities building gold. Citizens were assigned to ANY available food. Hammer-only tiles were not worked until Specialists slots were filled. Specialists were prioritized to Factory, other production, gold, and then science. (Factory first, because Order "Workers' Faculties", build factories in half the time, 25% buff to science.) At some point my income could cover buying Settlers and a fully built-up city, so then I started working production tiles in favor of gold-Specialists. But I don't know that I ever was certain a played these decisions right.
si guerre soit, et a faire le bien q'il poet
(... if there is war, do the best you can)
Henry, Earl of Derby's orders at Battle of Auberoche, 1345

Awesome writeup! So many great observations and so much good specific advice.

The only thing I would add is that in most settings, Freedom is superior to Order in Time Games because population scores the most points by far. The more people your empire has, the higher your score will be. Techs, Policies, Wonders etc. are all a much smaller percentage of your score. The Freedom Policy Civil Society that allows your specialists to consume half as much food as normal citizens, allowing a large increase in population.

Order does have some nice city growing policies and can be competitive with Freedom at certain settings, but Freedom is probably the better choice in most Time Game situations because of Civil Society alone, as well as Universal Suffrage, which helps happiness a lot.
You must log in or register to reply here.

Civilization V Hall-of-Fame Update (for May and June 2022)