Currently in beta testing.
Here's a preview of the civ UP cards: 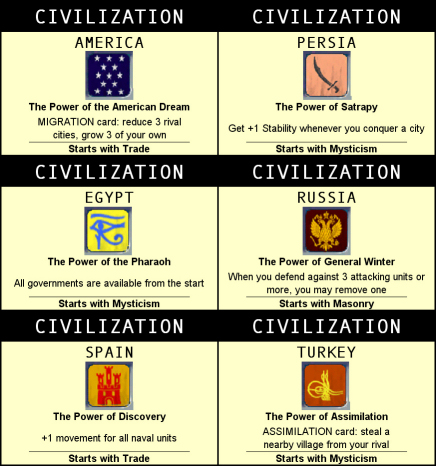 and of the Stability management panel: 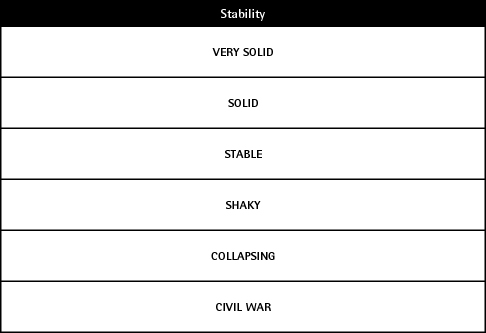 I want that game
Your political compass:

Sounds great! When is it coming out?
Author of: 1,100 A.D. on GEM and 1300 AD on GEM Soon to finish: 7th century A.D. on GEMSupport the Byzantines for RFC
"I looked into his eyes and saw three letters: a K, a G and a B." John McCain on Putin
It was a tough choice between 4 more years of republican jokes or Democrat jokes, but people want change! Lets finish ruining the economy and making the middle east hate the U.S. even more. That's change.
Ralph Nader supporter!

No Ukraine - No buy

I am 31 minutes too late to make a witty faux-naif comment.
W

Nice try, Rhye. But we all know stability is far too complicated a mechanic for a board game.
Addicted to Rhye's and Fall of Civilization.
UHVs won (1.186, Monarch): Egypt, Babylon.
S

I am shocked Rhye didn't announce a new version today: with Poland, Ukraine and playable Byzantines.

He created it. But he kept it for himself, since no one would have believed him
Your political compass:

"A time is coming when people will go mad, and when they see someone who is not mad, they will attack him saying, ‘You are mad, you are not like us.'" St. Antony the Great

You have a strange sense of humor, Rhye.

Whether or not you're serious, I think this is a great idea. I have a secondhand copy of Avalon Hill Civilization, although I've never played it. And if a boardgame-style RFC was implemented as a computer game with adequate AI, I'd play the crap out of it.

Heck, if any Avalon Hill-style game was implemented as a computer game with adequate AI, I'd play the crap out of it. I tried the official computer versions of Diplomacy and Axis & Allies --- BAAAARRRF, GAG, RETCH. Squad Leader was actually pretty good, although it wasn't much like the board game.

Oh yeah - and years ago, there was a shareware Macintosh version of Risk that I played quite a bit and was popular with some other people for a while. A number of years afterwards, I found out that a guy I had been working closely with for over a year was the author of that game. That was funny.
1. I started here and settled 1 SW.
2. This is a picture of me winning liberalism at 420 AD.
3. Here's my army of 50 Level 4 Cavalry at 660 AD right before I invade.
--Civahaulic

That would be so cool.

Can it be an april fool?
Your political compass:

Riker said:
Can it be an april fool?
Click to expand...

Rhye told us his super special awesome secret project on that one April one before.

The spoilered April Fools was a lie.

The cake is a lie

Rhye should mod Portal to add Ukraine
Your political compass:

Economic Left/Right: -9.00
Social Libertarian/Authoritarian: -8.15
You must log in or register to reply here.