I am a bit frustrated by this game because I can't even master prince difficulty on every game, so
I would love your support in a shadow game! It's pangea on prince difficulty. Here's the screenshot: 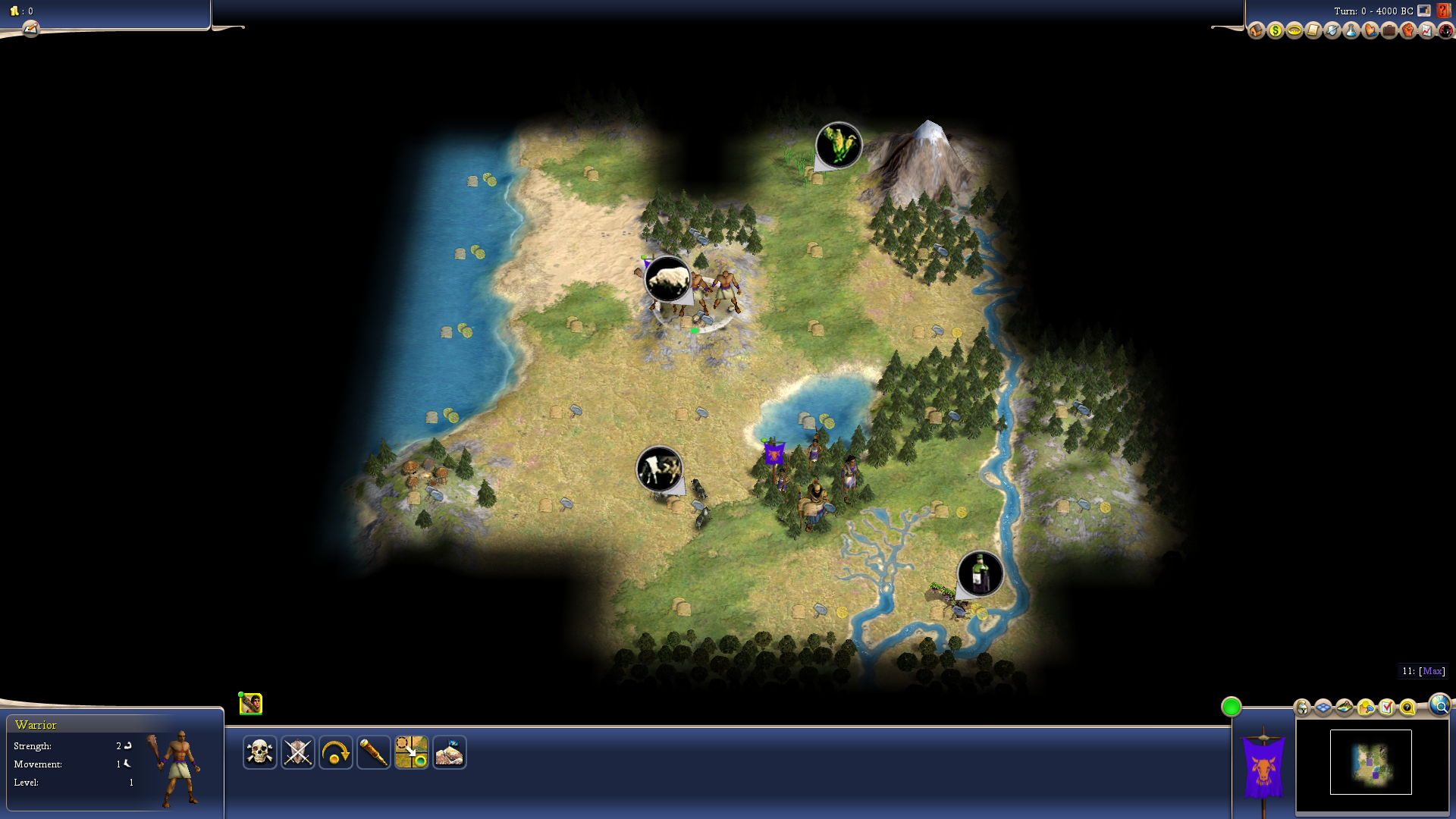 Let me know how to put the screenshot into a spoiler.
So I don't really like my starting position in terms of food income. Well with animal husbandry we would have two spots with 3 food. By looking at the shadows below, I can see moving south will reveal more plains, which is bad in terms of growth. Moving west would erase the bonuses of the cows, right? Moving NorthWest with the settler would be like bad cause it's not close enough to the shore to work those tiles properly and introduce a desert. Moving east would lose the sheep.

Based on this non-expert analysis the options I see is settling in place or moving 2N. This would cover Corn+Sheep+Cows and would give me more gras land. So in terms of food income / growth is better. But is it worth the one move? I would say so, what do you think? Do you have other suggestions? Based on this 2N possibility, I would move my warrior north-east to uncover more fog to make a better decision.

Warrior move not helping a lot here, since already a lot visible. Could move him W just to check for seafood since some may be orphaned by moving 2N, but I def think settling 2N is the best move. If there is seafood that'd be orphaned, then you can simply end up settling 2E of the sheep, which actually might be the best move here anyway.

At this point, for perspective and general advice, I'd worry not so much about "mastering" Prince level, but rather mastering the early game. Just focus on making better decisions in the first 50-100 turns.

civ4_asker said:
Let me know how to put the screenshot into a spoiler.
Click to expand...

ok thanks! How come 2E of the sheep might actually be the best move here anyway? So it might be better than 2N? Warrior did not reveal seefood so I settled 2N. 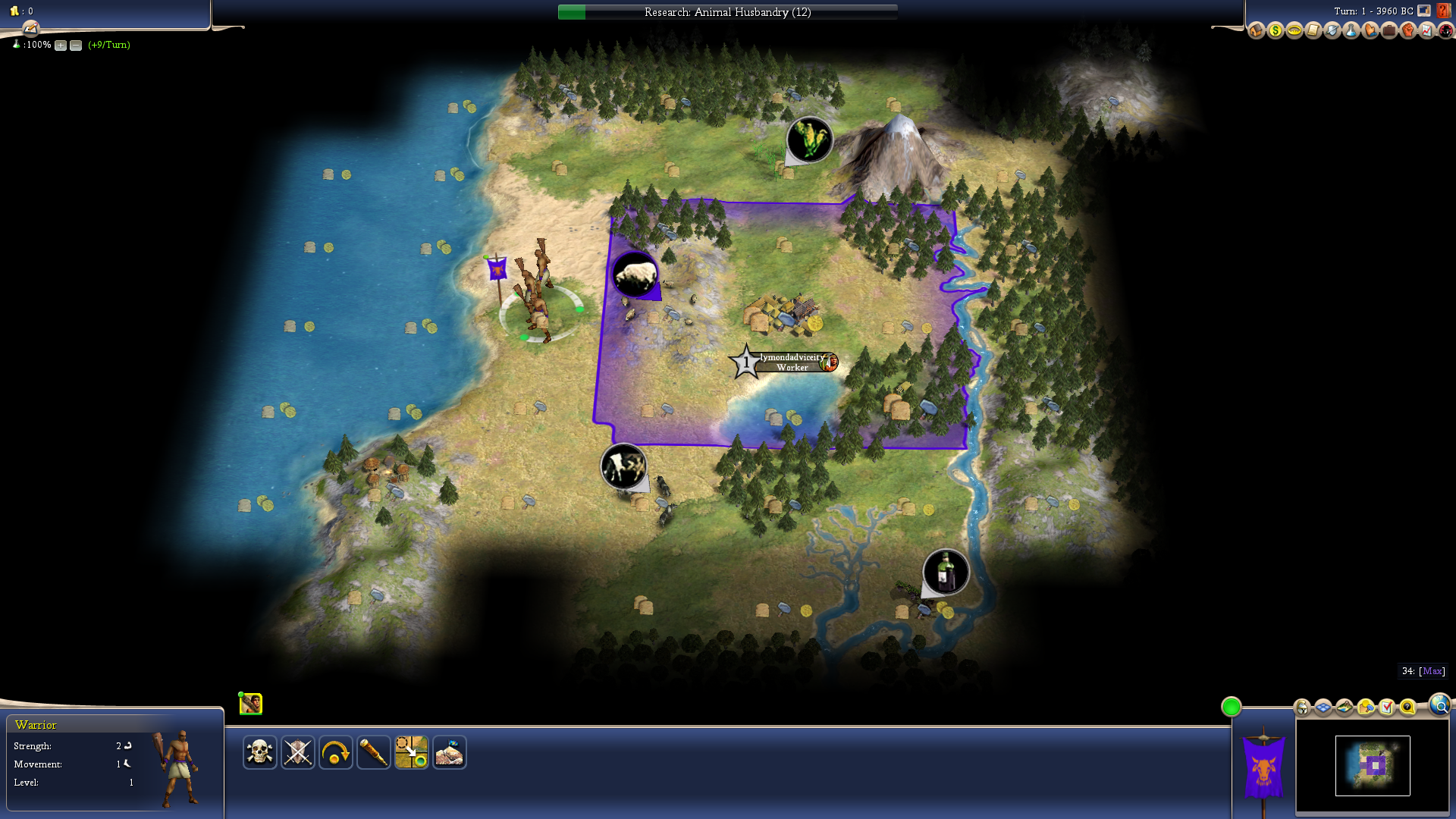 Now the choices are settler, warrior, barracks or worker. I think worker is probably the right answer. But I don't understand why not go for a settler right away? In terms of research I think Animal Husbandry is the way to go to work the Cows. What do you think?

2E of sheep might be best since it "only" loses the plains cow, and it gains river access, some more river tiles and a few mystery tiles that can contain goodies!
But with Gilga, river access isn't as important as you already have TW so you can connect cities anyway.

ok nice! So I chose AH and to build the worker. Worker is finished now. Hope it's ok I settled 2N or was that definitely wrong? 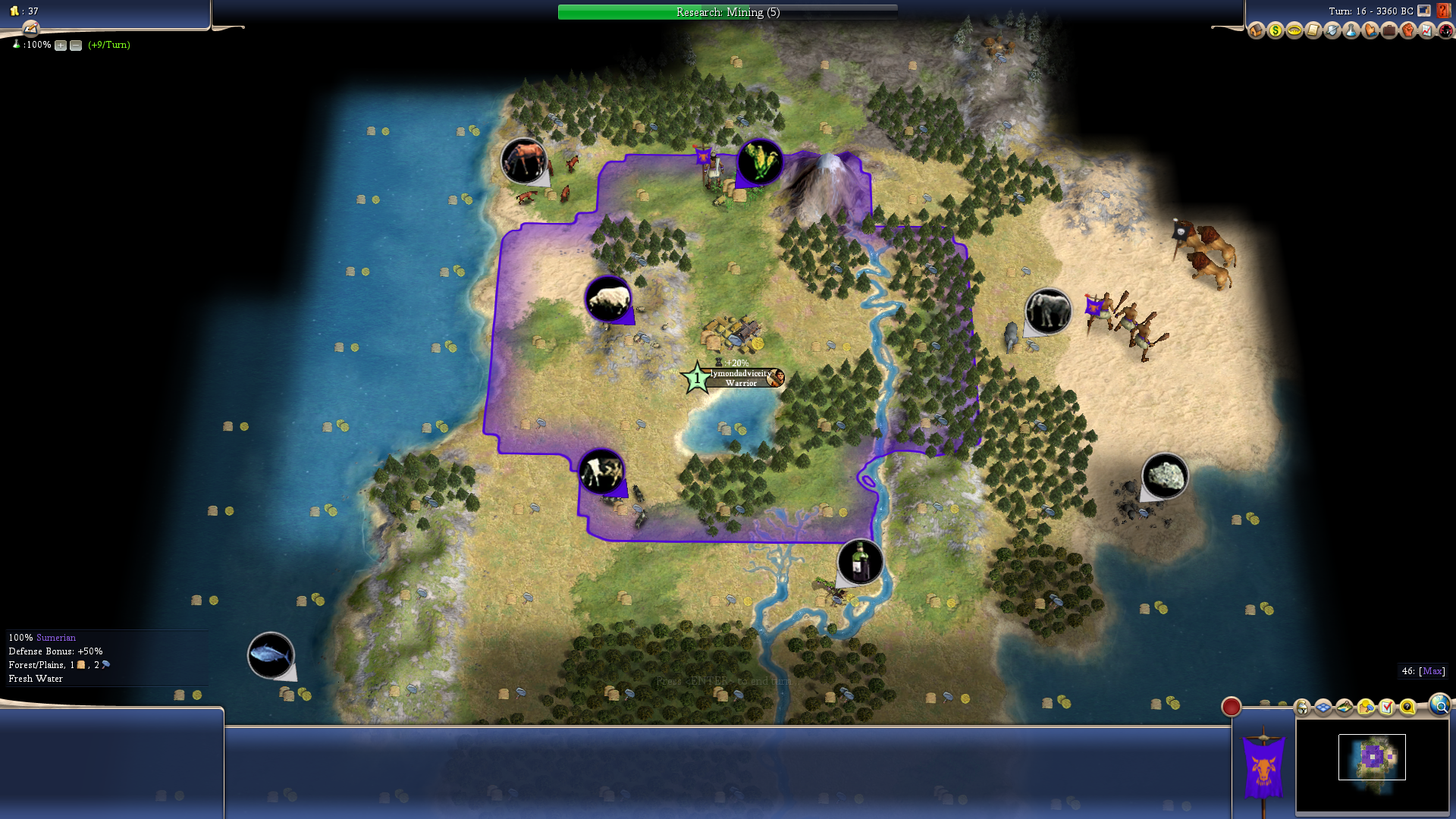 Now I guess the next tech would be mining, which also leads to bronze working? Also what do I build next? Quite clueless how to decide that?

You'll want to improve the corn, then sheep, then cow, most likely. Let your capital grow by building a warrior, and at size 3 you'll probably want to switch to building a settler.

Mining is good because it gets you to bronze working, and you have some decent chopping here. You'll want to chop a lot early to get your workers / settlers out fast.

Nope it's not wrong 2N, river access only comes into play here at Levees which are waaay too far in the future.

Settler first question: you can safely forget about that, very rare situations where it might be better than worker first.
Without improved tiles first, more cities are not worth founding.

At game start warriors after workers are usually the best build, or if coastal workboats.
Barracks you can forget like settler first

Those are built when you plan a war, which ofc is way too early now.
Warriors can secure areas (often called fogbust), barracks do nothing.

BW often comes after crucial food techs, so you can chop for production and use slavery (also production).
Good pick here.

Oh almost forgot, i see goody huts are on..in this case one scout before warriors would be best.
But no hunting.
Last edited: Sep 13, 2021
Beginner help guide for Civ IV

civ4_asker said:
Now the choices are settler, warrior, barracks or worker. I think worker is probably the right answer. But I don't understand why not go for a settler right away?
Click to expand...

The simple answer is that an immediate settler would take far too long to complete. With only the centre city hammer and a three yield tile to work you'll only be putting 4

per turn into a Settler. If you build a Worker and grow to size 3 while improving your best tiles, than you'll end up with 5

per turn into a settler, four times faster than building a settler at size 1. And in the process you'll have trained one or two Warriors that can scout for city sites and keep them safe from Barbarians, you'll have a Worker that can improve tiles and/or road your next city location to get a trade route connection and/or get their faster, you'll be in a much better position to get out more settlers and workers faster, research speed should be better if you're working tiles that generate commerce, etc., etc.

ok thanks, sittingdown, will do corn, then sheep then cow like you suggested and will build the warrior to let the city grow and do mining, then BW.
Thanks AcaMetis for the detailed explanation and Fippy for the reaffirmation that settler first is extremely unlikely a good move. 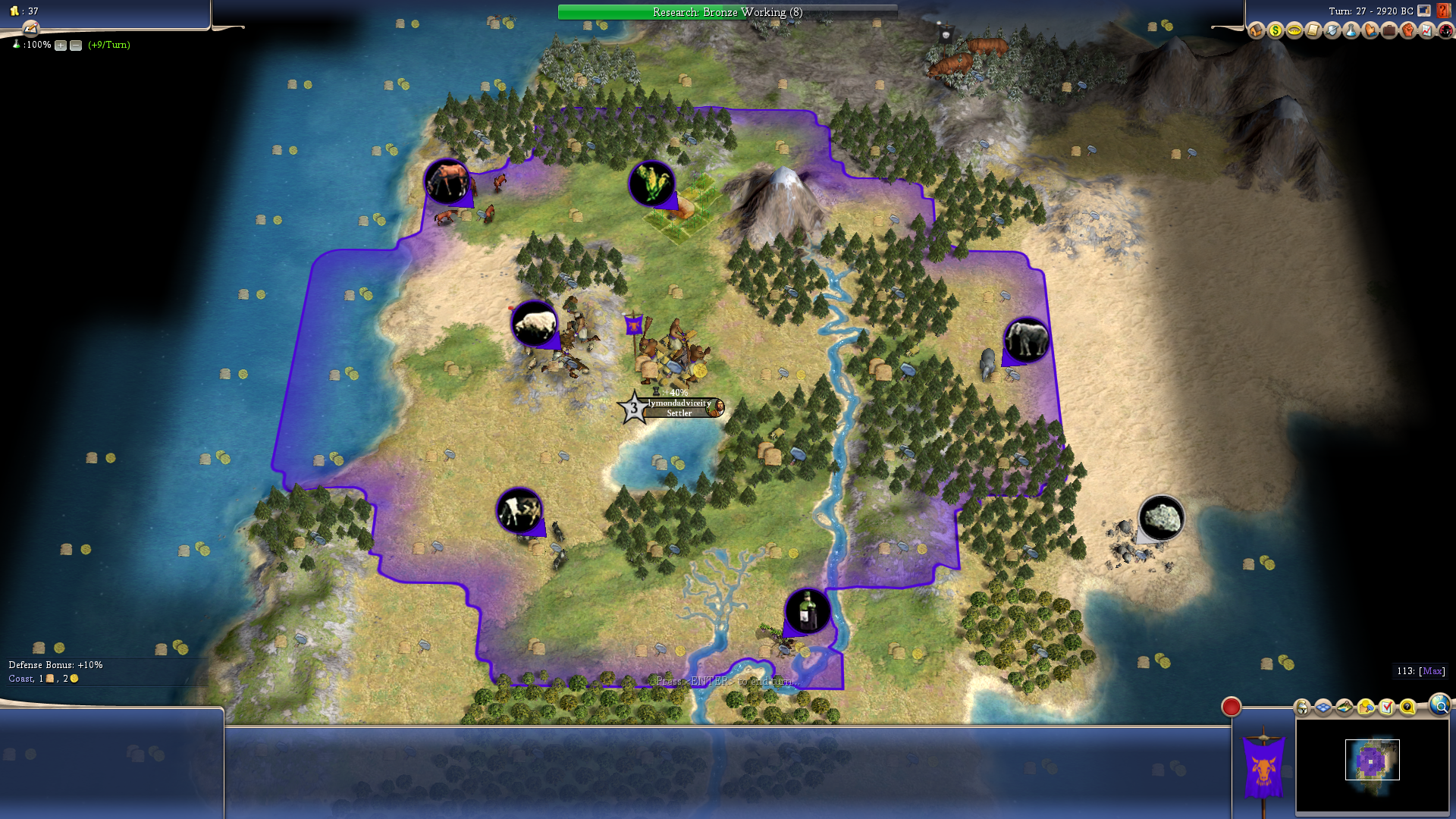 ok so after POP 3 will switch to settler, right? Unfortunately, the pasture was destroyed by an event and need to be rebuild. Oh by the way, why settler after POP3 and not POP4?

Scout would be a good idea, no nasty barbs from goody huts iirc. Hunting gives access to ivory which will come in useful at some point, on the other hand hunting + BW stops you building warriors so delay hunting until you need the happy and have ivory inside your borders.

Really need to explore a bit more before deciding on any kind of dot map but you've got time for that while growing to pop3/4 (pop3 comes earlier but pop4 enables double whip into settler)
Do not despise the pig for having no wings, for who is to say it will not become a dragon

Depends. Minimum 3, because you only have 3 strong tiles. The 4th tile will not be a good tile. Though 4 is an option if you want to do a 2-pop whip. I'm not sure what's optimal as far as chopping and working your best tiles vs whipping away one of those tiles for a couple of turns. Also depends on how many warriors you need for fog-busting. On prince - you're pretty good on fog busting, though it looks like you're isolated at this point, so a few extra warriors can't hurt.

For reference growing another pop to work a 2

tile will only contribute 1

to the settler build, since that pop consumes 2

. Very inefficient, better to just build the settler at pop 3 in that case, or use the fourth pop to 2-pop whip the settler to completion. Or 2-pop whip a Worker and chop settlers out, whichever way works best.

(keep in mind though that most here do not play with huts and events, so would not be advising a scout otherwise)

ok thanks for the tips! So I did go for settler after pop3, as mentioned the pop 4 only contributes one hammer. What do I research after BW? (I already have pottery through a villiage and animal husbandry). I chose writing but I can revert back to a better tech of course. 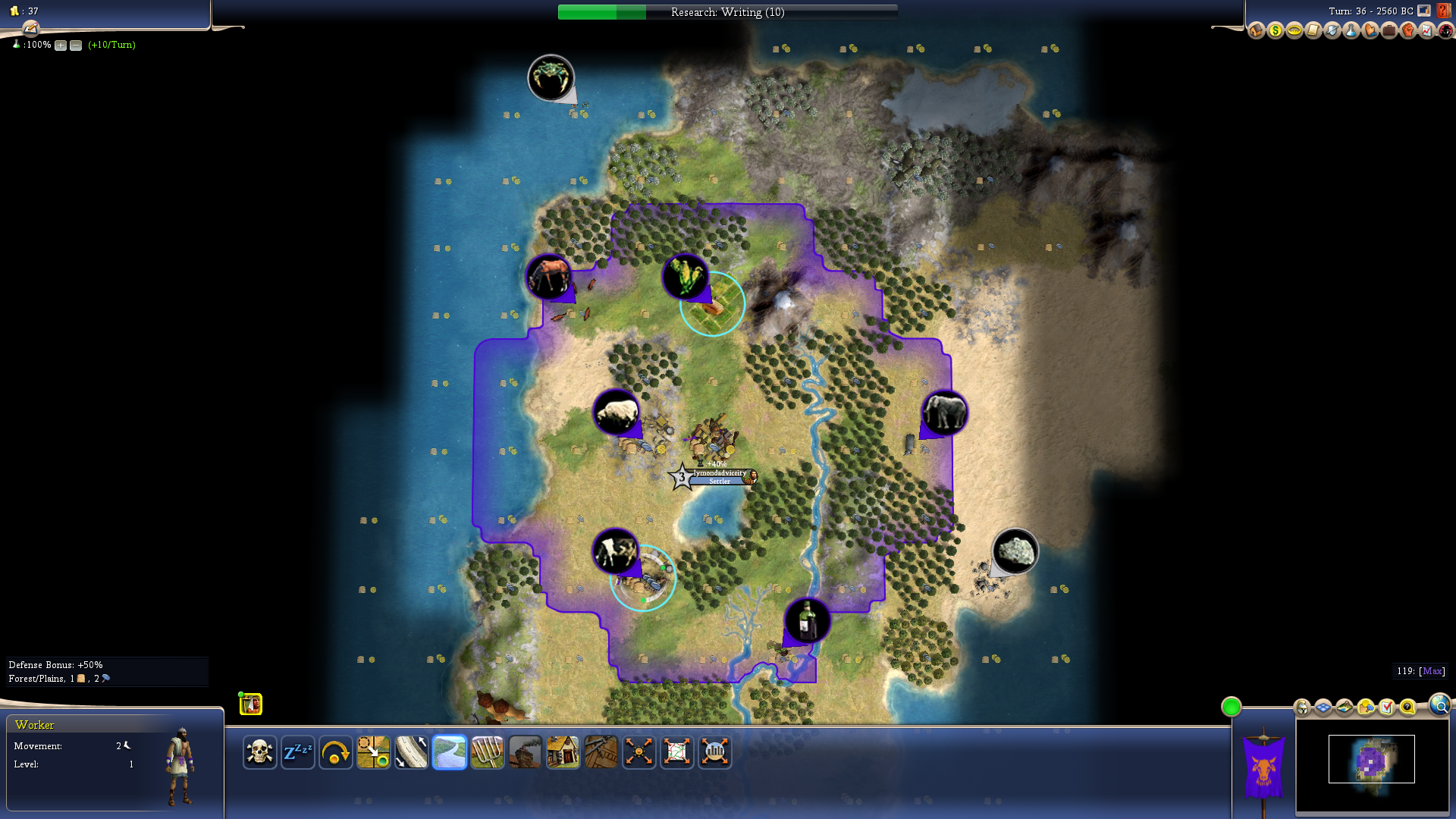 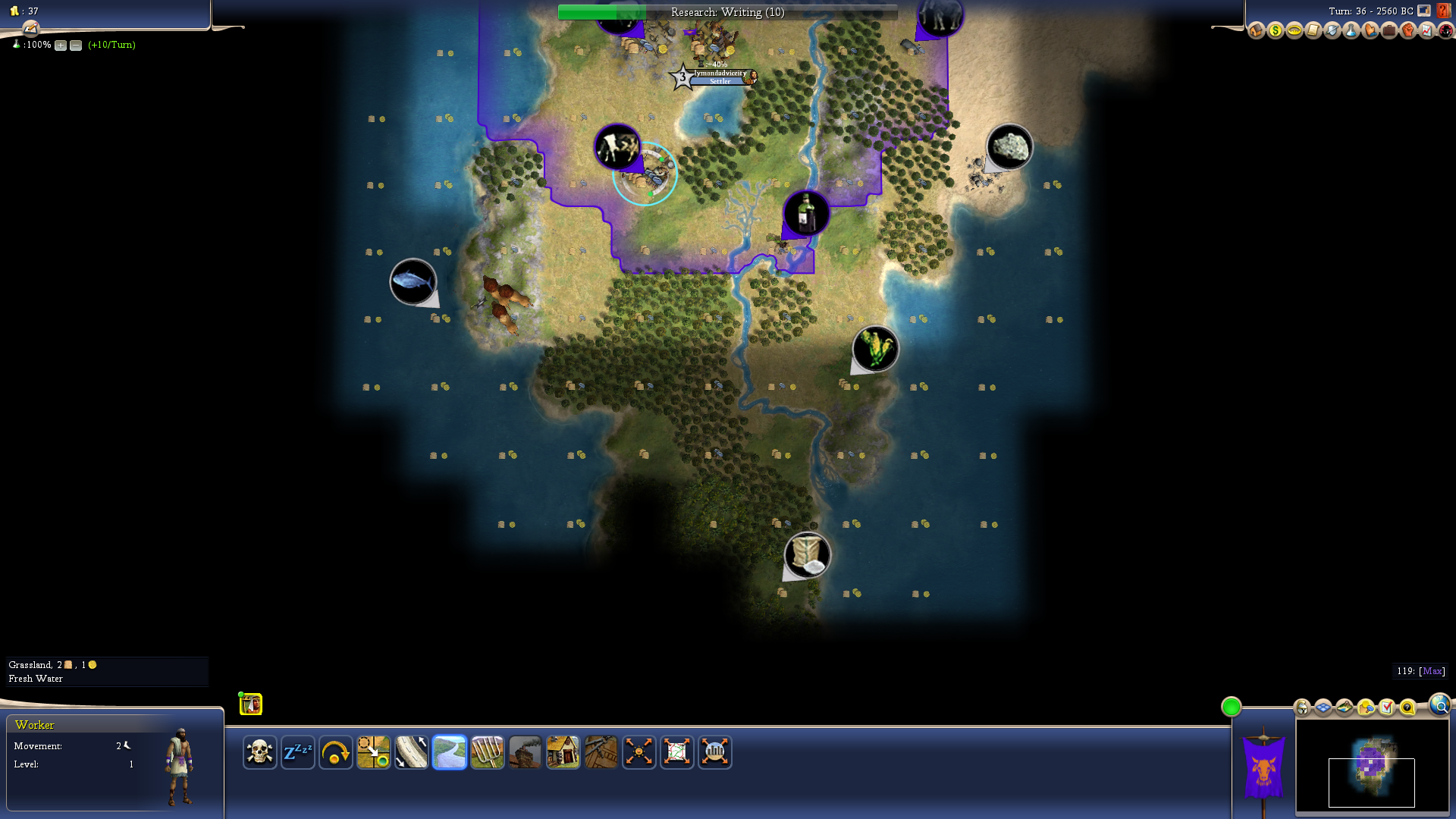 In terms of placing the settler, I am a bit clueless. N and E to my capital are tundra or desert, so bad spots I believe. Someone said it's important to think about the next 5 turns of a city or so. In that regard the fish spot would be worse than the corn spot as the corn could be upgraded by the worker right away ...
Now if I focus to have the corn inside my city on startup to work it right way, this leaves a couple of options:
2N of corn would give me stone, corn, wine and the cows could be shared with capital. it gives also 7 Grassland tiles, of which 2 are mountais. It is also a shore city.
NW to corn would even have 11 grasslands. Even better in that regard. It would have wine and corn.
Going W to corn would lose 1 Grassland and introduce 1 more shore tile which I believe long term is not a good tile as you can't upgrade it.
Going SW would introduce even more shore tiles.

Judging this, NW or 2N or corn would be my favourites. Maybe NW a little better long term and 2N short term because of the 4 resscources.

Which spot would you pick?

Grab corn + stone, fish and crabs with your first four cities.
Looks like your oppponents are far away as you havent met anyone, so great wall is an option.
Also Pyramids looks good.
If you dont build great wall, it looks like there is lots of room for barbs so dont forget barb defenses.

So I would go southwest of stone and tech masonry and build a road to the stone and build greatwall in cap.
It will be close but you can probably get it on prince.

1n of corn makes a really strong city, and yup river corn usually has priority over other tiles (like fish).
Pyramids are really strong in isolation (which you might be), lousy desert there but 3rd ring for stone would be acceptable with Cre.

x-post, but i don't agree with TGW much

ok thanks for the tips! Which effects make 1N of Corn or SW to stone better than 2N or NW to corn?

I like pyramids and wonders in general. With pyramids I could switch to bureaucracy quite quickly to boost the capital - which if you have only a few cities in relation is a great boost. But I heard wonders in general are not a good idea? How come pyramids in isolation are better than usual? Also great wall, is it that important? I mean on prince barbarians are not that kind of a problem or not?