After the "Babylon" release a few weeks ago, work on C7 has continued, towards the "Carthage" milestone. Carthage is currently slated to be larger than either Aztec or Babylon in terms of number of changes, so we also don't want to wait until everything is done to share the results.

What will be going into Carthage? Based on the limited feedback received in this thread, we have 10 high-level categories of improvements planned, listed in order of current completion percentage:

As a few categories now have substantial progress, we thought it appropriate to make that available. The categories below Tile Visibility all have 15% or less progress, and below Architectural Improvements have not been started, so I've left off the percentages for those.

We've also made some usability improvements for moving units, which although not in the initial list of improvements is likely to be appreciated, especially by those who don't have a Num Pad.

You can download C7 for your platform of choice (Windows, Mac, or Linux) from the GitHub Release page.

One main addition has been the right-click menu, added by @Flintlock . This takes two forms. One is allowing you to select units from a stack:

Of note, you can also Shift+Click on items in this list to select multiple fortified units without having to re-open the menu each time. If you're like me, you might not have ever realized you can do the same thing in Civ3! Watch out GOTM 186, with this newfound knowledge the competition level is sure to increase!

The other, activated by Shift+Click on a tile with a city, allows you to change what a city is building:

This key ability lets you customize what you are building, and for the time being would give you a significant advantage over the AI. But it's also a core element of the 4X genre that was missing in Babylon, and is not anymore.

Finally, pcen added the ability to Wake/Fortify all via the right-click unit menu.

It is now possible to load C7 JSON files, as well as Civ3 BIQ and SAV files, to start a game. pcen contributed this work, and both he and @Armageddon1 made improvements to the save format as well.

This means that you could open the c7-static-map-save.json file that ships with C7, make some changes, and load up the modified version, while not having to overwrite the original.

Another key improvement is enhancements to moving units made by @Armageddon1 and pcen . These allow moving units via the arrow keys and the fn key (for diagonal movement) on laptops, and using the Go To button with the mouse. If you don't have a NumPad, these changes will significantly enhance your ability to play C7.

Various smaller improvements have also been made. @Quintillus has taught the AI how to keep track of tile visibility, and how to use its explorers to expand that visibility (tile visibility for the human player will be added in a future release). @Flintlock has made several improvements to unit animation, and @Quintillus has made the terrain displayed on the info box dynamic. And behind the scenes, work is in progress to improve our logging of information (and thus ability to debug), and to improve our documentation in general.

We've also made thematic changes, starting with new main menu art, which now features Dido Building Carthage, also known as The Rise of the Carthaginian Empire, by JMW Turner. You'll also be playing as the Carthaginians, and may find the Romans nearby. See if you can use the new ability to change city production to defeat the Romans at Lake Trasimene or Cannae, but make sure you don't let them defeat you at Zama! 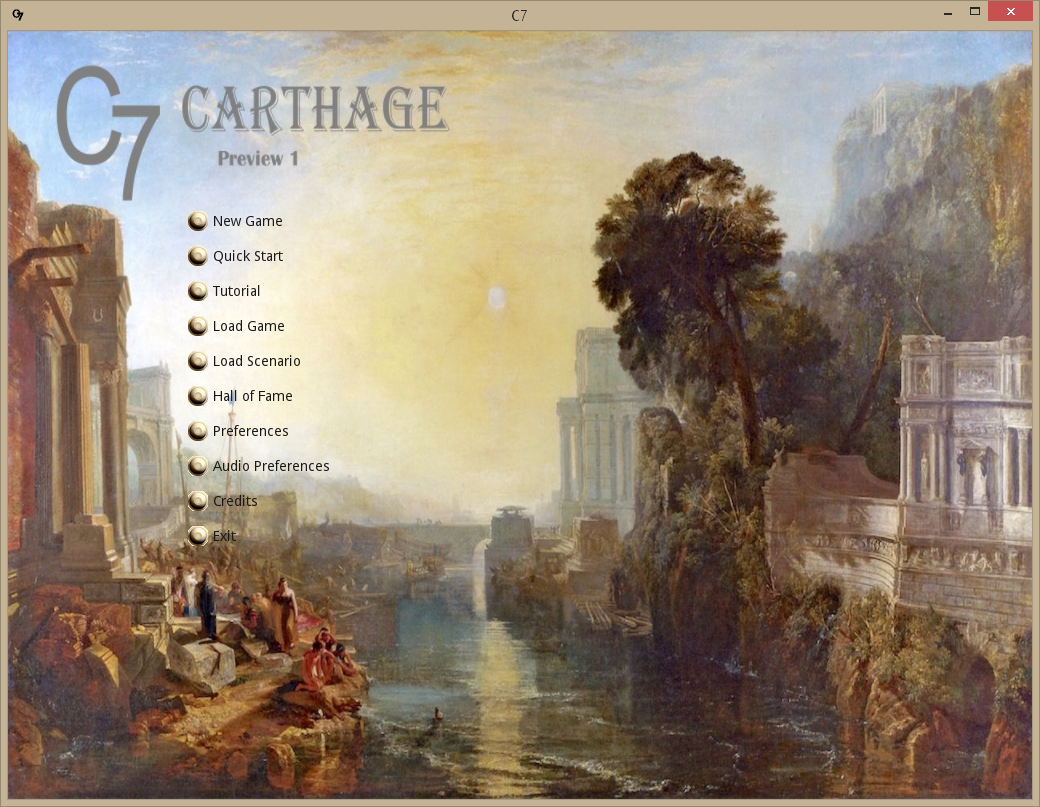 Sub-tasks for the high-level goals mentioned at the beginning have been mapped out, and you can view them at https://github.com/C7-Game/Prototype/projects/3 .

The exact order of what will be done next is not predetermined, but the goal is that there is plenty to choose from that will contribute towards the greater "Carthage" release. The second "Carthage" preview could feature full-fledged Tile Visibility, or it could feature Combat Part II as a marquee feature; it all depends on what sounds most inspiring at the time someone decides to make their next contribution.

Despite this progress, we're only an estimated 20% of the way to the Carthage release. Thus, one of our questions to you all - would you find the above progress enough to make you want to play an interim release? Or would two and a half or five times the number of enhancements - larger but less frequent releases - be more to your liking?
Don't lose your grip on the dreams of the past. You must fight just to keep them alive.
C3C Cross-Platform Editor Version 1.44 | Civilization III Community Scenario DVD
Civ3 Stories & Tales: Conquest of the World (2007), The Space Race (2008), Wrath of the AI (2009), Scientific Anarchy (2018, updated 7/16/2022).

C'mon folks don't all chime in at once!

@Lanzelot or @Laurana Kanan could you please sticky this and unsticky the one for Babylon? TIA

Gave it a quick whirl.

I would probably recommend posting larger updates less often - Civ3C&C is a very slow-moving forum nowadays as it is. If traffic starts to pick up however, smaller more frequent updates would be better.
Units: Complete|Previews/Questions|Requests - Modern/Ancient| My Tech Icons
Scenarios: AncientGreece|Indo-Greeks|Industrial Espionage|Escape From Zombie Island 0|Cold War Africa/Test|WH40K Team|Random Map Mesoamerican
A Guy Can Dream...

Location
In Mordor, where the Shadows Lie...

Just saw this project! I remember a thread like 3-4 years ago with some pretty active discussion about a civ 3 clone that went nowhere, absolutely amazing to see such progress.

I think it would be great if it was given its own sub forum under C&C rather than being in the projects sub forum, as it is buried so deep I hadn’t noticed it while lurking.

I’ll take a look at the GitHub, but I’d be interested in starting to contribute to the project in the coming months.
Ceci n'est pas une signature.

Sorry this hasn't got many replies. We're deep in a niche of a forum here, but trust me the work you're doing is amazing!

Aiken_Drumn said:
Sorry this hasn't got many replies. We're deep in a niche of a forum here, but trust me the work you're doing is amazing!
Click to expand...

Sorry, my friends - Surreal Life has me tied up in knots

and probably will for a few weeks more.
‘My name is Ozymandias, king of kings:
Look on my works, ye Mighty, and despair!'


An Intro To & An Encyclopedia Of Modding
"Da Rules Explained" (C3C's Rules Well Explained) -&- The FUBAR (What's Wrong With) the C3C Editor's Documentation
The Big Question - How Does The AI Choose Which Units To Build?​

Things are happening, despite the silence here - we're chipping away at some boring but essential stuff below the surface, like logging and unit testing and file organization.

Indeed, I was pondering last night the question of, "how close are we to where we should release Preview 2?" The vote is slightly in favor of a similar cadence, but only slightly, which leads me to think "a little bit larger, but not a lot" is the right cadence.

Preview 1 was 20% of then-known progress (14/70 items done), and those 14 had a high degree of user-visible improvements. We now have 82 items planned for Carthage (there are always more discovered as you go), and 30 are finished, or 36.5%. "Slightly larger" might have originally meant 50%, but the same 20% interval but of a bigger whole might make sense.

As for what's cooking, in addition to the behind-the-scenes stuff, the most visible items are city production being based on tile yield, and a lot of improvements to the combat mechanics (some of which are soon-to-join-the-finished-ranks). Semi-behind-the-scenes work includes starting to build out a flexible AI system (with various components that interact with each other) that will hopefully eventually lead to intelligent and emergent behavior. But for Carthage Preview 2, don't expect a cunning AI that will defeat you on the field of battle - just one that is slightly better at knowing when to build Settlers.
Don't lose your grip on the dreams of the past. You must fight just to keep them alive.
C3C Cross-Platform Editor Version 1.44 | Civilization III Community Scenario DVD
Civ3 Stories & Tales: Conquest of the World (2007), The Space Race (2008), Wrath of the AI (2009), Scientific Anarchy (2018, updated 7/16/2022).
You must log in or register to reply here.